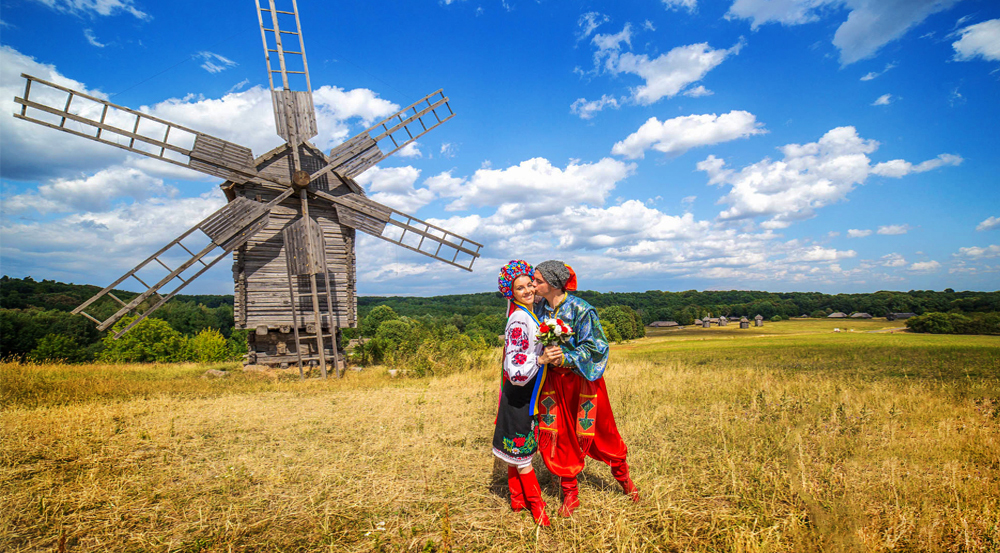 Kiev is so rich with wonderful places, architectural monuments and remarkable sights that it’s impossible to see all of them during one walk. This route is intended for three days and is perfect for standalone sightseeing tour of the City of Kiev. You can both follow the proposed route and combine it at your discretion. If necessary, you can make your own sightseeing tour for one or 2 or 3 days that will include the best sights that are worth seeing in Kyiv. In any case, it will be interesting and you will enjoy it. Do you want to get to know where a tourist should go and what is worth being seen? Then let’s go!! Get ready to experience a truly remarkable and unforgettable adventure! Welcome to the city of Kiev!

Although St.Volodymyr Cathedral is not so ancient, it is a truly sacred landmark of Kiev. The paintings inside the cathedral are of tremendous artistic value; the main part of the frescoes is executed by V. Vasnetsov. 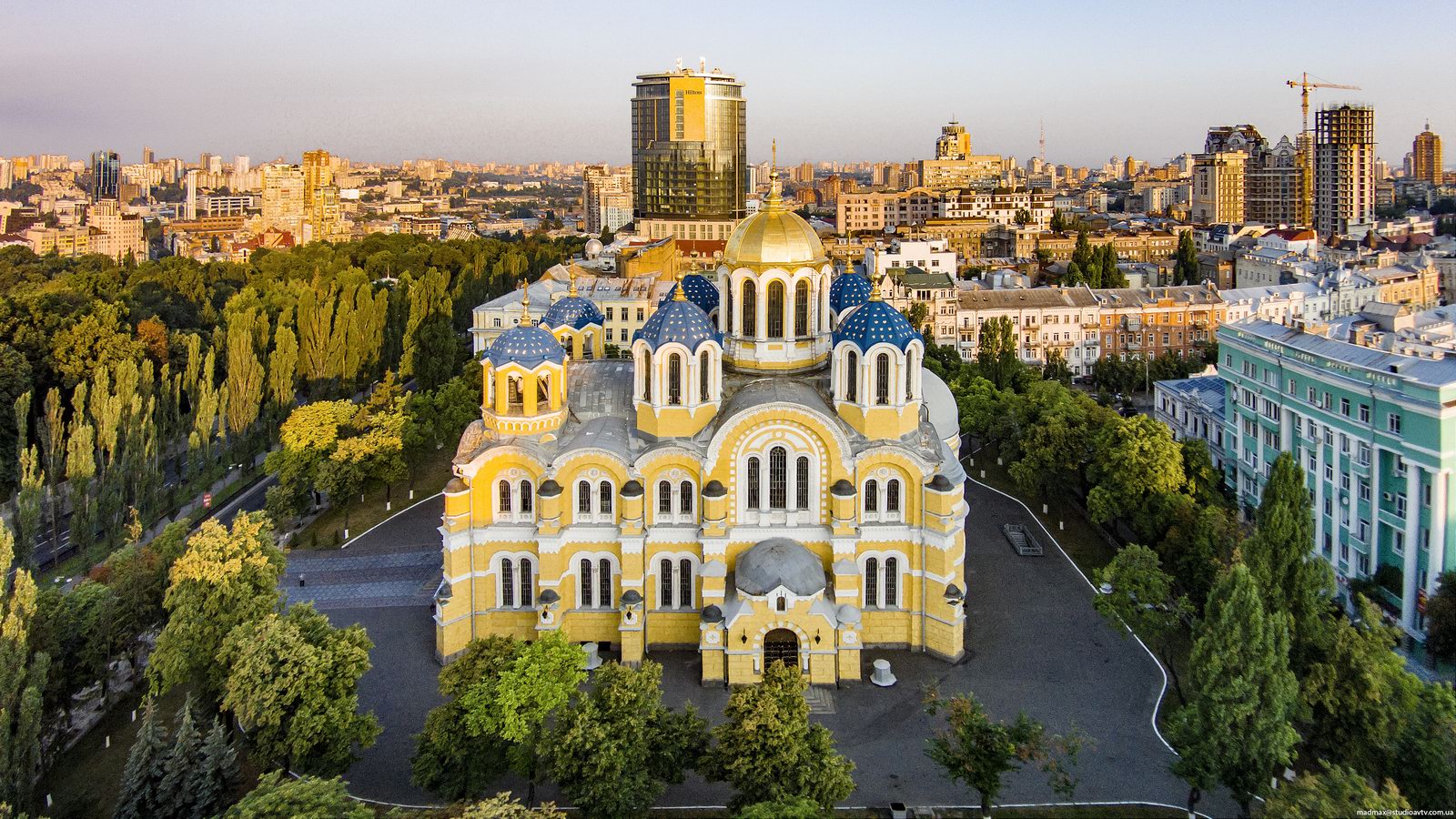 The building in the style of the French Renaissance was built in 1898-1901. It is in this theater in 1911 right in front of Tsar Nicholas II and the public, Russian Prime Minister Stolypin was mortally wounded. 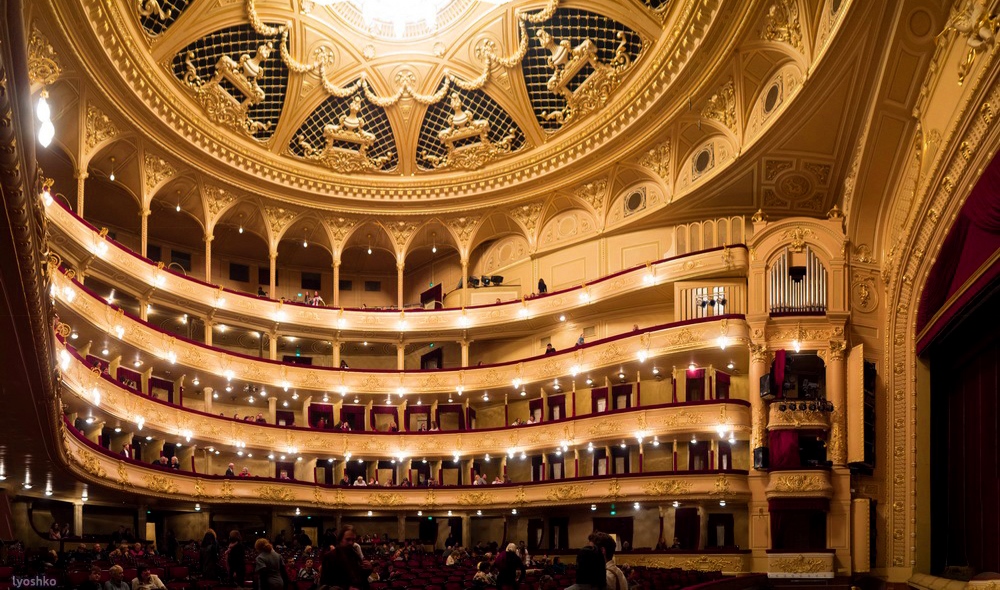 The main entrance to Kyiv from the time of Yaroslav the Wise. Next to the gate you will see a monument to Yaroslav the Wise, who is holding a model of the church of Saint Sophia. And in a nearby square, you can find a sculpture of a bronze cat Panteleimon; put some coins under his paws, hold his tail and eras and make a wish. It will certainly come true! There is also a very beautiful cast-iron fountain in this square. 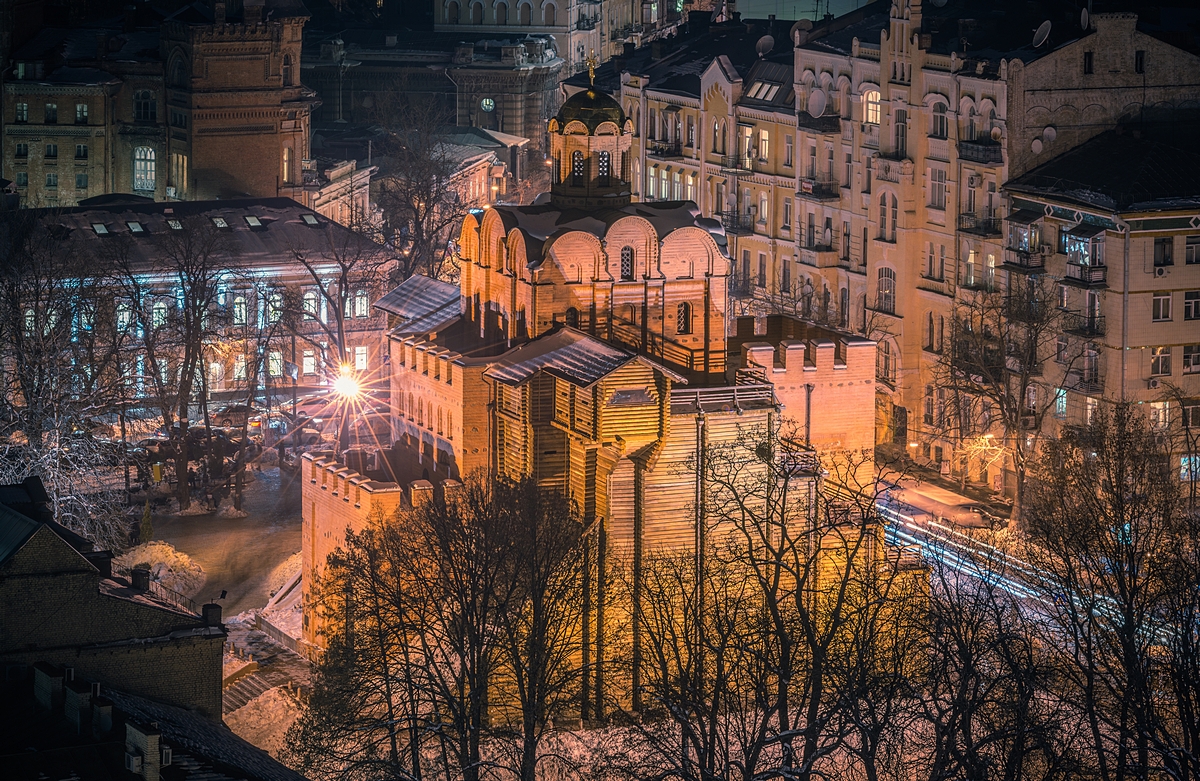 The complex is located on Sophia Square, where you will also see the equestrian monument of hetman Bogdan Khmelnitsky. The most famous building of the complex is the St. Sophia Cathedral, which has preserved many old frescoes and mosaics. It is truly surprising that artists in XI used 177 shades of colors to create mosaic images. 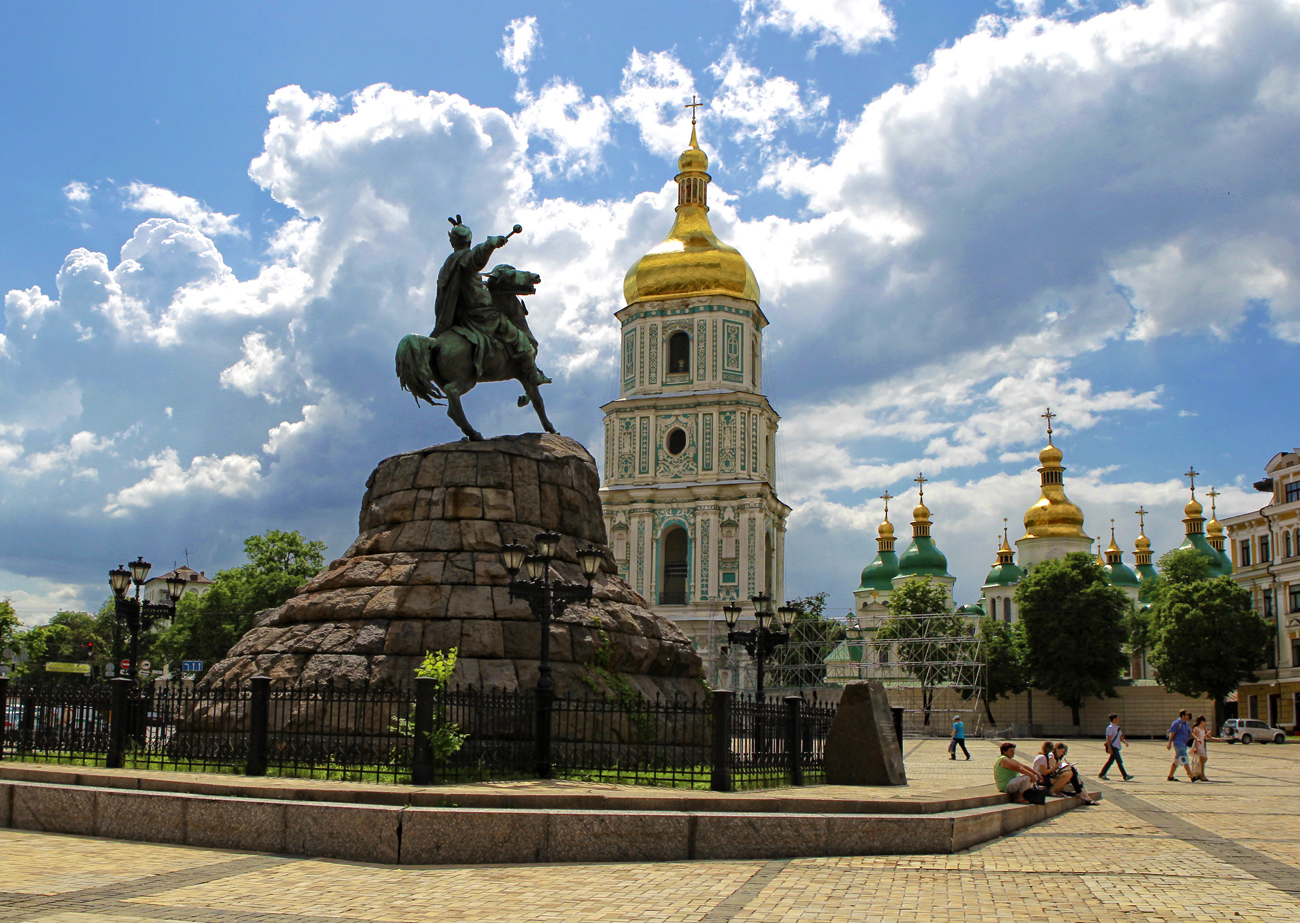 The cathedral, located on Mikhailovskaya Square, was erected by the Prince of Kiev Svyatopolk, the grandson of Yaroslav the Wise, in 1108-1113. Unfortunately, in 1937 the cathedral was destroyed, since the unification of the Sofia and St. Michael’s Squares was planned. And only in 1997-1999 most of the monastery complex was rebuilt. 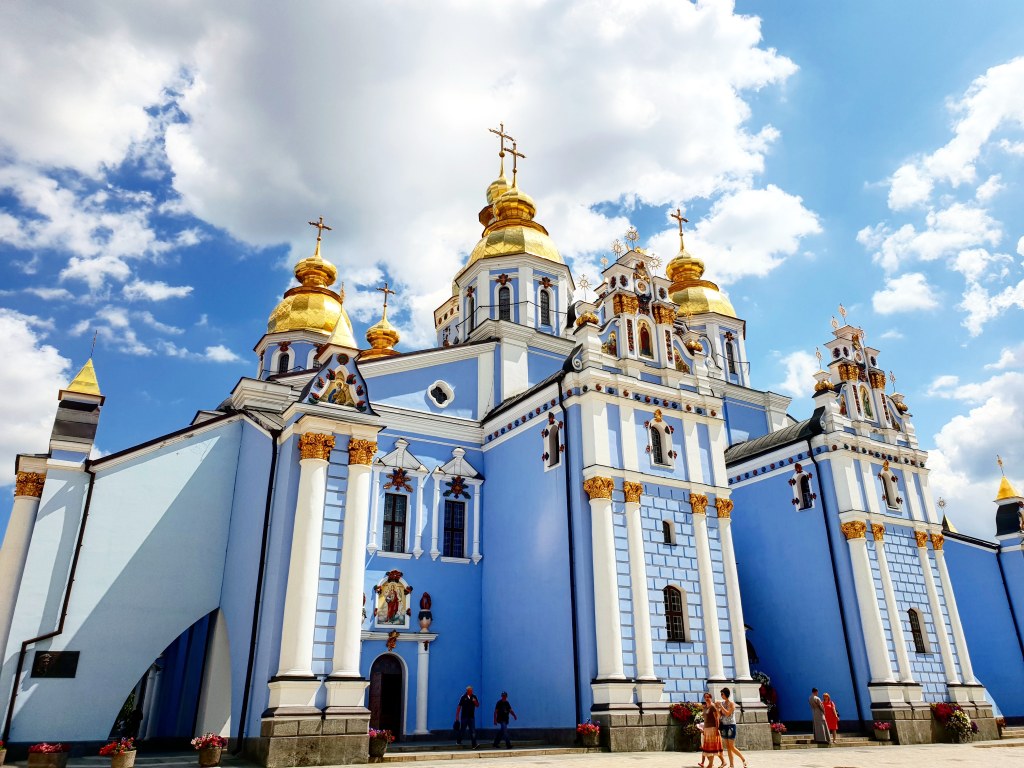 6. The building of the Ministry of Foreign Affairs, the former First non-classical secondary school and the monument to Princess Olga

The first opening of the monument to Princess Olga performed by the sculptor Kavaleridze took place in 1911, but already in 1919 the Bolsheviks dropped the princess from the pedestal. Only in 1996 the monument from white marble was restored and returned to its rightful place. 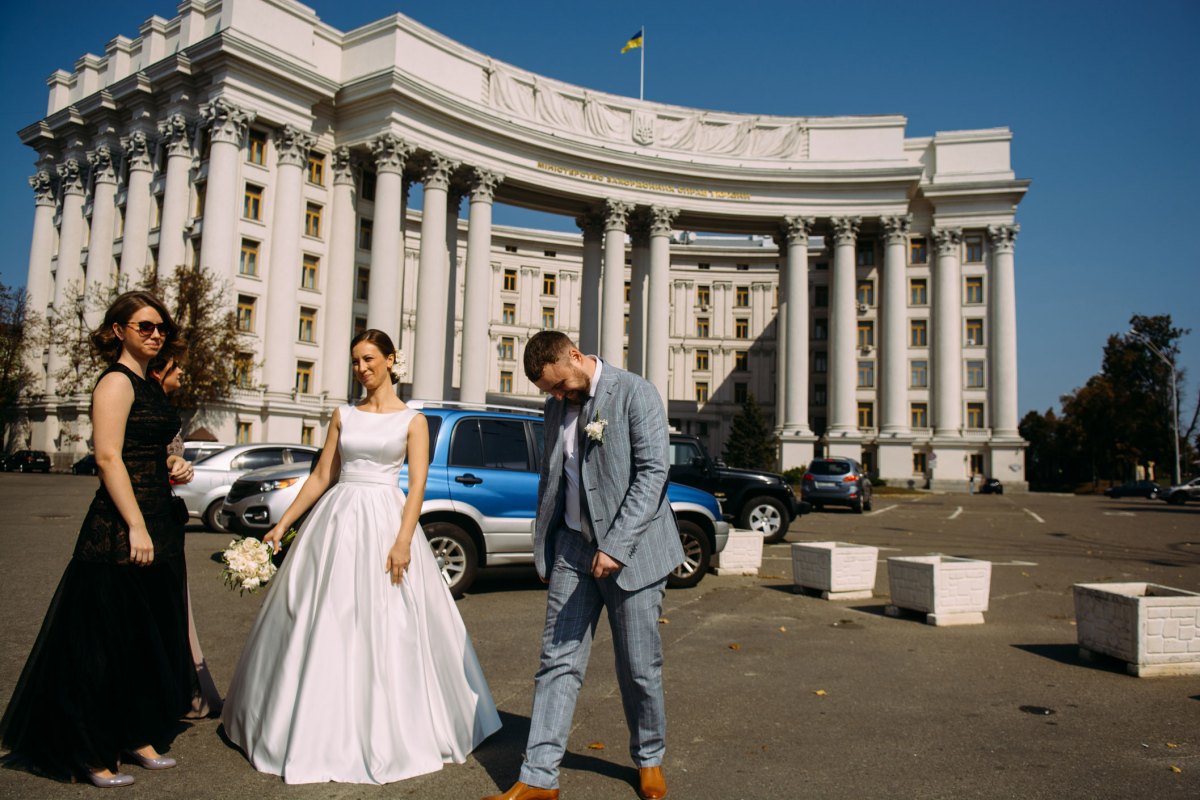 Here you can relax and admire the views of the Dnieper. In the center of the park there is a monument to Prince Vladimir, which is very beautifully illuminated in the evenings.

The station is located near the entrance to the park Vladimirskaya Gorka. On the funicular you can go down the Postal Square to the river station, from where you can go on a river excursion along the Dnieper or simply walk along the embankment. This is where our self-guided tour of Kiev ends today. 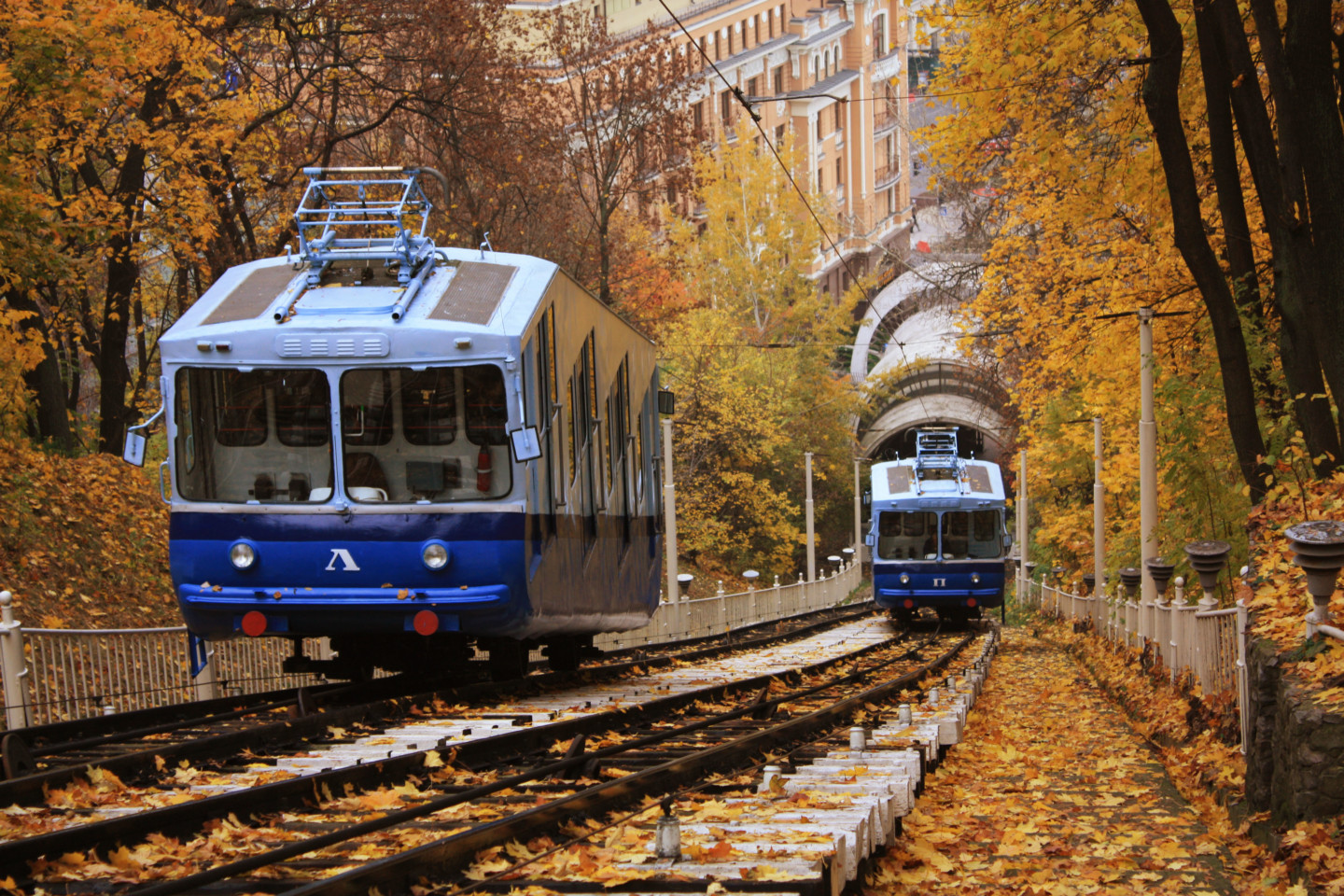 9. National Museum of History of Ukraine

In the museum you can see the exposition on the processes of the development of society in Ukraine, tarting from antiquity to our time. The area around the museum is the oldest part of the city, it was here that the city of Kyiv originated. The inscription on the stone next to the museum says that from here “the land of Rus started”. Be sure to take a walk along the Landscape Alley, where you will see not only the most colorful and unusual playground, but also wonderful views of Podol, the Dnieper River and the mountain Shchekavitsa. On the way to the museum, on the corner of Desyatinnaya Street and St. Andrew’s Descent, do not miss the unusual sculptural composition Pronya Prokofievna and Svirid Golokhvastov. 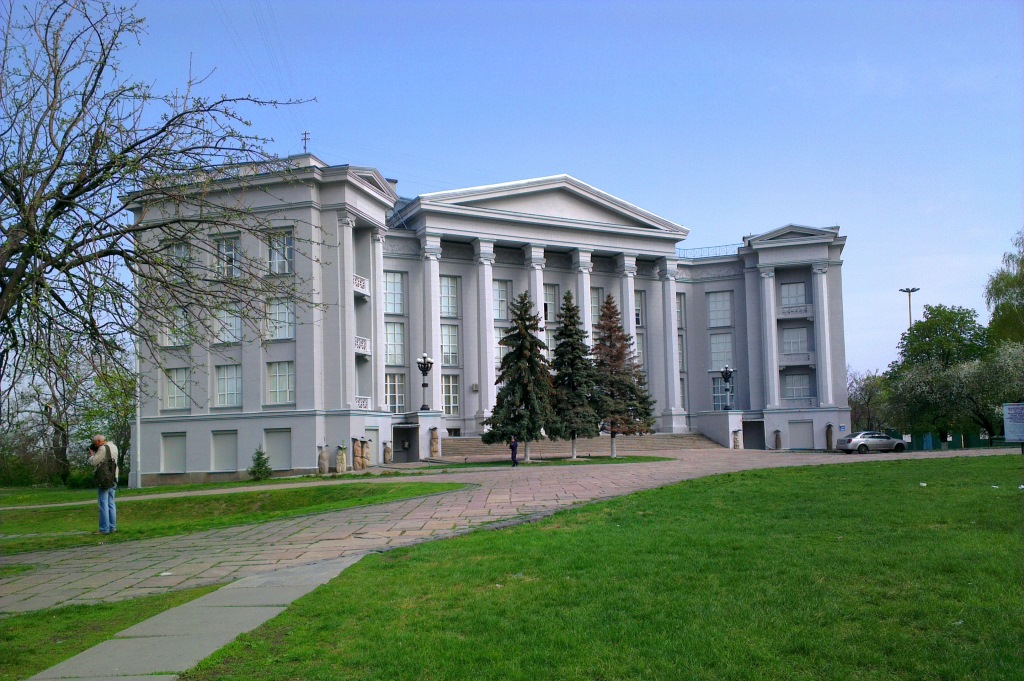 The church is located at the beginning of St. Andrew’s Descent and is the only surviving work of the architect Rastrelli in Ukraine. It may take hours to tell about the Andriyivsky Descent; it is often compared to the Moscow Arbat or the Paris Montmartre. There are numerous museums, theaters, art galleries, artists’ workshops and souvenir shops on the street. Words are but wind, but seeing is believing, isn’t it? 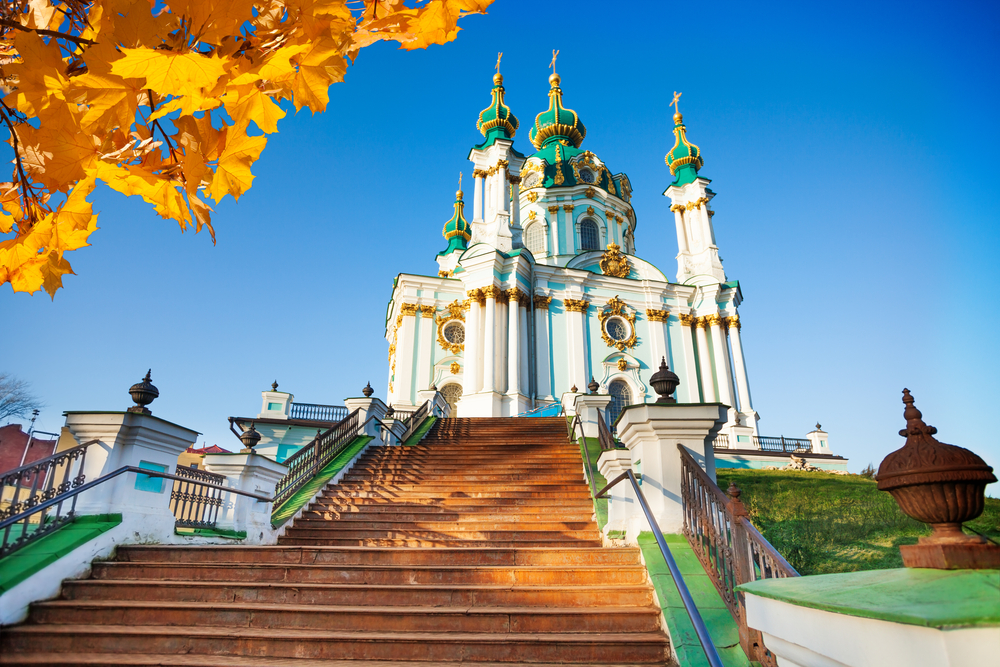 11. Church of the Assumption of the Virgin Pirogoschi

The church was built by order of the Kiev Prince Mstislav the Great at the beginning of the XII century. In 1935 it was destroyed and restored only in 1997-1998. In addition to the church, Gostiny Dvor and Samson Fountain are also noteworthy on Kontraktova Square. And the Kontraktova Square itself is the main square of the historical district of Kiev – Podol. 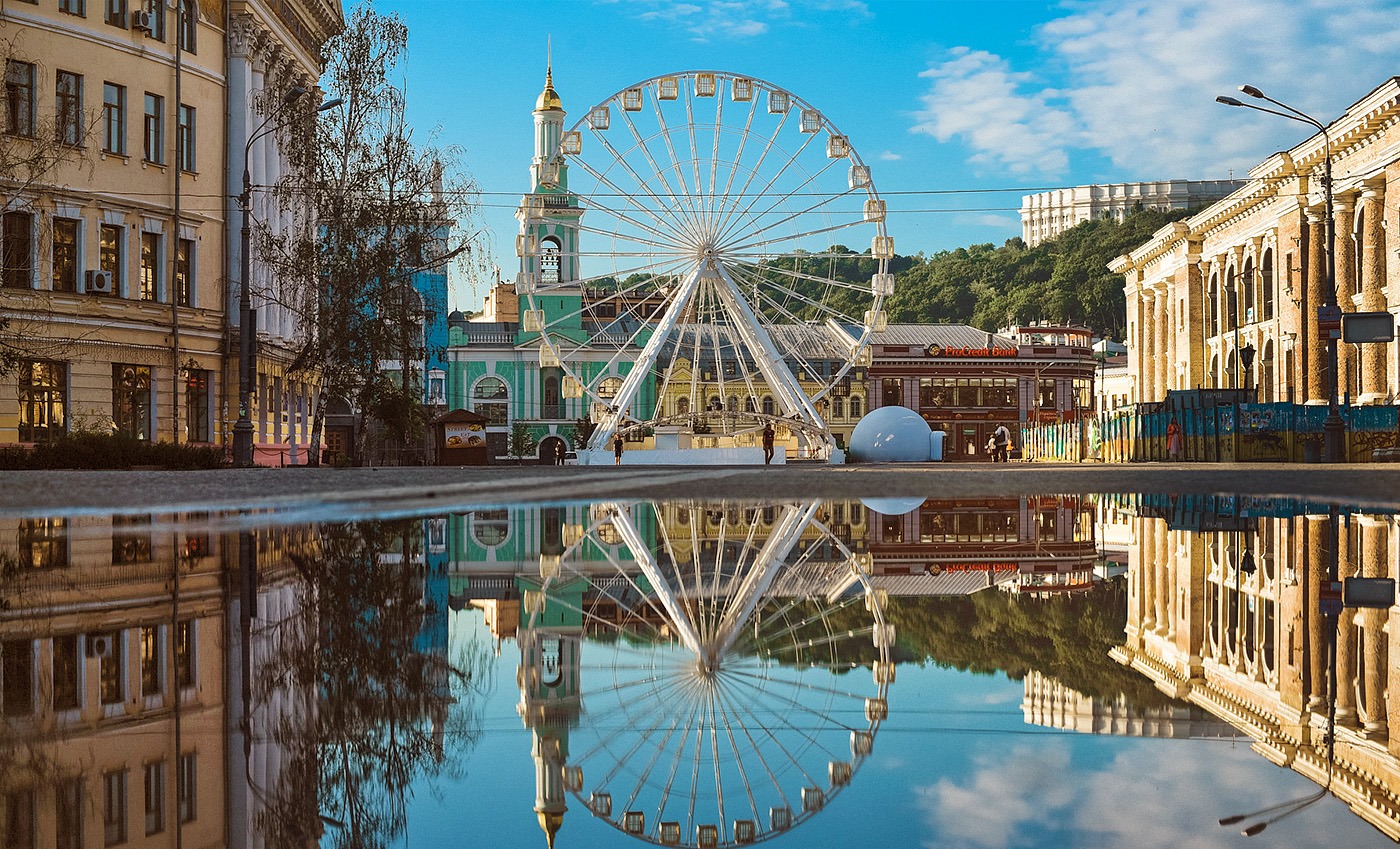 The name of the square went from the famous Contracts – the Winter Agricultural Fair, which was held at this place from the end of the XVIII to the beginning of the XX century. 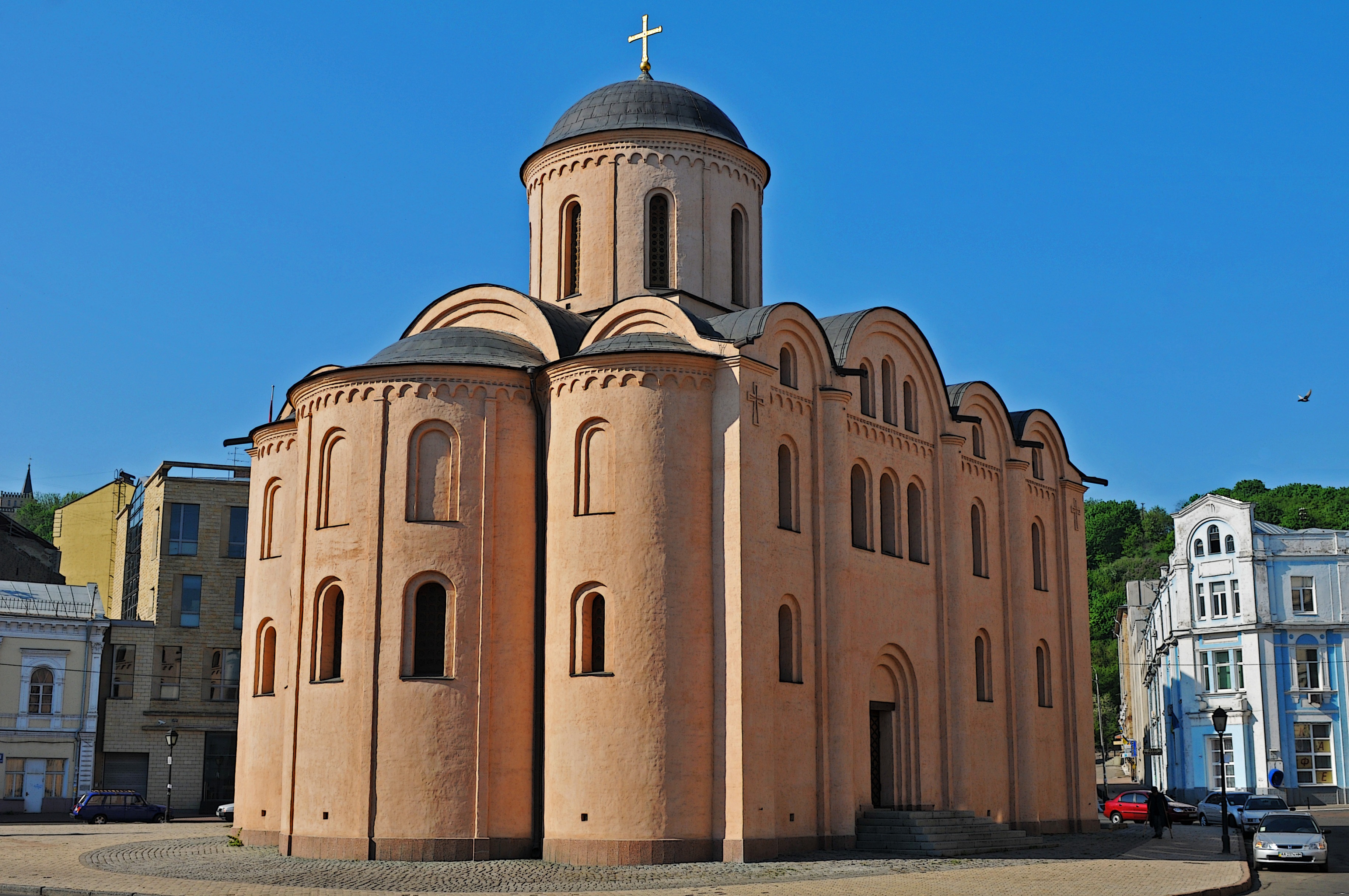 12. Church of the Nativity

The church is located on Pochtova Square, the locals also call it the Shevchenko Church, since it was here that the Kyiv residents said farewell to the ashes of the great Ukrainian poet. 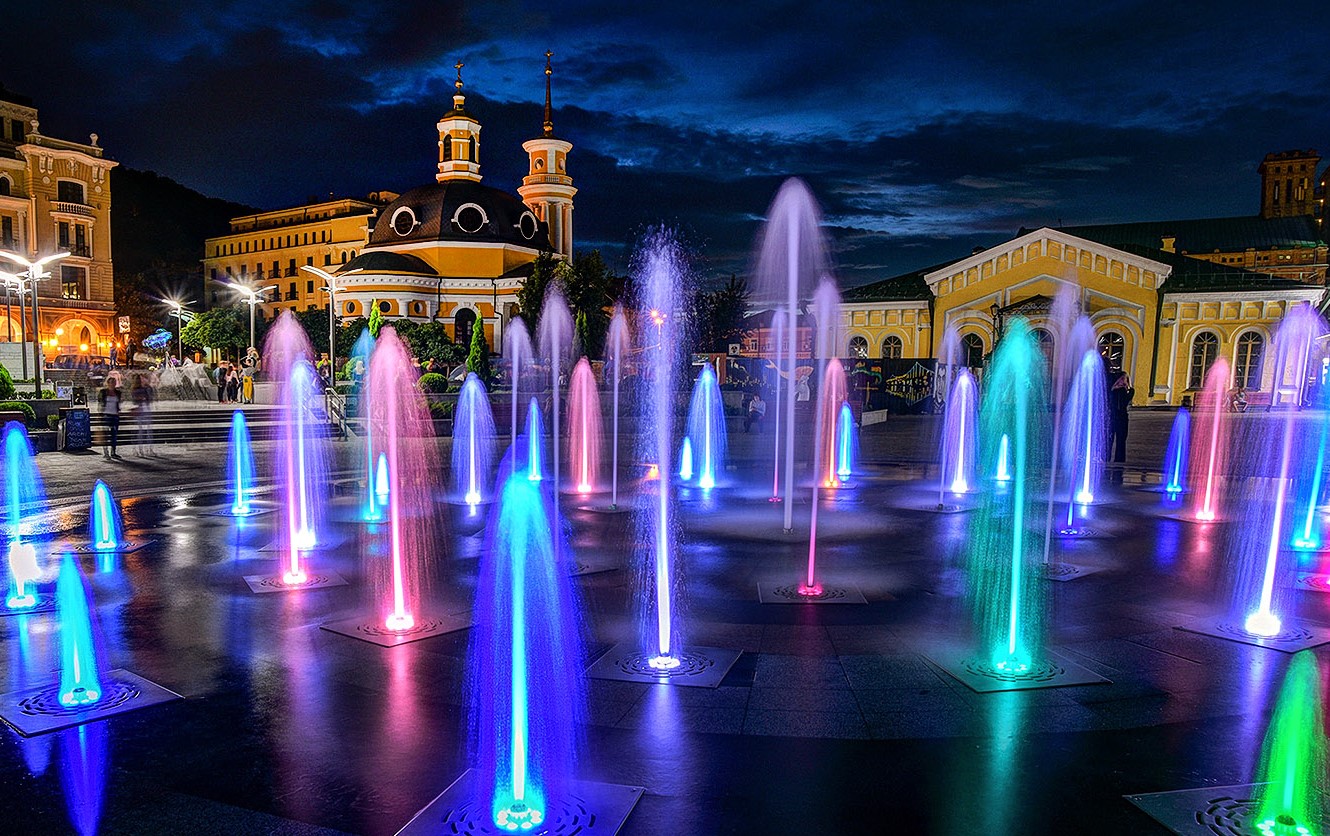 The main square of Kiev. After reconstruction in 2001, monuments, sculptures and fountains appeared here. In the center, on a 50-meter column of marble, stands a sculpture of a Ukrainian girl with a branch of viburnum in her hands. Near one of the six fountains you can see a monument to the founders of Kiev – Kyi, Schek, Khoryv and their sister Lybid. 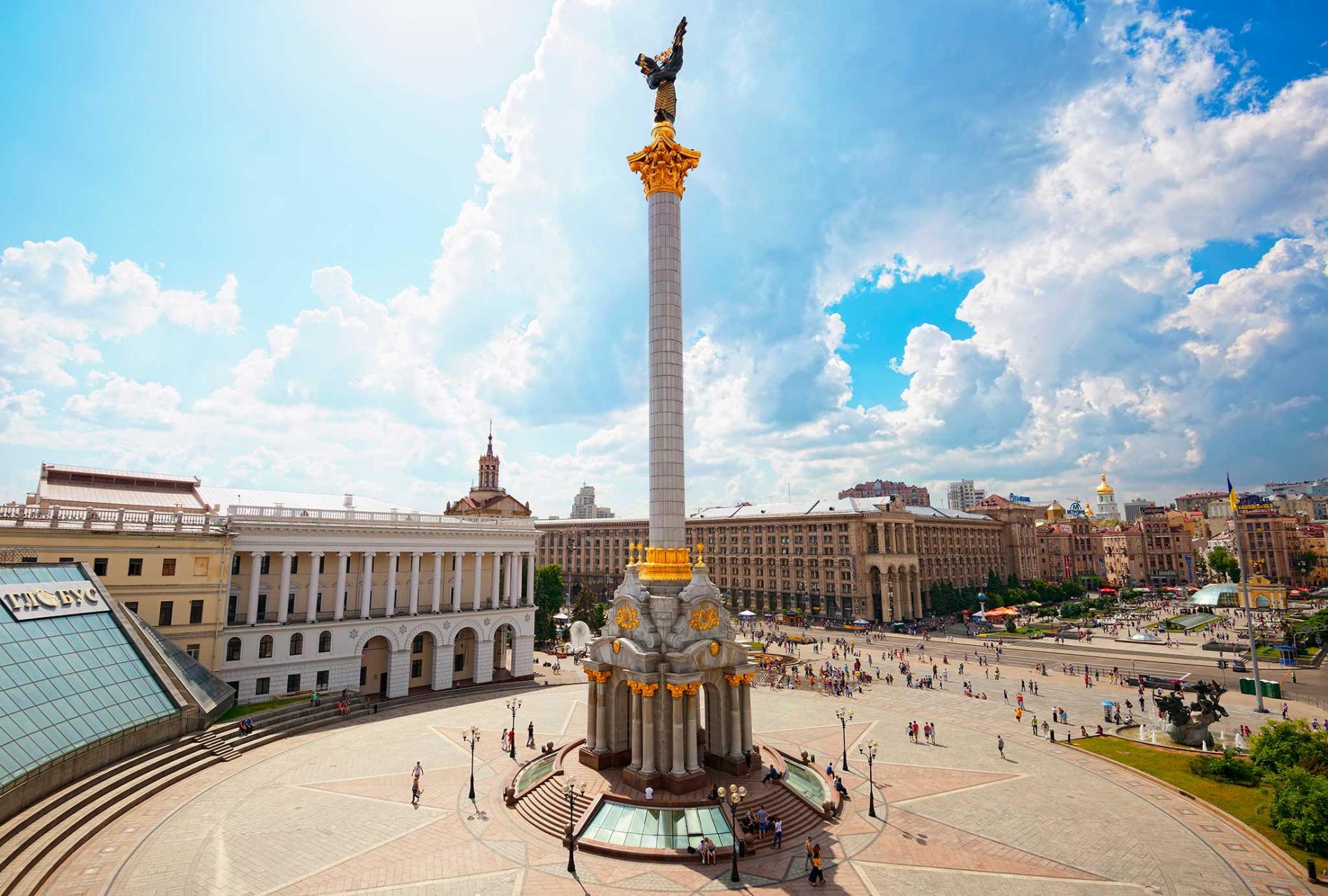 14. Institute of Noble Maidens and the National Bank of Ukraine

Both buildings are architectural monuments; they are located on Institutska Street, which got its name in honor of an educational institution for girls from noble and merchant families. 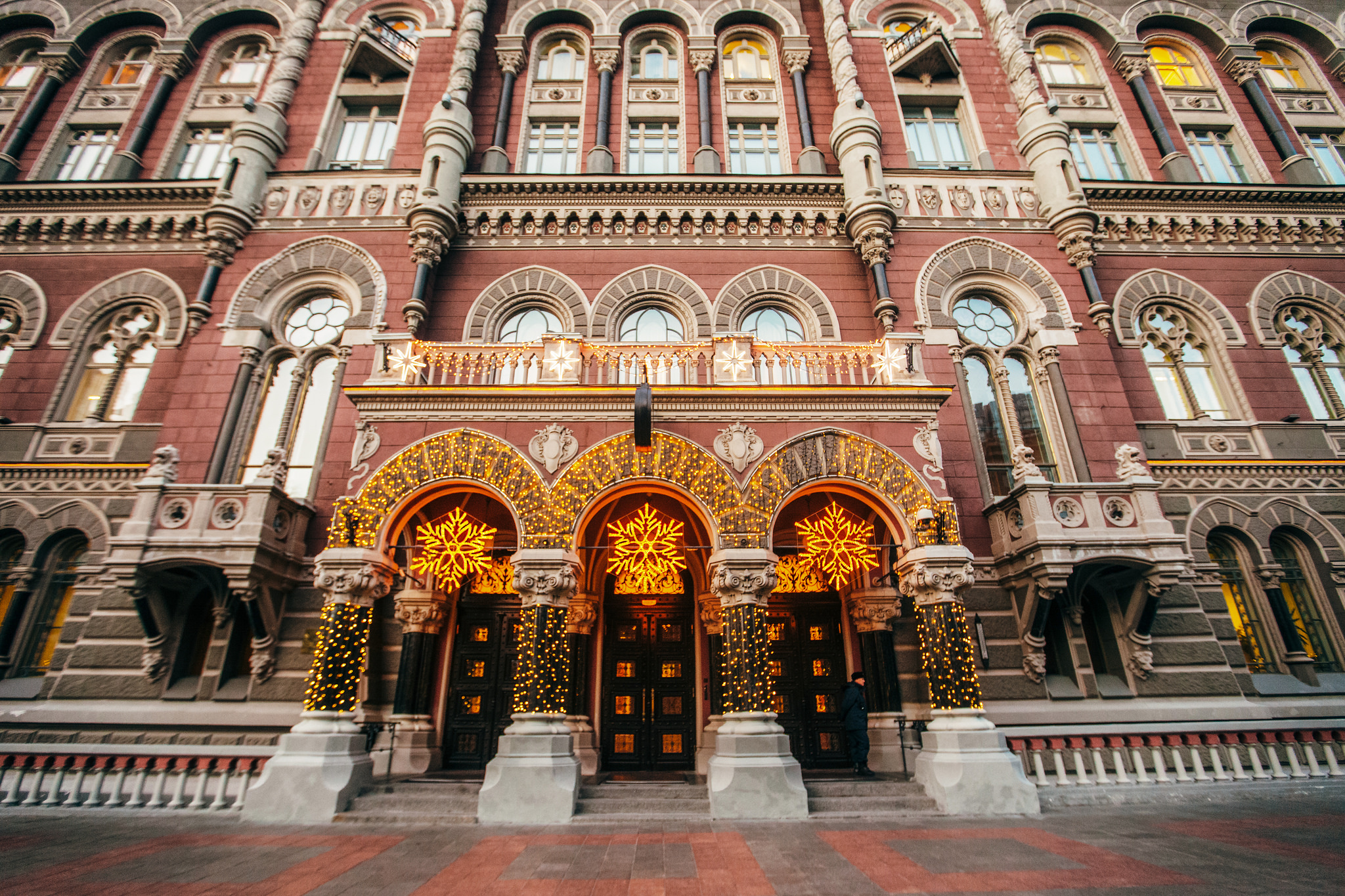 The house was built in 1901-1903 by the project of its first owner – architect Gorodetsky. He entrusted decoration of the house with the figures of fantastic animals and reptiles to his friend – the Italian architect Salyu. The building is also remarkable by the fact that from Bankova Street it has three floors, and from the side of I.Franko Square it has six floors. 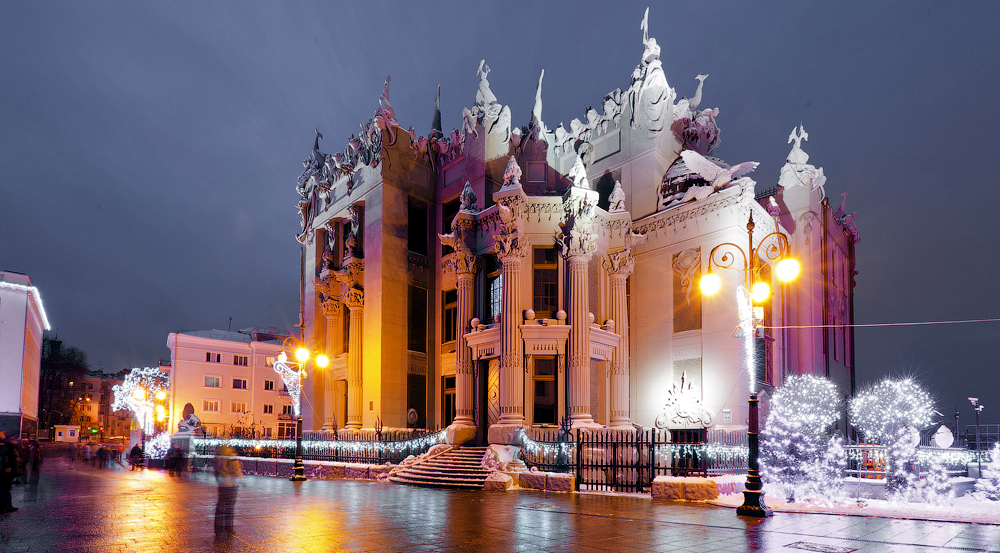 The building has a decoration in the shape of a woman’s face framed by a wreath of maple leaves. In rainy weather, drops flow down the face of the woman and it seems that she is crying. However, it is only folk rumor; in fact no widow ever lived in the house. 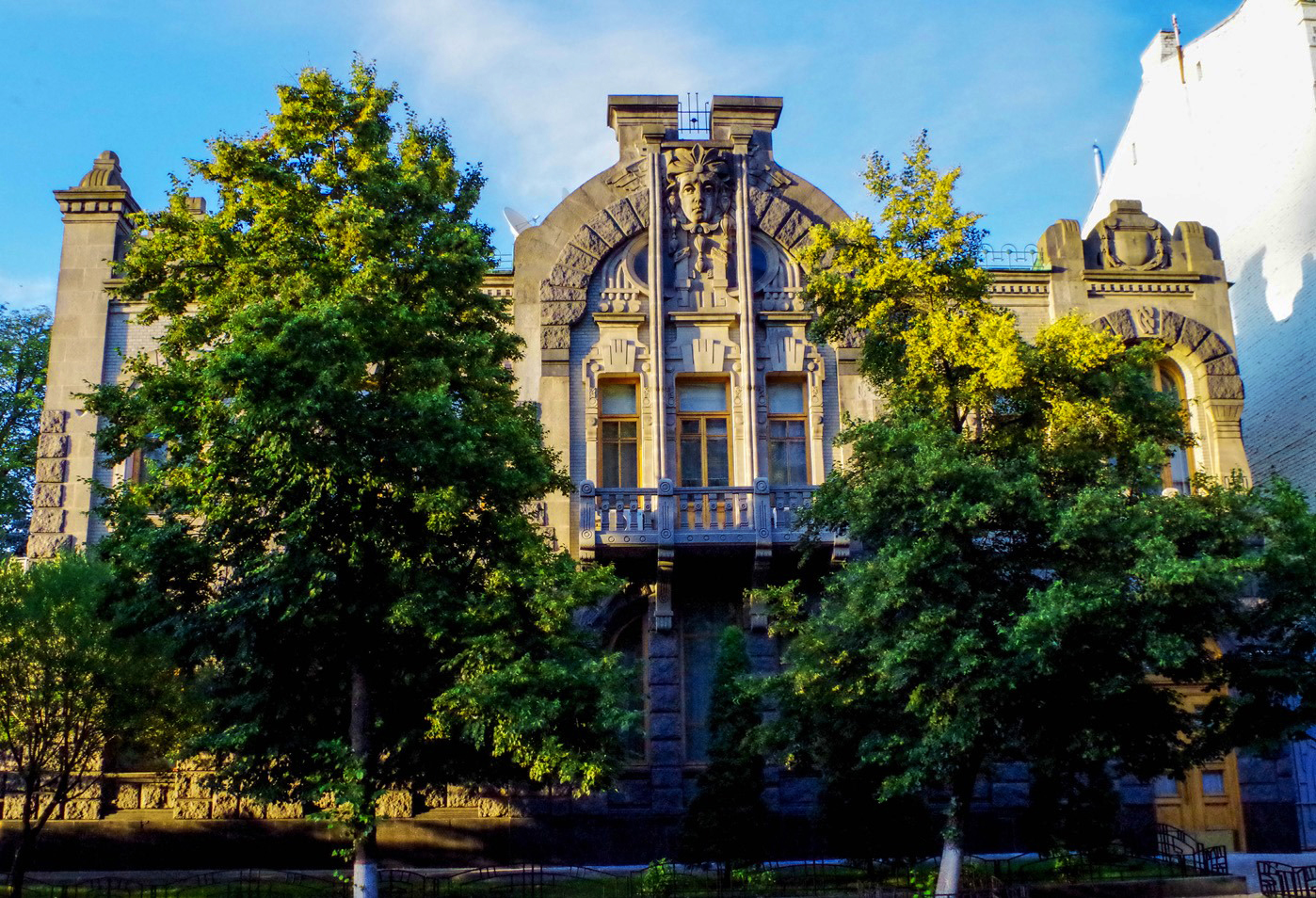 The central street of the city is a must-see place in Kiev. The street was created at the beginning of the 19th century and is currently a single architectural ensemble. On weekends and holidays, the street becomes pedestrian. 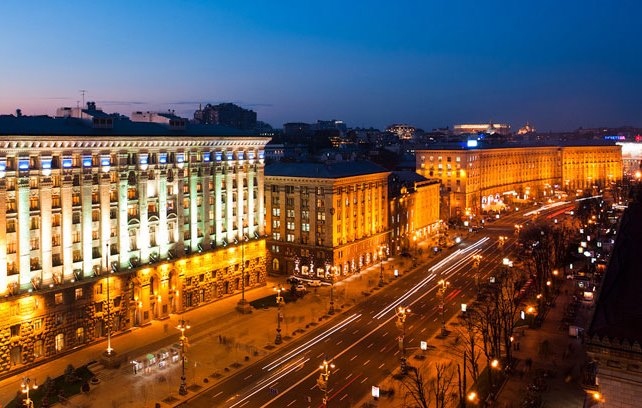 Today, our excursion is limited to a walk from the memorial of Eternal Glory to the Kiev-Pechsky Monastery. The limitation of only two places of interest is due to the need to stay longer in the monastery in order to properly experience the majestic atmosphere and have time to explore all its beauty.

18. Memorial of Eternal Glory to the Heroes of the Great Patriotic War

The memorial was built in 1975; its central object is the tomb of the Unknown Soldier with the Eternal Flame. From the observation deck you can admire the picturesque views of the Dnieper and the Kiev-Pechersk Lavra. After that, you can go down the Glory alley to the Dnieper descent, where you can see the Church of St. Nicholas, better known as Askold’s Grave. 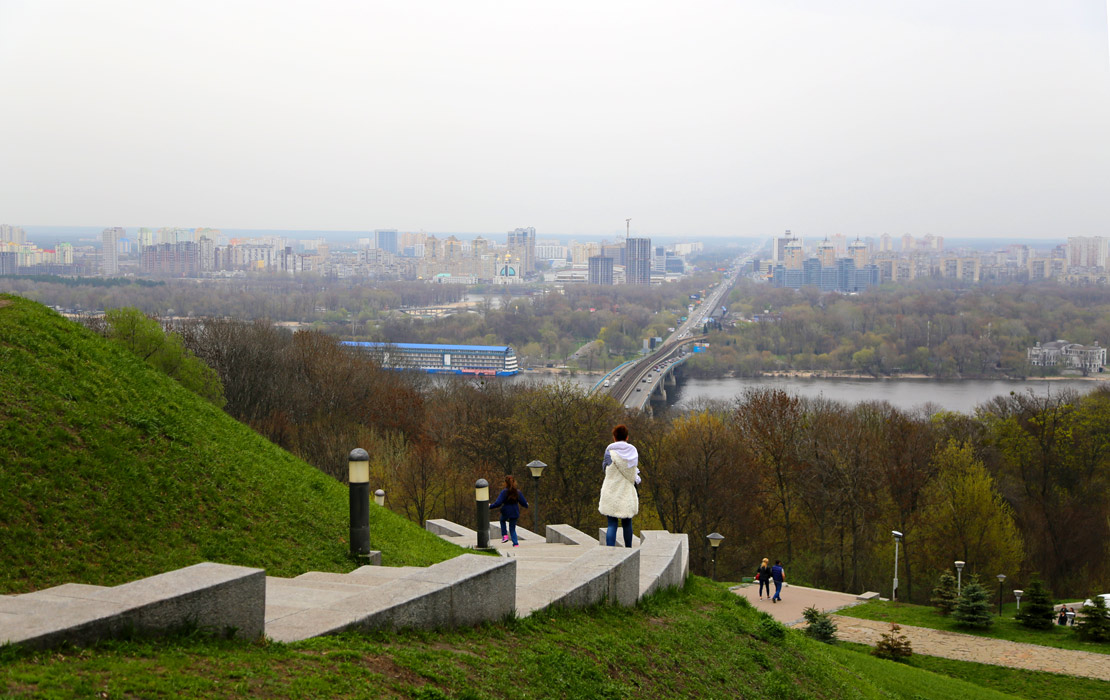 The name “Pechersk” came from the word “pechery” (Ukrainian caves), where the first monks settled; the most ancient and significant monasteries are called laurels. The main entrance to the monastery begins at the Holy Gates. According to legend, the one who passes through this gate receives absolution of half of sins. The Holy Trinity Church built in the XII century adjoins the Holy Gate. Outside the gate begins the territory of the Upper Lavra, where the Assumption Cathedral, its heart is located. Next to the Assumption Cathedral is the Great Lavra Bell Tower. 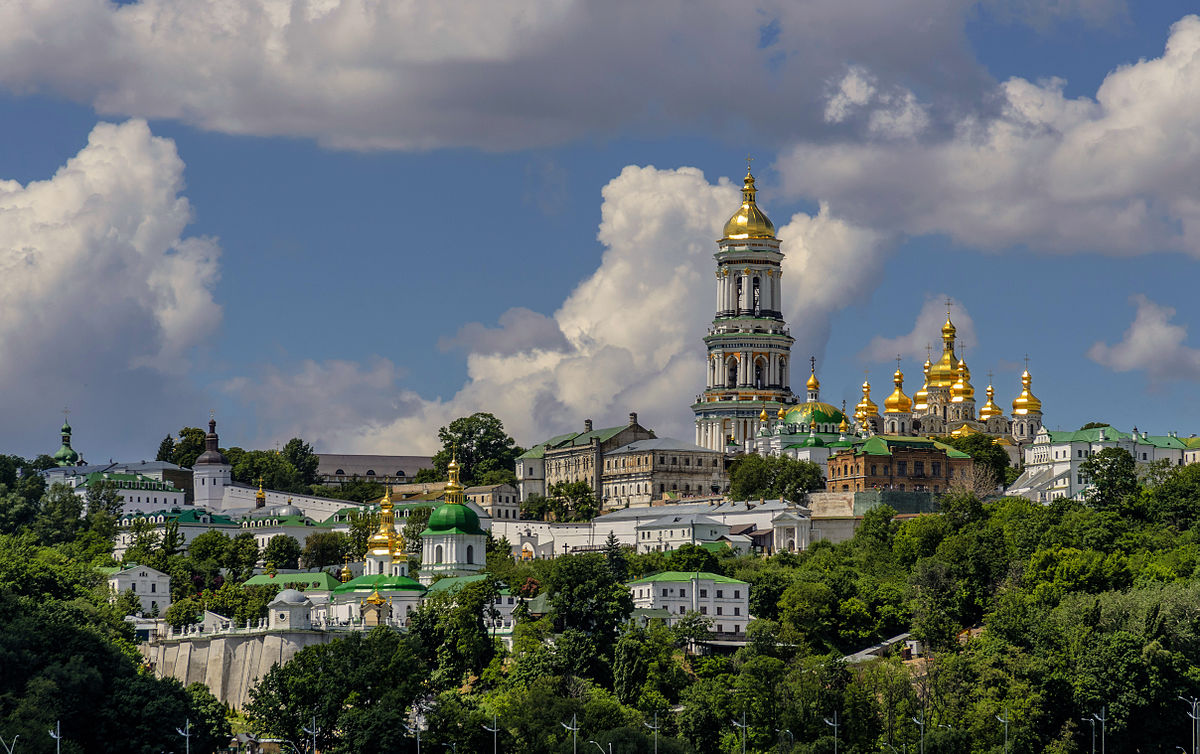 Further we will go to the Lower Lavra, Near and Far Caves. The monks prayed in the cramped earthen shelters of the first caves; many of them are buried here. Far caves are partially closed to visitors; in those that are open, you can see the relics of 49 saints.

In the monastery there are many wonderful things – temples, bell towers. Take the time to stroll through this truly holy land.

20. National Museum of the History of the Great Patriotic War

After visiting the monastery, you can go to the Pechersk Landscape Park and walk along its avenues to the memorial complex “National Museum of the History of the Great Patriotic War”. 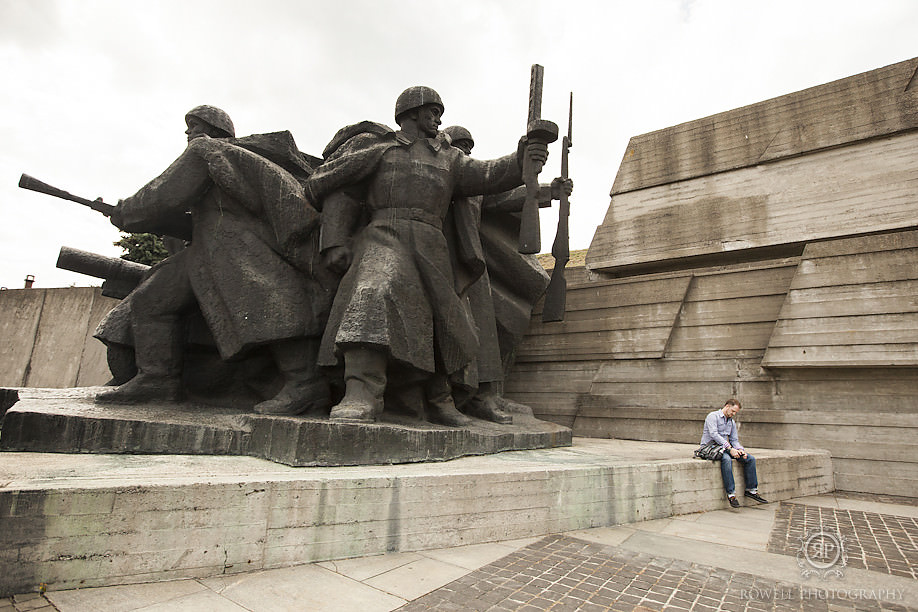 Our three-day walk through Kiev has come to an end. I really hope that the information provided helped you to make an interesting route and you not only expanded your horizons, but also got an aesthetic pleasure from the contemplation of the picturesque and majestic views of the glorious city of Kiev. We hope that an independent inspection of the main attractions will bring maximum positive emotions during your stay in Kiev!

If you want to talk to locals and get not touristic information, apply for a Private Walking Tour. 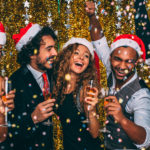 Rest and Entertainment in Kyiv during NEW YEAR and CHRISTMAS 2019 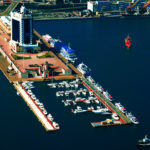