Weather in Lviv – When is the best time to visit Ukraine?

Lviv, the most authentic and colorful city of Ukraine that has a fair share of the country’s architectural heritage is located in Western part of Ukraine, only 65 km from the Polish border. The weather in Lviv is beautiful almost all year round.

When is the best time to visit Lviv?

May, June, the end of August and September are the best time to get acquainted with this ancient city.

When in Lviv, you feel as if in a different world. A lively picture of the Middle Ages appears: ancient buildings and temples of various eras the best architects of Europe worked at, cobblestone streets and themed coffee houses. After Ukraine gained independence, Lviv gained worldwide fame due to which several hundred thousand tourists flock here both in winter and in summer.

Fortunately, active development of tourism in no way spoils the pristine spirit of the city: the style of new buildings is in perfect harmony with the overall picture of Lviv.

In Lviv, there are two tourist bursts – in summer during the holidays and vacations, and in winter during Christmas holidays. Every time they come here for the unique atmosphere of a fairy tale. In addition, there is a significant influx of people during exhibitions and festivals – the city has over 100. In addition to all its direct advantages, unimaginable popularity of Lviv can be explained by affordable prices for all kinds of leisure, even in the midst of the tourist season. It is noteworthy that Lviv city administration initiated special Weekend at Half Price Program for attracting tourists; the program offers special pricing for one weekend of December when hotels, excursion bureaus and entertainment facilities provide services at a 50% discount. By the way, according to the British newspaper The Times, in the ranking of 10 best European cities for the weekend getaway for the winter holidays Lviv is ranked first by Ukrainians, and third by European respondents.

Taking into account people come here to rest all year round, it is difficult to say when it is low season in Lviv. As such, the down time comes after the New Year and Christmas – and even then, it is not for long, since Pancake Week and Easter are ahead. In addition, festivals and festive events create the effect of a magnet that attracts up to 10 – 30 thousand tourists at a time to the city.

They go to Lviv mostly because of its masterpiece architecture, and the warmer it is outside, the more you will see

In Lviv every building is a work of art many nationalities have had a hand in. The historic city center, which have been listed in the UNESCO World Heritage List, is a real open-air museum. When going to Lviv, be sure to check if there is enough space on your phone and camera – you will definitely want to make pictures of everything. The end of spring, the beginning of summer, as well as the first days of September are the best time to participate in guided tours.

Despite the fact that Lviv residents are surrounded by old-fashioned atmosphere, they do know a lot about modern fashion and try to keep up with the times. Lviv Fashion Week, which takes place in autumn and spring and attracts over 10 thousand fashion analysts, buyers, journalists and businessmen to the fashion show is a great proof of it. Time for holidays and festivals

Perhaps the most authentic Ukrainian holidays are in Lviv

Lviv residents are good-natured and hospitable people; the city can easily compete with any European capital in the number of holidays celebrated here. In the second half of September, Lviv hosts Forum of Publishers, which includes a literary festival and a book fair. In mid-autumn, all fans of this aromatic drink are invited to Coffee Festival in Lviv. It is followed by Vereteno Festival of Folk Art, the Golden Lion International Theater Festival and Holiday of Christmas Pampuschky with a parade of nativity scenes and fun contests. By the end of winter and beginning of spring the city is getting ready for sweet Chocolate Festival: professional chocolatiers will not only reveal old recipes for making chocolate, but will also treat everyone to their pastry masterpieces. The Easter Week hosts Velyka Haivka Ethnographic Festival, and the latter is preceded by a series of master classes on the craftsmanship of making Easter eggs. In May you can visit Lviv – The Capital of Crafts Festival with fairs, exhibitions and folk fun. Also on the first Saturday of May, City Day with colorful carnival parade is celebrated. In summer, the city lives in a jazz rhythm – this is the time for the Alfa Jazz Fest Festival. This is also the time for LvivKlezFest Festival of Jewish music. The climate in Lviv is temperate continental with warm mild summers and cold wet winters. August is the hottest month of the year, and January is the coldest.

The middle of spring in Lviv pleases with wonderful weather

In spring, the mood of the city changes. It gets much warmer, and the locals put on lighter clothes. The smell of fresh herbs soars in the air, and the breathtaking aroma of strong coffee comes from the coffee houses. Daylight hours are increasing and despite the rainfall, rapid warming begins in mid-spring. Lviv takes the lead in festivals and celebrations; life here is in full swing. On the last day of spring, truly spring weather sets in, sometimes it even feels like real summer. Weather in lviv in Spring

In summer, it is not as hot as in other cities of Ukraine

Summer in Lviv is amazing time. It is not hot here, which is important, it is simply warm. You can walk for a long time in narrow ornate streets, slowly explore the sights of the city or hunt for souvenirs. This is the time for music festivals, so in summer it is no less fun than in winter. In the midst of the season, the temperature rises slightly and sometimes despite all forecasts reaches 27°C-29°C. However, if this happens, then light rains fight the stuffiness. In the evening, it becomes noticeably colder, and by night, the air temperature drops by 10°C-15°C. 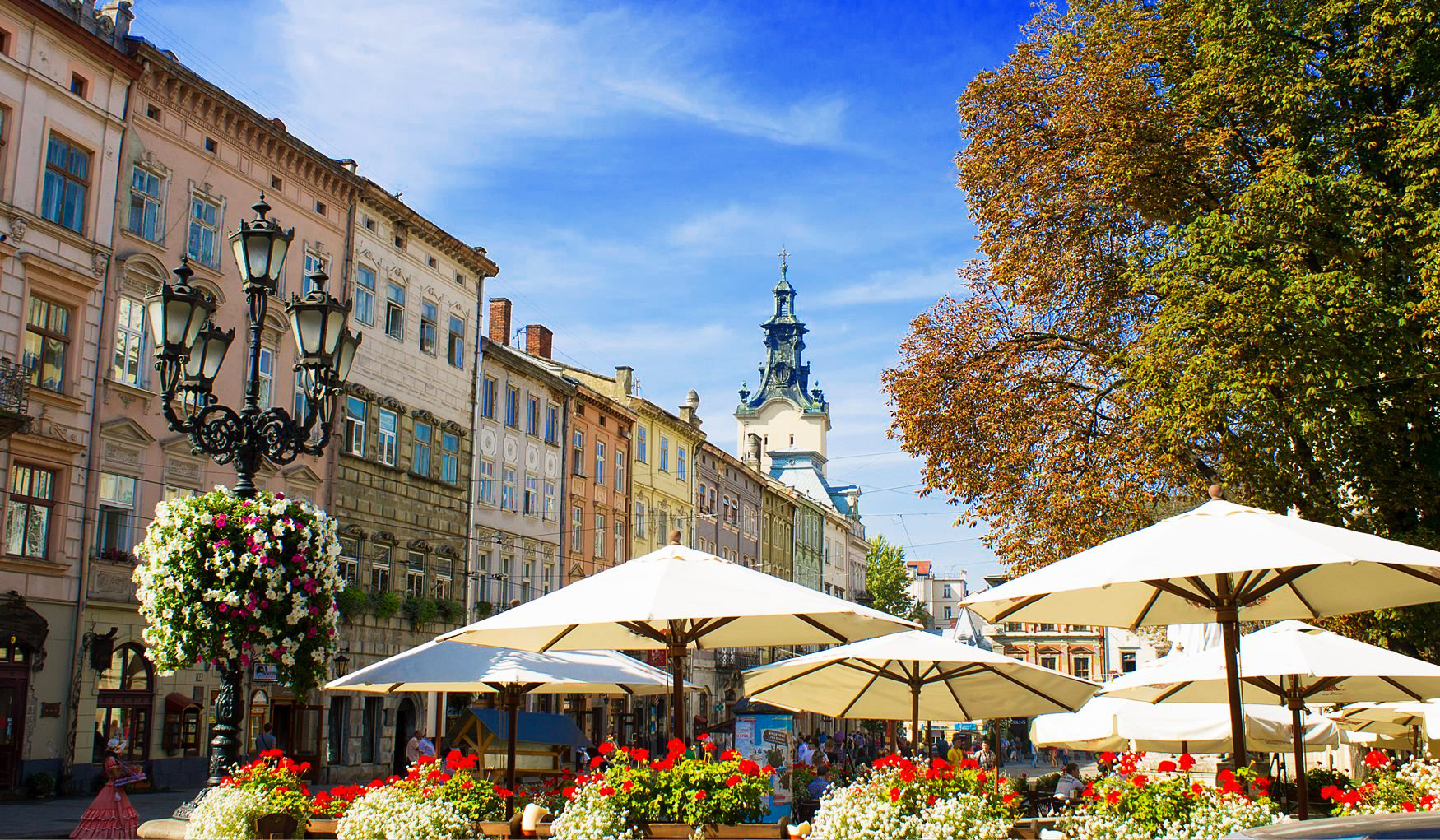 Weather in Lviv in summer

Despite the fact that autumn in Lviv is pretty cold, it is the time when festivals are held

In September, the temperature begins to gradually fall down, and closer to November it becomes really cold. This is especially true for nights when one can sometimes see a thin crust of ice on the roads. Although autumn in Lviv is a rainy season, the sun still shines bring. When walking Lviv streets, enjoy rustling golden leaves and the smell of autumn flowers. This time is a real festival fever when the city is always crowded. 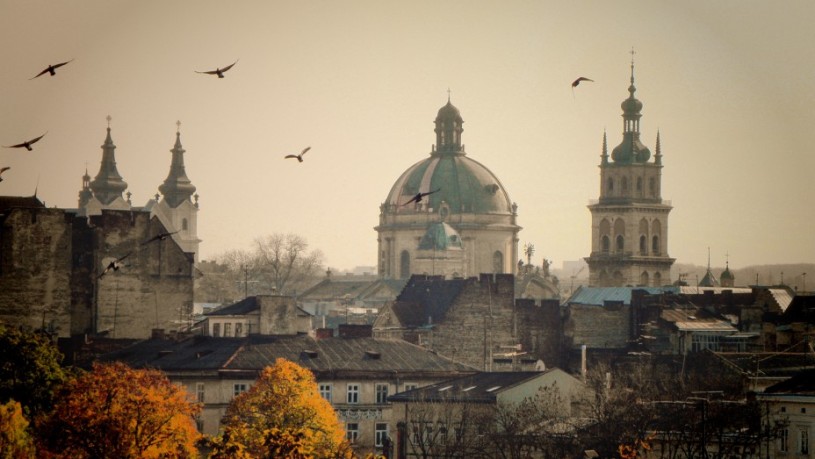 Weather in lviv in Autumn

Winter Lviv is simply fabulous, come and see it!

Winter in Lviv is a Christmas tale that has become a reality. Winter Lviv greets everyone with the snow-white decoration of old streets and the heady atmosphere of general fun and celebration. Although it’s cold outside and nights are truly frosty, winter is one of favorite times of the year both of locals and tourists. They install Christmas tree on Saint Nicholas Day, December 6, and straight after a series of holidays, gastronomic festivals and parades begins. 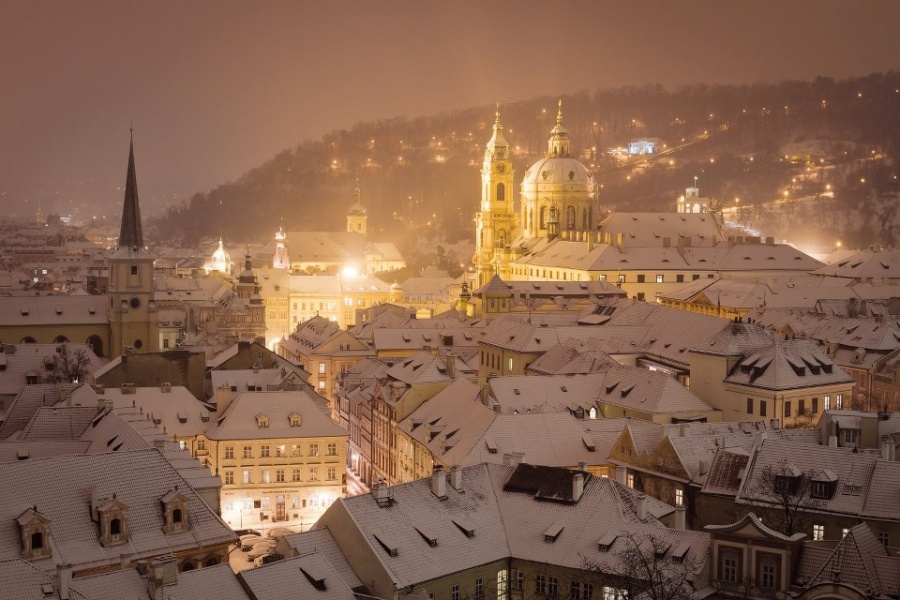 Weather in Lviv in winter

Lviv is a unique city that is good at any time of the year. It is never hot in summer; however, it is always crowded. If you crave a more relaxed rest, come here in May, in early June and September.

Lviv Old Town Tour is a private walking tour with Lviv local who will take you along the narrow brick streets of the Old City of Lviv and wıll share exciting stories of each amazing attraction. This tour is ideal for those who are for the first time in Lviv and want to see the main attractions and understand the history from A to Z. Lviv Nightlife Tour is a 3-hour walk with a local from one Lviv bar to another. The tour is private; it will be organized only for you and your friends. Lviv has the best bars in Ukraine, and we are going to show you the best places. During this short bar crawl our local guide will become your friend, will share stories about the city and tell about the life of ordinary Lviv residents. Our guides are regular visitors to local bars and know where and when to go to get the best of the night. Lviv Underground Tour is a 2-hour walk with a local through the dungeons of Lviv. No, you won’t have to crawl.

Let’s discover the secrets of Lviv dungeons together! Legends say that earlier people could travel under the old city using the underground tunnels.

On our Lviv Underground Tour, you will see the most intriguing places in Lviv. Guests can see interesting catacombs under the churches, the Pharmacy Museum and the Opera House. Coffee and chocolate tour is a gourmet treat!

Lviv is already the most famous coffee city in Ukraine, but there is a huge variety of how coffee can look and how it can taste. Coffee Lviv Tour is an overview of the best coffee houses in the city with incredible stories of coffee stories and coffee tasting. During this tour, you will drink more coffee than you ever had in two hours so make sure to skip your usual morning coffee on the day of the tour. Lviv Lychakiv Cemetery Tour is a 2-hour walk with a Private Lviv Guide in a very unusual but interesting place.

Someone calls it an open-air museum, others – a necropolis. The cemetery was established back in 1786 by order of the authorities of the Austro-Hungarian Empire. This is one of the oldest cemeteries in Europe. Over 400 thousand people are buried here! Moreover, every monument, chapel or tombstone is a work of art.

Photos of people in Lviv in summer

The most wonderful, friendly people live in Lviv. If you are a tourist in Lviv, do not be afraid to ask how to get to the main attractions. But try to ask the younger generation who speak English. 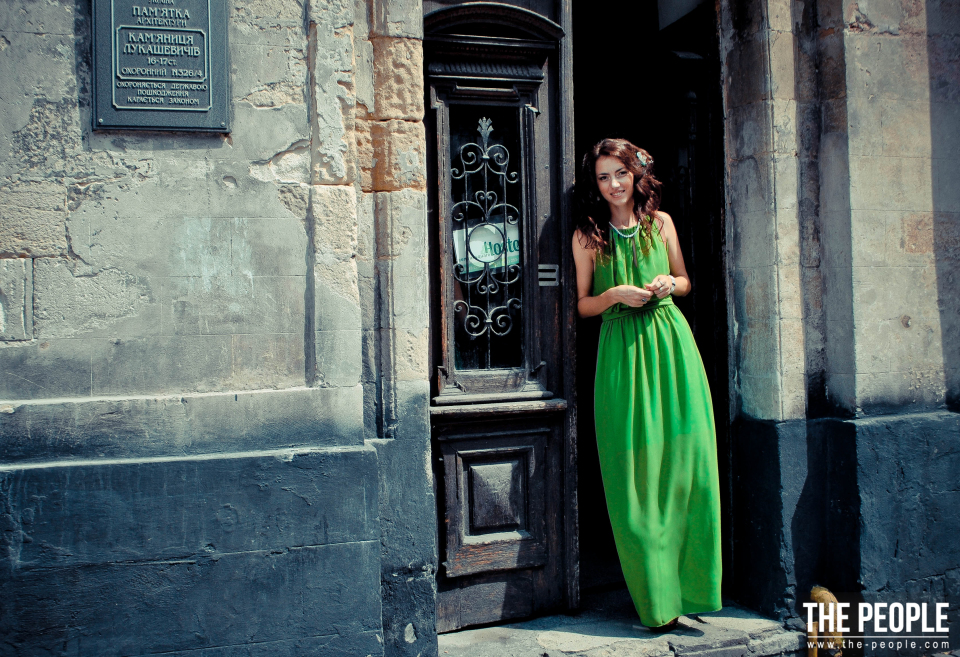 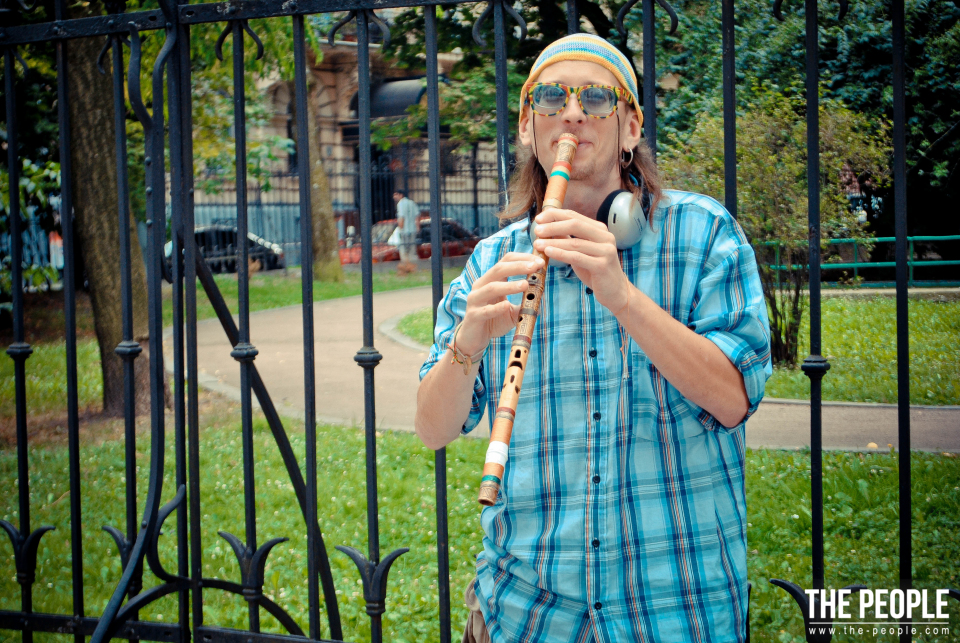 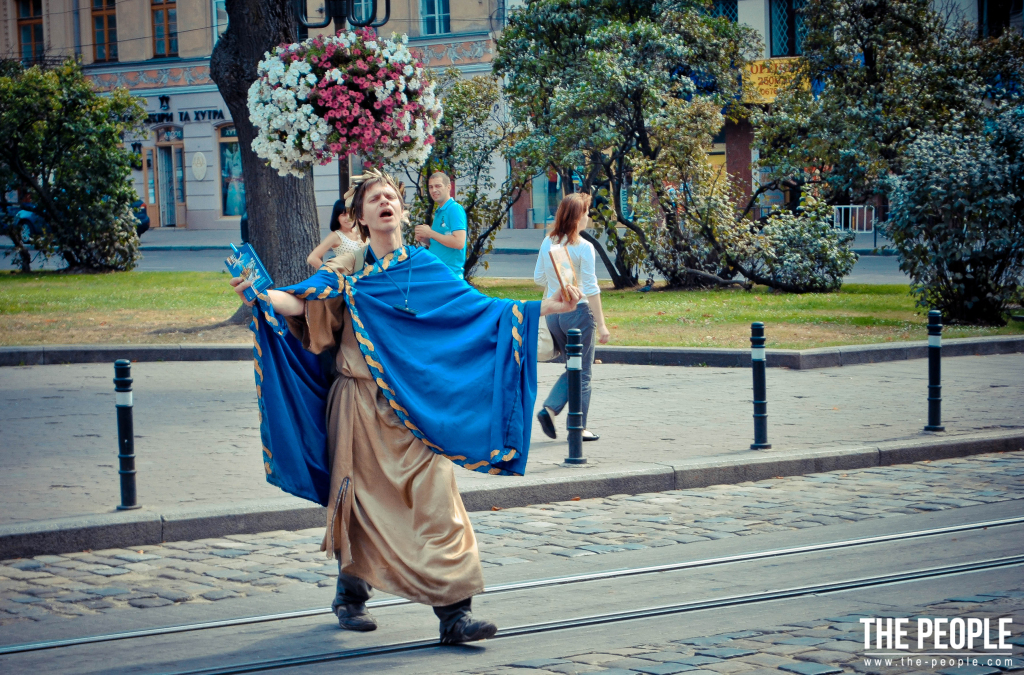 Best Lviv Hotels. Where to stay in Lviv – Perfect Area Time in Lviv. What time is it in Lviv now?