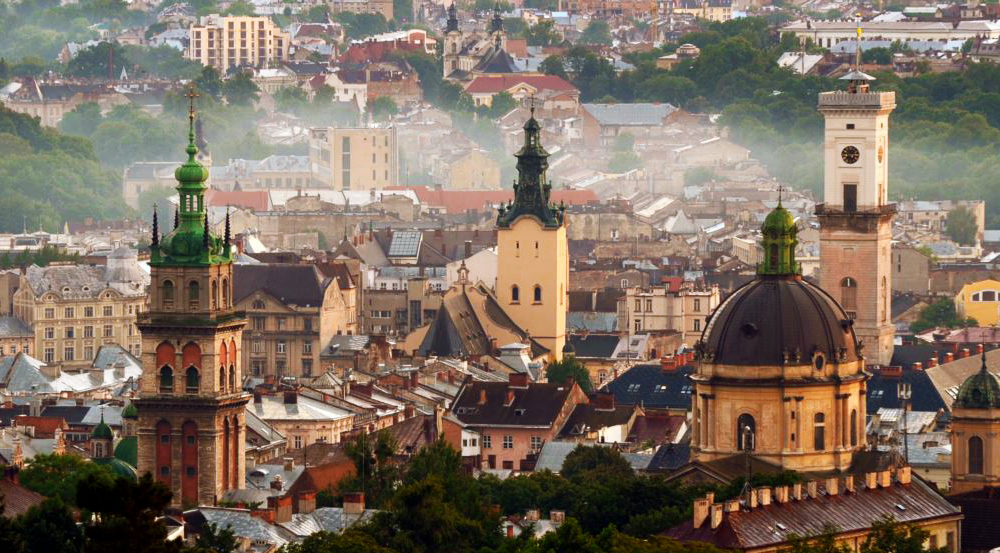 Lviv is a magical city, a country of frozen myths and legends, the land of artisans and kings, the land of forged gates and carved lions, the city of ancient history. That’s why you should definitely Travel to Lviv at least once in a lifetime.

The history of ancient Lviv is rich and interesting; it is described in detail in countless chronicles, memoirs of travelers and scientific works… The first description of the city dates back to 1258 – the date of the founding of the city by Daniel Galitsky, Galician-Volyn king (prince), who named the city to honor his heir Lev.

Supposedly 100 years after Lviv became a part of the Polish kingdom, the city began its rapid development. During the XV-XVI centuries multinational communities are being formed in Lviv – activity of these Ukrainian, Armenian, Polish, German, Jewish communities was predetermining for Lviv for many centuries.

New sacred buildings, fortifications and constructions appear in the city.

When the city was a part of Austro-Hungarian Empire (1772-1918), it became the center of the Kingdom of Lodomeria and Galicia.

On Nov. 1, 1918, having played the cards right (it was the time of collapse of the Habsburg Kingdom), Ukrainians announced the creation of the Western Ukrainian People’s Republic. However, it did not last long… Soon, due to the Polish-Ukrainian confrontation, Lviv once again appears to be part of the Polish Voivodeship.

In 1944, with the advent of Soviet rule, most of the Polish population was deported from Lviv, and many thousands of Ukrainians were deported to Siberia. It resulted in lasting struggle of the Ukrainian nationalist underground in the West Ukrainian lands until the end of the 1950s.

After the end of the Second World War, the city of Lion was restored and began its rapid development as a part of the Union of Soviet Republics.

In the 60s and 70s, many scientific institutions and industrial enterprises have appeared in the city. Nevertheless, the f freedom of speech is suppressed, dissent is not allowed. In the 60s, Lviv dissidents first advocated for human rights. And in the late 80’s it was Lviv where the movement for the declaration of Ukraine’s independence was formed.

Today, Lviv is one of the largest regional centers of Ukraine (with a population of over 900 thousand); it is the most important cultural, scientific, economic and political center of the western territories of the state. Today there are over 2,200 historical, cultural and architectural monuments in Lviv; the central part of the city is proclaimed architectural and historical reserve and is in UNESCO World Heritage list.

The fantastic panorama of the city, its architecture, unique European traditions, elitist art, the hot flavor of national traditions of many peoples and pure-hearted hospitality are all depicting modern Lviv. 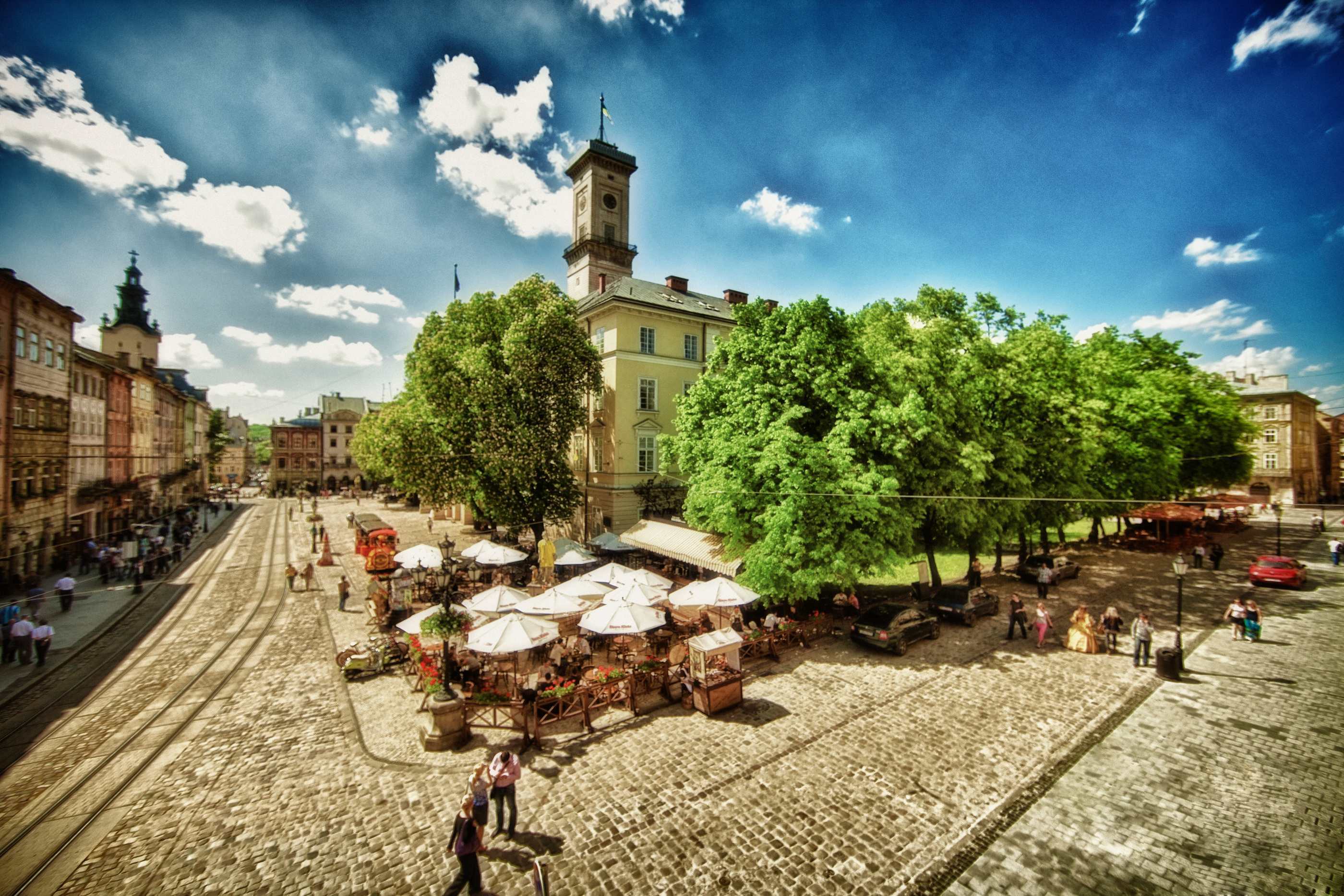 If you are going to rest in the Carpathians, or are just planning a visit and for some reason turned out to be in Lviv, do not forget to visit the sights of our fabulously beautiful city.

What to see in Lviv?

From our article, you will find out what you can see in Lviv even if you are visiting it less than for a day. Today, most tourists come to Lviv by train, so we will start our virtual journey from the railway station, which first attracts the attention of tourists. Having left the car put your luggage on the ground, and look up. You will see a beautiful modern arched ceiling, made of glass and metal. It is very well combined with the large, historic, ancient building of the railway station. Having examined and photographed against the backdrop of the epoch-making structure, we move further into the city center.

This is where the most of the sights are concentrated, which of course is very convenient for visitors, tourists and guests of the city. To get to the city center, you can take a direct tram, bus or shuttle taxi. But if you have enough time, we advise you to walk from the train station to the center of Lviv. The first interesting attraction after the train station, which you will surely see on your way – is the majestic Temple of St. Elizabeth on the corner of the Kropivnitsky Square. The temple is built in neo-Gothic style and is very similar to the French Gothic architecture. Passing further Gorodotsky Street, which leads directly to the center of Lviv, behind the circus building, on the top of the hill (Yuryevaya Gora) you will notice the large domes of one of the most beautiful cathedrals of the city of Lviv – St. George’s Cathedral, built in the style of rococo. In 1999, this architectural monument became a part of UNESCO World Heritage List. 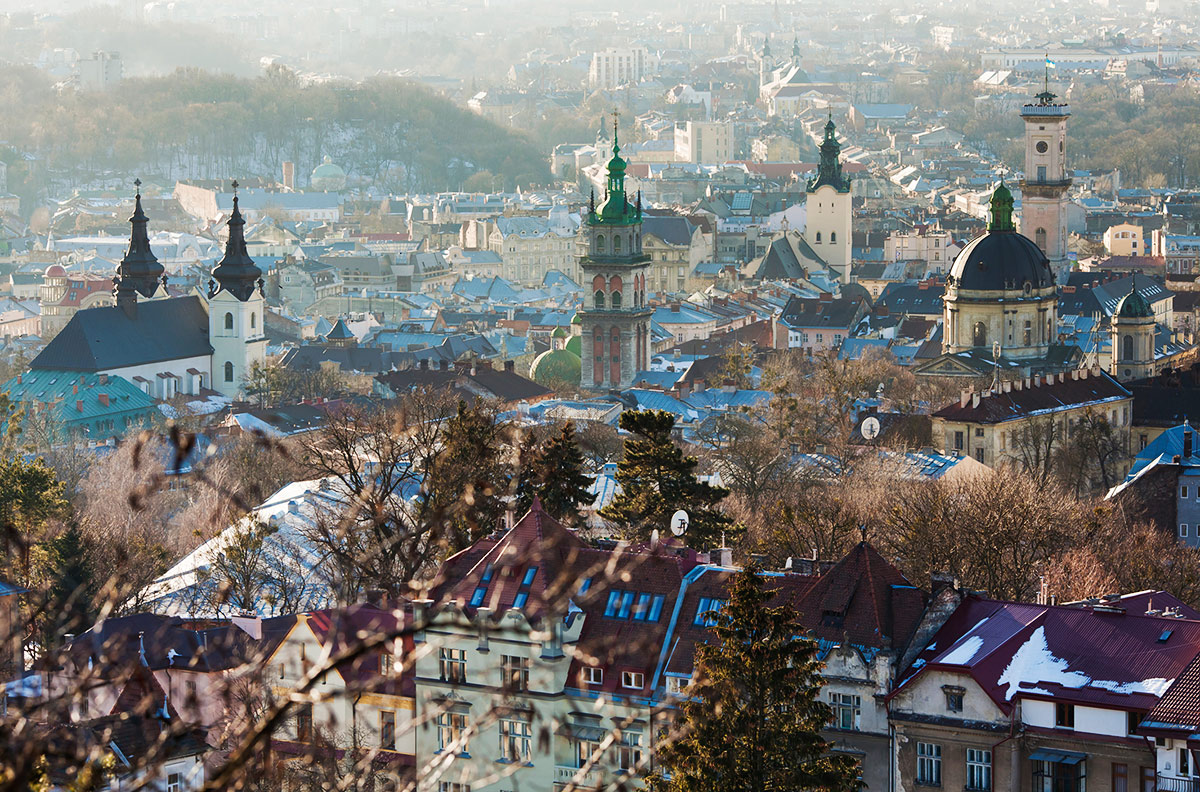 If you wish, you can visit this Cathedral- just walk up Ozarkevich Street. Almost in the center of Lviv at the beginning of Horodetskaya Street, you will see the gem of Lviv architecture – the Lviv Opera House. It is rightly believed to be one of the best theaters not only of our country, but also of Europe. Immediately before the main entrance to the opera house there is a beautiful fountain; at any time of year both guests and hosts of Lviv love to stay here to speak and relax. If you are still interested and you are full of strength, we recommend climbing on the observation platform of the Town Hall of Lviv, and enjoying beautiful panorama of the architectural diversity of the central part of the city. There are several routes to get from the Lviv Opera House to the Market Square, namely to the Lviv City Hall. 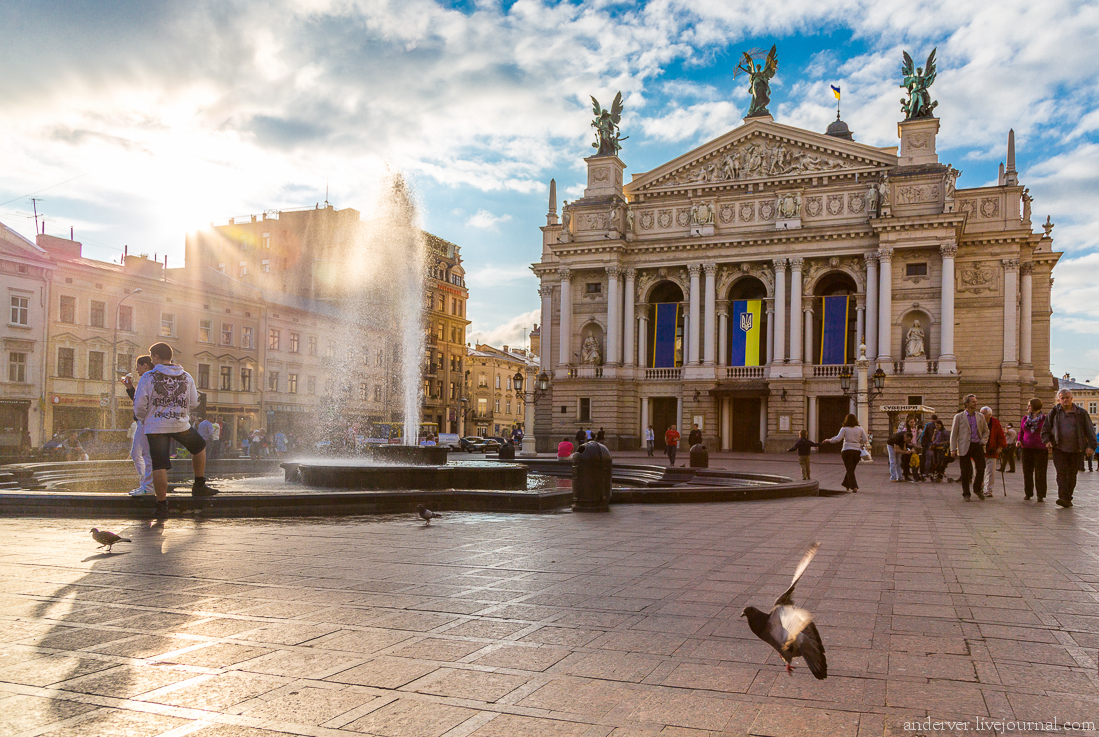 We recommend you the following: walk the Freedom Avenue to the monument of Taras Shevchenko, then to the monument to A. Mickiewicz, then turn to Teatralnaya Street, and bypassing the interesting sight of Lviv, the Latin Cathedral (you should visit it later), you will get to the Lviv Square Market. When walking the Freedom Avenue, look around and pay attention to the fabulous building behind the monument of T. Shevchenko – it is the church of the Jesuits of St. Peter and Paul, which is considered to be one of the first architectural monuments of Lviv in the baroque style. Having enjoyed the fabulous panorama from the Town Hall square and down the hill, take a walk around the Market Square, carefully look at every building – you are right in the center of the Lviv architectural and historical reserve. Probably you are tired, and most likely you are hungry by now. In the Market Square there is a perfect variety of cafes, restaurants and bars where you can have a delicious snack and smell the fabulous aroma of unique Lviv coffee. After you have had some rest, we can continue our excursion around the city. We recommend you to visit the famous Lviv High Castle. And in order not to waste time, we will enjoy a few more historical sights of Lviv on our way.

When walking the Armenian Street, make sure to have a look at the Armenian Cathedral. Later, when you get to the Museum Square, you will see the majestic Dominican Cathedral. A little further away is the architectural ensemble of the Assumption Church; it also includes the Chapel of the Three Saints and the Tower of Kornyakta. Our tour takes us further along Podvalnaya Street. This is the only place in Lviv where the defensive buildings of the city of XVI-XVII centuries are still preserved as before. We will see the Powder Gate, the Royal and City arsenals. The City Arsenal hosts the museum of weapons. Visiting the sights of Lviv, we almost approached the architectural foundation of the High Castle.

All the guests of Lviv want to see the castle. But, unfortunately, only a fragment of its wall has been preserved. There is a fabulous view of the city from the top of the mountain of the High Castle, at an altitude of 416 meters above sea level. To compare, one can see only the central part of Lviv from the Town Hall; but from the High Castle the beauty of Lviv reveals in its full. After the observation deck, make sure to take some time and walk the alleys of the Vysoky Zamok (High Cqastle) city park. 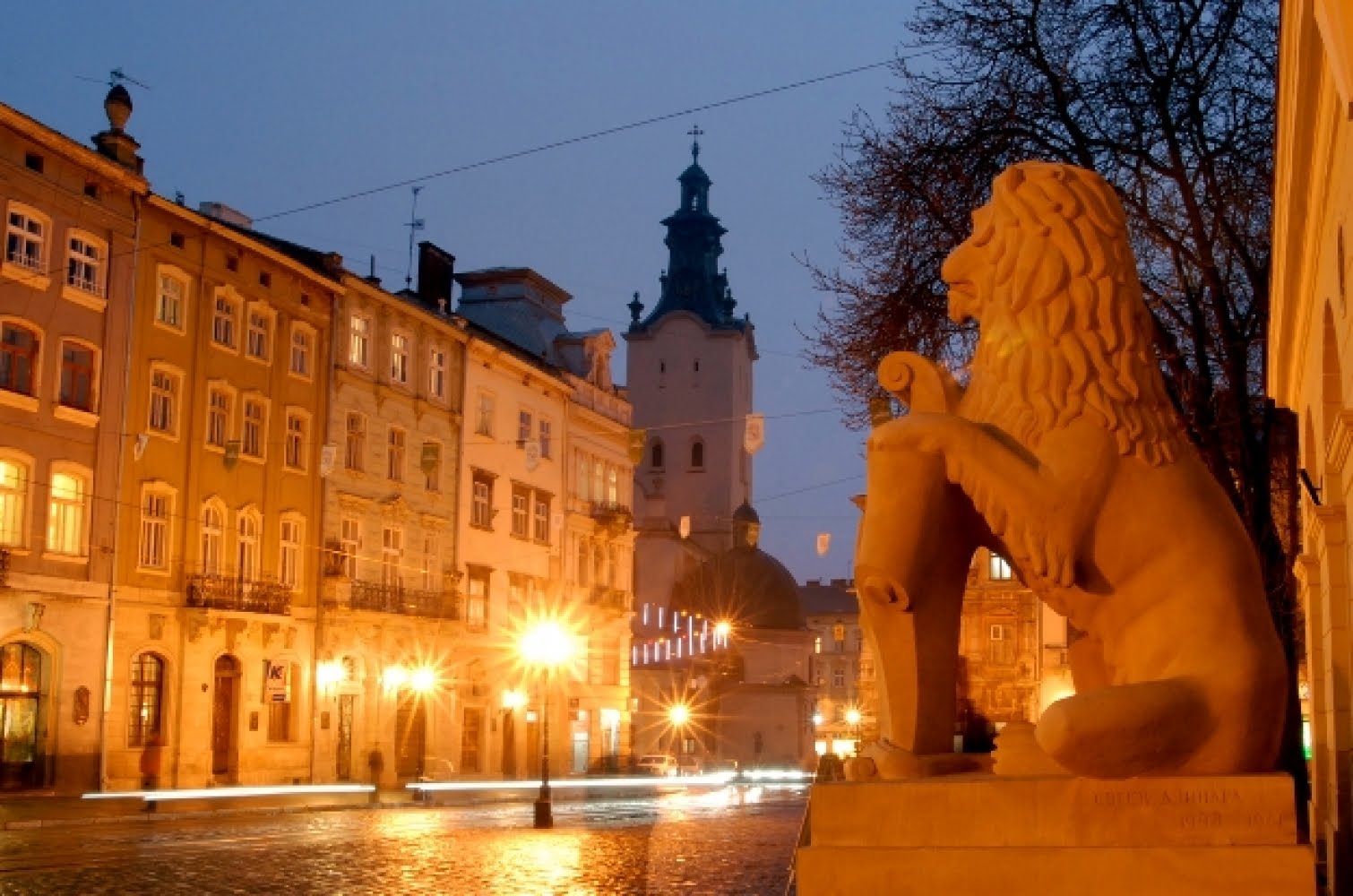 Later walk the Vynnychenko Street to return to the city center. On this street you will see the Church of Discalced Carmelites or Barefoot Carmelites. Next to it there is the majestic building of the former Bernardine Church, today it is the Church of Andrei. As a conclusion, take a walk on Shevchenko Avenue, which is very popular among residents of Lviv, tourists and guests of the city. On weekends and holidays, it is also possible to take a short excursion around the city on a sightseeing train; you can buy the ticket and take your seat on the Market Square.

Check Tour Packages to Ukraine with Guide me UA: 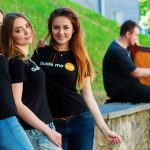 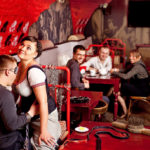 Lviv Nightlife – Where to go at night in Lviv