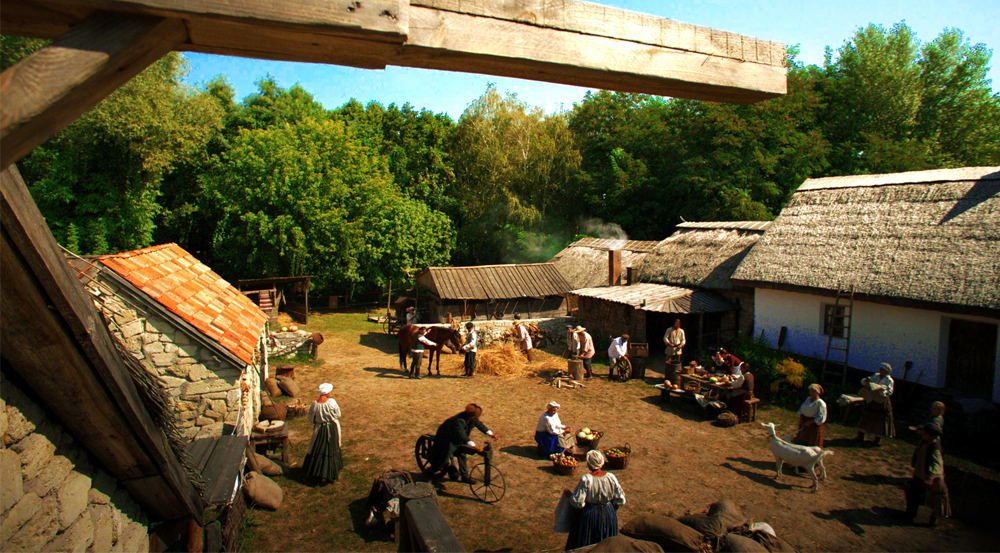 Tour to the Ukrainian Village with Local English-speaking Guide

Far from all the peoples of Europe have such a reverent attitude to the national culture, traditions and customs as Ukrainians do. And the issue is not about certain conservatism of the inhabitants of Ukraine, but also about the low welfare of people among the rural population. The open-air ethnographic museum is not a rare phenomenon; there are more than six hundreds of them all over the world. In Ukraine, such venues can be found in Chernivtsi, Uzhgorod, Lviv, and Galich. However, the most famous ethnographic museum, the Ukrainian village in the open air is located in Pirogovo, Kyiv. Other museums use its methodology and copy its basic concept in many things.

We offer going on a Tour to the Ukrainian Village with English-speaking local and will tell you about all the details of the rural life.

Tours to the Ukrainian village of Pirogovo

“Here you see the history of the Ukrainian people and its culture; you feel the spirit of the Ukrainian village. And I literally saw live illustrations to Nikolai Gogol novels there,” German Peter Schulz, a guest of our tour, says.

The main part of the Kiev open-air museum is dedicated to the Ukrainian village of the 18th and 20th centuries. 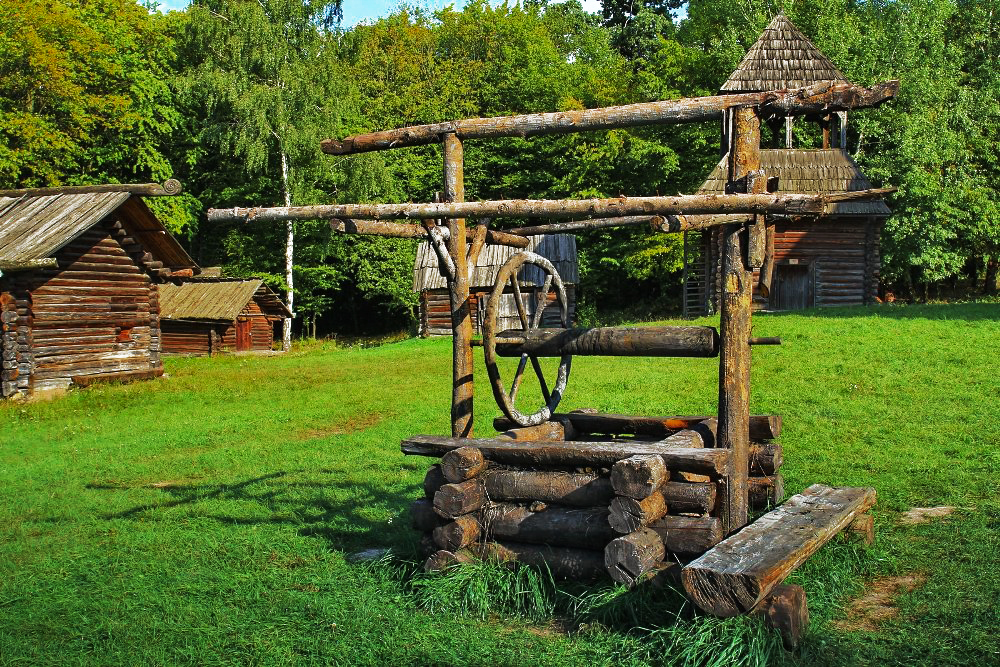 In Pirogovo, there are several estates, which include residential buildings and outbuildings. Each of the estates represents separate region of the country and is built taking into account regional planning and architecture traditions. In total, in the Pirogovo Museum, six ethnographic regions were demonstrated in all their glory: “South”, “Karpaty”, “Polesye”, “Podolie”, “Middle Dnieper Region”, “Slobozhanschyna and Poltava Region”. In addition, there are separate expositions such as “Windmills”, “Modern Village” and “Fairground”.

For one season, they celebrate about twenty holidays in Pirogovo. Some are religious, both pagan and Christian. 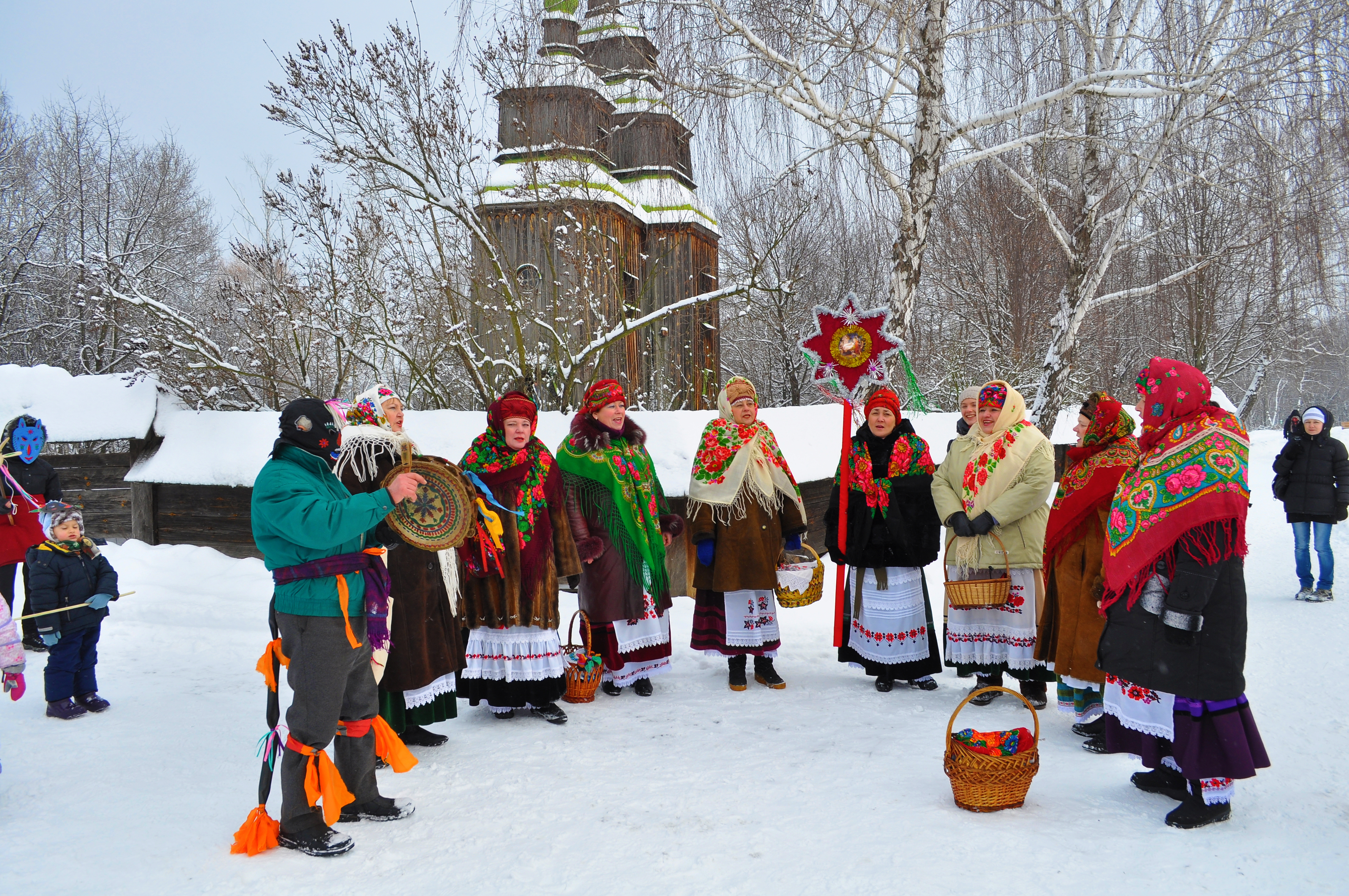 There are five Orthodox churches with services regularly held; here it is possible to hold both baptismal service and wedding ceremony. The work of reenacting ceremonies lies entirely on the museum workers. They collect materials that relate to the customs of the regions of Ukraine. After that, on the basis of the information collected, scenarios are being created, according to which interesting performances are held; both professional folklore groups, interested schoolchildren, students, and everyone who is interested in the subject of folk culture may take part.

In addition, at the request of visitors, they can be taught the basics of some national crafts. Such entertainment is especially popular: foreign tourists demonstrate much enthusiasm drawing unusual intricate patterns on pysanky, businessmen are trying to master the pottery, and their wives are happy to try a spinning wheel and needle.

To book the Tour to the Ukrainian village, go HERE 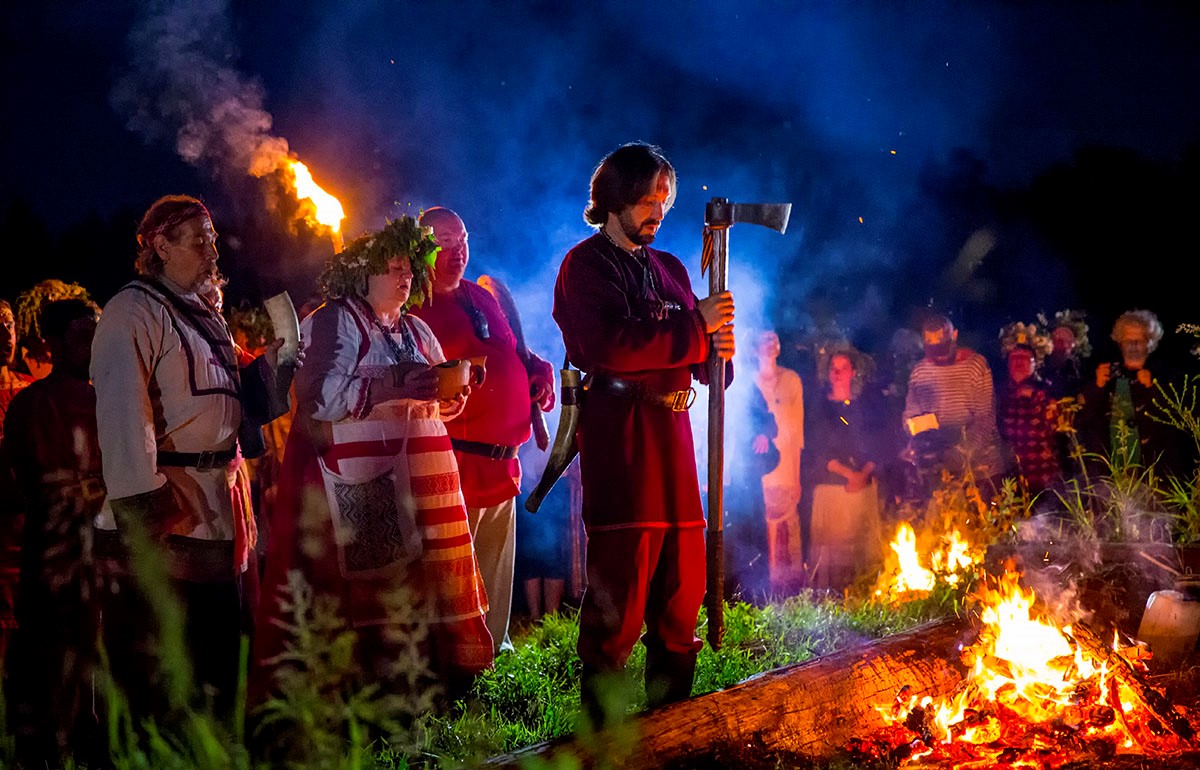 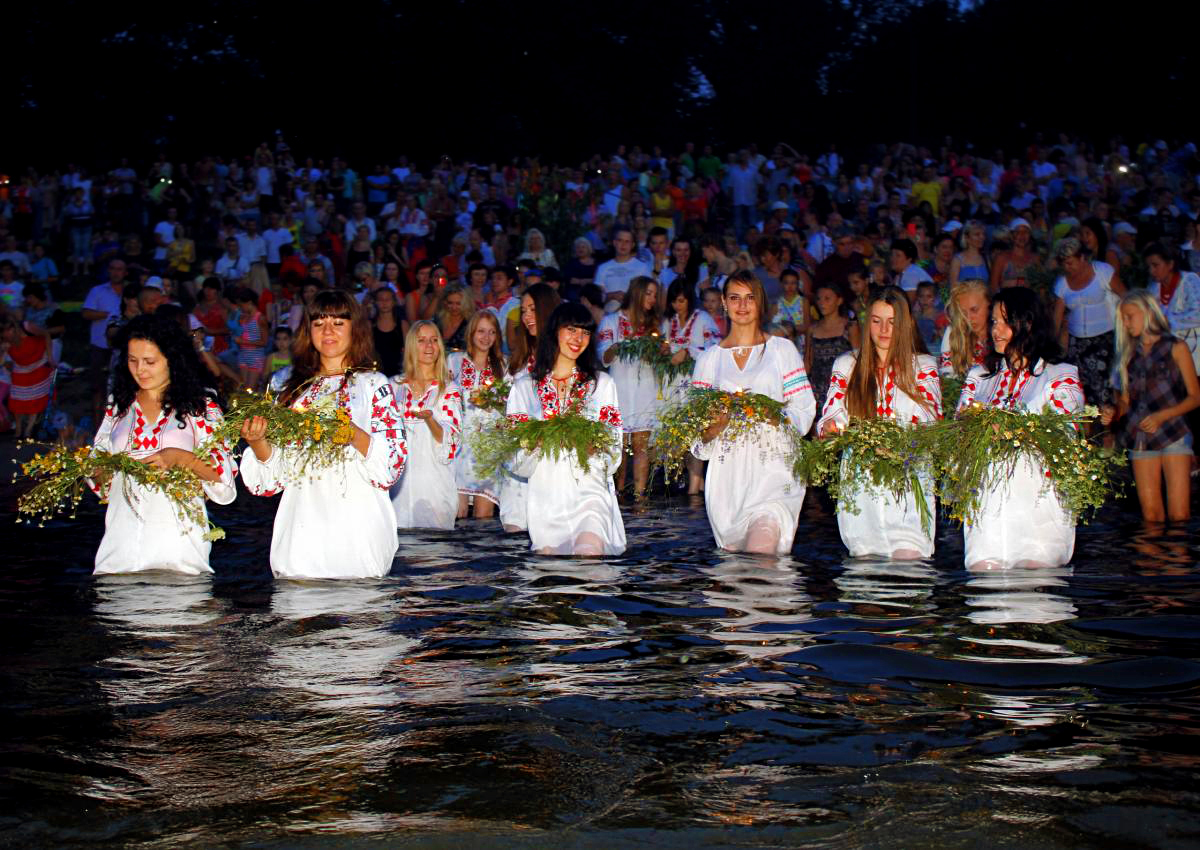 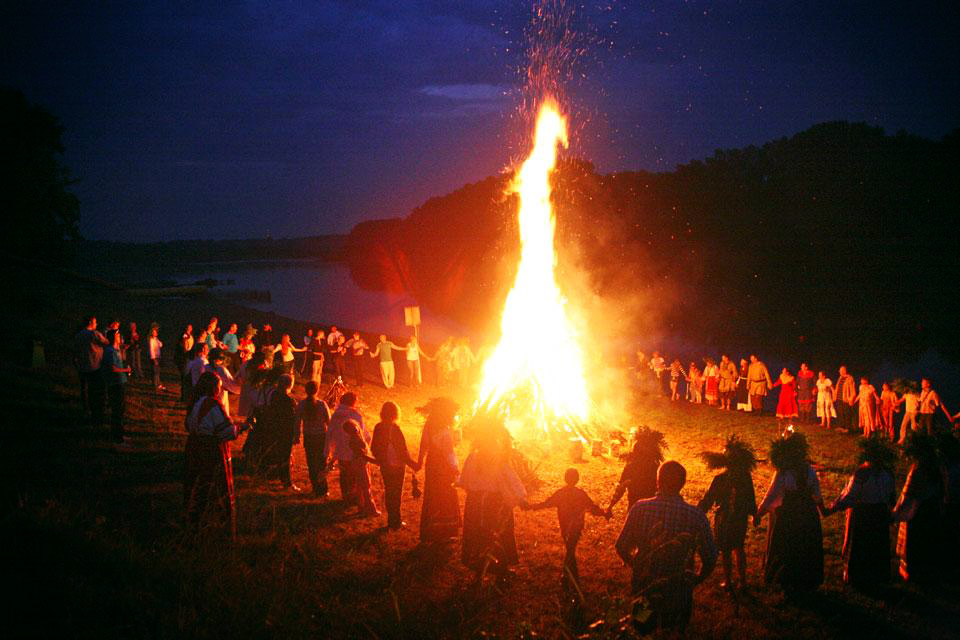 However, even without holidays there is something to do and what to see in Pirogovo. It is perfect for photo shoots, dinners in the Ukrainian style, walks.

History of the Ukrainian village of Pirogovo

In 1917 Nikolay Bilyashevsky, archeologist-ethnographer, head of the Central Committee for the Preservation of Ancient Monuments and Art and director of the Kiev Art-Production and Scientific Museum, suggested creating open-air exhibition of architectural monuments in Ukraine. However, troubled revolutionary time, when power passed from hand to hand, buried the original idea.

Seven years later, already under the Soviets, it was Academician Mikhail Hrushevsky, the former head of the Central Rada, who was engaged in scientific work at that time and remembered about the plan. He suggested creating a museum of national life, which would show visitors the material culture of the Ukrainian lands – from the Paleolithic to modern times, on the outskirts of Kiev. Grushevsky believed it would be worth recreating even the interiors of the cave dwellings of old times. But the academician was in disgrace, and they did not listen to him.

40 years later, the idea was resurrected again. The impetus was the construction of the Kiev Hydroelectric Power Station and the artificial reservoir that was created there in 1964. The inhabitants of many villages were taken from the flooded territories, but unique buildings were left under water – some of them reached 300 years of age.

Petro Tronko, high-ranking official, head of the Society for the Protection of Monuments of History and Culture, those years – Deputy Chairman of the Council of Ministers of the Ukrainian SSR on humanitarian issues was the main supporter of this venture. With the support of Tronko in February 1969, the Republican Council of Ministers decided to create a similar museum on a national scale, for which the land on the outskirts of Kiev was allocated.

The next seven years, the museum staff traveled around Ukraine searching for future exhibits. If found, the building was carefully disassembled and transported to Kiev; here it was reassembled, and even restored. For this purpose, they even created a republican construction and restoration workshop and a restoration department at the museum.

This approach gave a unique result: almost all of the current exhibits of the museum are originals. Among them are real rarities. 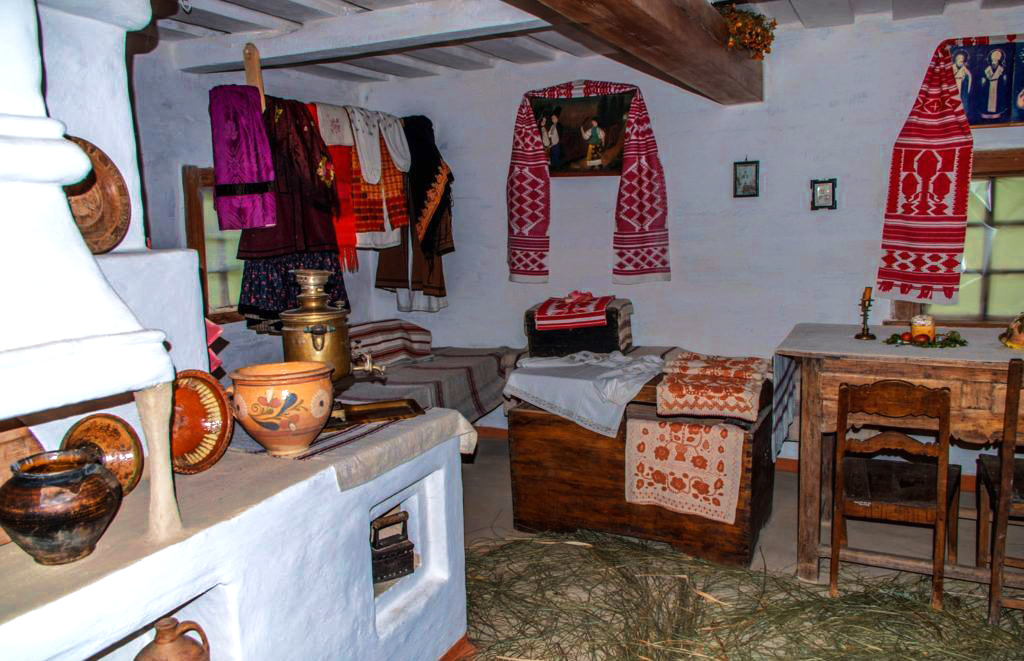 According to Pavel Fedaka, the current director of the Museum of National Architecture and Rural Life of Ukraine, these include, first of all, a hut from the Volyn village of Samara, built back in 1587. “This is not only the oldest exhibit in the museum, but also the oldest monument of folk architecture in Ukraine,” says the director.

In addition, from the expeditions ethnographers brought ancient temple, built in 1600. It was found in the Fastiv district of Kyiv region. And in the mouth of Desna River, scientists delivered a pagan ritual oak of the XII century. In the branches of this cult in the literal sense of the word tree, even the jaws of wild animals inserted there by the ancient pagan Slavs have been preserved.

Many of the museum’s future exhibits were not abandoned; they had to be bought from their owners. According to Nikolai Khodakovsky, one of the participants in ethnographic expeditions, on average, one building was inexpensive – about 500 rubles, that is, about four monthly salaries of a Soviet engineer.

However, sometimes there were rather tricky incidents: for example, Khodakovsky somehow recalled how residents of one of the villages of the Ternopil region refused to give the museum workers a wooden church built in 1817, mistaking them for crooks. As a result, ethnographers were locked in a cellar. Only after long negotiations the villagers agreed to give the church to the museum.

By the summer of 1976, the exposition was ready, and the museum could be opened. The date has already been set, but there was no certainty that everything will work out.

In his memoirs, Academician Tronko writes: in June 1976, a few days before the official opening, Vladimir Scherbitsky, the first secretary of the Central Committee of Ukraine, wished to see the exposition personally.

The reason for such attention was that someone had reported to the head of Ukraine that the funds for creating the museum had been wasted, instead of exhibits they brought all sorts of rubbish in Pirogov, and the entire idea looks like “bourgeois nationalism.”

Scherbitsky came to inspect the museum along with a whole group of representatives of the republic’s top leadership. For such guests, the museum staff even demonstrated work of windmill and blacksmith shop. They managed to interest party executives: instead of the planned half-hour inspection of the territory, the leaders of the Ukrainian SSR spent four hours there.

On the area of ​​120 hectares 150 buildings were exhibited – half as much as today’s. Only four (out of the seven today) regions were presented: Poltava, Slobozhanshchina, Podolia and Polesye.

Shcherbitsky’s blessing did not last long. Soon the local communist leaders saw “bourgeois nationalism” and the “idealization of the patriarchal” in the museum’s activities. The ethnographers were offered to supplement the existing exposition with a demonstration of the achievements of the modern socialist village.

This task was a real challenge for museum workers, because they understood that the “socialist village” did not fit into the general idea of ​​the museum. They decided to place it in the eastern corner of the exhibition area, away from the main part.

According to the memoirs of the museum staff, they had to get creative to create all this “social realism”. They did not buy or transport modern houses (as a rule, they chose large and well-equipped), but made exact copies. Their interiors – furniture, dishes and consumer goods – consisted of the real products of enterprises of a particular region.

“This exposition reflects the great changes that have taken place in the lives of villagers during the years of Soviet power,” the Ukrainian Soviet Encyclopedia wrote with pathos in 1982 about the part of the museum that was of little interest to the Soviet visitor; it was called the Exhibition of Folk Architecture and Socialist Village Life.

The creation of museum took a lot of resources, labor and nerves of its staff, but in the first years of its work there was no large influx of visitors: it was inconvenient to get to Pirogov from the city. And even cheap tickets – 30 kopecks – did not change the situation. At first, the main visitors of the ethnic exhibition were schoolchildren, who were massively brought from everywhere.

Later, when they arranged a city bus route in the direction of the open-air exposition, things went better. A few years after the opening, the museum’s ticket office sold up to 100 thousand tickets annually. By the way, today, this figure, according to Fedaka, has grown about two and a half times, to 250-260 thousand tickets per year.

Fair days were the most popular among visitors then – as indeed now. In the Soviet years, they were timed to the All-Union holidays.

On such days, not only visitors but also folk craftsmen in national costumes came to the museum. They demonstrated their work and taught those who wanted to know the details and secrets of their crafts.

In Soviet times, foreign tourists also visited the museum – for example, during the Olympics in 1980, Pirogov became one of the mandatory points of the program of visits of foreign guests. However, before bringing foreign tourists here, the KGB hid all unreliable employees — they were sent on various business trips. And the rest was explained how and what can be told to the visitors. 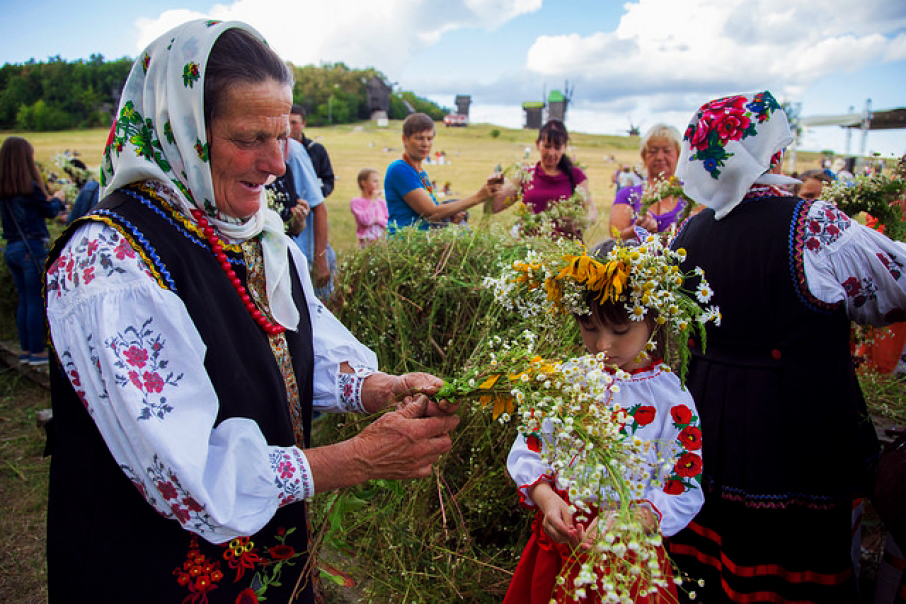 In due course the museum developed, and its fund replenished with all new subjects of a national life. In the last years of the USSR, the territory of the exposition grew to 150 hectares; there were 275 samples of folk architecture. Collection of vintage clothing, variety of household items and musical instruments consisted of 80 thousand exhibits.

The museum became the largest in Eastern Europe among expositions of this type, and later even entered the Book of Records of Ukraine. 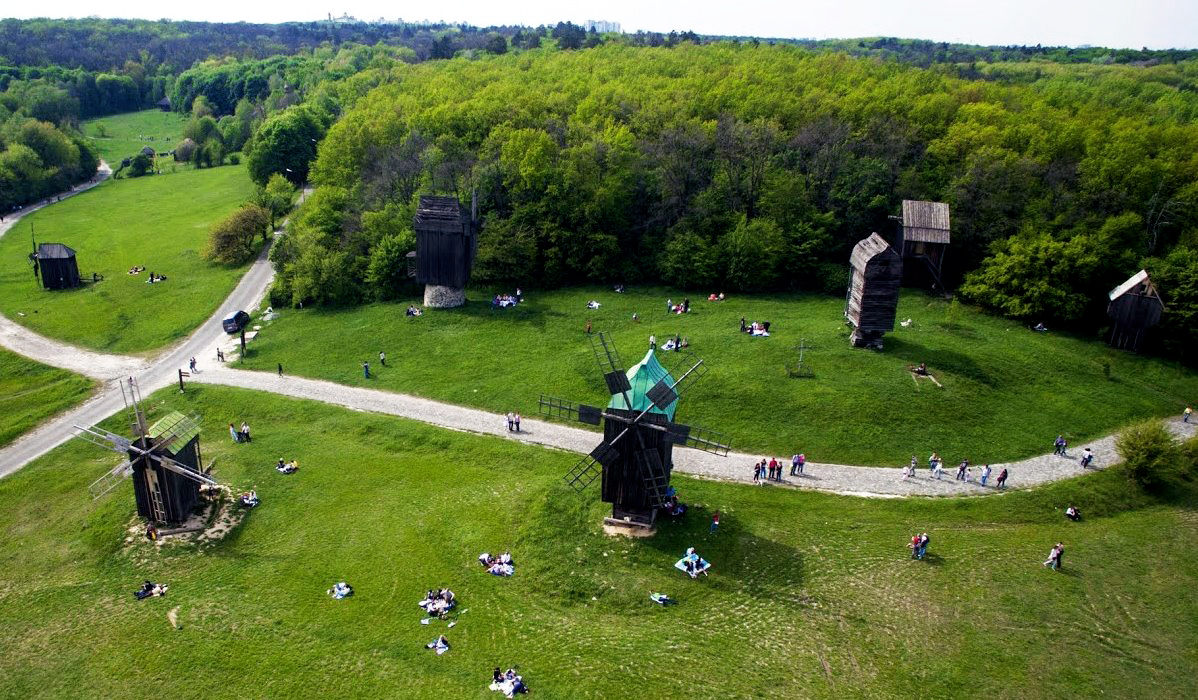 Having defended its right to existence in the Soviet era, the museum again faced problems in independent Ukraine. Several times local authorities tried to use the territory closely bordering the complex for the construction of commercial facilities. Only thanks to protests of the museum management and public attention, these plans never came to life.

Contact Kiev Guide to take a Private Tour to the Ukrainian Village: 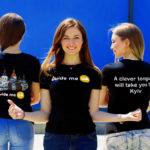 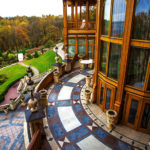