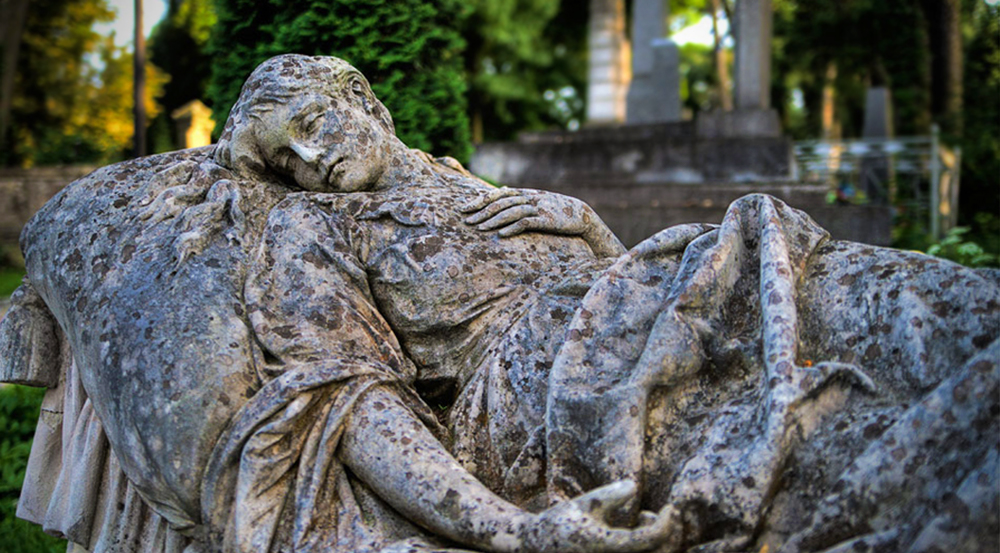 Lychakiv cemetery has existed since the 16th century, but even back in the 13th century, victims of the plague were buried here. It was officially opened in 1786, when the Austrian Emperor Joseph II forbade the burial of the dead in cemeteries near city churches. Then four cemeteries were opened on the outskirts of Lviv, of which only the Lychakiv necropolis has survived to this day. Now the entrance to the Lychakiv cemetery is located on Mechnikov Street.

However, it is almost impossible to find burial sites of 18 century. This was because in the middle of the XIX century the magistrate issued a decree, which included usage of stone crusher in the cemetery. Tombstones over graves relatives have not looked after for 25 years were then grinded into small stones, which were lined with paths, and later a cemetery gate was built.

For 230 years, the cemetery changed its appearances, the style of tombstones and sculptures, the inscriptions on the tombs in different languages; it has overgrown with greenery and the city from all sides.

There are also many legends about the cemetery 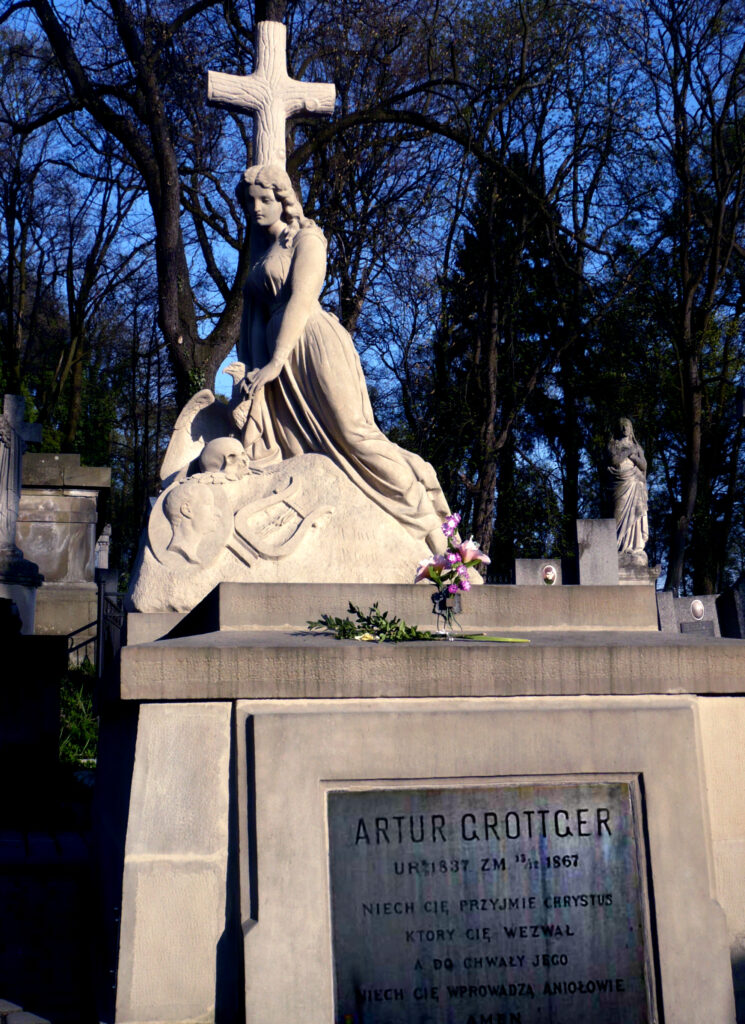 One legend tells that a woman in black clothes who does not have a face is often walking along Mechnikov Street that goes along the cemetery.

They say that for the first time she was seen by a young man who walked at night near the cemetery, and then other people told the same story.

People also frequently see lovers, walking along the alley and then simply dissolving in the air.

They say that this is Arthur Grotger and his beloved Wanda Monnet.

The story of their love ends with Arthur’s death from tuberculosis. Subsequently, Wanda sold all of her jewelry and part of the dowry to transport Arthur’s body to his homeland.

In 1868, according to his will, he was reburied at the Lychakiv cemetery in the place that he had once chosen during a joint walk.

Grotger’s beloved came to his grave until his death, although she later married Karl Mlodnitsky.

The crypt of Rosalia and Wanda Zamoysky, mother and daughter, who died tragically during a fire in 1902, is also a legend. 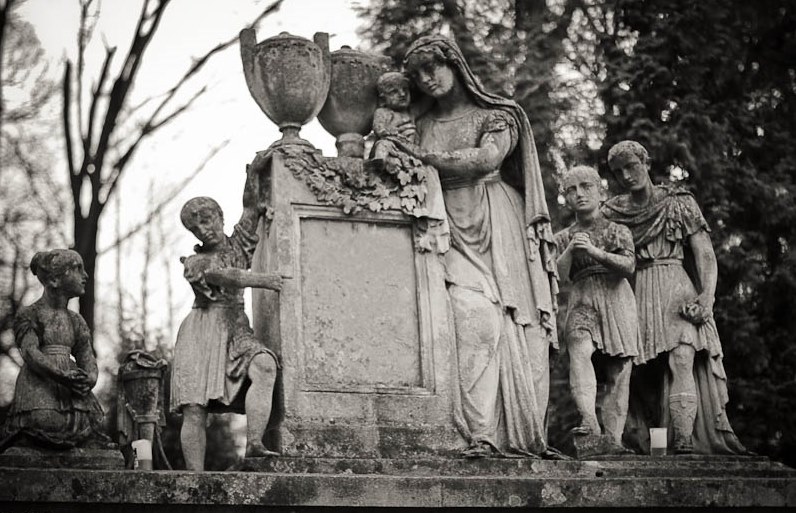 They say that while walking around the cemetery, visitors heard the noise from chains the coffins were hanging on, and that is in a hermetically sealed crypt. 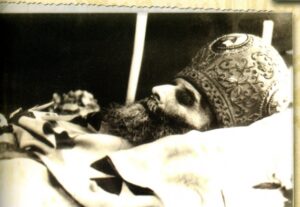 This is an unusual cemetery, here – every grave – a whole story or legend. And also a work of art.

People from different parts of Ukraine visit the cemetery and it is said that patients who could not be cured by traditional methods recovered after visiting the burial place of the bishop.

People who come here try to take at least a handful of earth from his grave – they consider it to be healing; because of that, museum workers have to add soil to bishop’s grave from time to time.

The area of ​​Lychakiv Cemetery is about 42 hectares; it is divided into 86 fields with more than 300,000 burials. The reserve has more than 3 thousand sculptures and monuments by famous architects and sculptors of the world. Among them are such outstanding masters as Tadeusz Barącz, Eugenie Dzindra, Vitold Ravsky and Paul Eutele.

This is a place of eternal rest for outstanding and unknown personalities of Ukraine, Poland, Hungary, and Austria. Many of the tombs are beautifully decorated with sculptures and are real masterpieces. They are valuable architectural monuments and are famous for interesting stories of their creation. Each monument has certain symbolic subtext. For example, cut tree branch is a symbol of a young life that broke off in an instant. The sculptures above the tombs convey many interesting elements that tell about the content of the life of the deceased.

The oldest tombstones of Lychakiv Cemetery. Left gravestone is from the burial of 1675, right dates back to 1789. 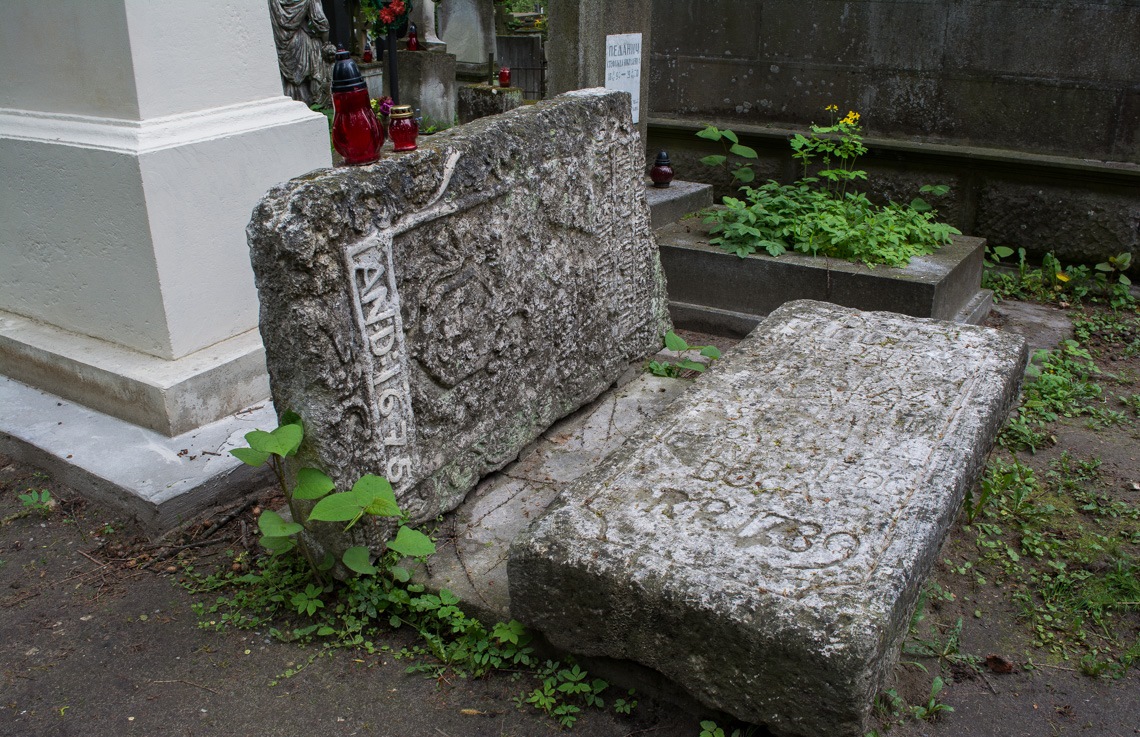 Below is the tombstone of the grave of 1797 with an inscription in Latin.

In Lychakiv Cemetery, one can also find inscriptions in Polish, Russian, Ukrainian, Romanian, Greek and other languages. It shows the ethnic diversity of old Lviv. 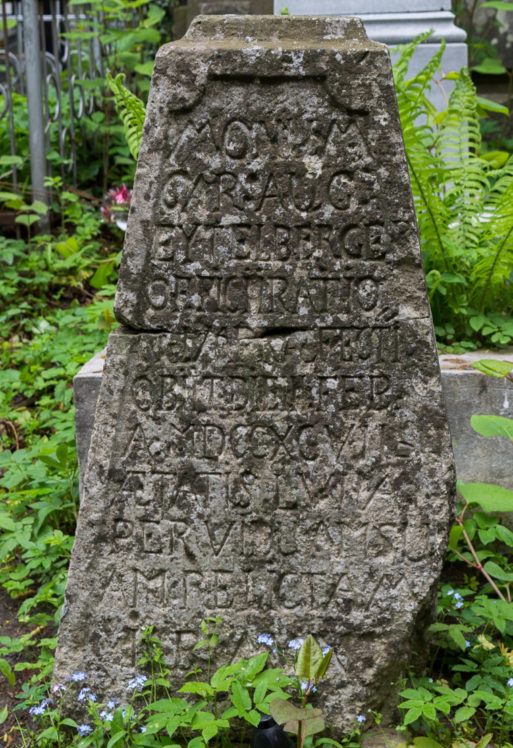 The 19th century grave is presented below as example of memorial art. This is mainly the grave of Lviv Poles. 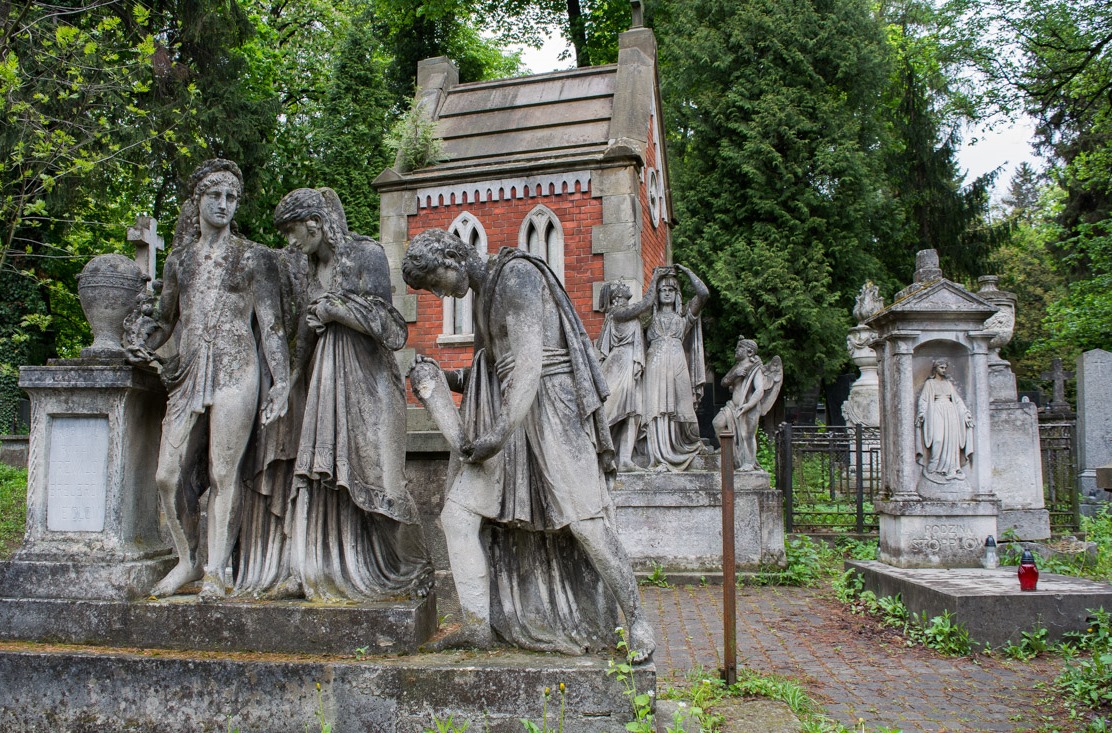 Tombstone of the Lviv Archbishop of the Armenian Church Samuel Kirill Stefanovic (d. 1858). 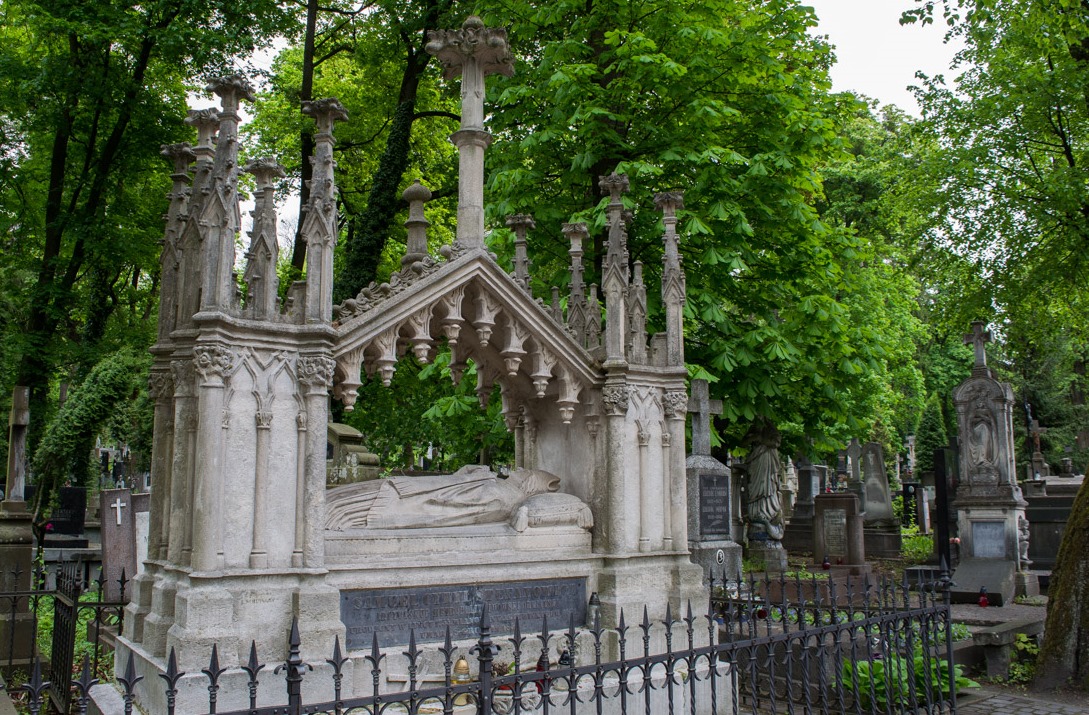 In addition to usual graves and small crypts, the cemetery has several chapel-tombs. 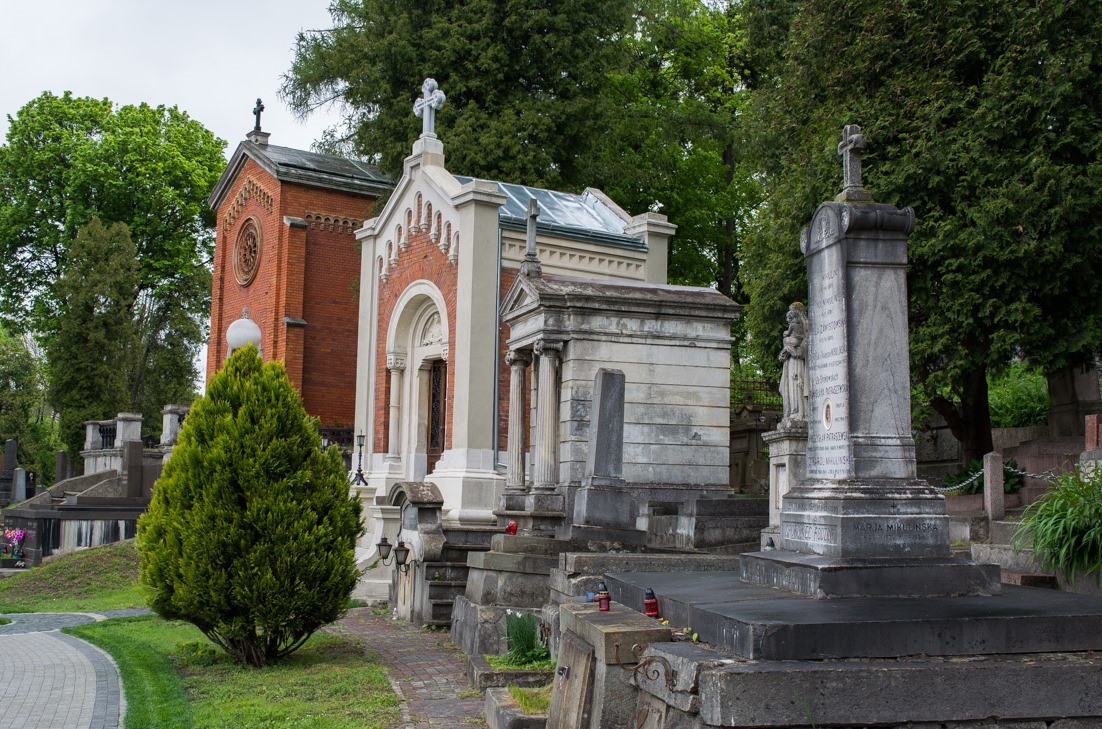 Franz Masoch (d. 1845), professor of medicine, head of Lviv University, is also buried here. His grandson Leopold, born in Lviv, became a famous Austrian writer. In his books, the theme of the mockery of a despotic woman against a weak man, who enjoyed it so much, appeared so often that the name of the writer served as the name for sexual deviation – masochism.

The memorial dedicated to the Polish uprising – 1863-64. It is located on a small mound in the depths of the cemetery, the so-called hill of rebels of 1863. It has rebel sculpture and memorial plates in the center, graves with typical crosses are behind. 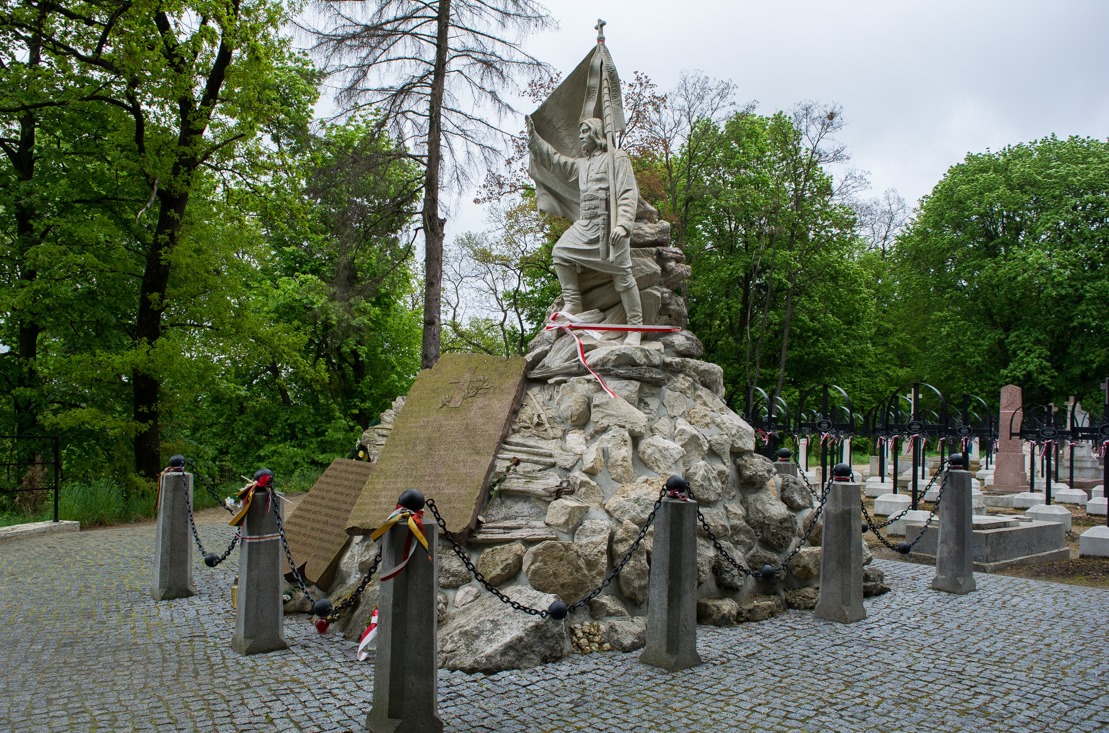 In general, everything is saturated with the spirit of Poland, which is absolutely natural.

The largest Polish memorial of the Lychakiv Cemetery is the “Lviv Eagles Cemetery”. Poles, sometimes teenagers who died in 1918 during the defense of Lviv from… Ukrainians, more precisely, the army of the Western Ukrainian People’s Republic (Ukrainian Galician Army), as well as during the Soviet-Polish War of 1920 are buried here.

The first memorial here was created in the 1920s, but it was destroyed by the Soviet authorities after the Second World War. That is, Soviet authorities did almost same with the Polish graves as the Poles did with the Hill of Glory. Work on its restoration began in the 1990s, but was slow due to conflicts with the Ukrainian authorities.

In addition to the Poles, the remains of volunteer pilots from the USA and military advisers from the French mission under the command of Charles De Gaulle, who fought as part of the Polish troops, are buried here. 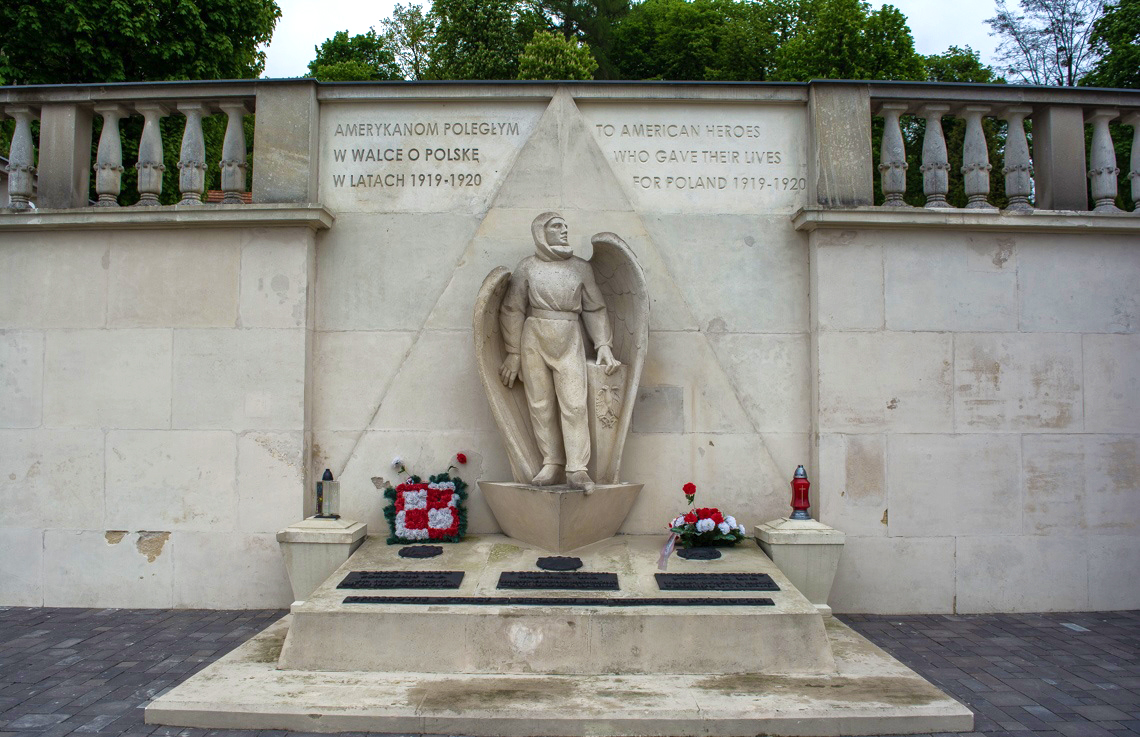 One of the founders of the Russophile movement in Galicia, Greek Catholic priest. Because of his Russophile activities, he was persecuted by the Austrian authorities. As one of the “active members of the Russian party”, he was expelled from Lviv and deprived of his parish. He was a Slavophile, popularized Ukrainian language, for which he is now revered in the west of Ukraine. 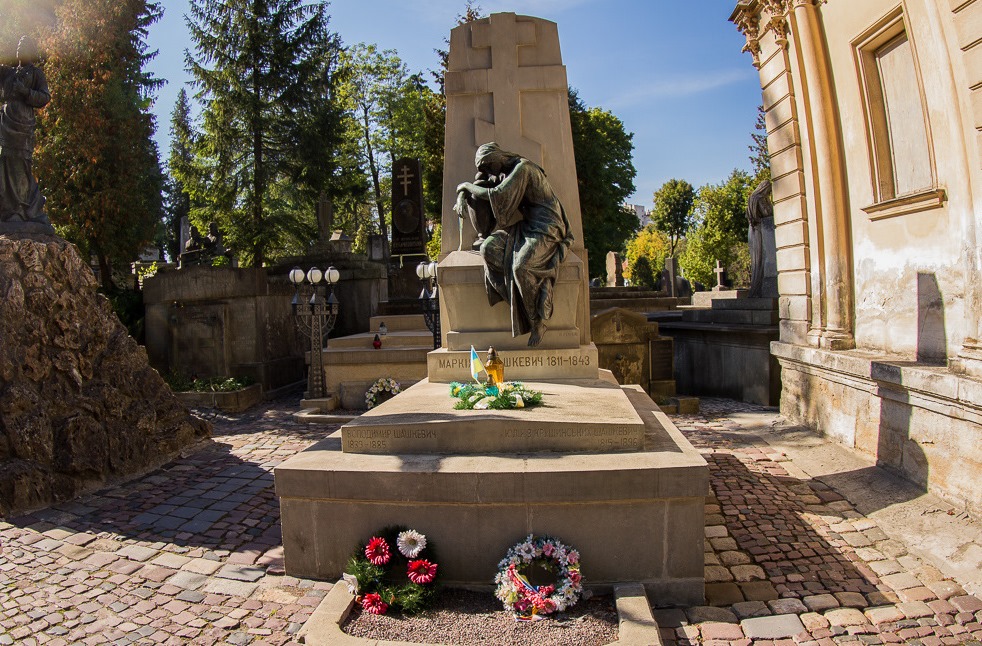 One of the most famous Ukrainian writers and poets. After his second arrest in 1880, Franco nearly died of starvation. Then for a week at the hotel, he wrote his novel “At the Bottom” and sent it to Lviv having used the last money he owned. After that, he lived for three days for three cents he found on the banks of the Prut River; that would be enough for one loaf of bread. When there were nothing left, he lay unconscious. It was old hotel attendant who saved Franco from starvation. Poet died on May 28, 1916. 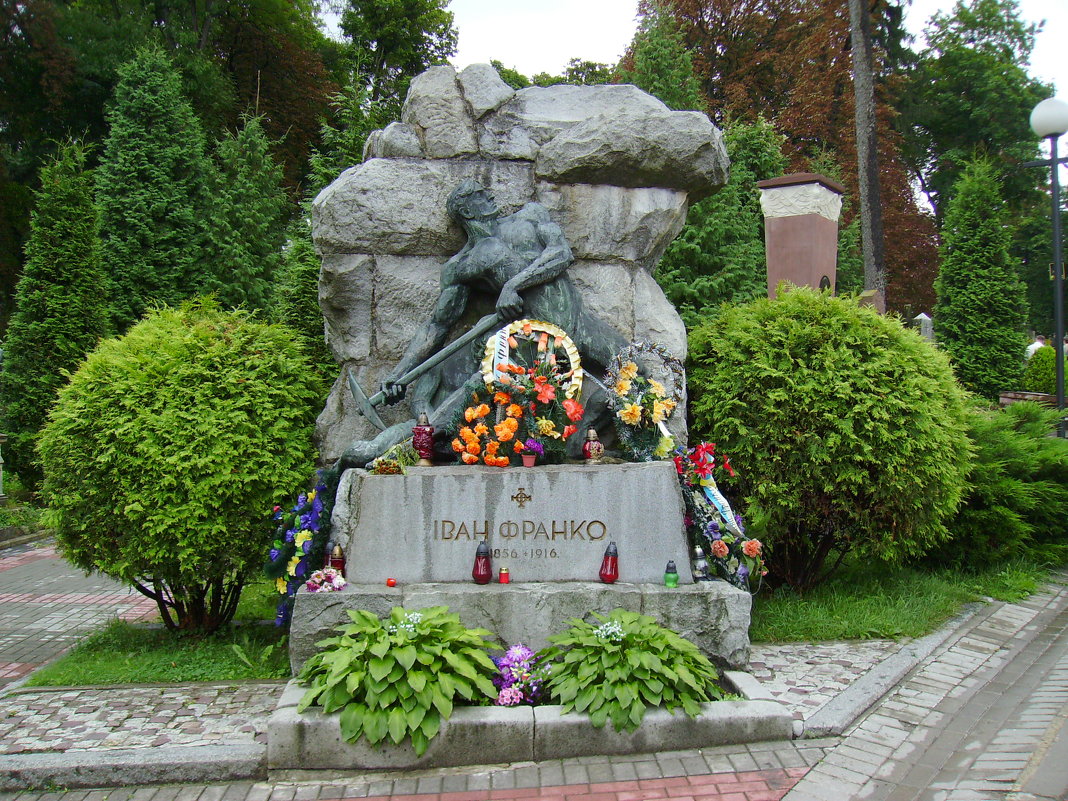 Monument on the grave of the famous opera singer Solomia Krushelnitska (d. 1952). She performed in the best theaters in the world. During her lifetime, Solomia Krushelnitska was recognized as an outstanding singer of the world. She possessed a voice of a wide range, outstanding in strength and beauty (about three octaves with a free middle register), musical memory (she could learn an opera role in two or three days), and a bright dramatic talent. The repertoire of the singer totaled more than 60 different role. Among her many awards and distinctions is the title “Wagnerian prima donna of XX century”. The Italian composer Giacomo Puccini presented the singer with his portrait with the inscription “to beautiful and charming Butterfly.” 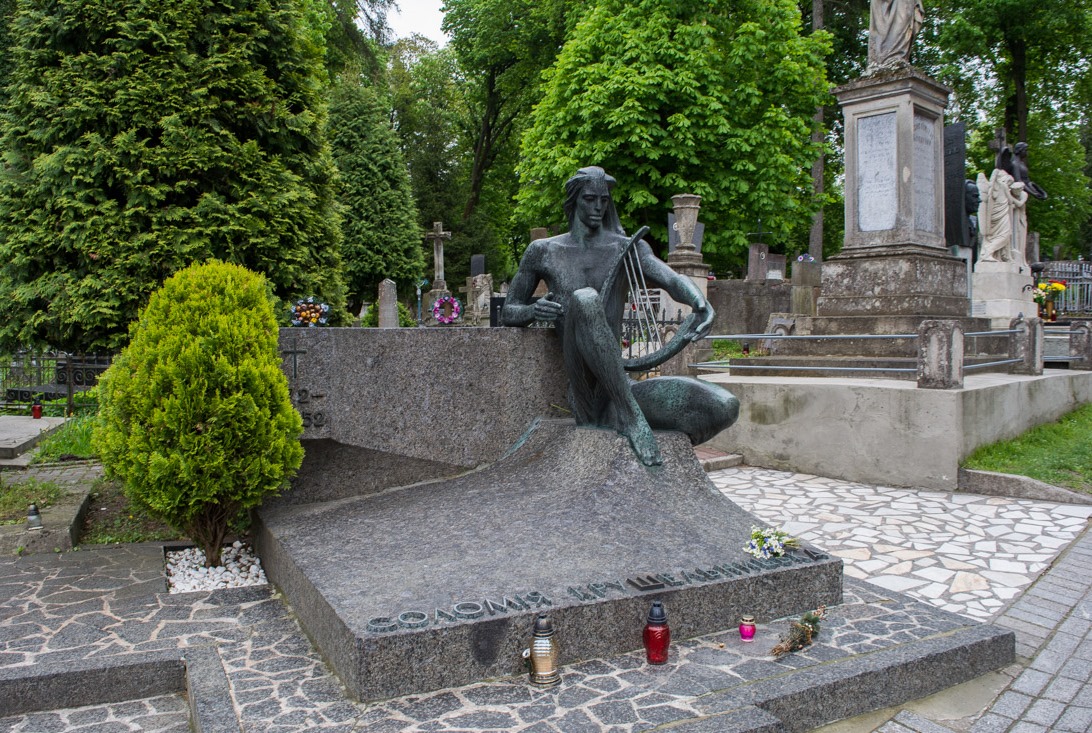 World champion and champion of two Olympic Games in gymnastics. He won 11 medals, seven of which are golden. Yakiv Chaika created a monument on his grave. 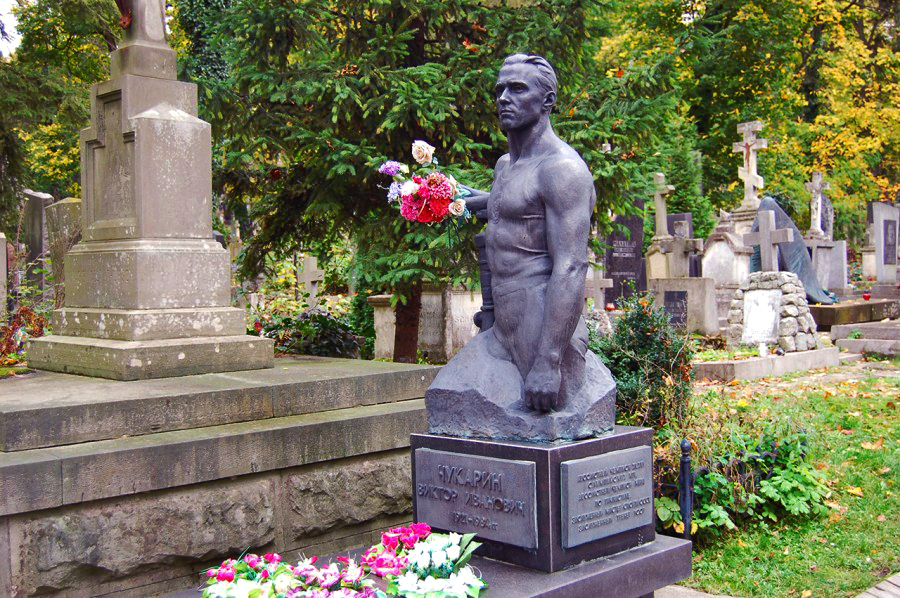 Composer, folklore specialist, teacher, Doctor of musicology. His tombstone at Lychakiv Cemetery in Lviv was create in ten years after his death. 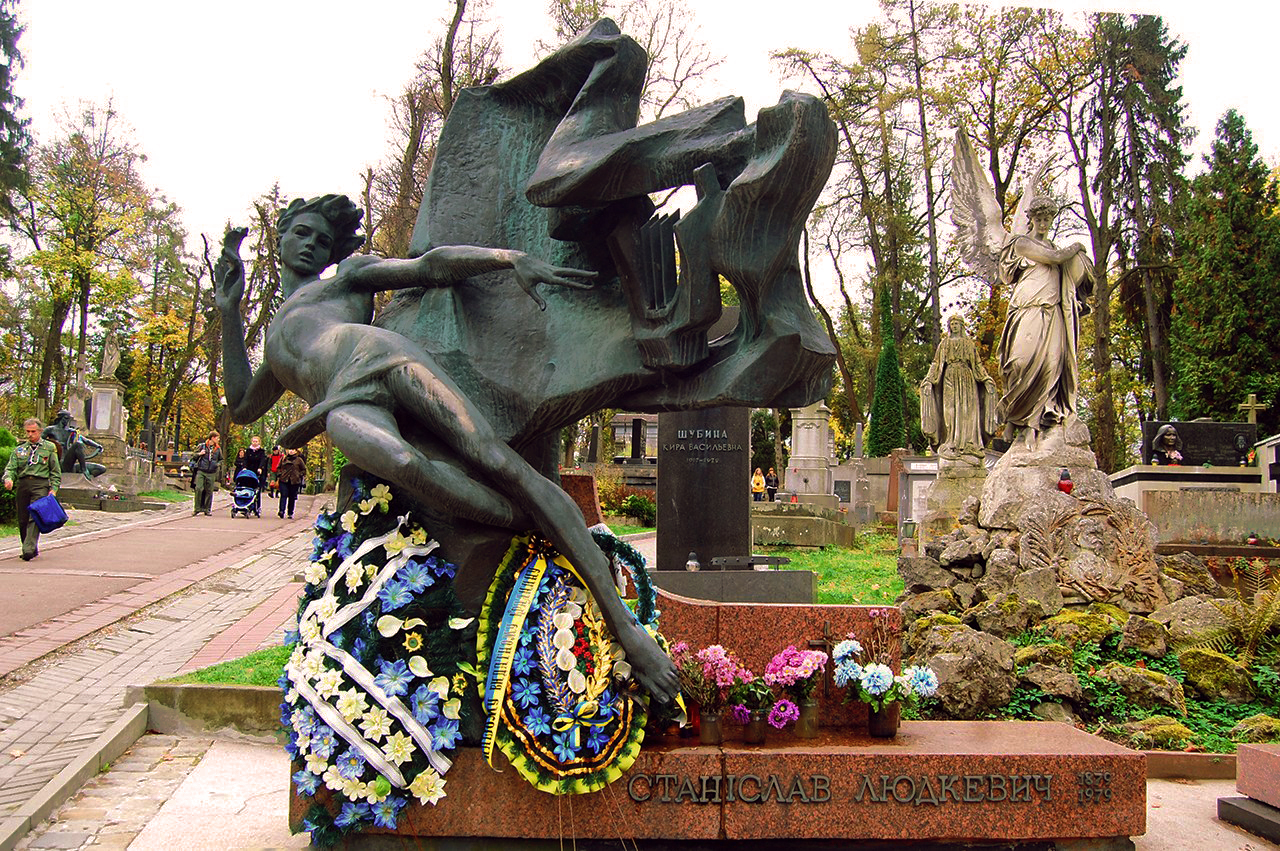 The famous Ukrainian composer. By the way, he is the oldest Ukrainian, buried at Lychakiv Cemetery. People say that at the age of 100 years he was traveling by a bicycle. 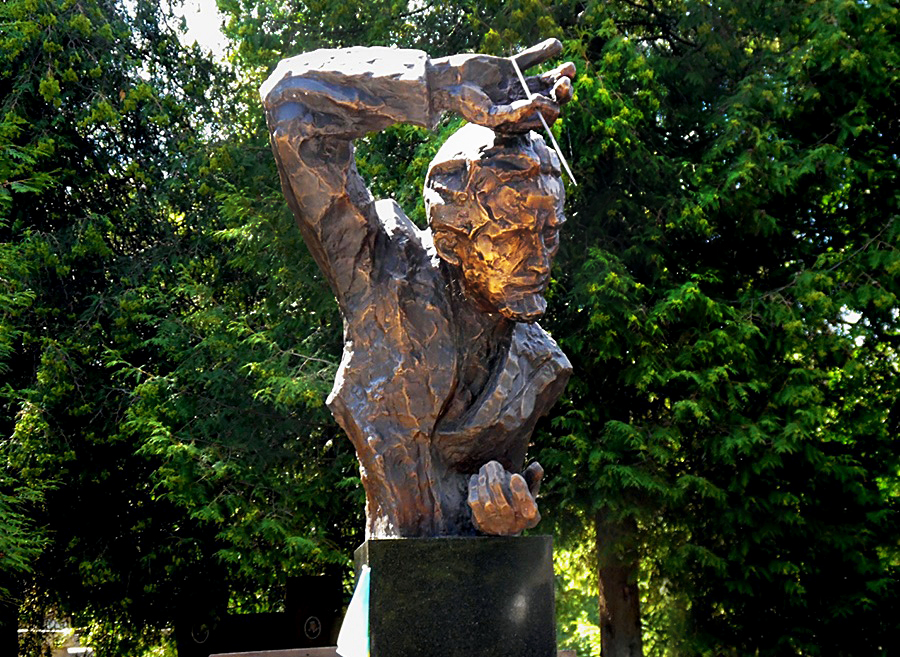 Ukrainian composer, a poet, head of the legendary group “Vatra”. His grave you can see as soon as sign to the cemetery area – a white angel that reads music notes. 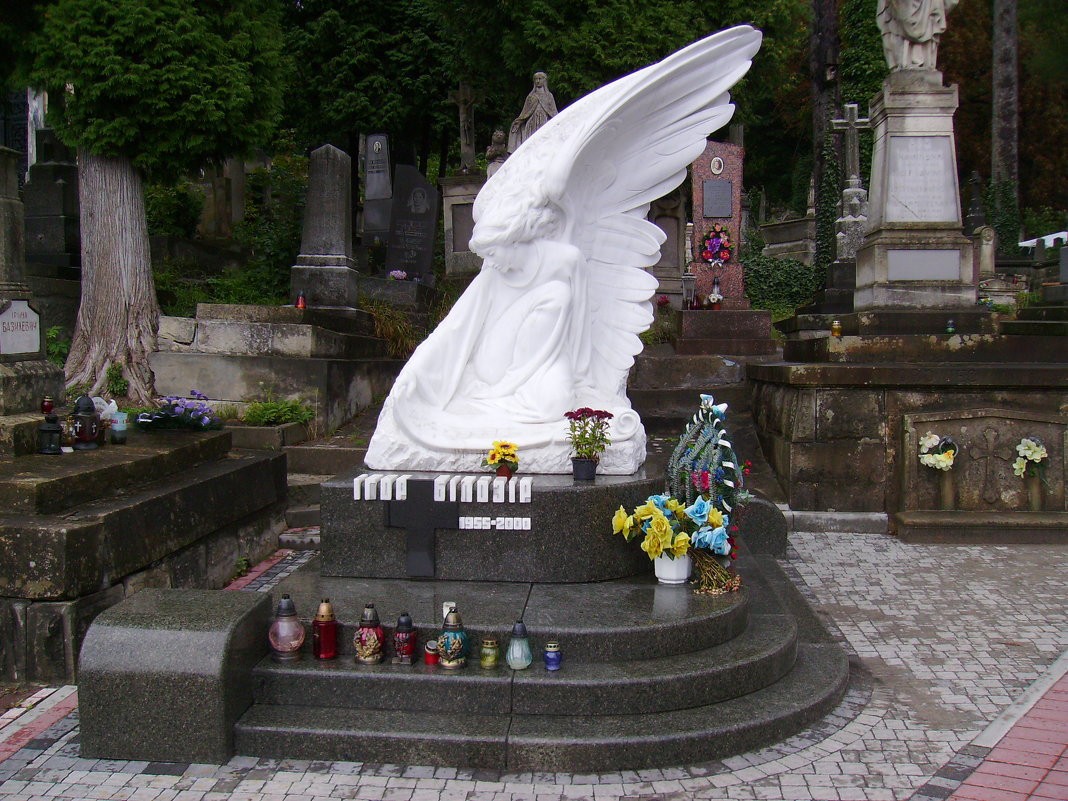 Composer, poet, true legend of Ukrainian pop music. For a very long time, the authorities did not allowed to install the monument. The bronze composer near the grand piano appeared only in 1990. 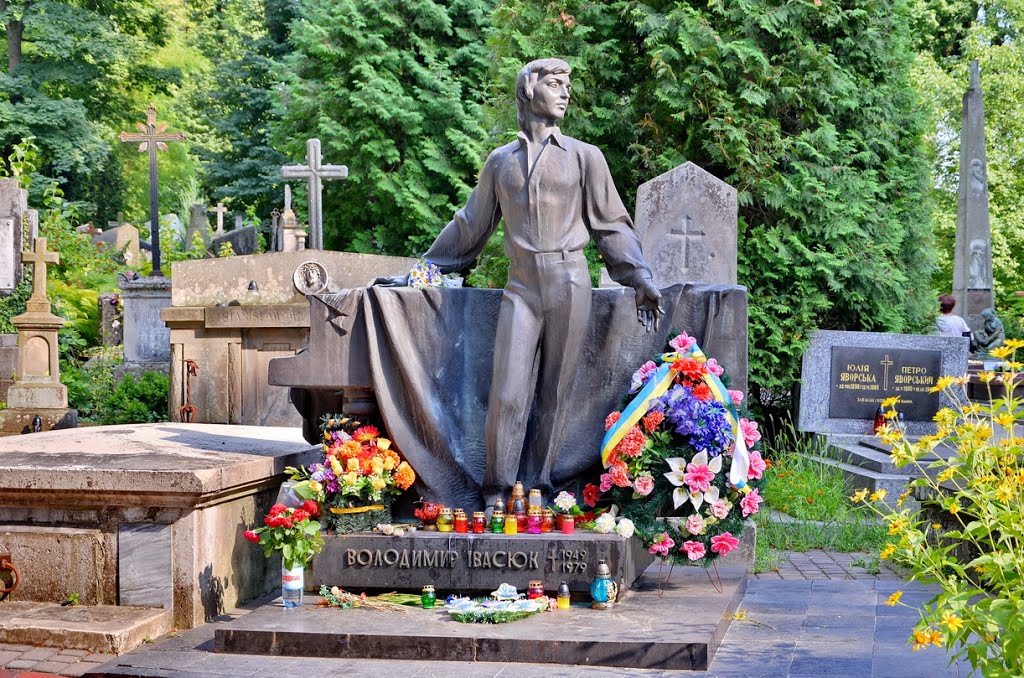 Many visitors to this place daily study the history of the museum. Fascinating excursions are often held here, and night walks around the cemetery are especially popular. On dark starry nights, wide illuminated alleys allow you to plunge into an unusual atmosphere full of mystery and silence. At night, everything here seems to remind us that we must behave calmly and peacefully so as not to disturb the local peace. The idea of ​​conducting night excursions appeared not by chance. Once during a memorial service in the evening, a stunning view opened in front of everyone present: hundreds of candles and icon lamps placed on tombs flickered picturesquely, like reflections of the souls of people buried here.

We offer you a walking Tour of the Lychakiv Cemetery, historical open-air cultural reserve and museum.

During the tour, you will see: 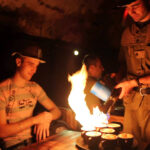 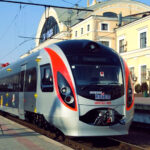 How to travel from Krakow to Lviv