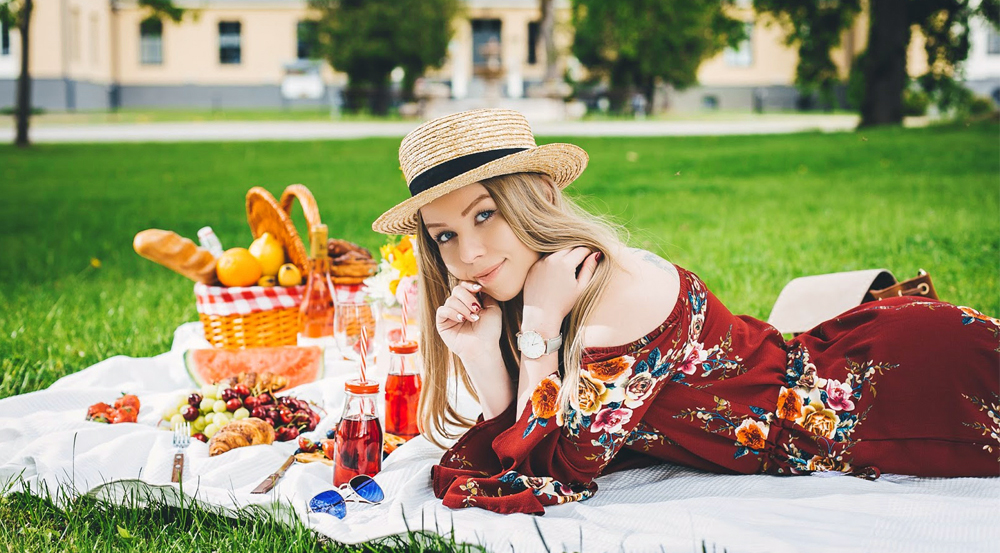 Top 10 Parks in Kiev where you should Take a Walk

Many of us like to walk in the parks, taking the air and enjoying beautiful natural places and panoramas of the city. Therefore, I made this list of Kiev parks for such walks for Kyivans and guests of the city.

Parks in the city

The Vladimir Hill is a hill on the right bank of the Dnieper with a monument to Prince Volodymyr the Great, stairs to the upper and middle terraces of Mikhailivska Mount and a beautiful park. The monument stands here since 1853 and symbolizes the “heart” of Kiev. You can get on the hill in two ways: use the funicular from Poshtova Square or walk from the Ukrainian House. In the park there are several sculptures, pavilions, benches, lanterns. There is a beautiful view of the Dnieper and the opposite shore. Previously, there were regular city flower shows. 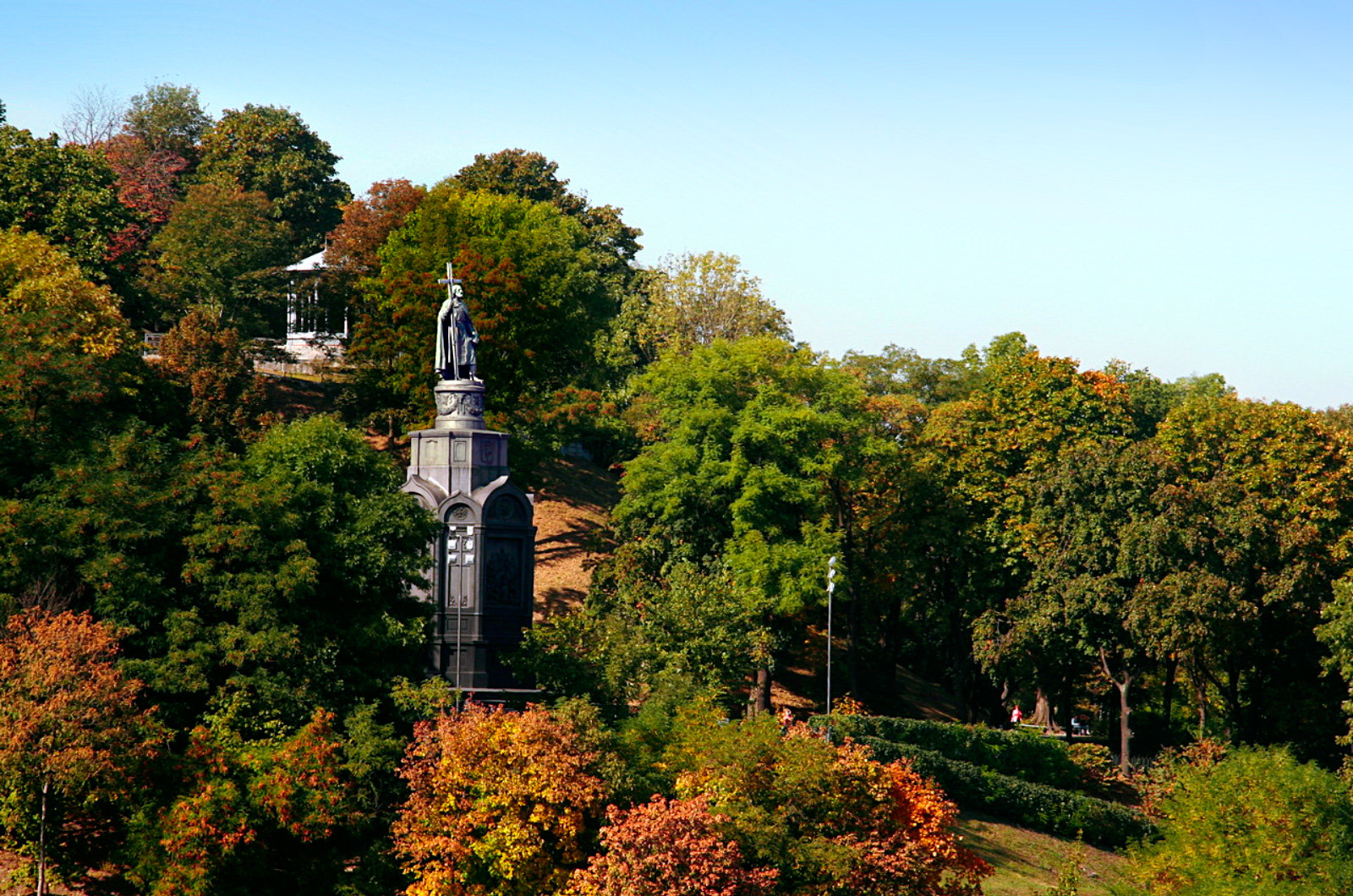 Park named after Taras Shevchenko is perhaps the most comfortable and “proper” city park. However, it is at the same time the smallest of all that exist today. Ivan Linnichenko, Professor of the Odessa University, says that the University Square was created thanks to the Emperor of Brazil, Don Pedro. Having visited the university, he was surprised that in front of the main building of the educational institution there is such an ugly wasteland with cows grazing and lying in puddles. The guest advised Alexander Bezak, governor of Kiev, Podolsk and Volyn to spend money and make this area comfortable.

In 1896 a monument to the Emperor Nikolay I was constructed here; earlier it was he who ordered to establish the University of Kiev; the park was renamed into Nikolayevsky.

The alleys of the park were decorated with white stone sculptures; they were put on pedestals of round pools, as well as on a parallel alley behind the monument. Back in the late 1950s, they caressed the eye with their innocence and chastity, and in the early 60’s were destroyed as a “hotbed of vulgarity.” In 1920, the park has got new name – Red Park, the statue of the tsar was removed and melted, and a granite pedestal with bas-reliefs stood still for 20 years. In 1939, a pompous monument to Taras Shevchenko was placed there; the poet wears a coat and holds the other one in his hands; this is when the park got its modern name. And a few interesting facts – in the park there is a fountain in the form of the Black Sea (recently renewed); there is a place where chess players-amateurs gather for many years; and this is the location of the oldest public toilet in the city that was built before the revolution. 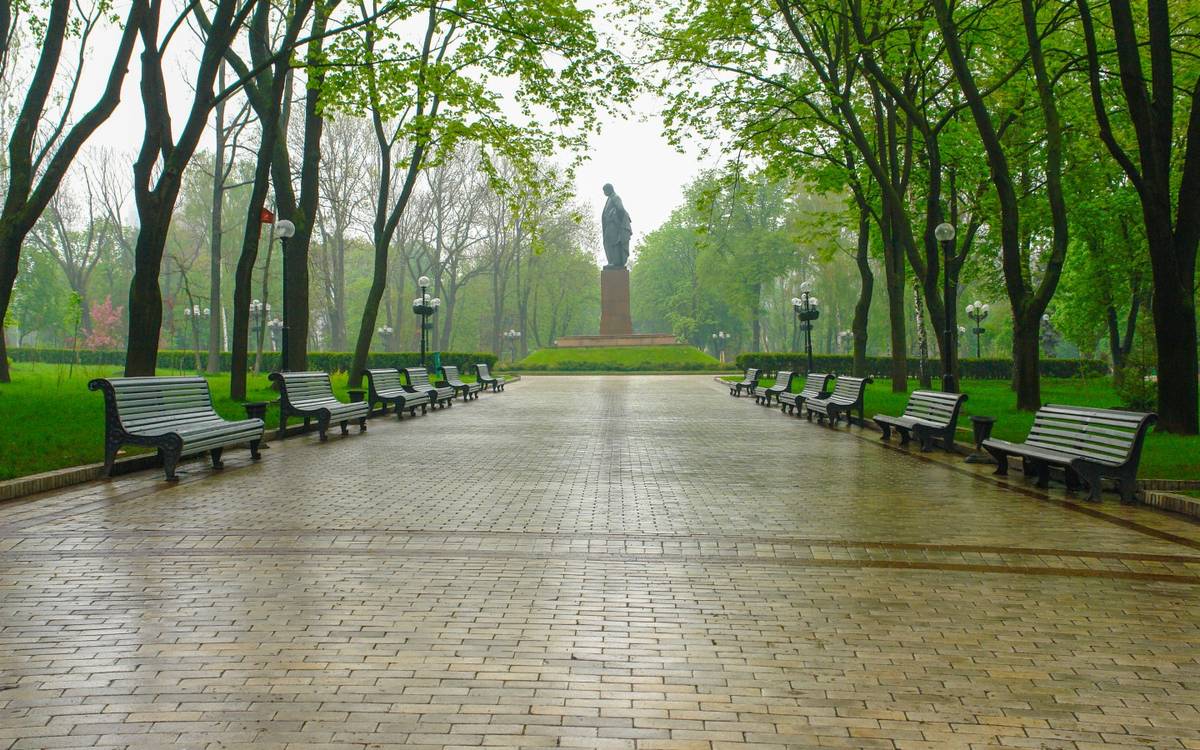 In 1874, Empress Maria Alexandrovna, the wife of Nikolay II, ordered to make Mariinsky Park in front of Mariinsky Palace. Before that, there was a parade ground for military exercises. Now everyone can relax here.

Creation of a regular park in the English style was funded personally by the Empress. Its area was 8.9 hectares. After a while, the park changed its appearance thanks to bushes and ornamental trees planted here.

It is worth noting that some of their varieties can be seen here even now. Initially, the park was called the Tsarsky (Royal) and only after a while it was renamed to honor its founder into Mariinsky.

Although there is another version that states that the name was given to honor another noble person – the mother of the last emperor Maria Feodorovna. She lived in Kiev for two years and was remembered for organizing hospitals and sanatoria to treat the soldiers who were injured in the battles of the World War I.

The Dowager Empress had to leave the Kiev residence soon after the revolution began. At the end of the 19th century, a cast-iron decorative fountain appeared on the territory of the park; it can still be seen today. 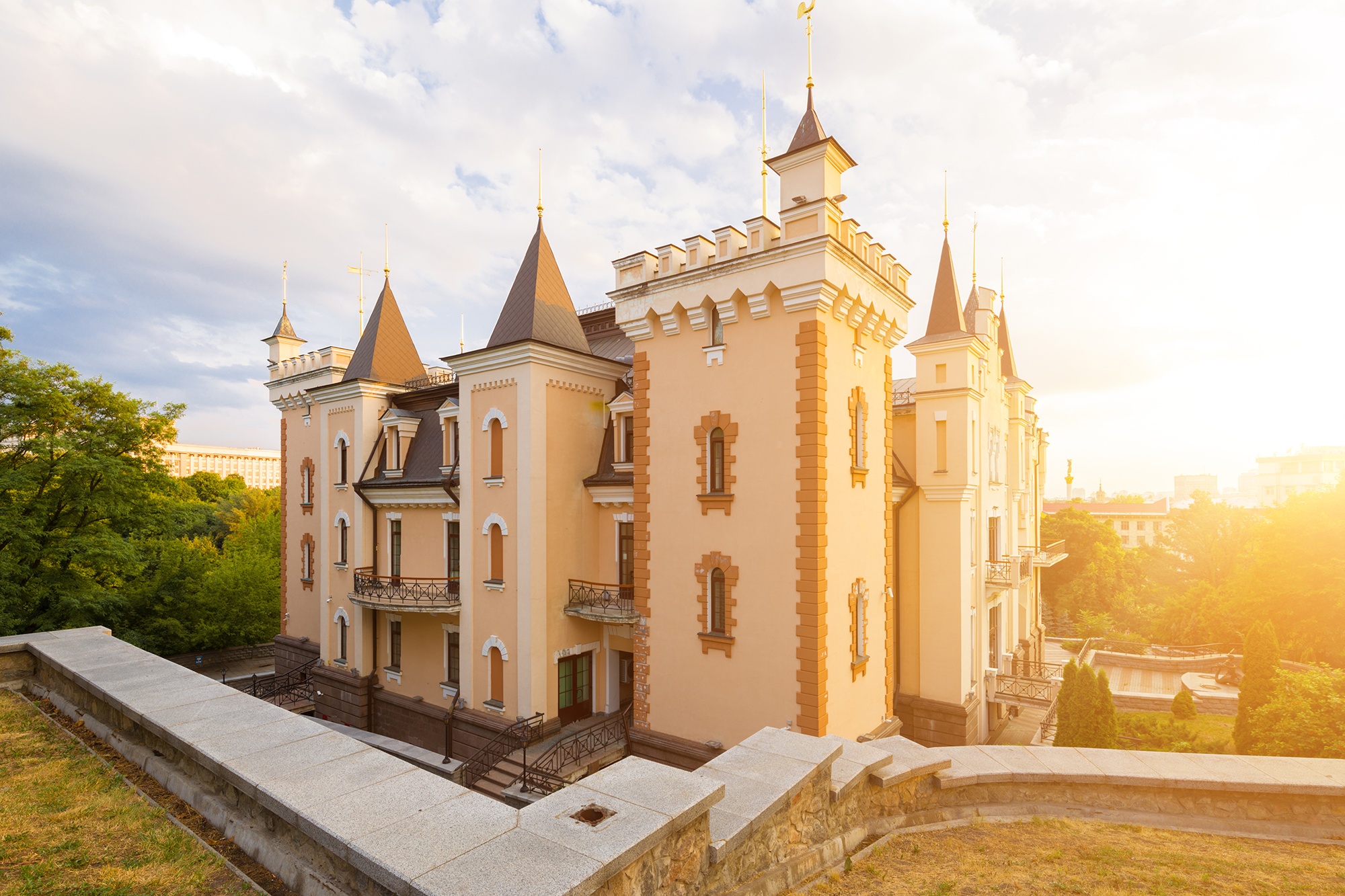 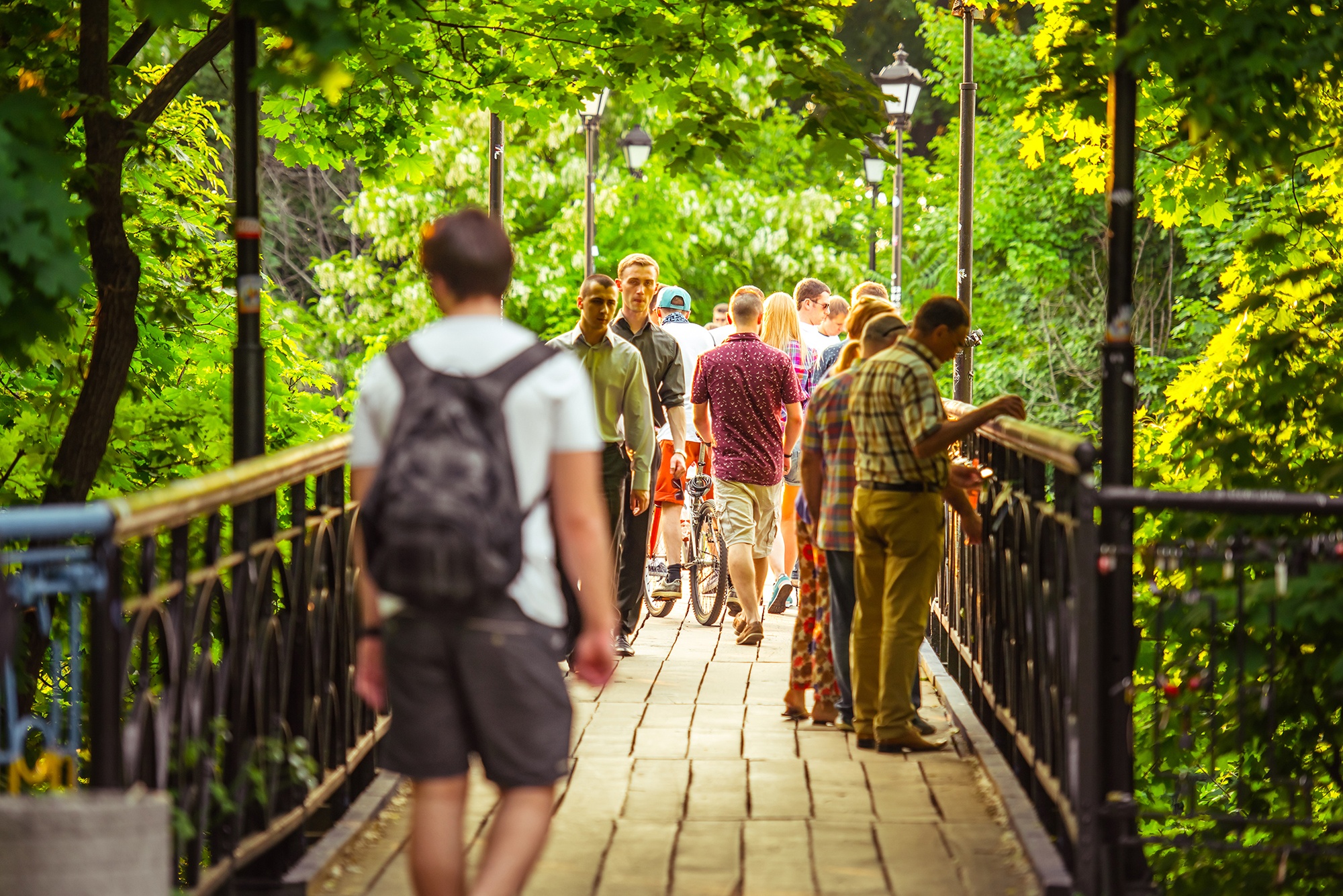 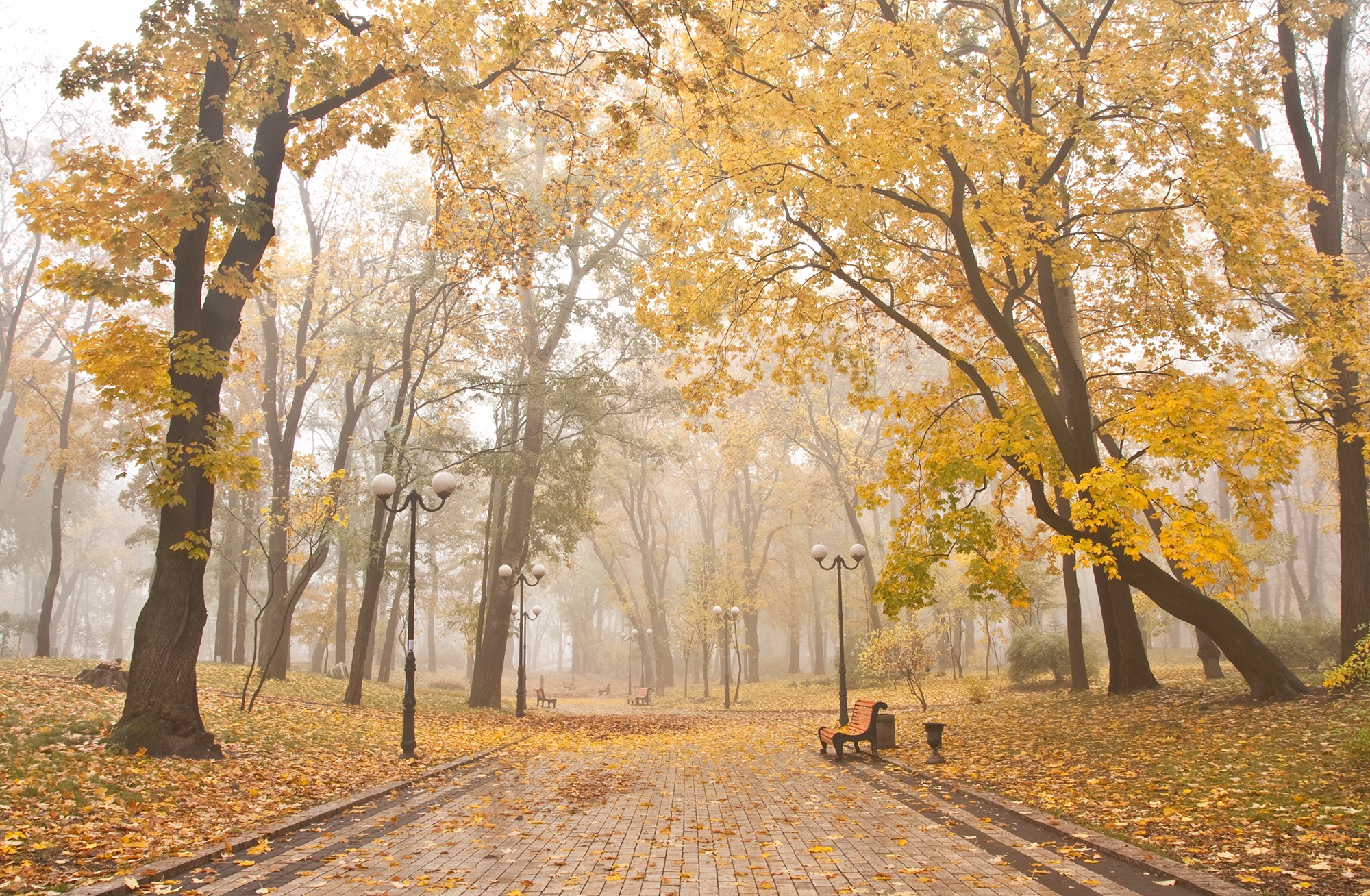 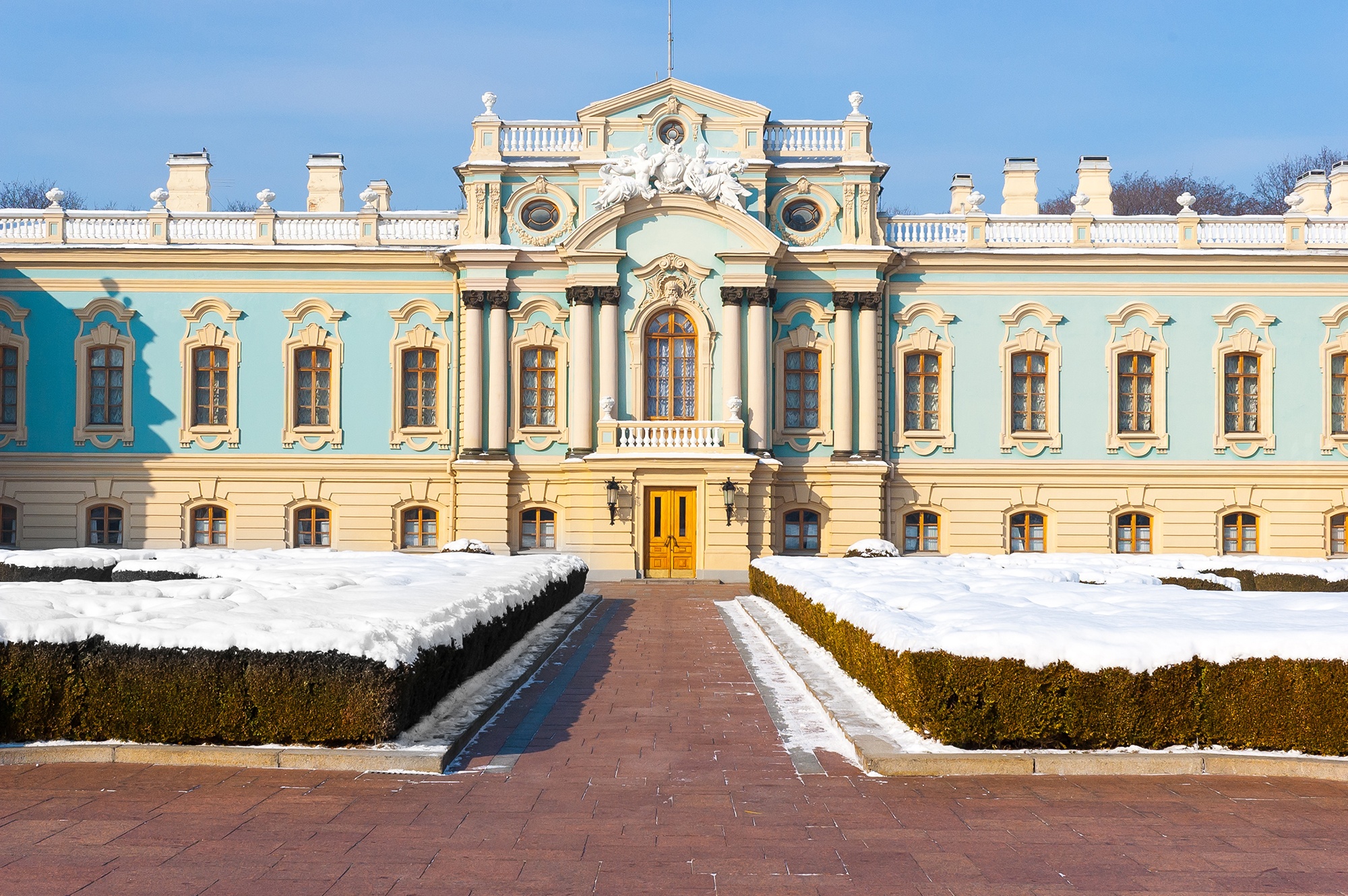 Nowadays the Mariinsky Park is a very good place for rest and walking and enjoys extraordinary popularity among the people of Kiev.

Holosiivsky Park is a wonderful place. It is not particularly pretentious, but almost in the center of Kiev you can find an oasis of wood where you can enjoy a picnic or sunbathe on the lake shore. By the way, there is not one but three lakes, and there are several more behind the Agrarian Academy. However, the park behind the Academy is not a park area; that is Holosiivsky forest. The park is usually clean because it is cleaned every other day.

In the Park for Recreation and Leisure named after Rylsky (the official name of Holosiivsky Park), there are benches on the main alleys. You can sit there to rest with a book in the shade directly at the lake. By the way, the lower alleys are shady and cool in the heat. In general, the place is wonderful, especially to go on a picnic or for walking with children. Due to the fact that young moms with strollers like to walk in the park, the other unofficial name of the park is “stroller’s paradise”. It is so nice and cozy here that people come here from all over Kiev, although Kiev is not small and there are plenty of parks in it. I met families coming to walk with a stroller from Troyeshchyna. There are several good playgrounds in the park, two of which are in a pine grove; the attractions are rather modest, but this is enough to please kids. On the first lake you can rent boats and catamarans, but the lake is small, it’s more like a ride for kids – for fun. 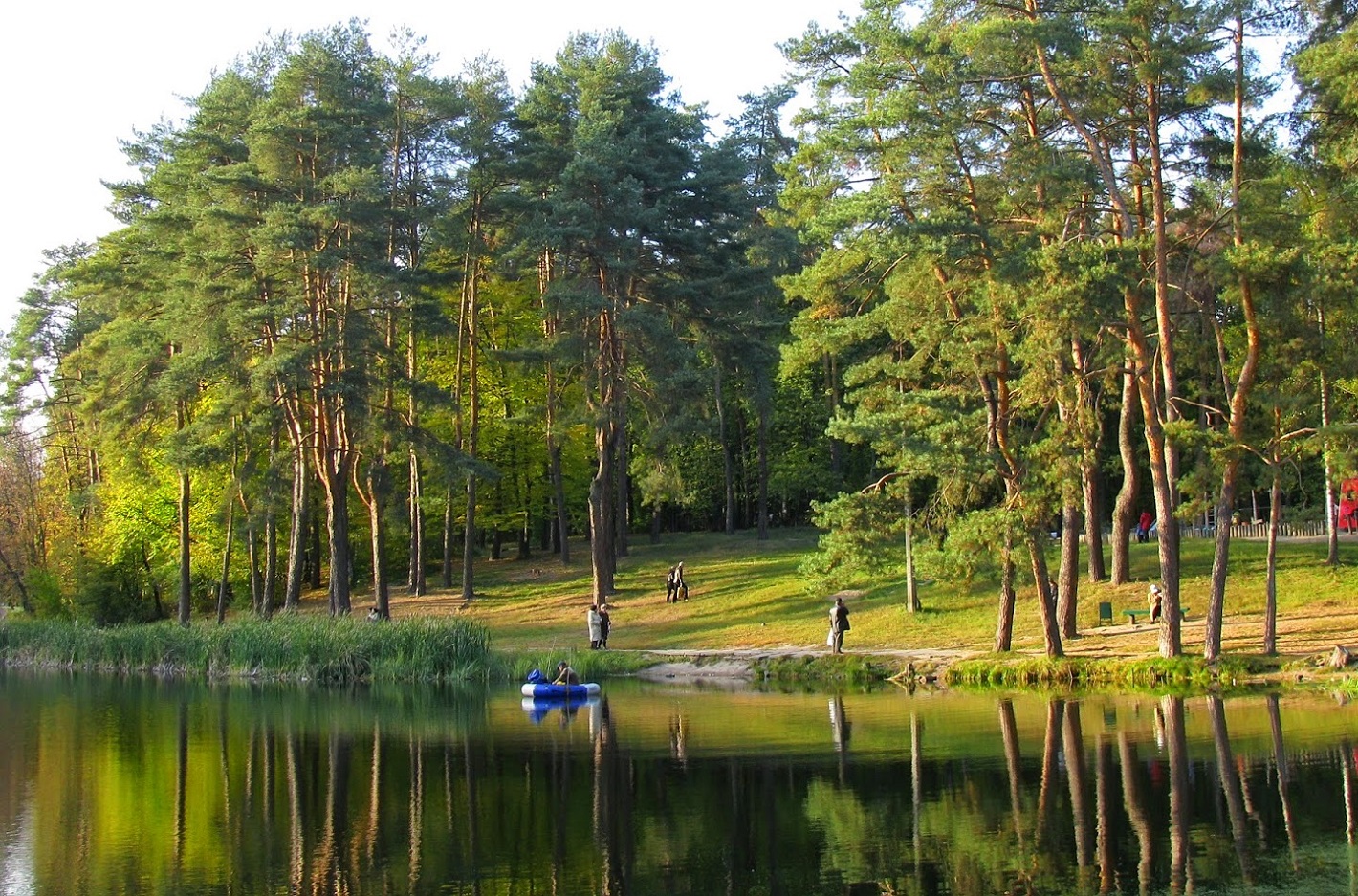 When creating the park, the hills between the Kiev-Pechersk Lavra, the WWII Museum and the Naberezhnye Highway were put in order, paths were paved paths, recreational areas, lawns and flower beds arranged. In the late 1980, in the central part of the park they built the Spivoche Pole with open-air concert hall. Since the beginning of the 1990s, an annual city flower show has been held here; it is visited not only by city residents but also by those who specially come to Kiev to visit the exhibition and show. 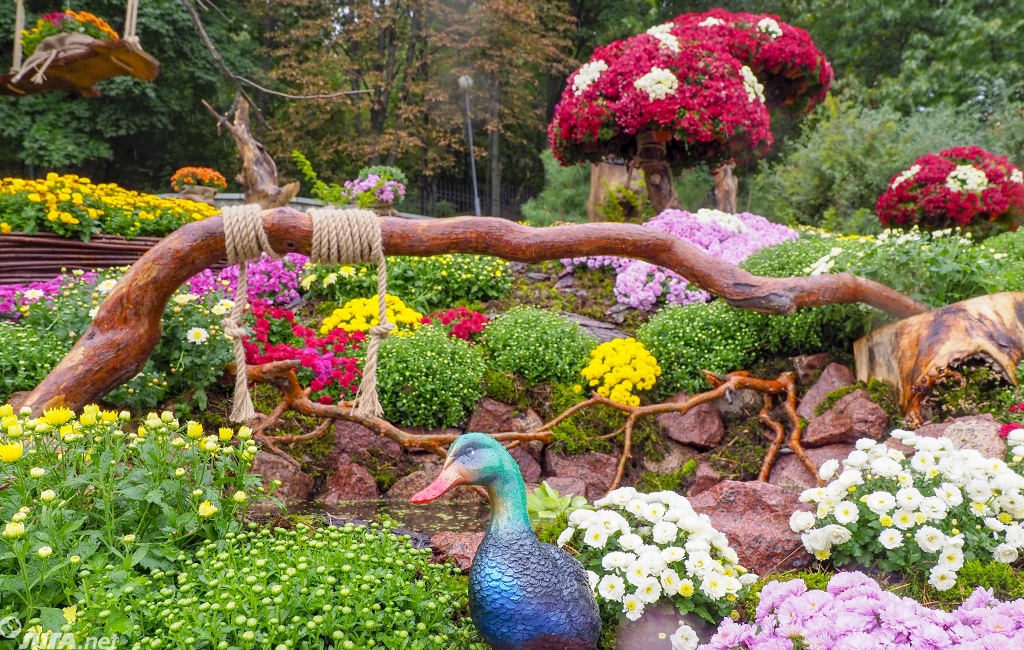 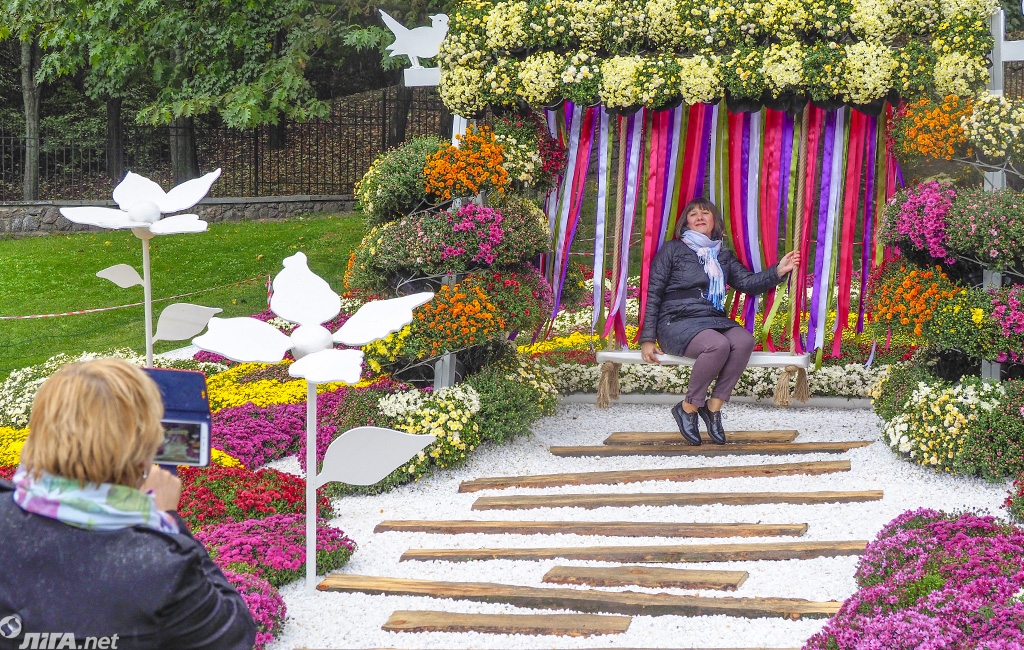 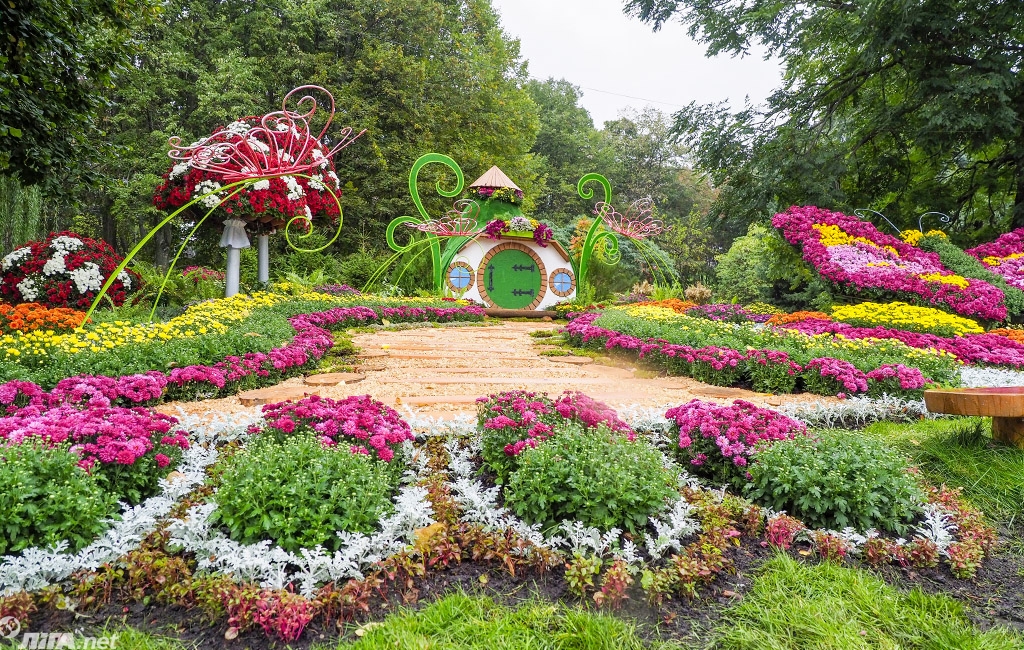 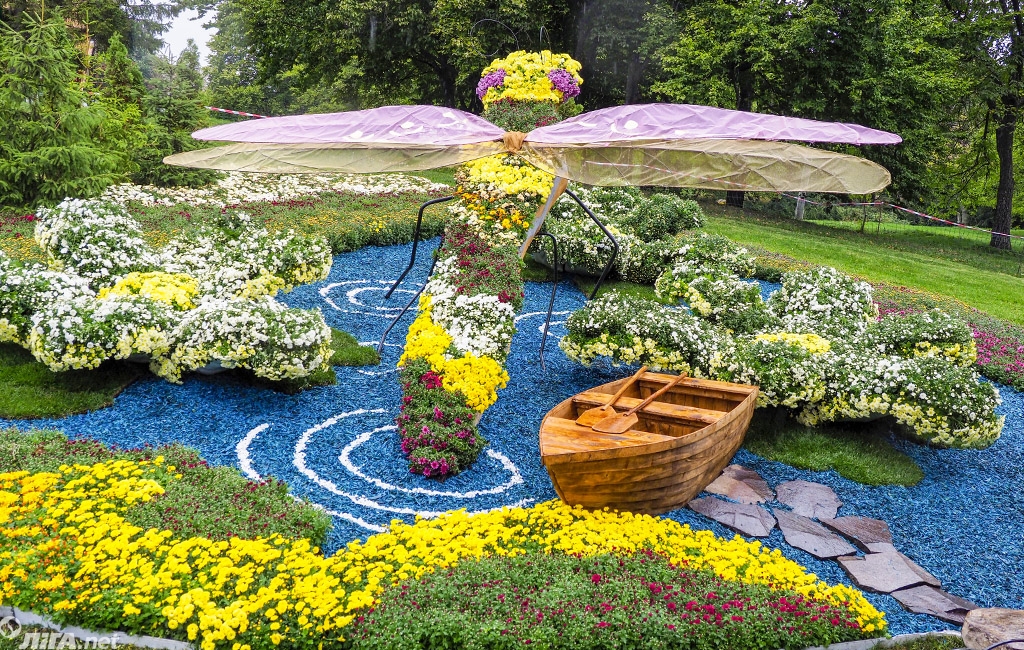 It took a lot of time to create it – almost a quarter of a century. In 1935 the decision of the Kyiv City Council on the construction of a botanical garden was approved, a plot of land with area of ​​117 hectares was allocated for this purpose. Botanical garden still occupies the same area. Every year more than 1 000 000 people visit the botanical garden. The total area of ​​the botanical garden is 117 hectares; the botanical collection includes more than 13,000 plants, trees, etc. On the territory there is the main temple, bell tower and cell buildings of the Ionin Monastery, which was founded by a monk from the nearby Vydubitsky monastery. 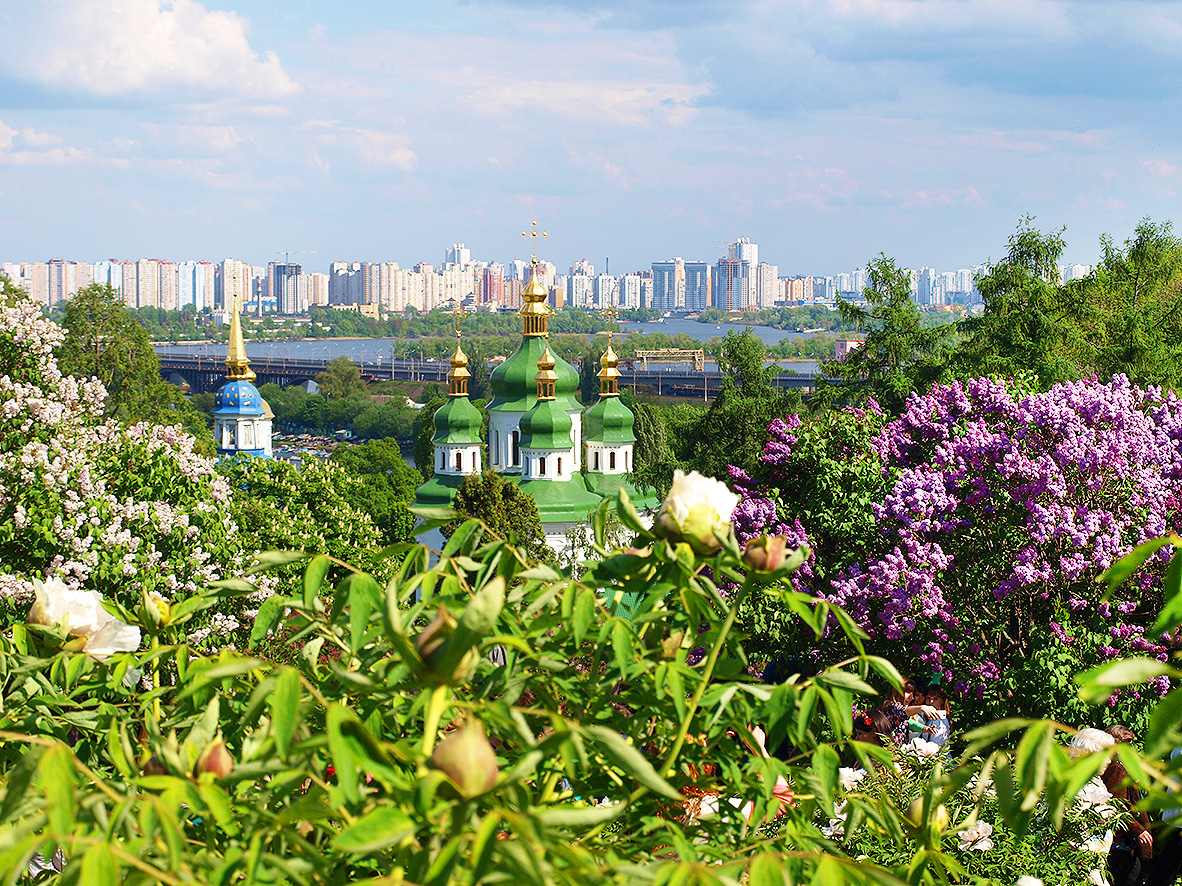 The park was reconstructed in 2017. During the reconstruction, the stairs in the park were completely altered, the observation platforms in the upper part of the park were arranged, also new communications were built, a public toilet with changing table for babies was equipped.

Along the avenue near the bank of the Dnieper, three arbors were set up, playground and field for mini-football were opened.

They have also equipped the area with automatic irrigation with a water intake from the Dnieper to water new trees and flower beds. The central alley was decorated with areas for park sculptures. 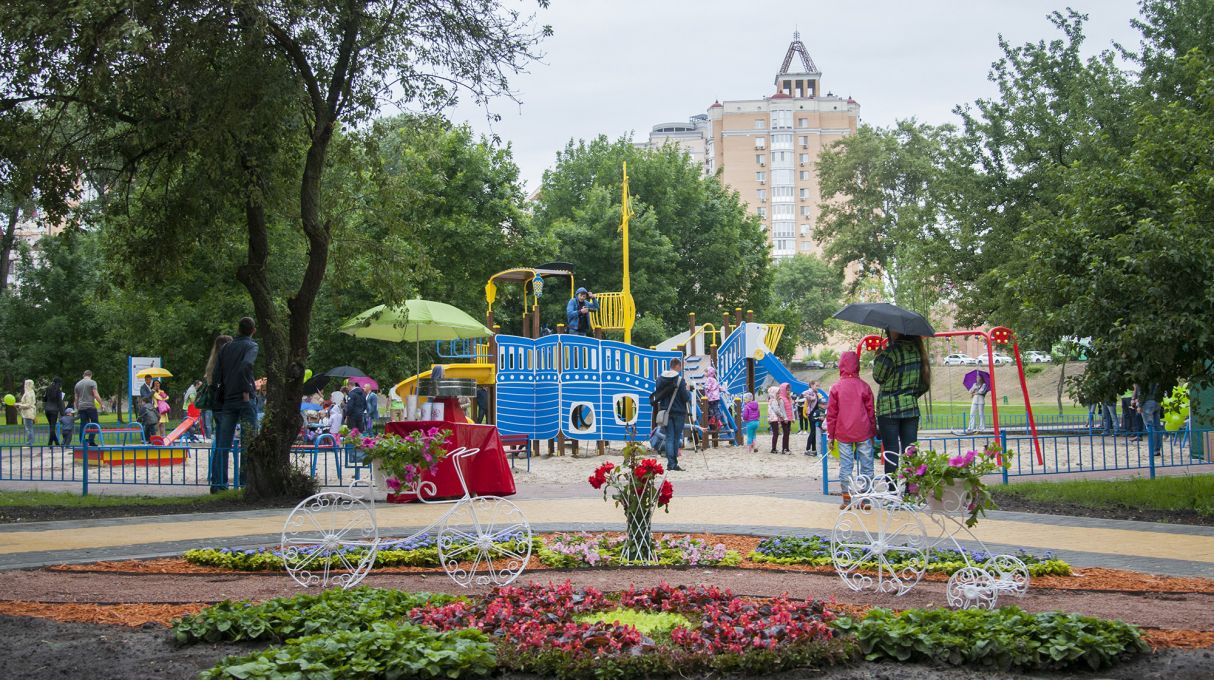 Parks outside the city

Park Feofaniya is a historical place on the outskirts of Kiev. The park employs professional architects in landscape design, so every year this place is getting better and more beautiful.

Previously, the area where Feofaniya is now located was called Lazarevschina, named after a certain monk-beekeeper Lazar. The park is located between Pirogovo, Teremki and Holosievo. Its oldest part passes near Lebedev street and around the church of St. Panteleimon, which was built in 1912.

Since 2003, they reconstruct the area near the ponds, arrange fountains, arbors, make paths and revet the banks.

The park is crowded. Children and parents, couples in love and those having a rest are happy to visit these places. In the park there is a pilgrimage path with the springs, one of them is curative; it is called “Tears of Our Lady”. A little further away one finds another spring; it is a pit with wood-trimmed sides. In summer the temperature of water there does not exceed +8C, and in winter it is never below +4C. There are medical plants growing in Feofania: foalfoot, chamomile, lavender, St. John’s wort. In the park, there is a complex of lakes with catfish and snakes. The park also has alpine gardens and playgrounds. 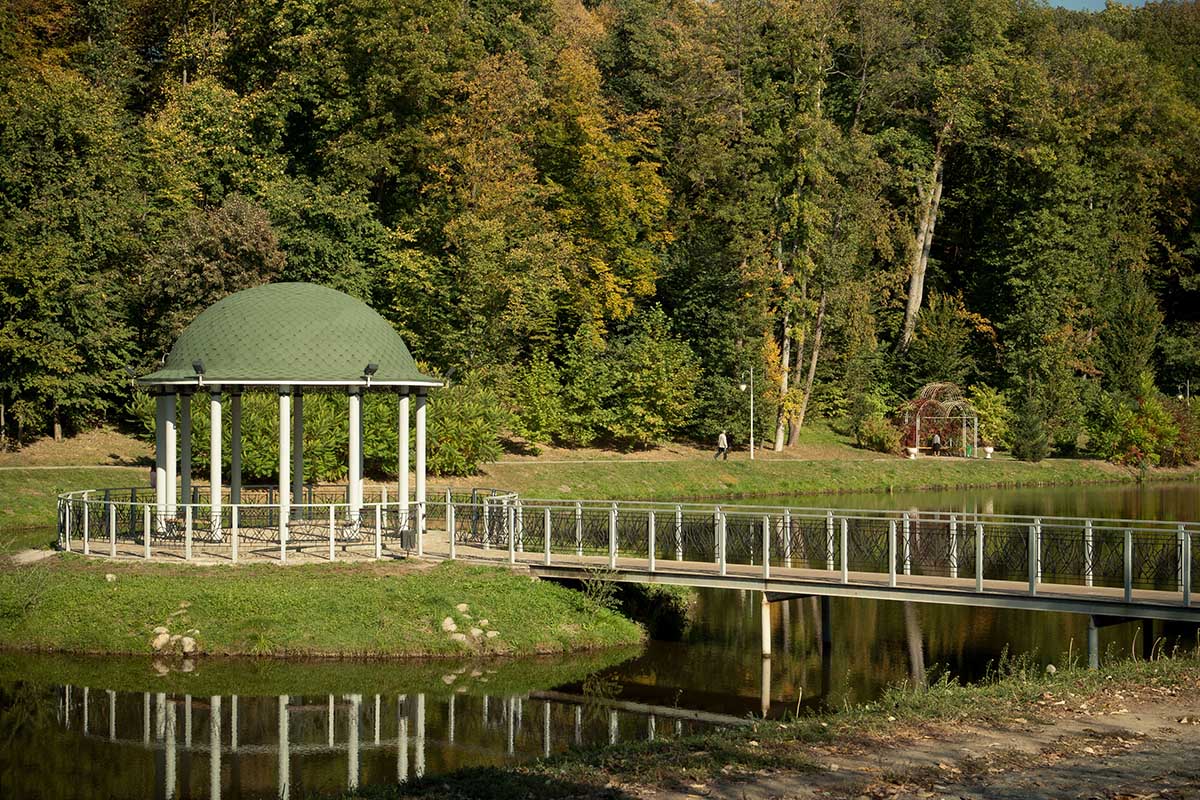 The territory of Mezhyhirya is so huge that it will take the entire day to see it all on foot. Therefore, many hire bicycles and segways. For a long time the territory belonged to the former Ukrainian President Yanukovych, who fled the country in 2014. One of the major attractions of the area is the zoo. If we speak about the number of animals, the zoo in Mezhyhirya of course lags behind the Nikolaevsky and the Kiev Zoo. But if you take into account the general improvement, cleanliness and beauty, the Mezhyhirya Zoo is far ahead of them.

The century-old forest of Mezhyhiria is truly impressive. You can walk there for a very long time, and the area there is very hilly. The park is decorated with many artificial ponds and lakes, where you can feed ducks. Equestrian Club La petite Ecurie offers horse riding and horseback riding. There are shish kebabs and coffee shops on the territory. 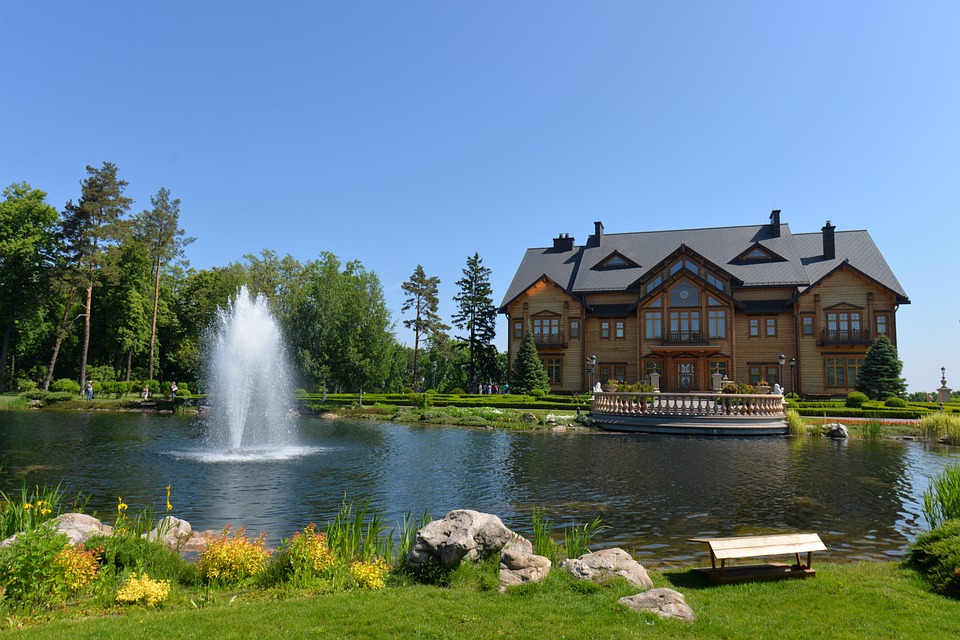 Back in the end of the nineteenth century the notable Kyivans have chosen this area for their rest. In the protected forest, a privileged resort village was established; it was arranged according to the principle of the classical “city-garden”. One could find everything that is necessary for comfortable living and recreation of the people of Kiev. The owners of the dachas in Pushcha-Vodytsya were representatives of the capital beau monde of those years – the creative intelligentsia and successful entrepreneurs; among them – the famous Kiev architects Nikolayev and Bradtman, the manufacturers Snezhko and Richter. Up to the present time, about a dozen pre-revolutionary summer cottages have survived here, as well as one of the little-known works of the architect Gorodetsky.

The settlement gradually turned into a health resort. Apart from the curative climate, this process was facilitated by tram line, which connected it with Kiev in 1904.

Pushcha still attracts visitors with its pine forests, clean lakes, and beautiful nature. The park is beautiful at any time of the year. However, autumn gives it a special charm, painting park alleys and abandoned estates with red and yellow. 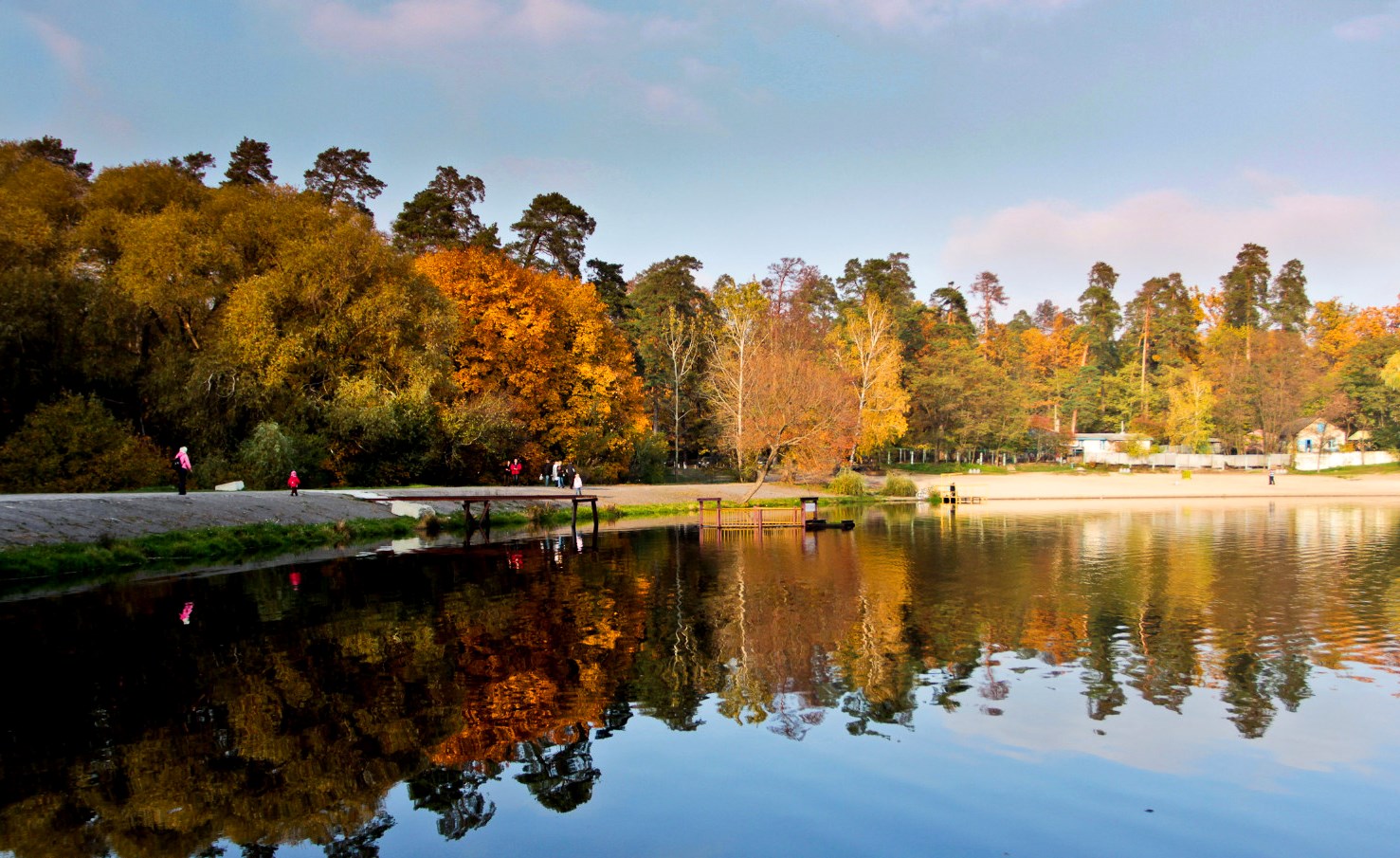 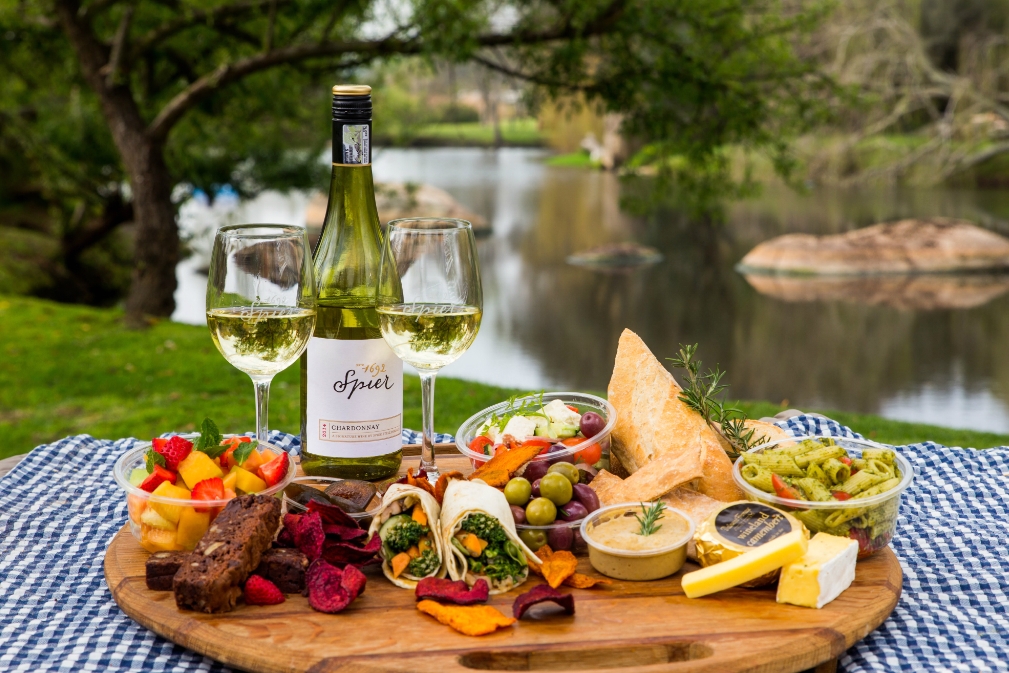 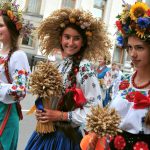 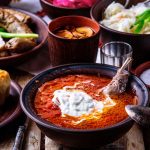