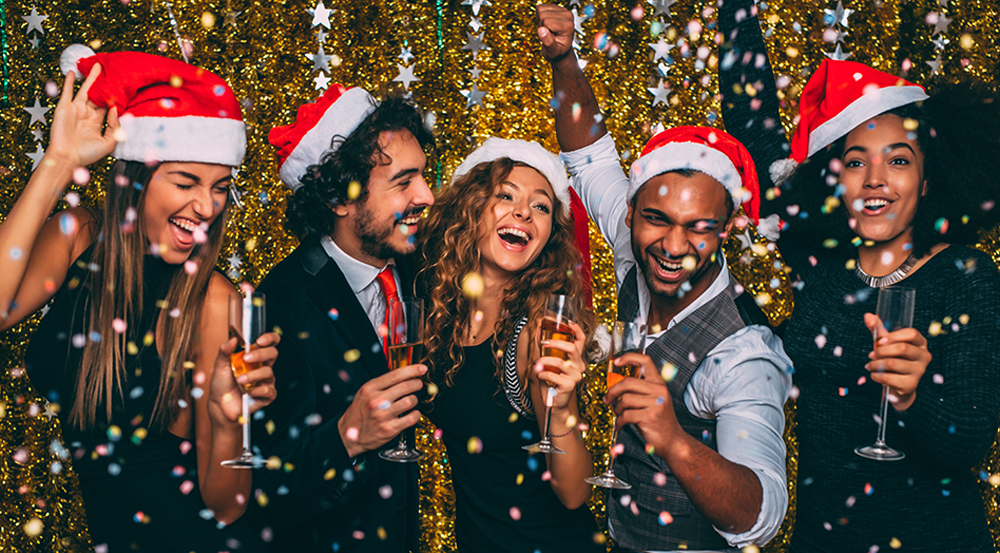 Rest and Entertainment in Kyiv during NEW YEAR and CHRISTMAS 2019

DAYS OFF IN KYIV IN DECEMBER

In total, there will be 11 days off in the last month of this year, and in the first month of the next year there will be 10. Since 2017, Ukraine celebrates Christmas not only on January 7, but also according to the Western rite. On this holiday, Ukrainians will be able to rest for three whole days – December 23, 24 and 25. Saturday, December 22, is working day: all government institutions and banks will work as usual. Since the New Year is on the night from Monday to Tuesday, you can relax on December 30, 31 and January 1. Saturday, December 29th is a working day – for the day off on December 31st. 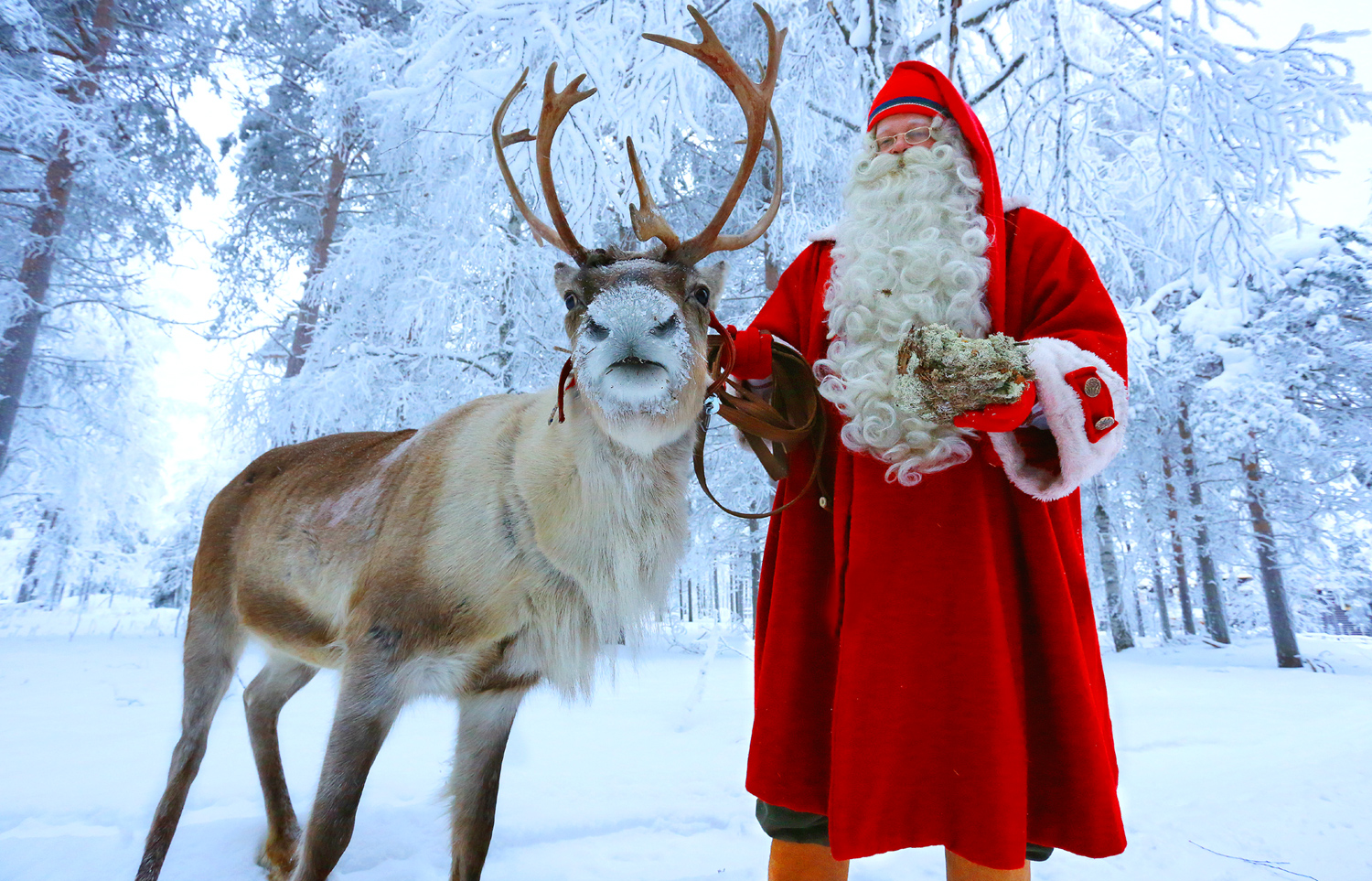 Cognitive leisure can be organized on days when museums and galleries do not require admission fees. It is never too late to study, it is also very interesting.

Going to a museum or gallery is a great way to add knowledge.

NEW YEAR AND CHRISTMAS IN KYIV 2019

Until 31 December, the residence of St. Nicholas will work in the Kiev-Pechersk Lavra. You can get into the world of fairy tales by entering the Great Bell Tower. Near the entrance, little visitors are greeted by flickering angels from garlands and a luminous team with deer. In the building of the bell tower on the first floor, you can write a letter to St. Nicholas and make a wish under the magic arch. 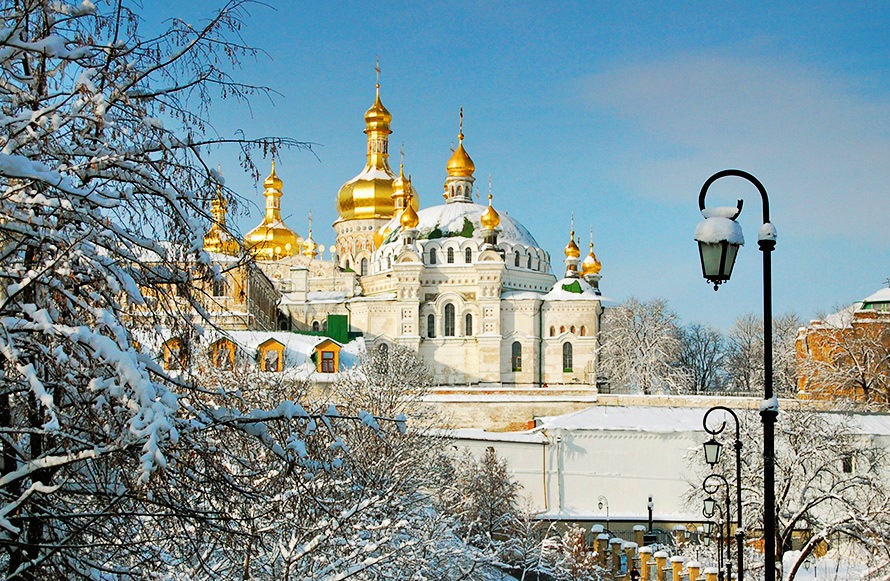 Having passed the spiral staircase, we go in a more spacious hall, where the saint will receive his little guests. In the center of the room near the Christmas tree there is a huge armchair, where Nicholas will listen to the kids, play and chat with them. Also hand-made figurines of angels and fairy-tale characters are placed around the hall. This is the exhibition of author dolls “Angels, those … that are always there.” In the same room you will find the exhibits of the “Museum on the Wings” from the city of Kreminne of the Luhansk region and the scenery of the film “Only a Miracle”, staged by filmmakers in the residence.

WHEN WE BEGIN TO CELEBRATE 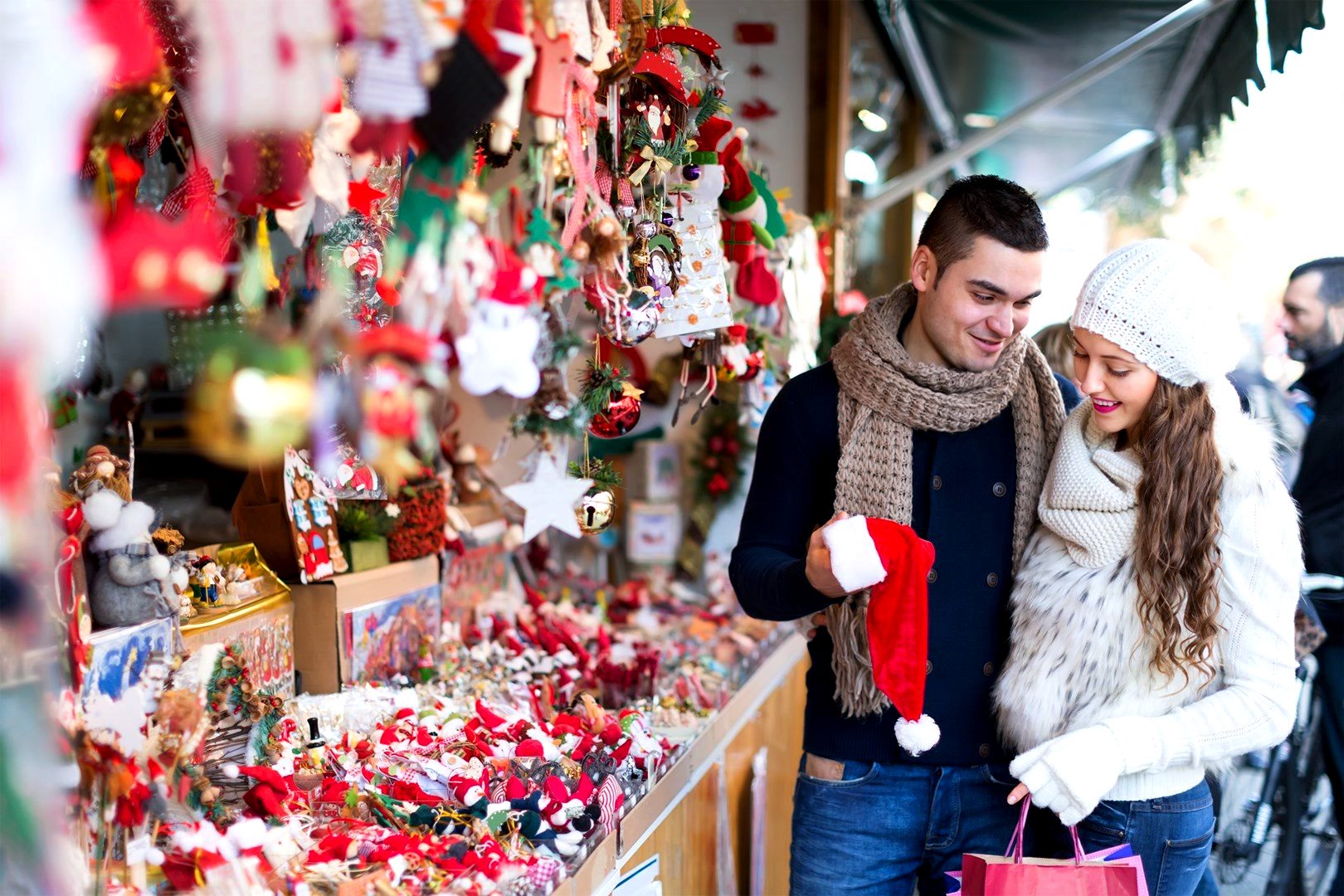 The height of the main Christmas tree of the country, which will be placed on the Sophia Square, will be 25 meters. It will be decorated by 1000 toys. In addition, the tree will become interactive, as in addition to the dynamic light structures around it there will be a special screen. The square will be decorated with 3 kilometers of bright garlands, and a train of desires will run near the monument to Bogdan Khmelnitsky. 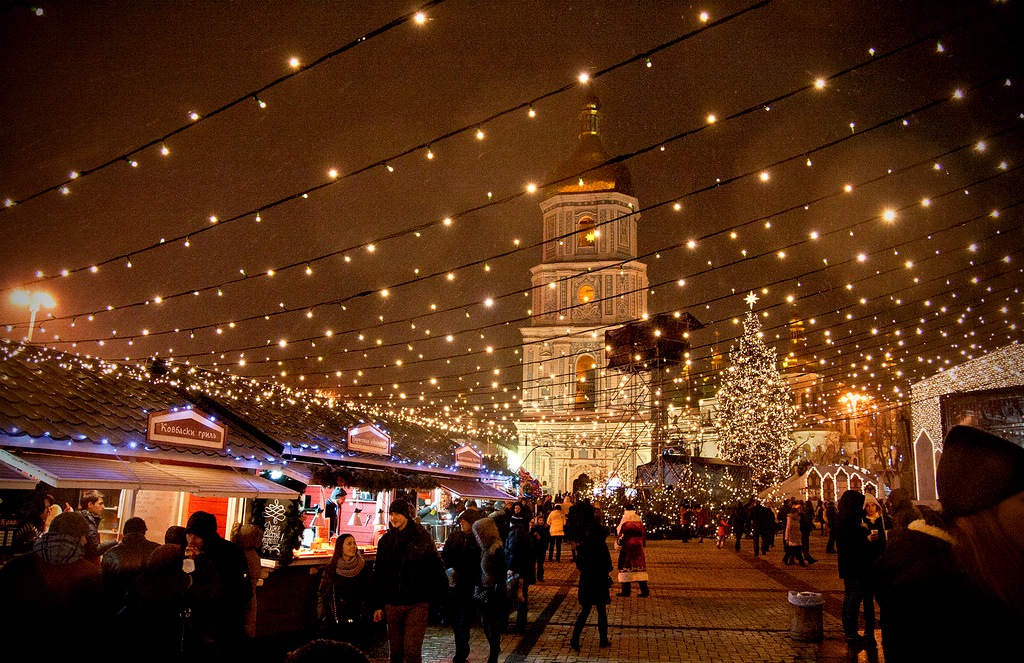 Also there will be a closed 12×6 meters concert stage on the square; the air will warm up to +20 degrees on that stage. Here 15 concerts will be held for residents and guests of the city. Also 16 houses where you can buy Christmas souvenirs will be installed on the square; 35 food courts, 23 of which will be located on Vladimirsky passage will be waiting for guests. The passage itself will be decorated with light installations in the form of large snowflakes that will illuminate the road and create a festive mood.

Get ready for a Christmas tree with a height of 22 meters on the Kontraktova Square! The tree will be decorated with about 250 toys, made in the style of works by the famous Ukrainian artist Maria Primachenko. Also fantastic animals from Primachenko’s paintings will appear on bright photo zones decorated with garlands. In addition, make sure to see festive installations on Petro Sagaydachny Street and in the park near the monument to the Ukrainian hetman. The residence of St. Nicholas will be located in the park area. 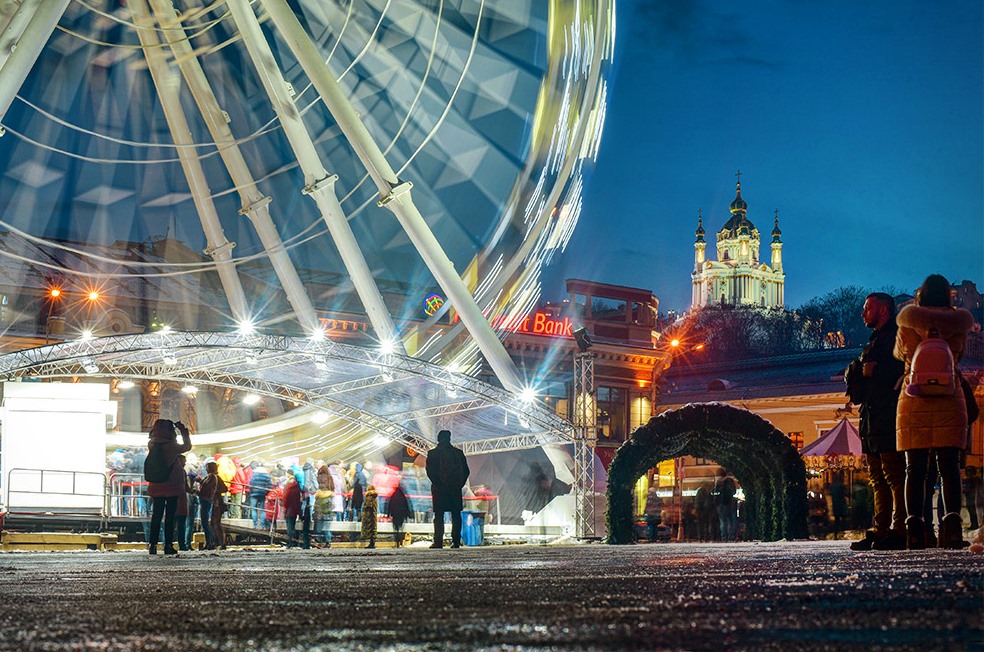 Artists and musicians will perform on a closed 12×8 meters stage; it will warm up to +20 degrees. Here, viewers will be able to watch 19 concerts. In addition, 13 huts and 9 food courts will be placed on Kontraktova Square.

New Year in Kiev will not get boring

PRICE FOR ATTRACTIONS AND INTERNET

Free wi-fi will be available on the territory of the holiday locations. The price of attractions will start from 50 UAH, but the organizers will provide children of disadvantaged groups with free tickets.

On December 24, on Christmas Eve of the Catholic Christmas the Sophia Square hosts a large-scale concert with performances of various musicians, as well as locations with creative and educational events.

TRANSPORT IN THE NEW YEAR NIGHT

On December 31, 2018 – from 8pm to 3am on January 1, 2019, traffic will be blocked along Vladimirsky Passage and Vladimirska Street (starting from house No. 23 on Sophievska Street to Rylsky Lane). It is also known that on New Year’s Eve city traffic will be extended by 3 hours, and the funicular will work around the clock.

This year, same as during the previous New Year holidays, the use of pyrotechnics and fireworks are banned. Organizers of all events, as well as residents of Kiev must adhere to this rule.

BUYING CHRISTMAS TREE IN KYIV: WHERE AND HOW MUCH

In Kiev, the sale of holiday trees has already begun, namely, ordinary and blue spruces, pines and sets of spruce twigs. Ordinary spruce or pine (up to 1 meter high) costs 78UAH. For a 1-2 meter high New Year tree one has to pay177UAH, and if you want a tree 4-5 meters tall or even higher, het ready to pay 1500UAH. Blue spruce is twice as expensive. For example, up to 0.7 meters such a tree costs about 200UAH, for 1meter high you’ll have to pay 360 UAH, and trees two meters and more cost from 1248UAH. If you just want to buy a spruce bouquet, it costs 45UAH for 7-9 twigs. 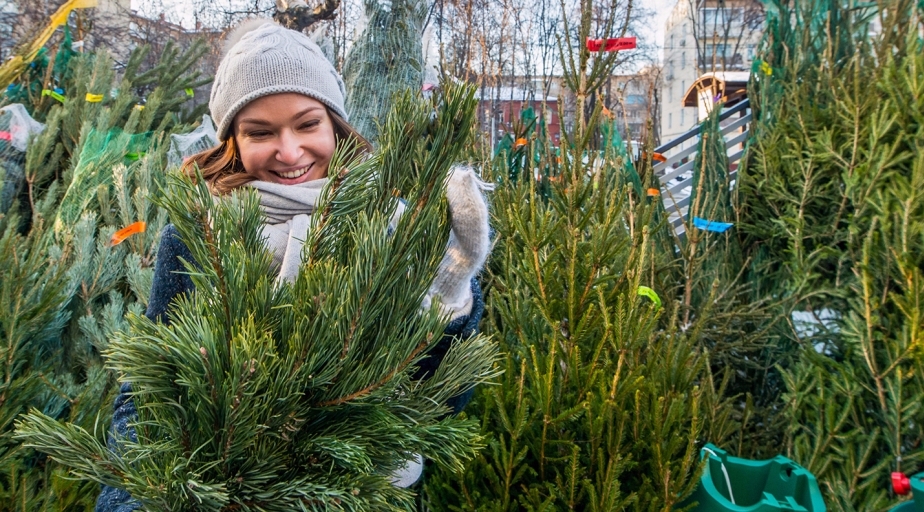 WHAT HAPPENS IF I CUT DOWN THE NEW YEAR TREE

Depending on the situation, violators are provided with different fines. According to the decree of the Cabinet of Ministers of Ukraine, the amount of damage caused to greenery within cities and other localities, the cost of compensation depends on the diameter of the tree at root collar:

If you are going to visit Kyiv on Christmas, take a local to show you all the secret and well known sights.

What is fun to do in winter in Kyiv? 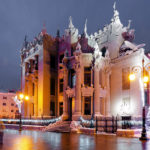 5 Most Popular Destinations in Eastern Europe 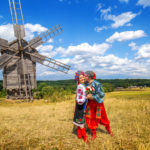