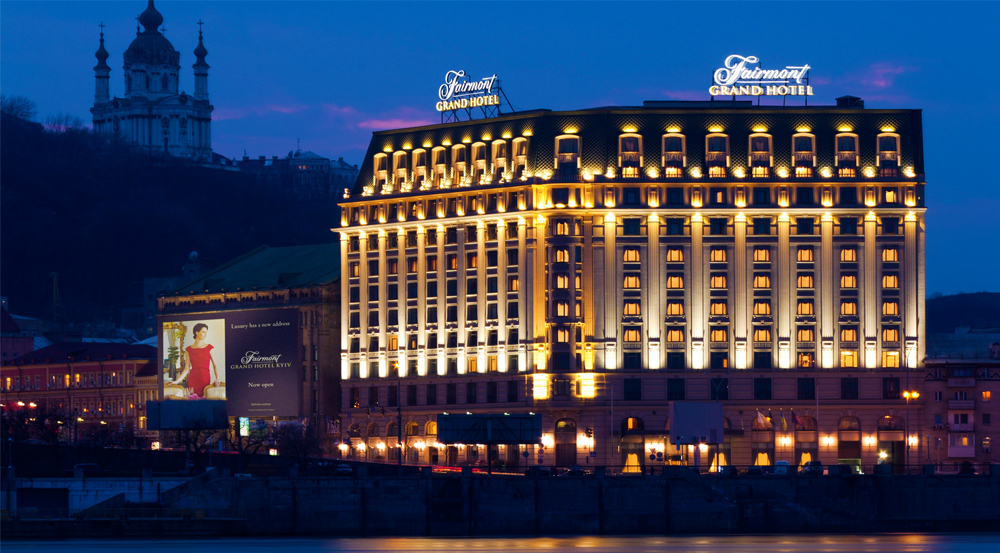 One Day in Kiev: What to Do – Travel Guide

If you have never been to the capital of Ukraine before, and only you have One Day in Kyiv and you are trying to think of what to do, we offer 3 perfect options that make it possible for you to see the most famous places of Kiev center: Vladimir’s Cathedral, Golden Gate, Khreshchatyk, Independence Square, Sofia Square, Andreevsky Descent, Mikhailovsky Cathedral. And most important, you will spend time with pleasure and will learn a lot of new things.

What to Do in Kyiv?

The travel agency in Ukraine Guide me UA offers 3 Sightseeing Tours – so-called express excursions where you will get to know about the history of Ukraine from A to Z and will see the main attractions.

The Old Town is the so-called center of Kyiv that has many ancient and modern buildings, as well as Soviet architecture and modern constractions.

The excursion includes: pick up from the hotel and guide services for three hours in English, German and French.

Golden Gate is one of the few monuments of the defensive architecture of the Old Russian state constructed during the reign of Prince Yaroslav the Wise. With Yaroslav the Wise, the territory of Kiev actively expanded, which required the construction of new defensive fortifications – powerful shafts with reinforced wooden cedars and deep grooves. The city of Yaroslav the Wise was surrounded by earthen shafts totaling 3.5 kilometers, passing through the current streets of the center of Kiev – from Lviv Square along the Yaroslaviv Val street to the Golden Gate, to the Independence Square (where Lyadsky Gates were located) and again up to Mikhailovska Square. 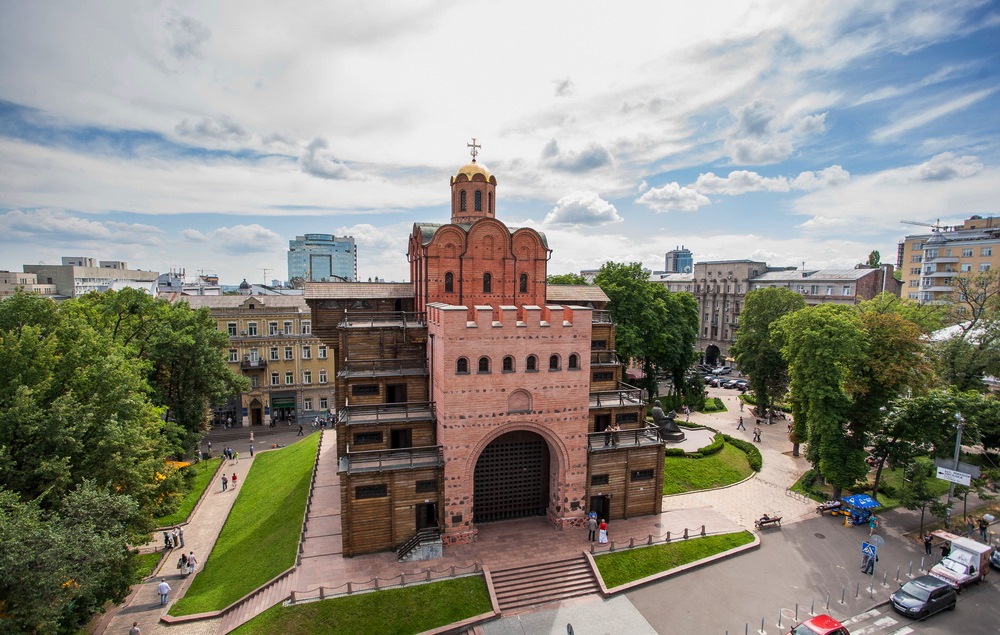 According to the chronicles, it was Prince Yaroslav the Wise who has built the Cathedral of St. Sophia; it is a temple built in the first half of the 11th century in the center of Kiev. At the turn of the XVII-XVIII centuries it was externally rebuilt in the style of the Ukrainian Baroque. Inside the cathedral one will find the most complete ensemble of authentic mosaics and frescoes of the first half of the 11th century in the world and significant fragments of the wall of the seventeenth and eighteenth centuries. St. Sophia Cathedral became the first t architectural monument in the territory of Ukraine to become UNESCO World Heritage Site.

Andreevsky Descent in Kiev is one of the ancient roads connecting the Upper City, its central part, with the trading Podil. Andreevsky Descent has got its modern name because of the St.Andrew’s Church built there in the middle of the XVIII century. Andreevsky Descent is a paradise for tourists; here there are many souvenirs sellers, street artists, museums, theaters and truly a magical atmosphere.

This excursion includes the above-mentioned sights of the first tour; however after 3 hours of walking we will allocate the time for your lunch at the best Ukrainian cuisine restaurant where you will be able to hear about the history and traditions of Ukrainian cuisine. (Lunch is not included in price)

The excursion includes: pick up from the hotel, guide services for six hours in English, German and French.

Podil is one of the oldest neighborhoods of Kiev, and the birthplace of the city’s trade, commerce and industry. After the Mongol invasion of Rus’ and destruction of Kiev, it served as a city center until the 19th century.

Here was located the city administration (magistrate), main university and later here was established the city’s port and shipyard. 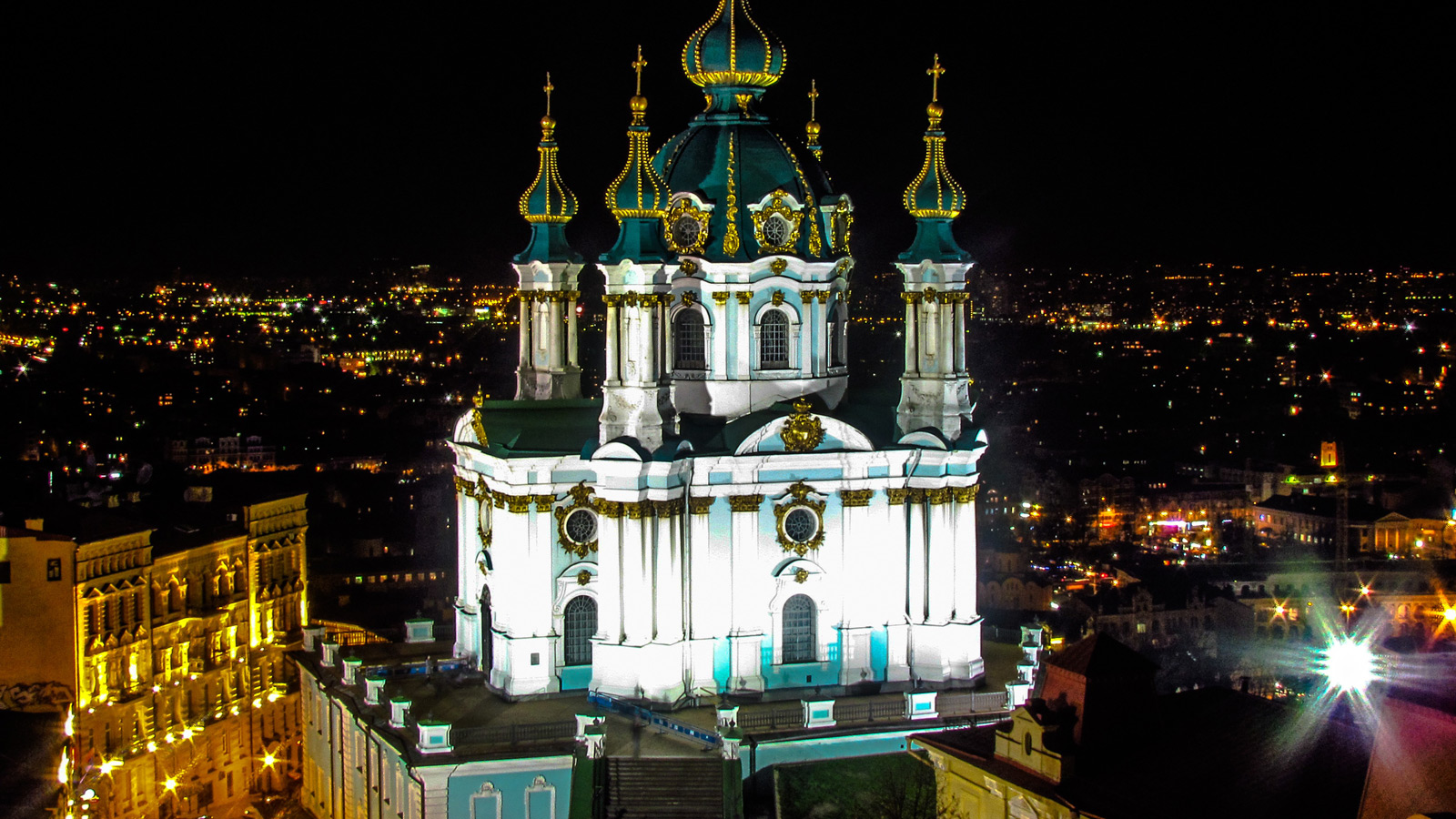 Podil contains many architectural and historical landmarks, and new archaeological sites are still being revealed. It is a part of the city’s larger administrative Podilskyi District.

This is a great option for those with limited time, but willing to see absolutely all sights of Kiev and preferring a comfortable trip by car or minibus, depending on the number of people.

The excursion includes pick up from the hotel, guide services for three hours in English, German and French, transport, private driver services.

As we move by car, we can see more sights of Kiev; therefore, in addition to all of the above this tour also includes visiting the incredibly beautiful Vladimirsky Cathedral and the Museum of the Great Patriotic War and the Motherland Monument.

The Motherland Monument is one of the highest in the world: along with its pedestal (the museum is actually located inside it) its height is 102 m (62 m without a pedestal). One can also enjoy the view of the city from this height. 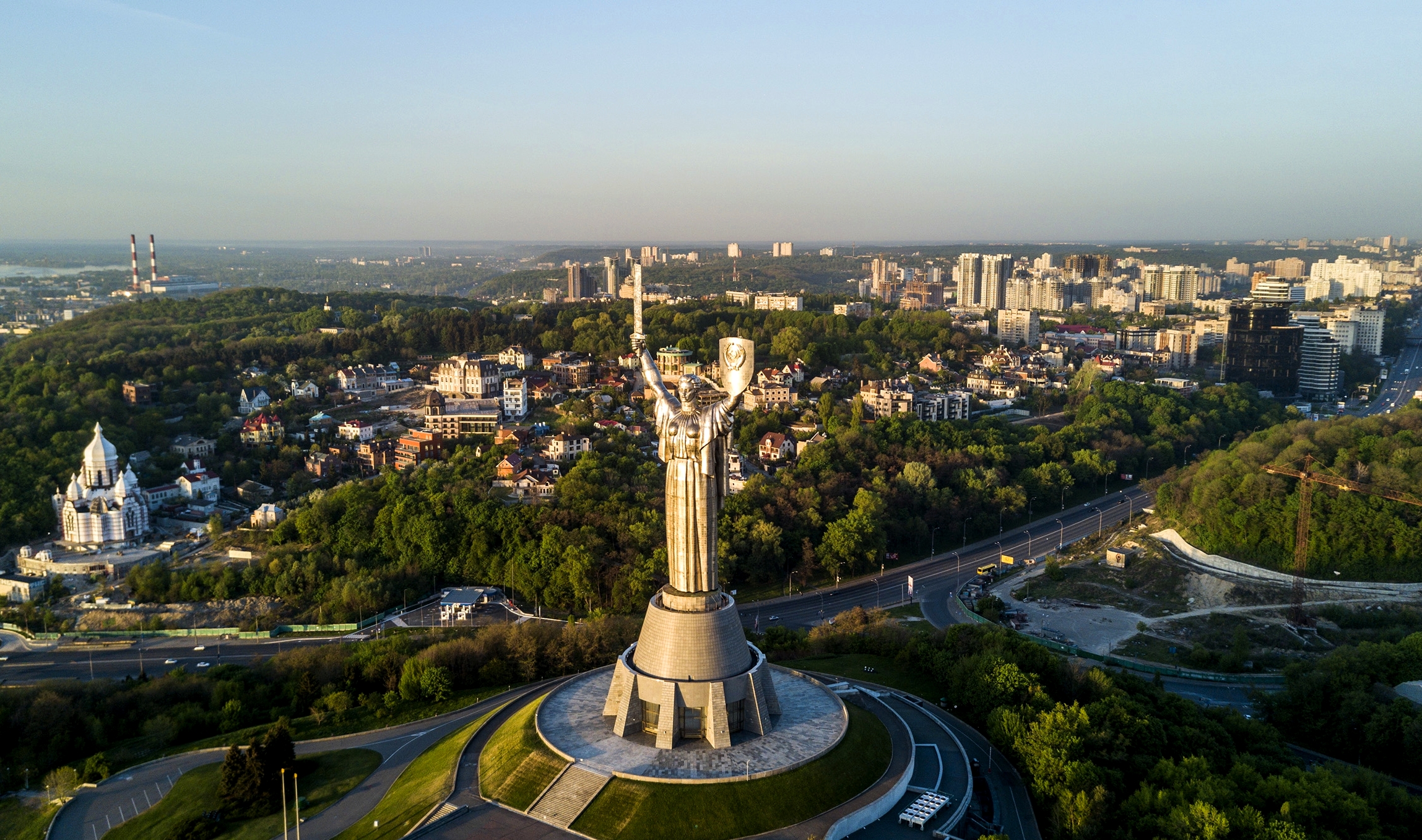 Initially it was planned that the height of the sculpture would be 80 m; however, the Kiev Metropolitan opposed this decision, since in such a scenario the Motherland Monument could be higher than the bell-tower of the Kiev-Pechersk Lavra. “We should not allow weapons to be above the cross,” he said, and the first secretary of the Central Committee of the Communist Party, Vladimir Shcherbytsky considered it fair. Especially since such a decision was approved by architects: observance of the equilibrium in heights was necessary for the general architectural appearance of the city.

There are 2 viewing platforms on the statue, where excursions are regularly organized. One is at the “feet” of the Motherland Monument at a height of 36 m, and the second is located on a sword, at an altitude of 91m. It offers unbelievable view of Kiev.

And another highlight is Kiev-Pechersk Lavra caves. On the slope of the Dnieper there are beautiful temples, majestic buildings, beautiful gardens and paths paved with ancient stone. But the very heart of the monastery lies… underground. 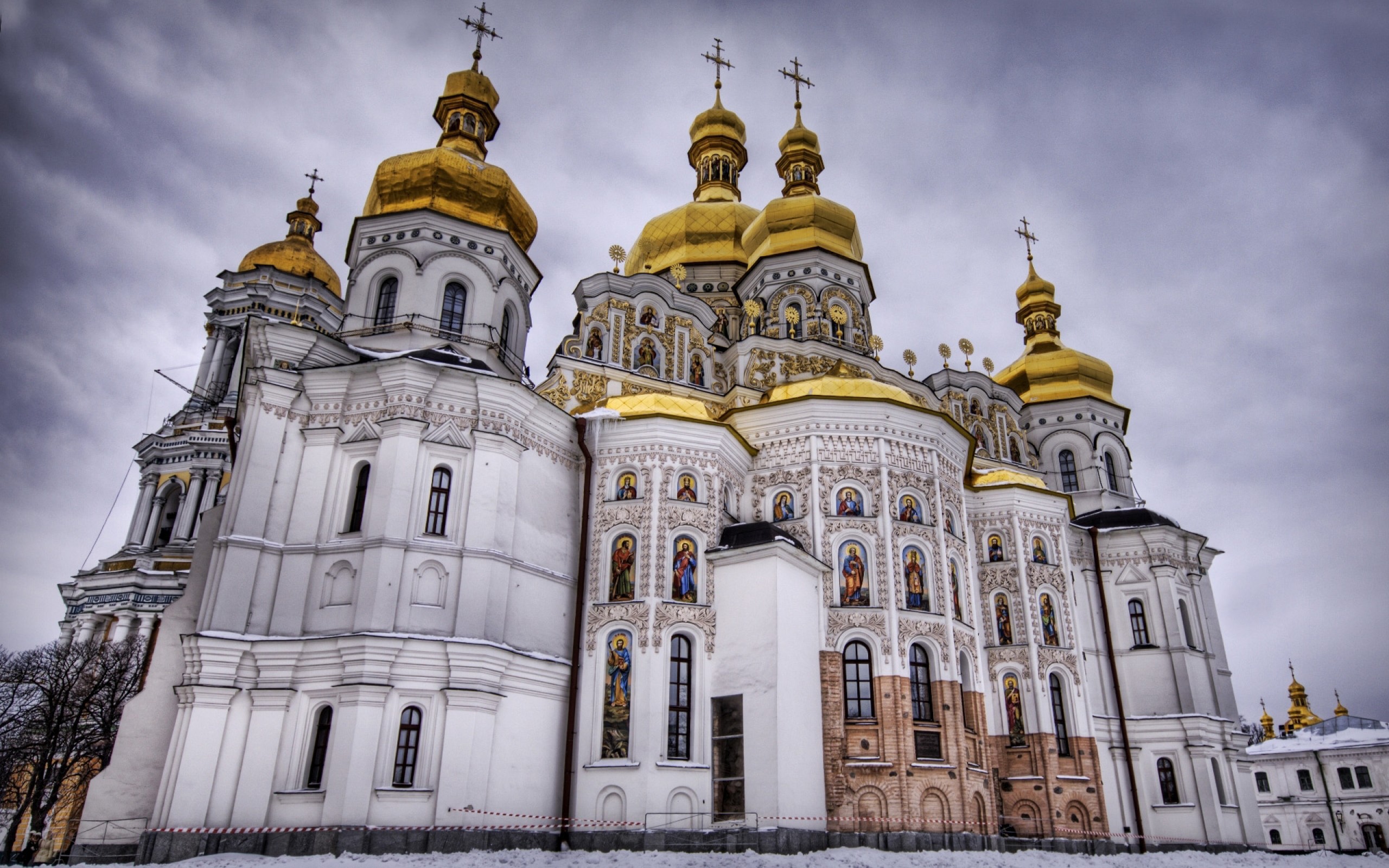 After all, it is by no means called it Pechersk, which is translated from Ukrainian as made in cave. At the bottom, under the high Dnieper hills, you will find a maze of narrow (not enough for two people) corridors. Anyone can come in here. It is worth taking a candle with you, because it is very dark there, and sometimes it is even absolutely dark. Here, 120 saints – monks, doctors, saints who lived on the territory of the monastery – are resting.

All 3 excursions are designed to cover all the important sights of Kiev at one time in case your stay in Kiev is limited or you have only one day to get acquainted with the city.

However, if you are ready to explore the city for several days, we invite you to get to know about other tours we offer: 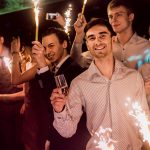 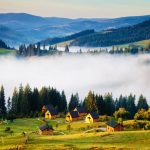 Carpathian Mountains in Ukraine. When is it better to come: in summer or in winter?