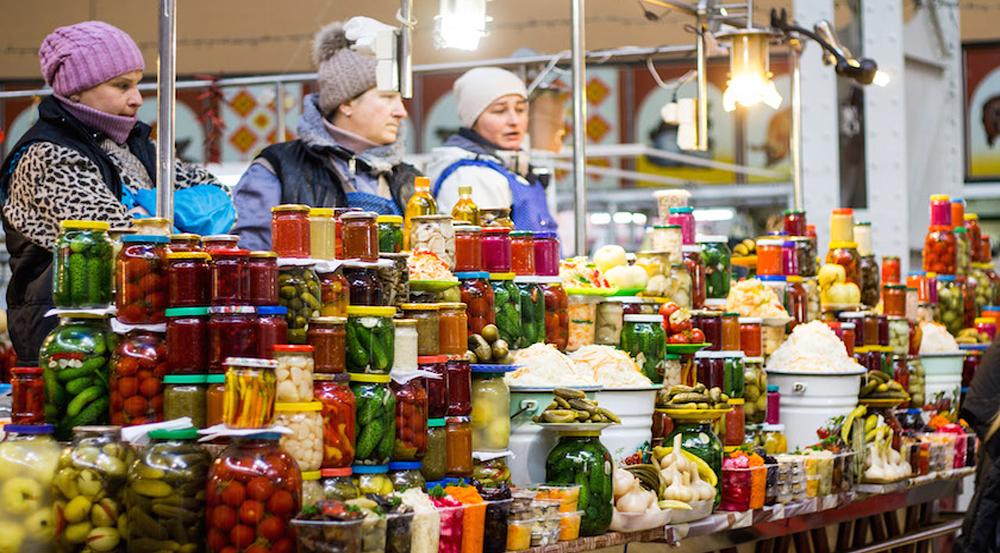 Here are some non-tourist places for Kiev guided tours which you will enjoy. It’s a city market, a railway station, a secret courtyard and one of the oldest institutes in Kiev.

Not all Kyivites, not to mention guests of the city, know that there is a mini zoo on Reitarska Street (Zoloti Vorota metro station). To find it, go into the yard of the house 9-b, where there are 2 cages with ravens. Near these cells you can often meet other people, who just like you came to look at the birds.

At the moment there are two ravens – Cyril and Corbin. Originally there were three of them but Karlusha died in 2016. 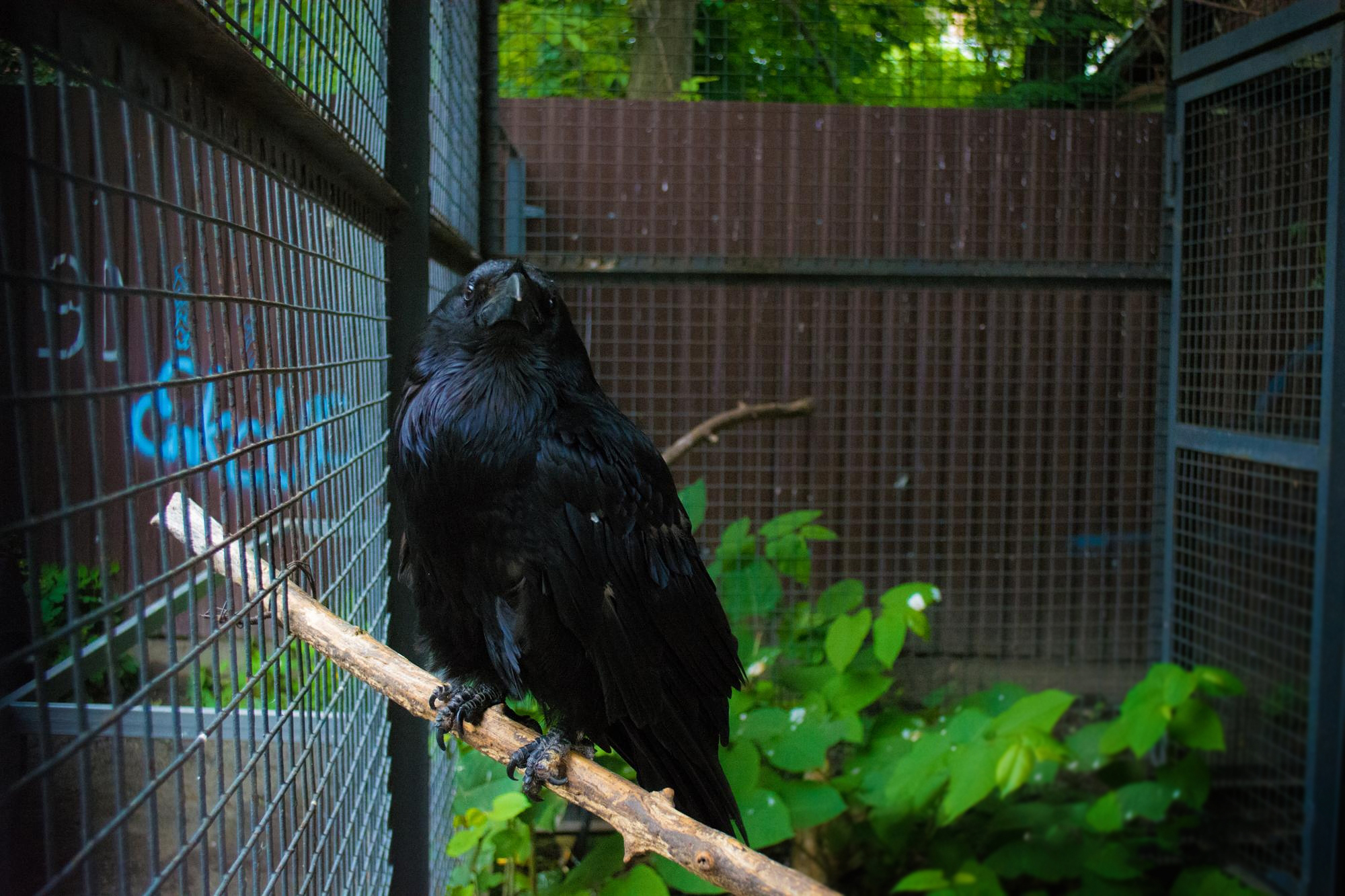 The life of each bird was initially tragic. Corbin and Karluha were brought by hunters who have found them wounded in the forest. Corbin was the first to settle there. The owner of the birds says that then there were not even an idea to arrange the cage for the bird; Corbin lived on a tree tied to it by a 50-meter rope. When the chick took off to wiggle its wings, all the pigeons flew away. It was decided to build the cage when a second chick Karluha appeared a year later (it was brought by the Kievans, they said that it fell out of the nest). A few years later, Cyril also “moved in”. He was brought from the zoo and he was dying. Having cured young ravens, the owner decided not to let them out; he was afraid that the birds will not survive in the wild.

Some facts about the birds: 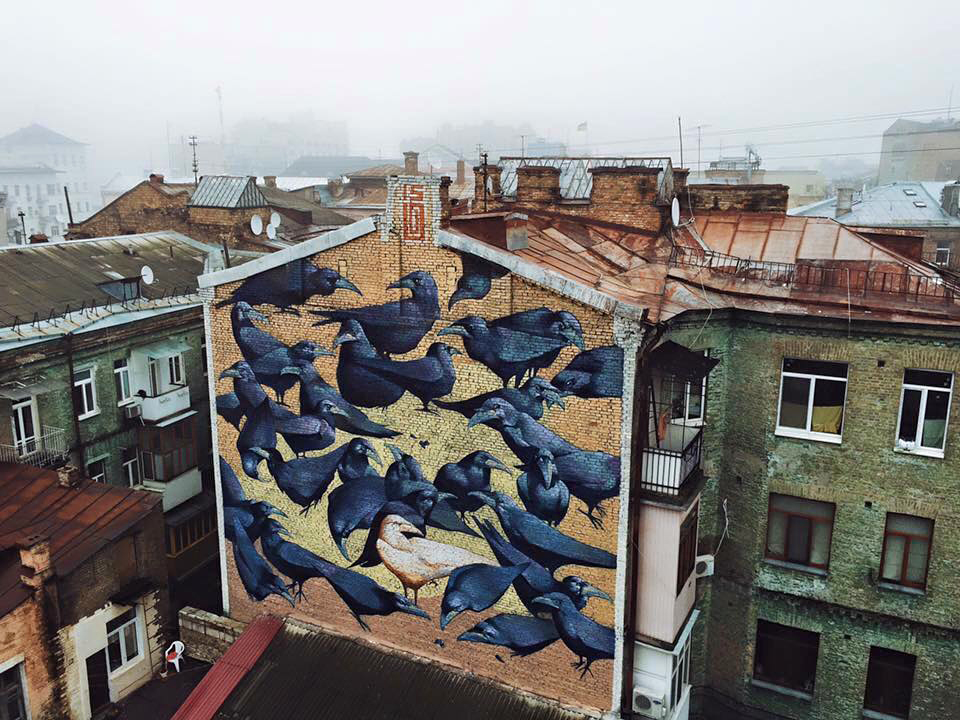 Mural at the yard with ravens

This attraction in Kiev you may see during the General Sightseeing Tour by Guide me UA.

Kiev-Passenger became the first large railway station in the USSR. It was built on the site of a two-story building that was constructed in 1868. 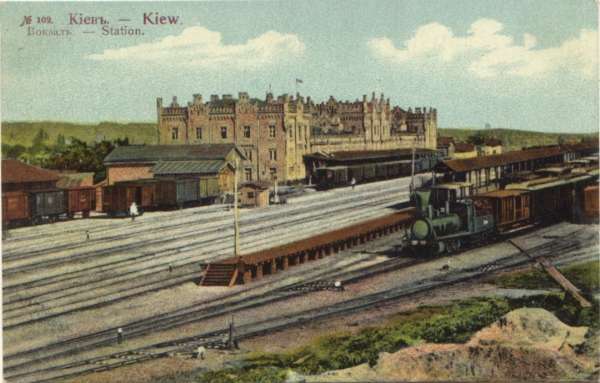 The first train from Kursk arrived to the station on February 18, 1870. Before this, train from the northern cities of the Russian Empire reached only Dnieper.

In 1877, the building suffered from a fire. In 1908, the old station in Kiev was dismantled and a temporary wooden barrack was built in its place. The construction of a new building in the style of Ukrainian baroque with elements of constructivism was completed on February 23, 1932; at that time, the cost of its construction was unbelievable – 13 million Soviet rubles.

During the Second World War, the station building was severely damaged. 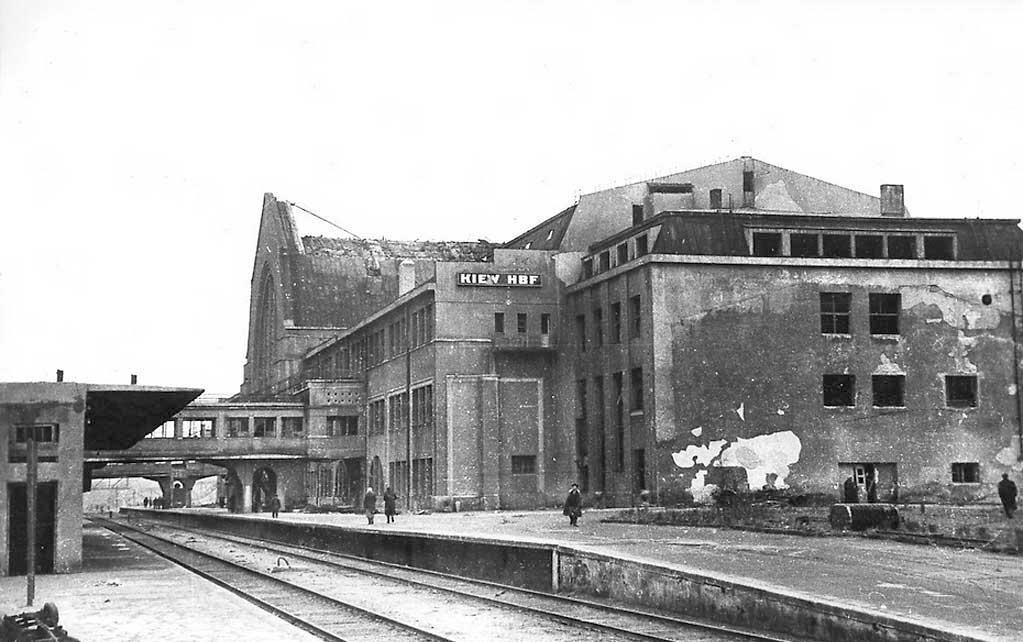 In the early 1950s, the interior of the station was reconstructed upon the project of architect Domashenko: the arches were replaced by twin columns, the ceiling was decorated with stars, industrial and idyllic landscapes were painted in the waiting rooms between the crossbars of the concrete frames; dome lamps were replaced with heavy theatrical chandeliers.

Before the Olympics-80, another cosmetic repair took place. In 1996-1997, a major overhaul of the station with a partial re-planning and modernization of premises was carried out, and the stucco coat of arms of Ukraine was installed on the central façade of the building.

In 2001 the station was reconstructed, the Southern Railway Station was built. 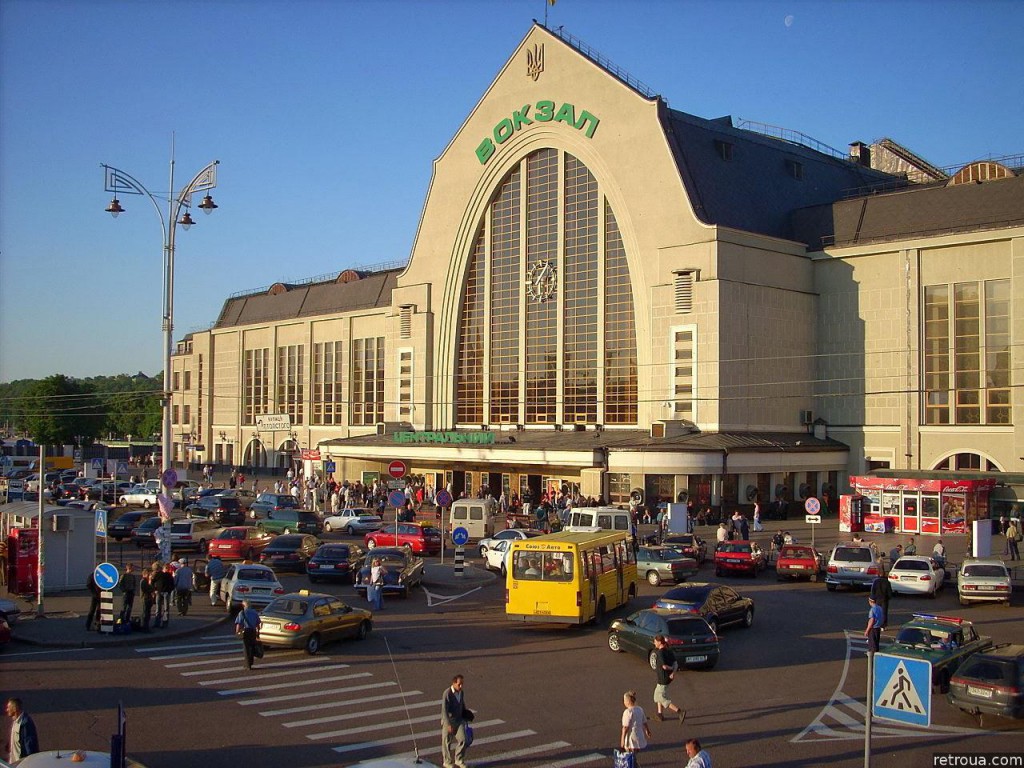 If you ask Kievans about their associations with the railway station, their answer would be it’s a terrible smell, lots of homeless and beggars, and also – Kiev cake and the most visited McDonald’s in the world located next to the station.

It is unlikely that one can ever find a place that is of greater importance for the indigenous people of Kiev, rather than the Bessarabsky market. Today it is a gastronomic center that successfully combines cultural and architectural, historical and culinary values. Businessmen and politicians buy food here; young people are hanging out; this is a place where city legends and progressive trends are born. It is all the more surprising that the commercial significance of this place has not such a long although filled with events and confluences of different circumstances history.

Every Kiev schoolboy knows that until the end of the 18th century Khreshchatyk, today’s main street of the capital, remained a place for cattle pasture and actually was out of the city line. However, in 1797 the Contract Fair was moved from the city of Dubno to Khreshchatyk; it became the most important source of income of the city treasury and provided the ancient city with an opportunity for a new development. Andrey Melensky, the then architect of Kiev, quickly realized that Khreshchatyk can have enormous significance for the city.

Bessarabka, which then was the south-western outskirts of the city, initially had a rather vicious reputation. One of the versions of the origin of the name of the area, according to the historian of the 19th century Peter Lebedintsev, says that in the 30s of the last century the Kiev chavs was called “bassaraby”, and since it was this area that a large number of representatives of this social group came to, people of Kiev began to call the place Bessarabka. However, this theory contradicts the other theory which states that in the place of Bessarabka, where the bargaining settled since the 70s, which we speak about below, there were many sellers of goods from the then south of the Russian Empire. It should be noted that none of the versions so far have sufficient evidence.

Up to these days, Bessarabka could have remained a place with uncertain reputation, but the fate of the square and the whole city was decided by the good will of the philanthropist, the richest Kiev sugar-maker Lazar Brodsky. It is worth clarifying that the Jewish community of Kiev of that time, which by the way was one of the most numerous Jewish community in the Empire, had a tradition of supporting each other financially. Having built a synagogue, a Jewish hospital and a bacteriological institute in Kiev, the Brodsky family sought to prevent the decline of these institutions. Lazar Brodsky, who died in 1904, left the necessary 500 thousand rubles for the construction of the market for the city.

No one then could know that in 10 years the Bolsheviks would seize power in the country, thus ensuring the break of all the agreements that had been set before.

The Special Commission announced a tender for the development of a project; Warsawer Henry Gai, who had previously designed a covered market in his native city, won. The plan of the building suggested 31 outdoor shops and one restaurant; under the roof, there was space for 87 sales points for greenery and vegetables, dairy products and bread, 88 places for meat and fat sales, and 27 places for sale of fish. The net profit of the city was to be 10-12%. 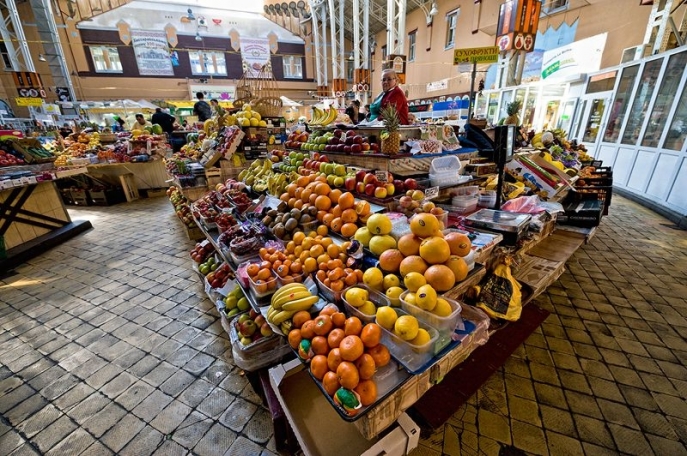 Today, the Bessarabsky market retains its elite status and is gradually evolving. The latter is evidenced by the presence of some of the most progressive Kiev restaurants and pubs, as well as by the initiative of Kiev volunteers, who in the autumn of 2016 aspired to create a new pedestrian zone around the market for the weekend, with entertainment and special atmosphere. This idea is not yet implemented, but there is progress – on December 22, a land crossing with a traffic light between the square and Khreshchatyk Street was finally organized; this is the event that almost all metropolitan residents were waiting for.

Kiev Polytechnic Institute was founded in 1898 and consisted of 4 departments: mechanical, agricultural, engineering and chemical. The first principal of the Institute was the famous scientist and teacher V.Kirpichev, and D.Mendeleev was the first chairman of the State Examination Commission in 1903. The founders of the KPI embodied the best traditions of the famous European technical schools: the Paris Ecole Polytechnique, the Aachen, Vienna and Magdeburg Technical Universities. This system of higher technical education was based on combination of natural science, fundamental training in physics, mathematics, chemistry and other disciplines and general engineering, as well as acquisition of professional and practical skills in industry and scientific institutions.

Igor Sikorsky, the world famous designer of aircraft and helicopters, Arkhip Lyulka, the creator of turbojet engines, Sergey Korolev and Vladimir Chelomei, the designers of rocket and space and aviation equipment, Ivan Bardin, the metallurgist, Alexander Mikulin, the designer of the aircraft engine as well as many other world-famous scientists studied in the KPI. 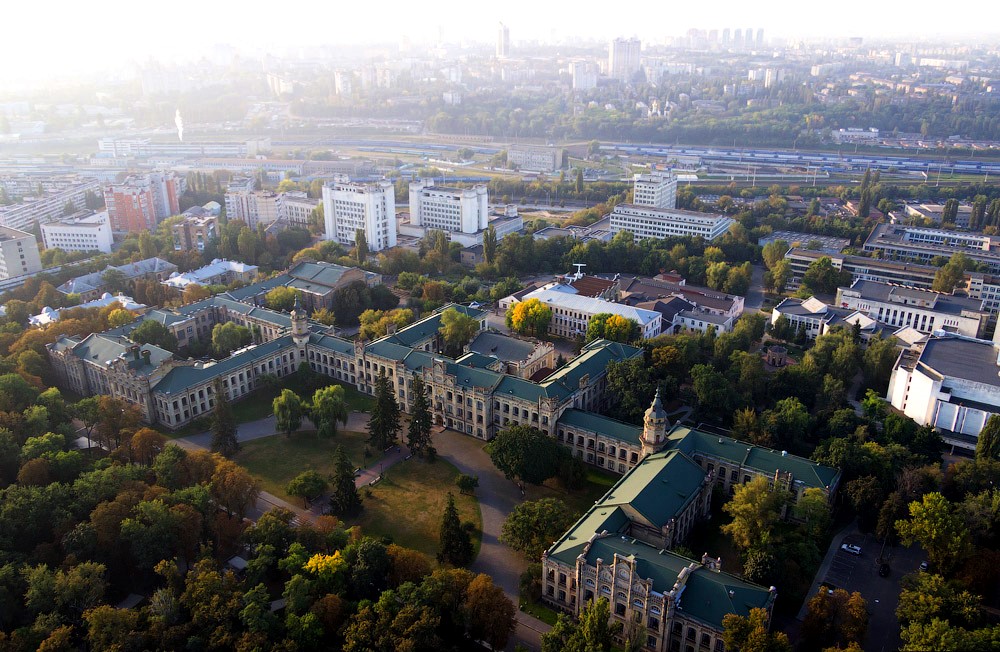 Today NTUU KPI is the largest technical university of research type in Ukraine, one of the leading universities in Europe and the world. There are about 30 thousand students in it, incl. foreign students. University buildings and dormitories form a small town in the capital of Ukraine.

As time went on, on the basis of the KPI, 12 universities were established in many regions of Ukraine, 9 of which today have the status of national ones. 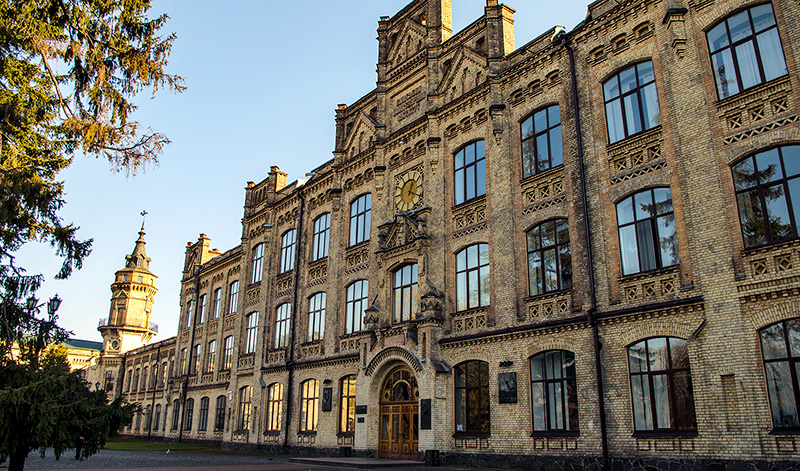 In September 2003, NTUU KPI was one of the first universities of Ukraine to join the commonwealth of universities that signed the Magna Charta Universitatum.

Contact Guide me UA to book Individual Tour in Kiev: 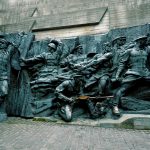 Kiev guide to the soviet past of Ukraine