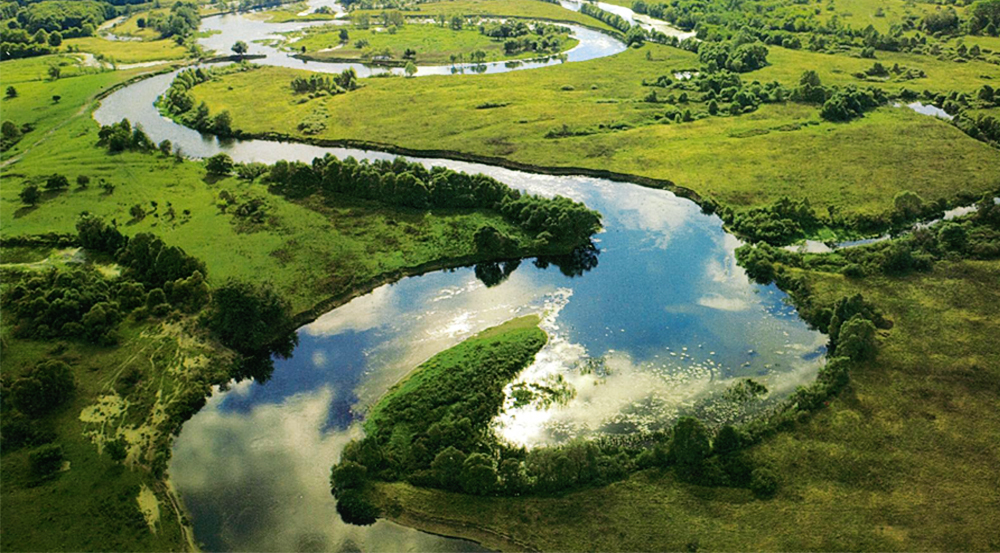 Dnieper River map – Secrets of the main river of Ukraine

The Dnieper is one of the European rivers that flow on the territory of three countries – Russia, Ukraine and Belarus. The mouth of this great river is located near the village of Bocharovo, located in Sychevsky district of the Smolensk region, in the south of the Valdai Upland; the river finishes its long journey falling into the Dnieper estuary of the Black Sea.

The Dnieper is the largest river in Ukraine; within the country, its length is 981 km. The Dnieper divides the territory of Kiev, the capital of Ukraine almost into two equal parts. Within the city the width of the river channel reaches 1.5 km, the depth is up to 9-12 m, the banks of the Dnieper are connected by 7 bridges.

History of the Dnieper River

Even in ancient times, the Dnieper was an important waterway. The first mention of the existence of this river is found in documents dating from the 5th century BC. It is worth noting that the river we call the Dnieper today had different names at different times. For example, Herodotus, ancient Greek scholar, called this river Borysfen, which in Greek means “river from the north”. As for the Ancient Rome, then the Dnieper was called Danapris, and Slavic people called it Slavutich. Now the river is called the Dnieper, which means a “deep river” from the Scythian.

The history of the Dnieper is very closely connected with the famous trade route “from the Varangians to the Greeks“. In those times, this river connected the Baltic states with the Black Sea Coast. Over the years, people could not reclaim the Dnieper due to the many natural rifts in the lower part of the river. This problem was solved only by the construction of the Dnieper Hydroelectric Power Plant dam. It was after this that people were finally able to cope with natural obstacles.

The greatness of the Dnieper is also due to the fact that it played a significant role in the history of the formation of the Old Russian state, whose capital (now the city of Kiev) was founded in the 9th century on lands extending around the middle reaches of the Dnieper. In the 17th century, land near the lower Dnieper was developed. This is where Zaporozhskaya Sich appeared and soon became the center of the Ukrainian Cossacks. From history, it is known that in 1648, it was from here that Bogdan Khmelnitsky and Cossacks’ army went into battle to the west. 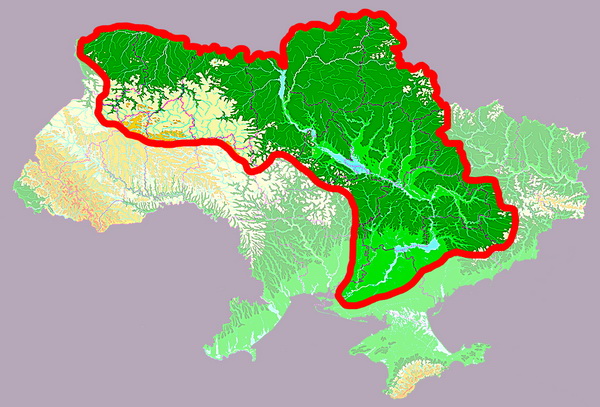 Due to its rapid development, the middle part of the Dnieper soon became the so-called center of the future Ukraine. Over time, large industrial cities were founded here: Dnepropetrovsk (Ekaterinoslav), Dneprodzerzhinsk (Kamenskoye), Nikopol, Kremenchug, Zaporozhye (Aleksandrovsk).

During the years of the fascist occupation, the Germans wanted to make the Dnieper an insurmountable defensive line. However, during the battles for the Dnieper, which took place here in 1943, they failed to make it a reality.

Over the years, scientists observe the river, especially during spring floods. In their opinion, the nature of the river is very volatile. The Dnieper has several feeders: Desna, Berezina, Sozh, Seim and Pripyat. Every year in the period of floods, the river increases significantly. Usually the spring floodplain of the river was up to 10 km; however, local residents repeatedly witnessed significant floods. As archival documents say, the most destructive floods occurred in 1789, 1845, 1877, 1882, 1895, 1908, 1917, 1931 and 1942. During these years, the residents of Trukhanov Island, Obolon, as well as the settlements and villages located on the left bank of the river suffered most. To help the victims, the city authorities provided them with temporary accommodation in the Contract House on Podol. They received food from the city, almshouse, the monastery of Flora and Lavr, as well as from residents of Kiev. When flooding was over and the river was back to its usual course, most of Obolon’s residents moved to Lukyanovka and Tatarka, as well as to those areas of the city that were unpromising. To solve the problem of spring floods, the city authorities took serious measures. Therefore, large and small dams were built in this part of the Dnieper.

Despite the devastating consequences of spring floods, they naturally changed the outlines of Kiev. According to scientists and historians, earlier there was no Rusanovskii Gulf and Strait, as well as no Hydropark Island. For example, Rusanovskii Gulf appeared in the early 19th century as a result of the natural confluence of several lakes, namely Rusanivsky, Vasilievsky and Svyatishche Lakes. After another spring floods, which occurred in 1877 and 1882, Rusanovskii Gulf became a strait. In those years, because of serious flood, a powerful stream literally broke through the Dnieper dam, destroyed the Rusanovsky wooden bridge and destroyed the Chortorisk dam. The result of these destructive events was the emergence of a modern Hydropark.

Spring floods also caused the appearance of Trukhanov Island, which was formed in its present outline almost 3 centuries ago. In those distant times, because of a strong spring flood of the Dnieper, the island split in two. Today the northern part of this island is called Muromets.

Despite their natural disasters, which made the life of people difficult, the Dnieper also brought them great benefits. After the river was back to its usual course, the banks of the river were always covered with lush grass that was especially good for the cattle, and residents of the city, as well as villagers from the Kiev and Chernigov gubernias used it. The small lakes that appeared after the flood were rich in fish, and local residents used it for food for themselves and their families.

The Dnieper banks were also famous for osier growing here; this enabled the inhabitants of the left bank to do the handicrafts. The inhabitants of Vygurovschina and Troyeshchyna were especially good in weaving from the osier. They made and sold various household items: baskets, shelves, screens, travel suitcases, chairs, cabinets, sofas, children’s cradles and even hats, and much more.

Because of this wayward nature of the Dnieper, the inhabitants of present-day Kiev and the adjacent territories are still worried during the spring flood of the river. These disturbances are by no means devoid of common sense. Despite the fact that the city authorities take all measures to prevent the devastating consequences (the constant work of various services that monitor the level of water in the river, strengthening of the left bank and Obolon with the help of a high concrete dam), nobody can predict how the Dnieper will behave in the springtime.

Of course, the Dnieper is a beautiful, proud, wide, mighty and majestic river, as described by great poets and writers – Bulgakov, Shevchenko, Gogol and Nechuy-Levitsky. At the same time, it can become a cause of disaster in a moment.

Secrets of the Dnieper: what is stored on the bottom of the main waterway of Ukraine?

Very few people know what secret treasures are stored on the bottom of the largest river of Ukraine. Even the Ministry of Infrastructure that controls all the reservoirs of the country, do not know how many sunken boats are there, not to mention the real treasures lost by Vikings, Scythians, Cossacks hundreds of years ago.

However, professional divers, who constantly explore the bed of ancient Slavutich, regularly find new objects. “Most often, at the bottom of the Dnieper we find the remains of ancient animals, in particular the teeth of ancient animals (we believe these are of mammoths), skeletons and teeth of tours (ancient bulls), which are 3-4 thousand years old. These are often found in the part of the Dnieper on the site from Dneprodzerzhinsk along the channel of the Dnieper in the direction of Zaporizhzhya. However, we have not yet succeeded in establishing the reliability of these findings, we handed them over to the employees of different Ukrainian institutions, and they now determine the kinds of animals the ancient remains belong to. We keep some findings at home as trophies”, diver Andrei Vorobyov says.

Experts say the biggest problem of the underwater world in the Dnieper is the “metalworkers” who hunt for any metal objects, including those that are historically important; they cut their findings to make a profit by handing the find over to scrap metal. “There are many remnants of floating wharves in the river, including wreckage since the Great Patriotic War, for example, a barge or landing craft that took part in crossing the Dnieper during the fight for Zaporozhye”, diver Roman Likhatsky said.

As for small finds, which have historical value (coins, ancient amphoras, anchors), divers hand them over to local museums in Zaporozhye and Khortitsa. According to enthusiast submariners, the state does not finance such expeditions, although diving is quite costly. Only the cost of professional underwater equipment costs $4-5 thousand. Therefore, many secrets of the Dnieper have not yet been solved.

Wooden ship on the underwater rock 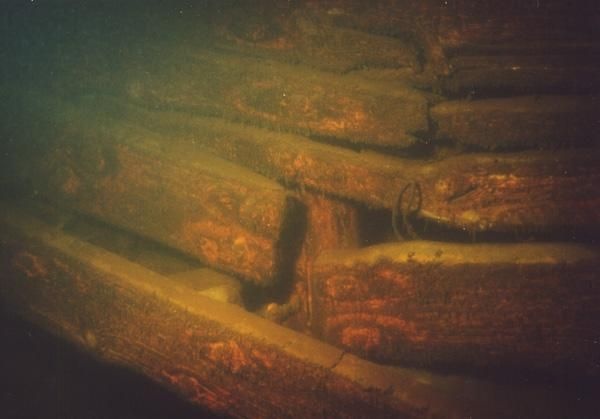 The Kichkassky Bridge, blown up by Father Makhno 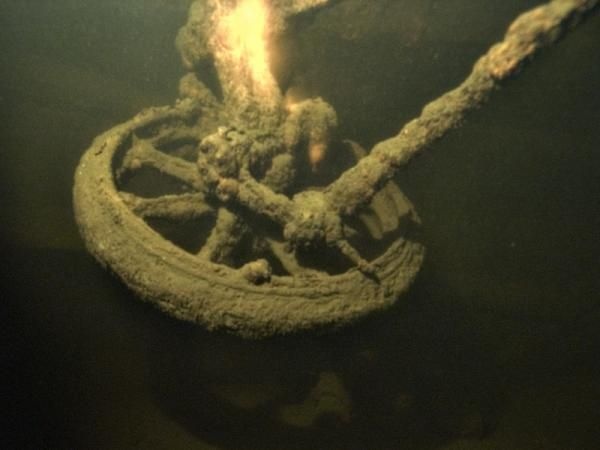 Bridge and wagons. They rest on the 55-meter depth.

Kichkassky bridge in the Zaporozhye region was built in 1904. At that time, it was the only railway artery connecting the south and the center of Ukraine. During the civil war, the bridge was considered a strategically important object, because it transported troops, ammunition, wounded, and medicines. In 1920, when retreating under the advance of the Red Army, Father Makhno blew it up. Then, together with a part of the metal bridge, a whole echelon sank in 55-meter deep of the river. “Now the railroad bed and six broken wagons are lying on the bottom; only the wheels remained untouched, but they are of no historical value,” the diver Roman Likhatsky said. According to him, there are several versions about the wagons – some assure that they were filled with grain; other insists those were the passenger cars and they transported the wounded, but at the time of the explosion, there was nobody inside. 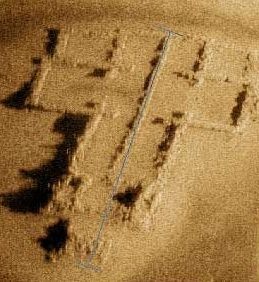 The footing of the underwater temple.

There are many legends about numerous churches on the bottom of the Dnieper River. However, after scanning the riverbed, it turned out that these are not legends. Underwater photographs taken in the Dnipropetrovsk region show clear outlines of the footing of the Christian church, which, as is known, are still being built in the form of a cross from east to west.

Experts are still trying to find the mystical Taras Bulba cave that according to legends is located in this part of the Dnieper; they believe that the cave has a small opening in the human growth, and this is how you can get into a fairly spacious room where about 10 people can sit. But the most incredible thing is that in the middle of the cave there is a hewn stone table and bench. It is rumored that this is the work of prisoners who escaped from prisons.

There are ships, floating workshops, restaurants and even hotels in the Dnieper waters near Kiev. 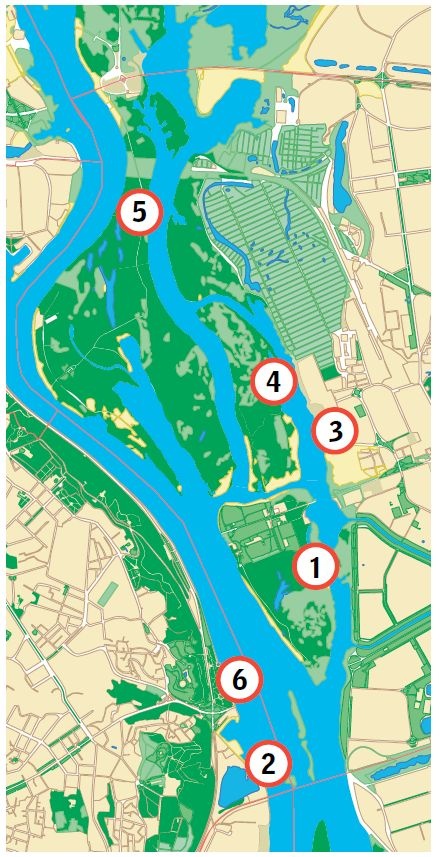 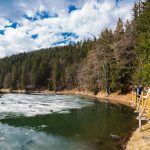 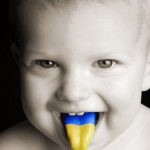 What language is spoken in Ukraine