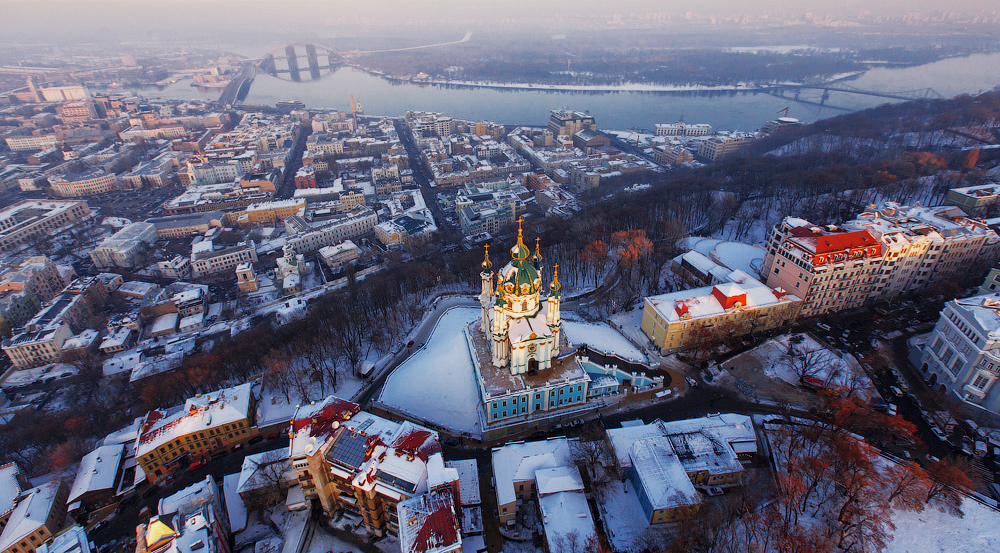 #10YearsChallenge: How Kyiv has Changed in 10 years

#10YearsChallenge has become very popular on social networks – users brag on how they have changed and what they have been able to achieve in 10 years. Therefore, we decided to challenge Kiev and see what has changed.

Important Kiev Sights Then and Now

Renovation, construction and dismantling – what did the people of Kiev remember for these 10 years?

This is the main arena of Ukraine and one of the largest stadiums in Europe. It was built in 1923. During its existence, the stadium was reconstructed four times; nine times, it changed its name. In 1996, the complex got its current name – NSK “Olympiyskiy”.

The last reconstruction of the complex began in August 2008 as part of the preparation for the final part of the 2012 UEFA European Championship in Ukraine. After commissioning, UEFA ranked the NSC fourth, highest category. This year, the organization assigned the status of “elite” to the complex. 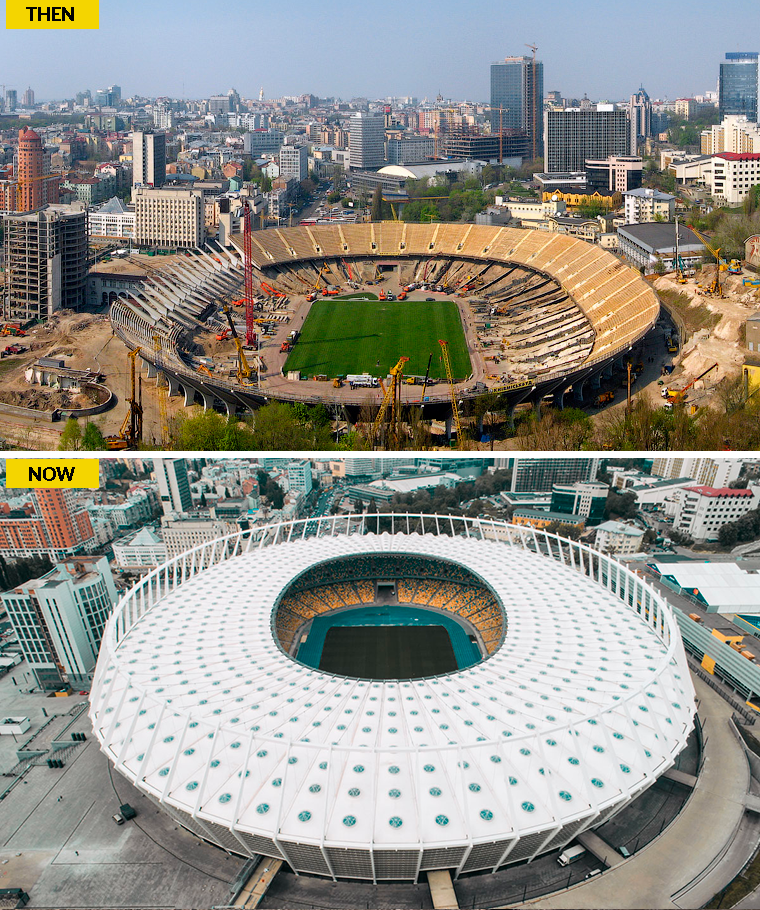 NSK “Olympiyskiy” is almost a record holder when it comes to number of times reconstructed – the building was rebuilt and redesigned four times. The last reconstruction began in 2008 before the finals of the European Football Championship.

It took four years to renovate the legendary department store – from 2012 to 2016. The British company Benoy was engaged in the architectural project, the German company Landor developed the TSUM brand, and Philippe de Bouvoyard, head of the Bon Marche department store in Paris, became the project consultant.

After reconstruction, the facade of the Central Department Store has retained its historical appearance. However, inside the department store has changed dramatically: its area has doubled to 45 thousand square meters, and the number of floors has grown to 10, two of which are underground parking. Now at TSUM there is a food court and panoramic terraces. 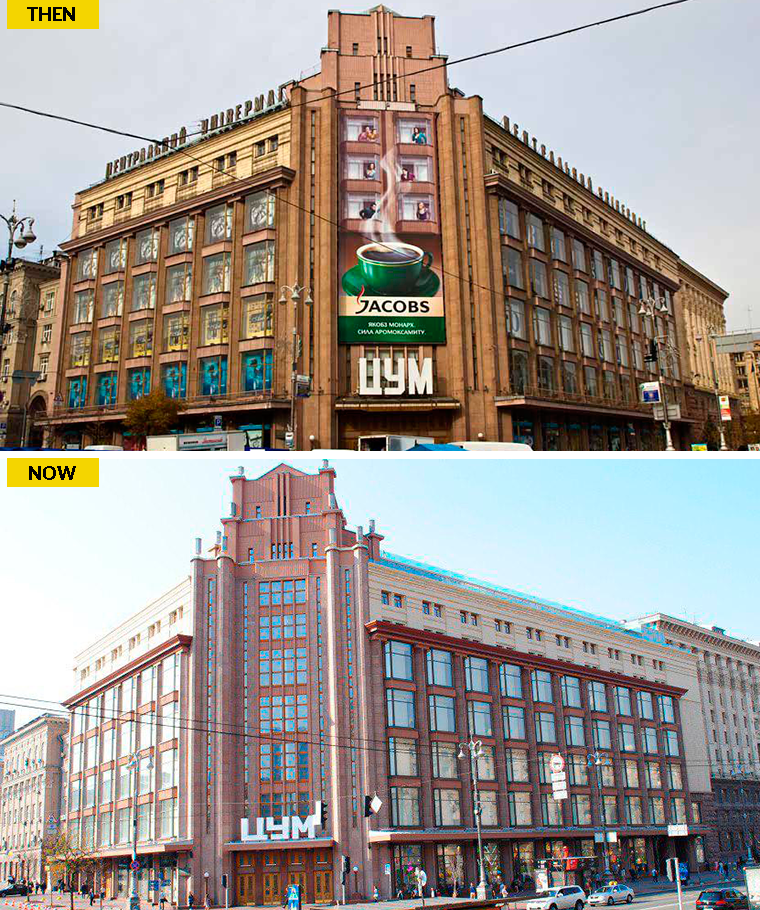 TSUM before and after renovation. It took four years to renovate the legendary department store. Its area has doubled to 45 thousand square meters, and the number of floors has grown to 10.

Since 2017, Obolon has not only the embankment, but also a well-kept park. Previously, this area was abandoned, and theн even wanted to build several residential buildings here. However, the residents of Obolon defended the Natalka area and now they can walk, run and enjoy picnics in the park.

Bicycle paths were equipped here, many arbors, benches and new lighting system were installed, sports and children’s playgrounds were equipped. This recreational zone has rightfully become one of the most beautiful in the city. 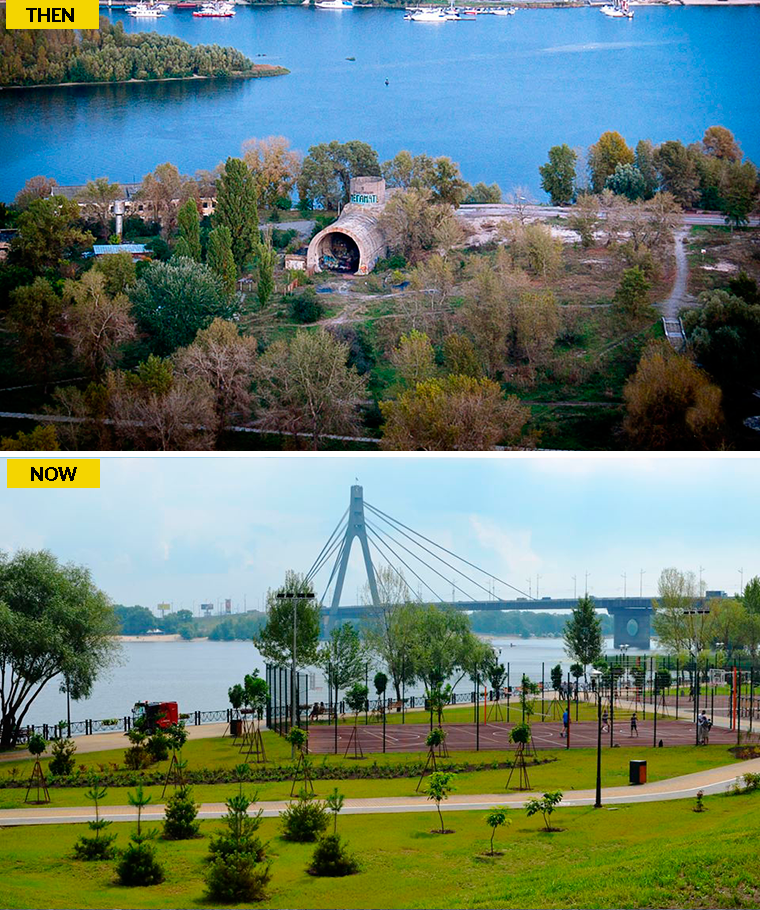 The activists defended the Natalka area, and now there is a wonderful park. It is one of the most beautiful in Kiev.

Now in Kiev there is not a single monument to Lenin. It was believed that the last monument of the leader of the proletariat was demolished in the spring of 2017 in the Goloseevsky district of the capital. However, after half a year, another one was found in Kiev: it was hiding in the bushes on the territory of the former greenhouse farm in the Obolon district. Soon this monument was also dismantled, this time finally saying goodbye to the totalitarian era. 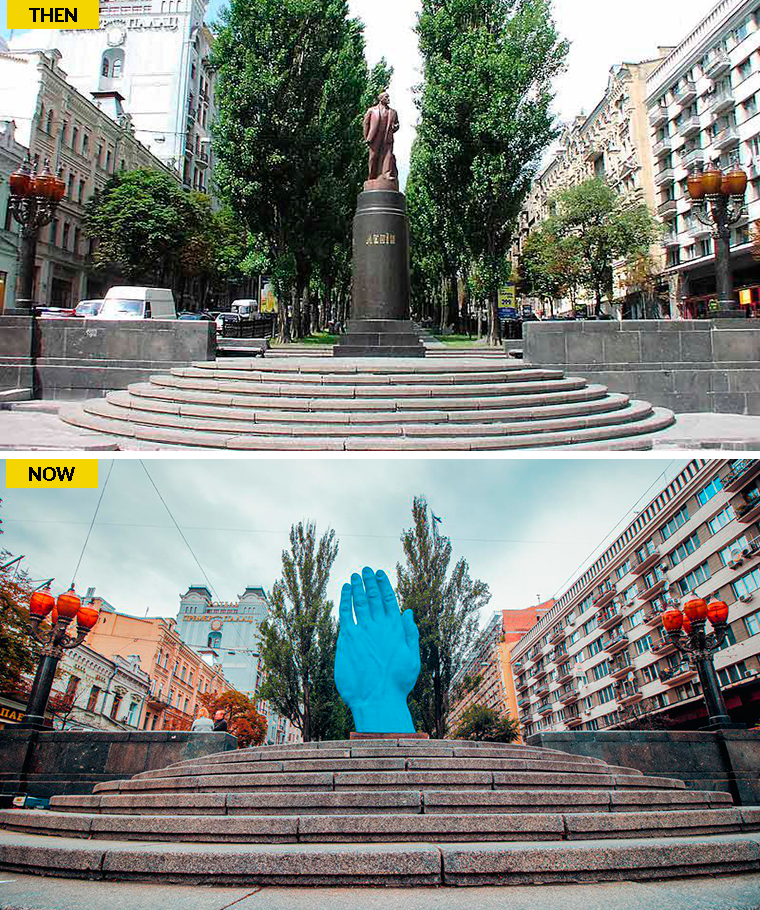 It is not the appearance of the street that has changed so much but its significance in the modern history of Ukraine. In February 2014, activists of the Revolution of Dignity were shot here, and from that moment, Instytutska Street became a kind of memorial. In honor of the dead, a part of the street, which is adjacent to Maidan Nezalezhnosti, was renamed the Alley of the Heroes of the Heavenly Hundreds. This year they plan to open the National Memorial Complex of the Heroes of the Heavenly Hundreds. 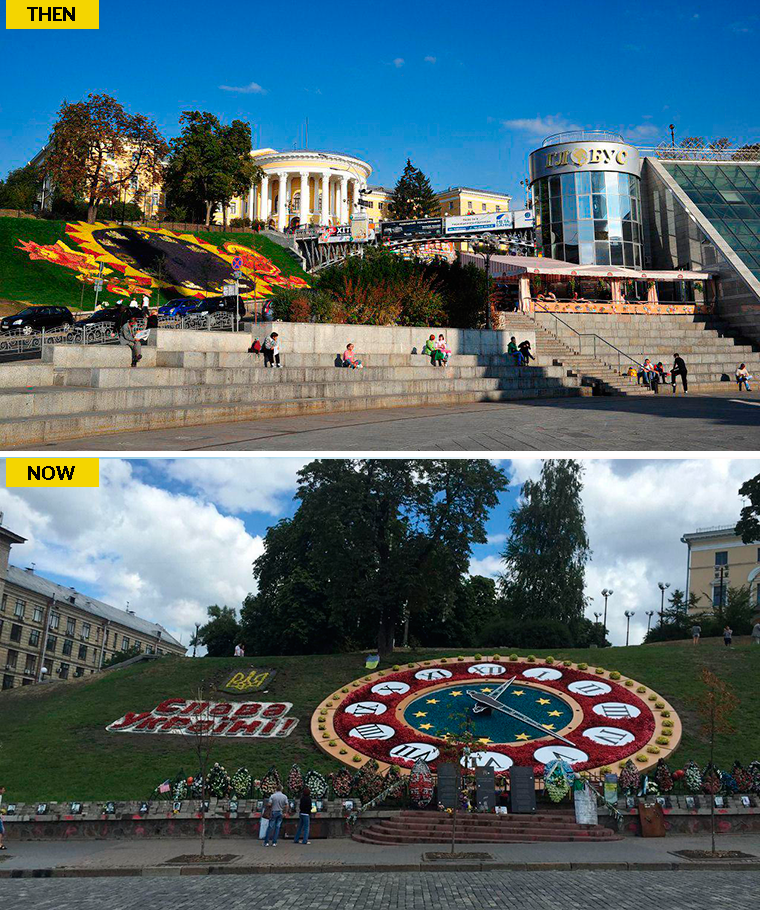 Instytutska Street before and after the Revolution of Dignity. It is not the appearance of the street has changed not so much but its significance in the modern history of Ukraine.

One of the oldest squares in Kiev; its renovation started in 2012. Theylanned to reorganize the land part of the square and build underground shopping center. The first part of the project was completed in the summer of 2015, the second was about to be completed in the spring of 2016. However, work underground was suspended when, during excavations, archaeologists discovered historical artifacts and the city’s port quarter.

The Kiev authorities promised that they would open a museum at the excavation site, and stop the construction of the mall. However, as of today the excavations are only excavations and nothing more. The ground part of the square has changed significantly after the reconstruction: the pedestrian zone was expanded here, a viewing platform was equipped, and sculptures of the prototypes of the founders of Kiev – Horeb, Schek, Kyi and their sister Lybid were installed. 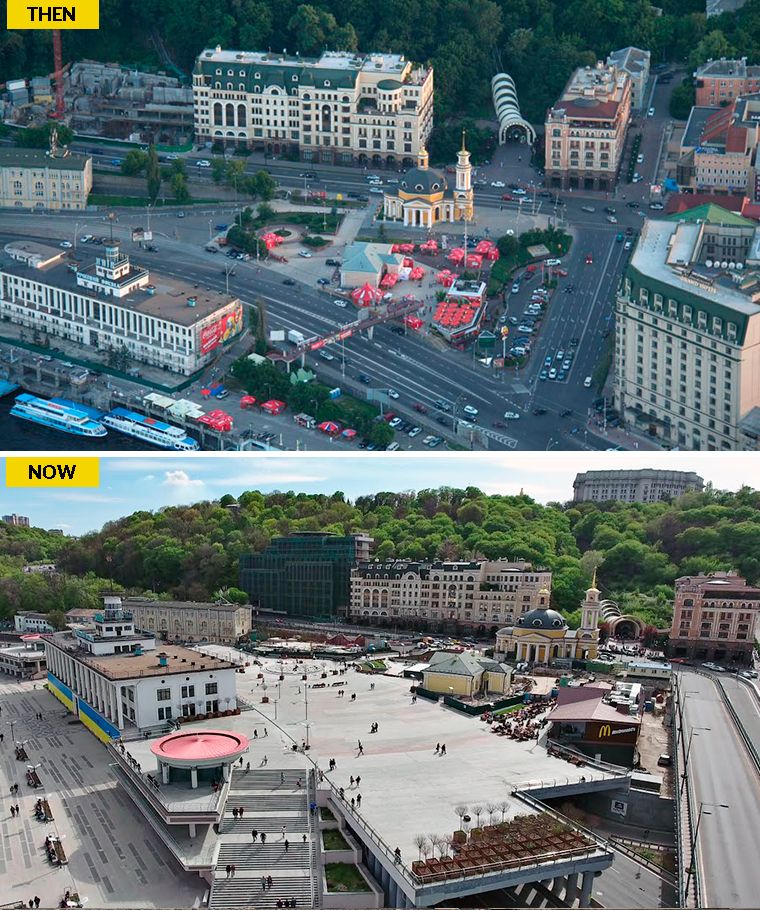 Pochtova Square before and after reconstruction. During the latter, historical artifacts and the port quarter of the city were found here. However, the promised museum is not yet here.

This building, built in 1980, burned down on the night of February 19, 2014, during the attack of the Revolution of Dignity. At the time of the fire, there were activists, including the wounded in the building. To escape, people had to jump out of the windows. Later it turned out that two people had died in a fire in the House of Trade Unions, and the 41st had been saved.

According to the findings of the parliamentary investigative group, the building was set on fire during the attack by special forces. The House of Trade Unions severely burned out from within; it took about four years to reconstruct it. On November 21, 2018, the renovated building was opened. The Museum of the Revolution of Dignity opened in the House of Trade Unions reminds us about the events of 2014. 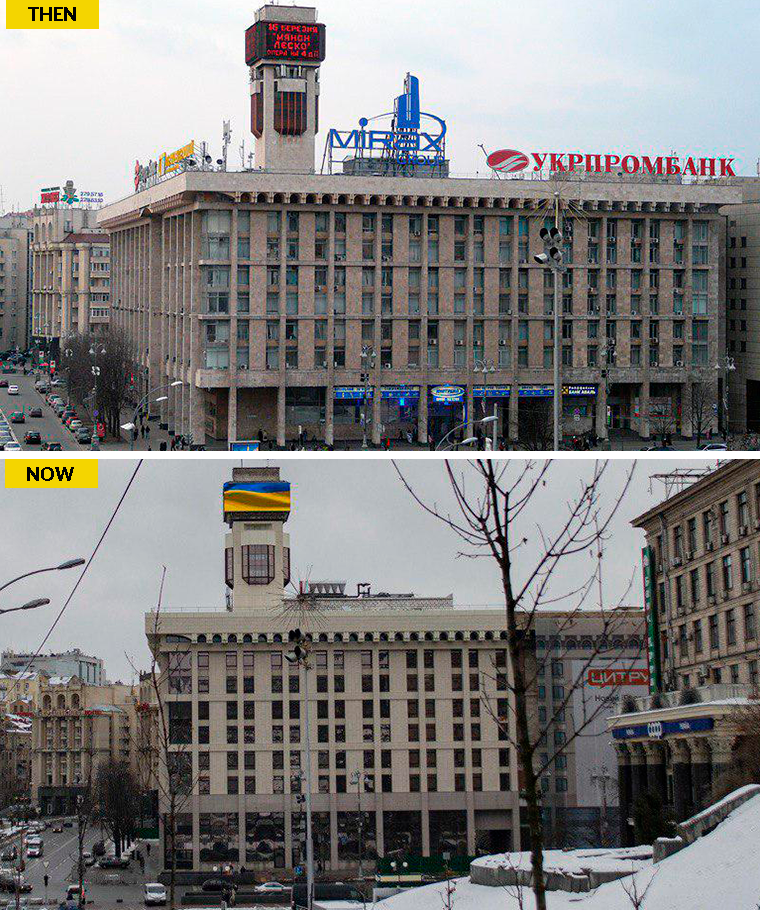 House of Trade Unions before the fire in 2014 and renovated after reconstruction.

Stairs on the Landscape Alley

This is one of the most ancient stairs of Kiev – residents of the city walked down its stairs back in the XVII century. Over time, it almost decayed, the stairs came in disrepair. The last time the stairs were repaired about half a century ago. However, in 2018, instead of the old wooden, they installed a new, concrete one with wooden elements. There are 247steps, staircase railings are highlighted. Now there is wi-fi and public toilet. The staircase is certainly very beautiful, but its reconstruction cost Kiev fabulous money – about 15 million hryvnia. 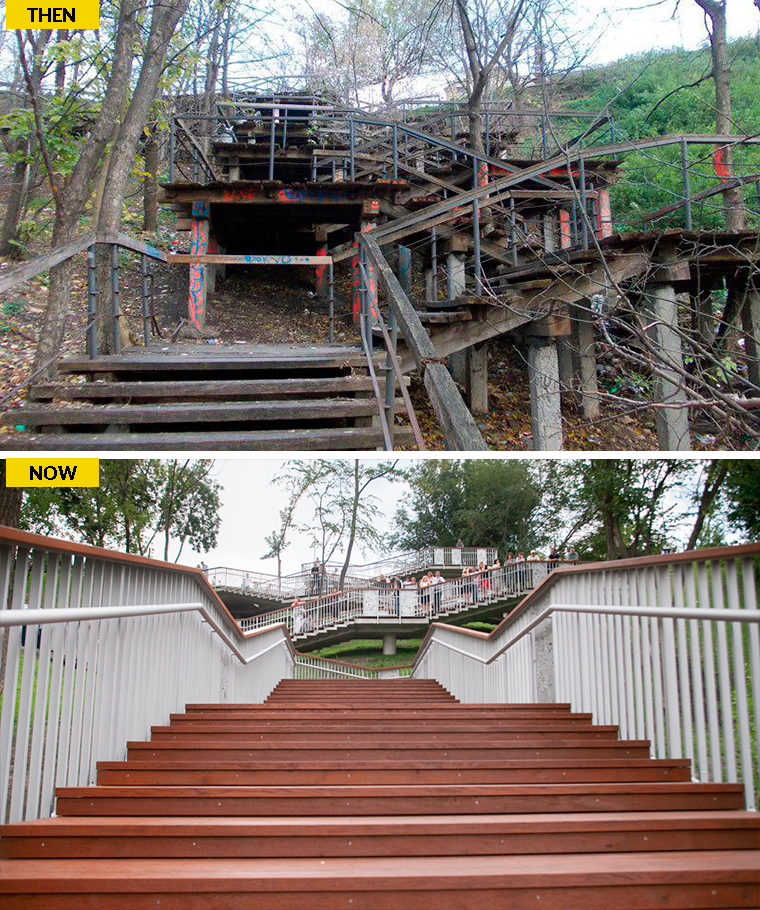 Staircase on the Landscape Alley before and after reconstruction. The latter cost Kiev fabulous 15 million hryvnia.

This is not only a super modern theater, but also one of the most scandalous – at least in Kiev. The result of its reconstruction angered many residents of the capital. The renovated theater building was called “sarcophagus”, “crematorium”, “box”. The fact is that the theater is located on Andriyivsky Descent, and its new look is very different from the general old style of this place: the building stands above the neighboring buildings, its black color is very unusual for this area as well.

Kyiv residents made memes of the building in social networks, registered petitions demanding to change the appearance of the theater or even demolish it. However, nothing came of it – the theater continues to look the same. In 2018, the building was even recognized as the best in the “Architecture of cultural and social facilities” nomination at the Ukrainian Urban Awards. 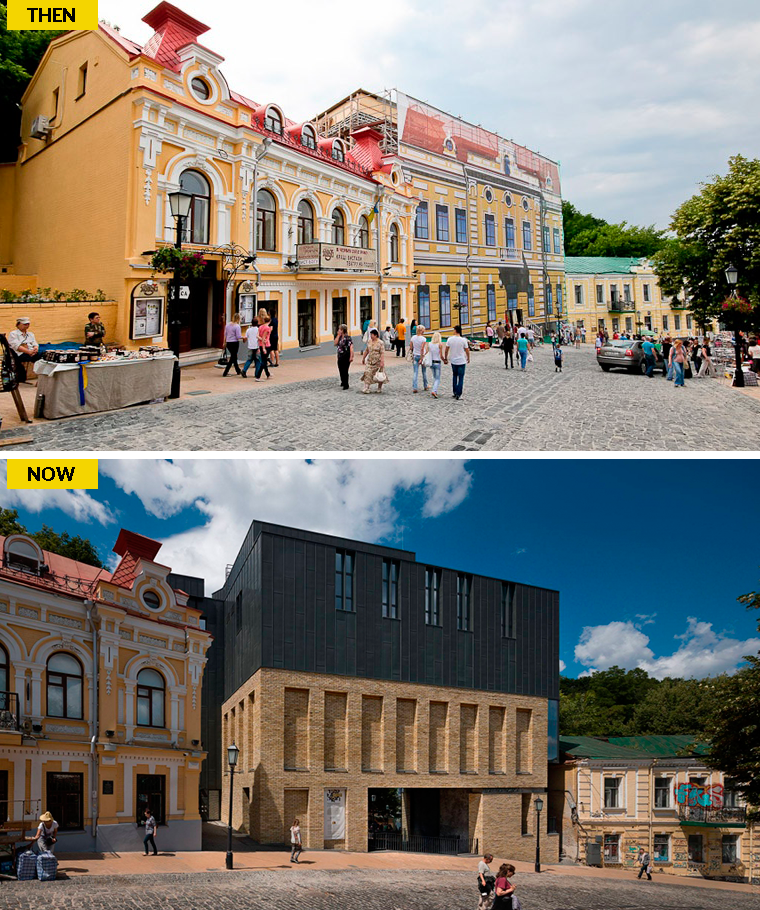 The building of the Theater on Podol was built and reconstructed for a very long time. In the process, the project has changed several times. 10 years ago, they were renovating Andriyivsky Descent, but it did not include the theatre renovation, so they just used the decoration to hide it from pedestrians.

For 10 years, six new metro stations have been built in Kiev – “Demiyivska”, “Golosiyivska”, “Vasilkivska”, “Exhibition Center”, “Hippodrome”, “Teremki”. All of them are on the blue branch. And in another 10 years we will check whether the plans of the metropolitan authorities for the construction of the metro to Troeschina and Vinogradar will implemented. 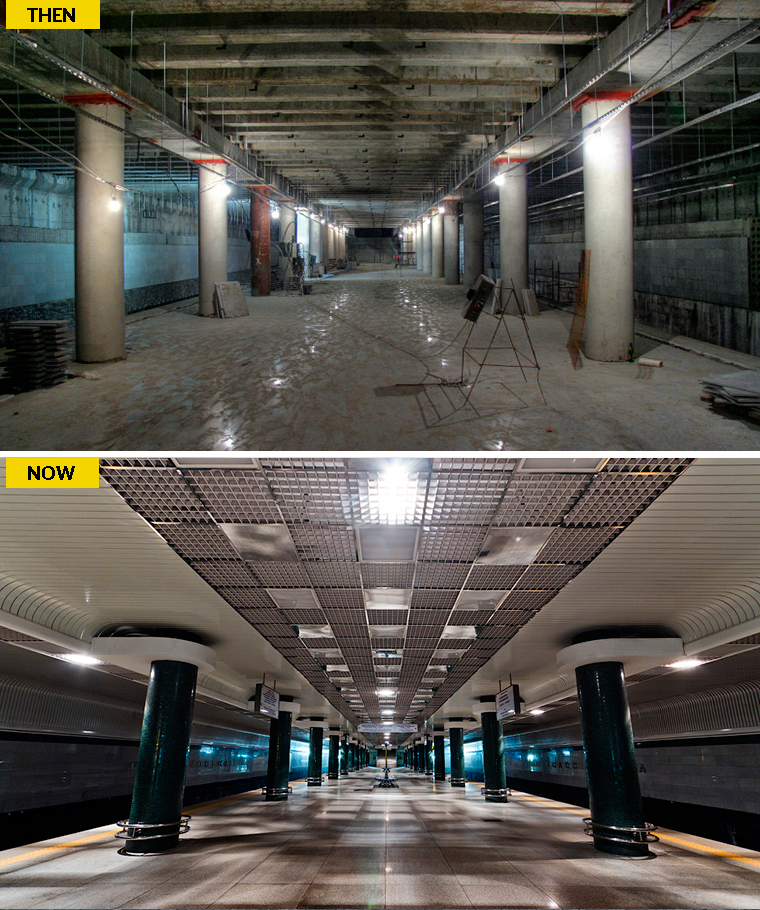 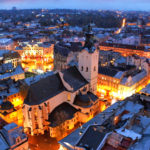 Tours to Ukraine from USA 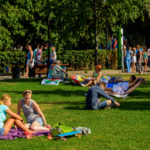 Kiev Weather in Summer. What to do in Kiev in Summer