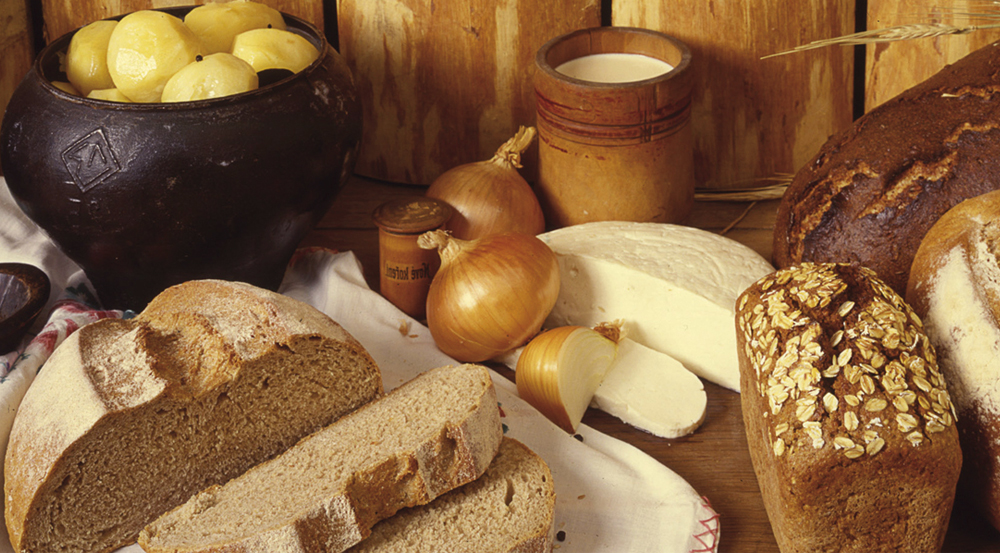 10 Most Popular Meals of Ukrainian Cuisine

Do you like tasty food? We definitely do! After all, Ukrainian cuisine is extremely diverse! It is really impossible to refuse a piece of homemade boiled pork or sausage, so you have to constantly lead active lifestyle. Not surprisingly, the topic of this article came to mind to one of our Kiev guides while he was having dinner. And below, he will share the most common dishes of the national Ukrainian cuisine.

Ukrainian cuisine is much similar to Polish and Russian; this is due to history, but despite this each of them is unique, colorful and very rich.

There is no daily meal of Ukrainians without soup. At least once a day you need to eat liquid soup! There is a great variety of soups in Ukrainian menu! Pickle soup, cabbage soup, pea soup, rice soup, buckwheat soup and many more. The assortment is quite large and varied. But the most traditional Ukrainian first course is red borsch.

I like borsch and cook it with pleasure. My grandmother taught me how to cook it without sautéing vegetables; it is much more useful and tasty. Ukrainian red borscht is brewed on a meat broth and pork.

Ukrainian borscht is best eaten when it is infused. It is served with pampushkas, topped with garlic sauce (crushed garlic with vegetable oil) and sprinkled with chopped herbs (dill or parsley). Ideally, pampushki should be home-baked, but if there is no time, you can buy ready-made in the market. As a rule, one adds a spoonful of sour cream into the borsch. It gives the dish a delicate taste. 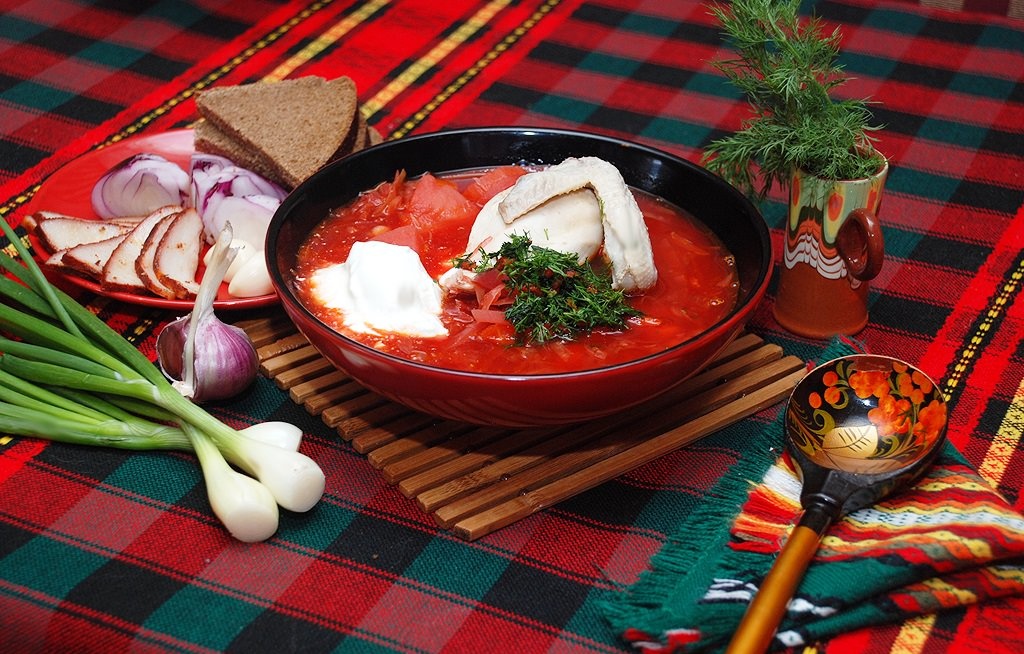 There is no Ukrainian borsch without pork fat. It complements many Ukrainian dishes. Well, truth be told, I also like lard and eat it with pleasure!) Earlier, my grandmother often salted salo in cans and it was enough for the whole winter and spring. I have not eaten such salo for a long time… In those days, the pig was burned with straw, and not gas as now. Thanks to this, the fat gained a pleasant aroma and incredible taste. It is often eaten with Ukrainian bread, horseradish or a clove of garlic or onions. I have just started telling about it, and I feel mouth-watering… 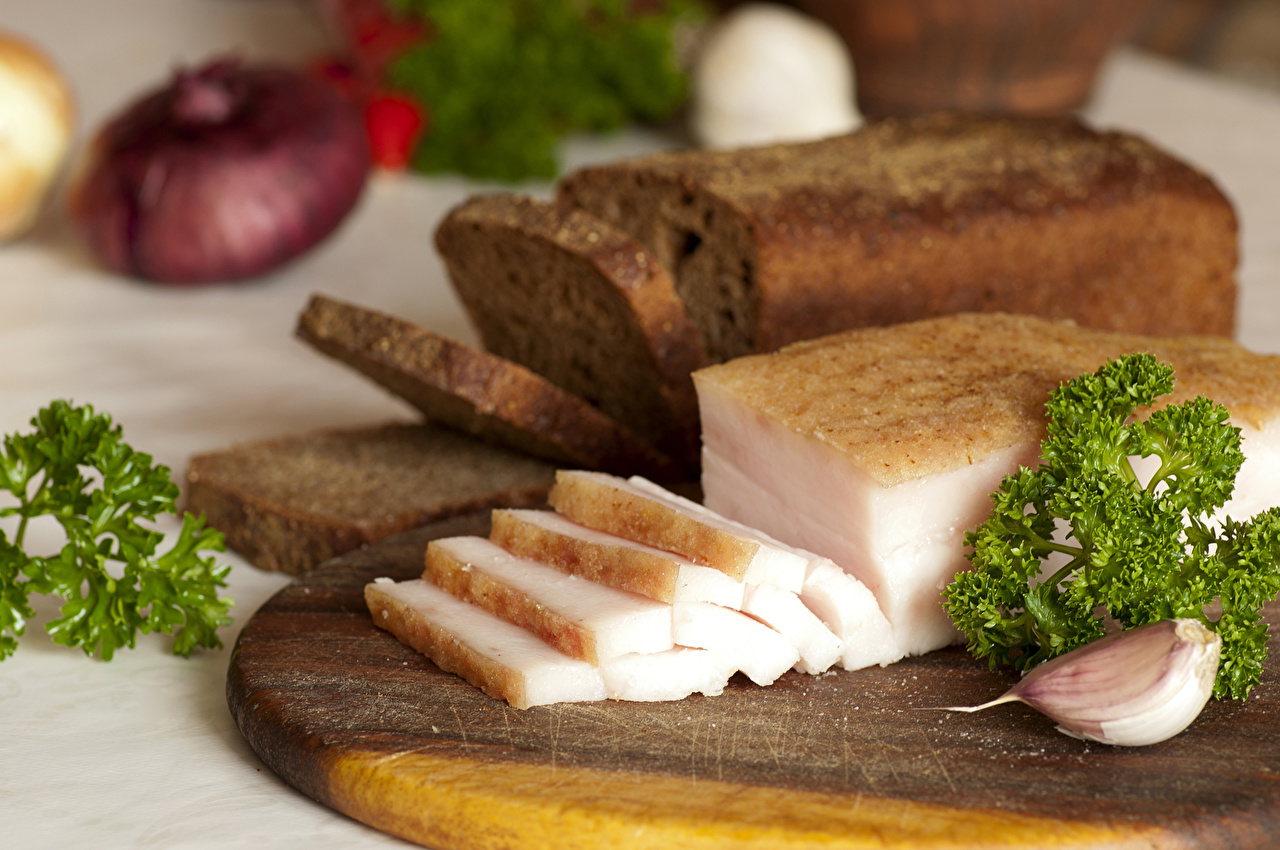 Ukrainian cuisine is quite nutritious and caloric. National second courses are mostly prepared with pork. The cook uses almost everything and even intestines. Yes! It is used to make incredibly tasty home-made sausage and black pudding.

Every Ukrainian mistress has her own secrets of cooking these dishes. I’ll write how my mom cooks homemade sausage.  Following her recipe, this dish is unbelievably delicious! We take thin pork intestines and clean them. The sausage stuffing consists of chopped pork and lard. We add lard to make the meal juicy instead of dry. The filling should be salted, peppered, with a pair of crushed garlic and 50 grams of vodka. We mix and using a special tube that is attached to the meat grinder we fill the prepared intestines. After this do not forget to grease the sausage with sunflower oil, puncture the entire length with the needle and put it in the oven. When the scents fill the house, take it out, it is ready. 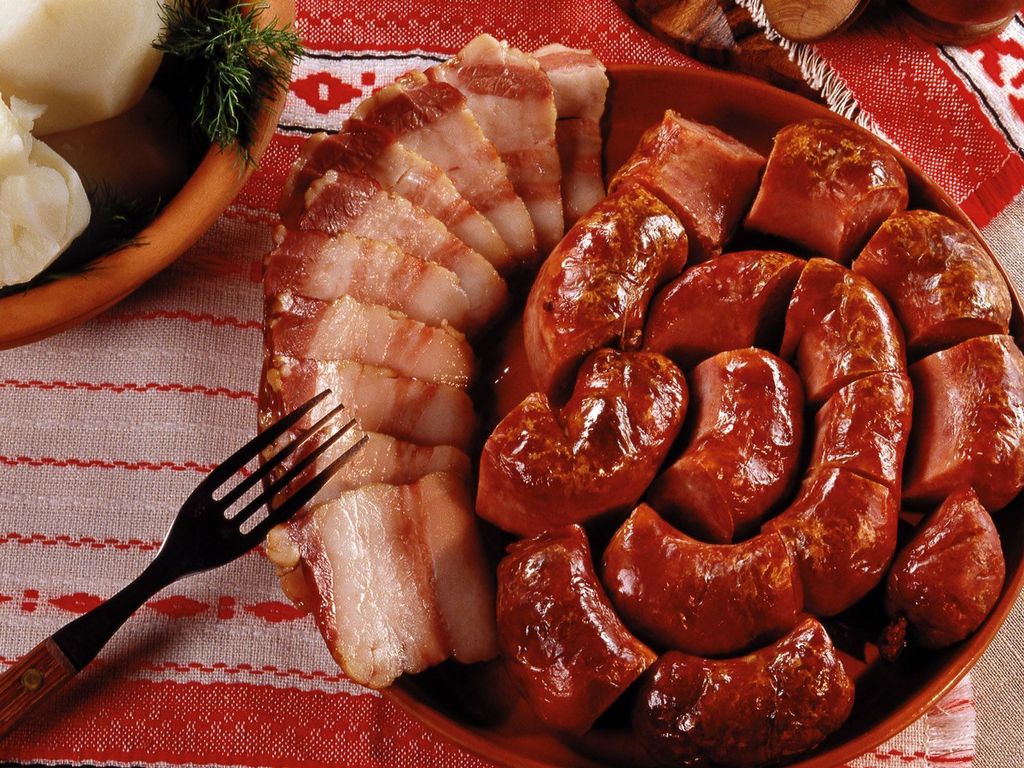 As long as I remember, bloody or as it is popularly called “the gut” was always cooked in my family. On holidays, as a rule it was Easter or Christmas, they stacked a pig and cooked black pudding. It consists of fresh pork blood, buckwheat, milk and belly bacon. It takes a lot of time to cook Ukrainian black pudding because before you fill the intestines, you need to cook and cool down all the ingredients. That includes half-cooked buckwheat, frying belly bacon with onion, boiling milk. For black pudding we need a thick pork intestine. It needs to be thoroughly washed and cleaned, soaked in a light vinegar solution. After that, it is filled with stuffing, piled in a saucepan and tinned on a small fire for three hours; after this, it should be cooled, fried in a pan on all sides and served.

Despite the fact that the porridge is a frequent meal in Ukrainian cuisine, the main side dish is still potatoes. There are dozens of ways to cook it! Potatoes can be cooked unpeeled, baked, fried, stewed, mashed. Vegetables are important addition to the main dishes and side dishes. In the warm season – fresh, often ripped from the beds: radish, tomatoes, cucumbers, cabbage, peppers and juicy greens. In the winter, these are pickles, pickled vegetables and salads in cans. 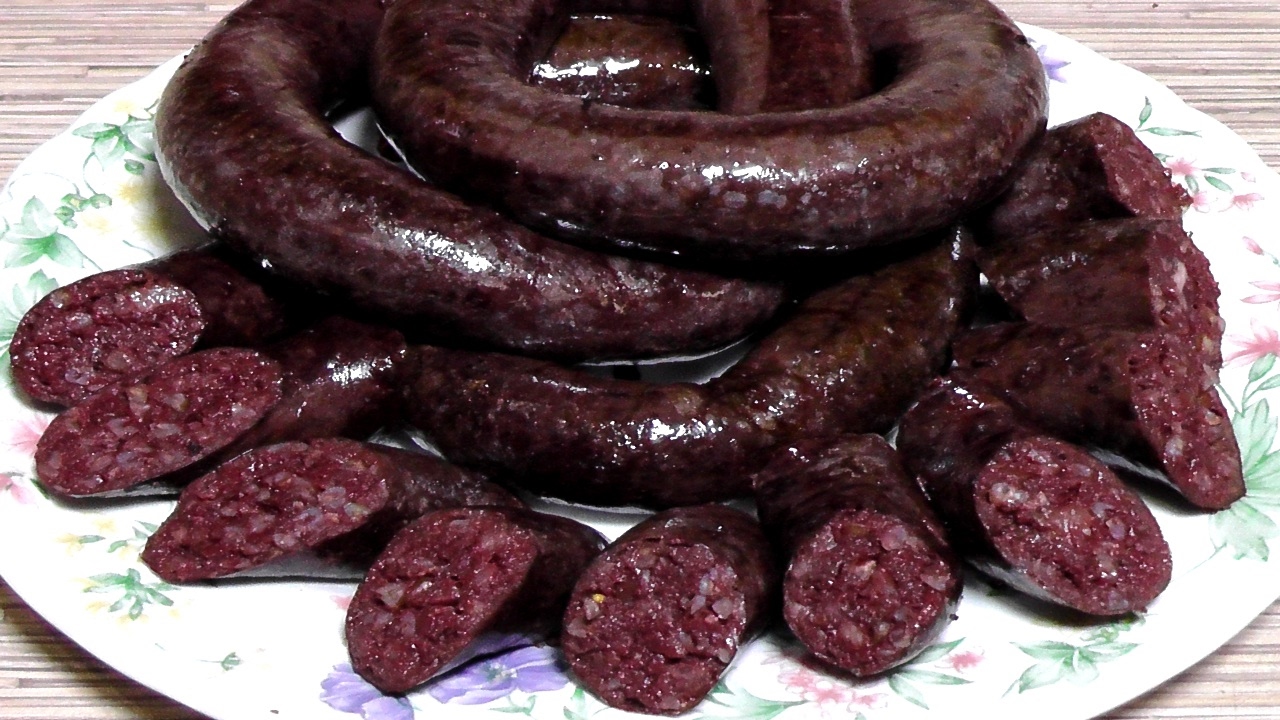 Baked meat with vegetables in pots

A very popular ancient Ukrainian dish is baked meal with meat. He who at least once tried this meal cooked in the oven will never forget the refined taste of meat melting in the mouth. It is traditionally cooked with meat. In a frying pan fry meat, onions, carrots and potatoes (peeled and sliced ​​into small pieces). Put everything in a pot; add spices, fragrant roots and greens. Bake in the oven. We often make this meal at home, and not only traditionally with meat; we often do it with vegetables, mushrooms or fish. It is always tasty and useful! 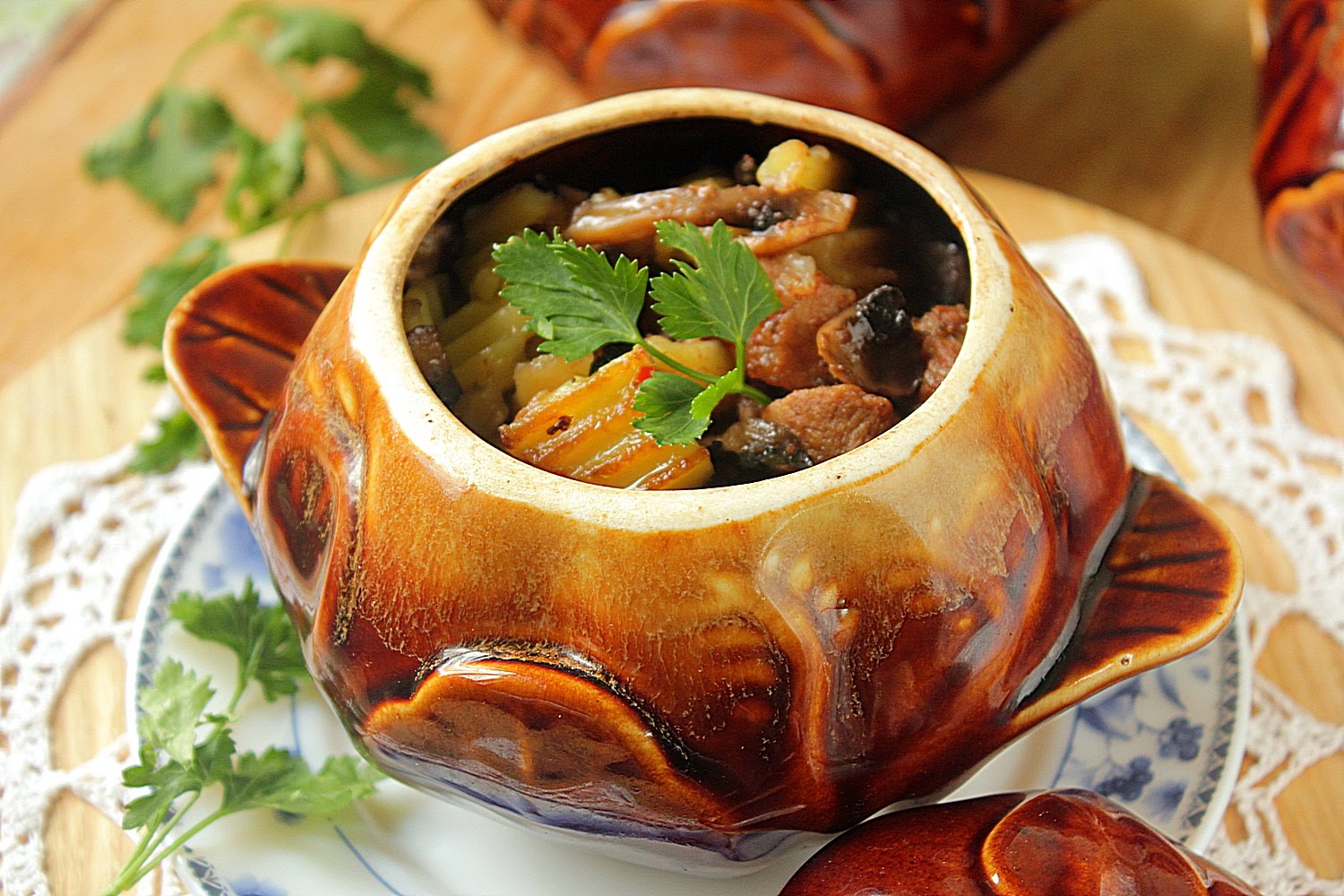 The other national Ukrainian dish is meat in jelly. It is cooked from rooster and pork legs. It should be cooked on the stove for about six hours. After that, it is filtered, poured into plates and placed in a refrigerator. As a rule, it is served with horseradish. 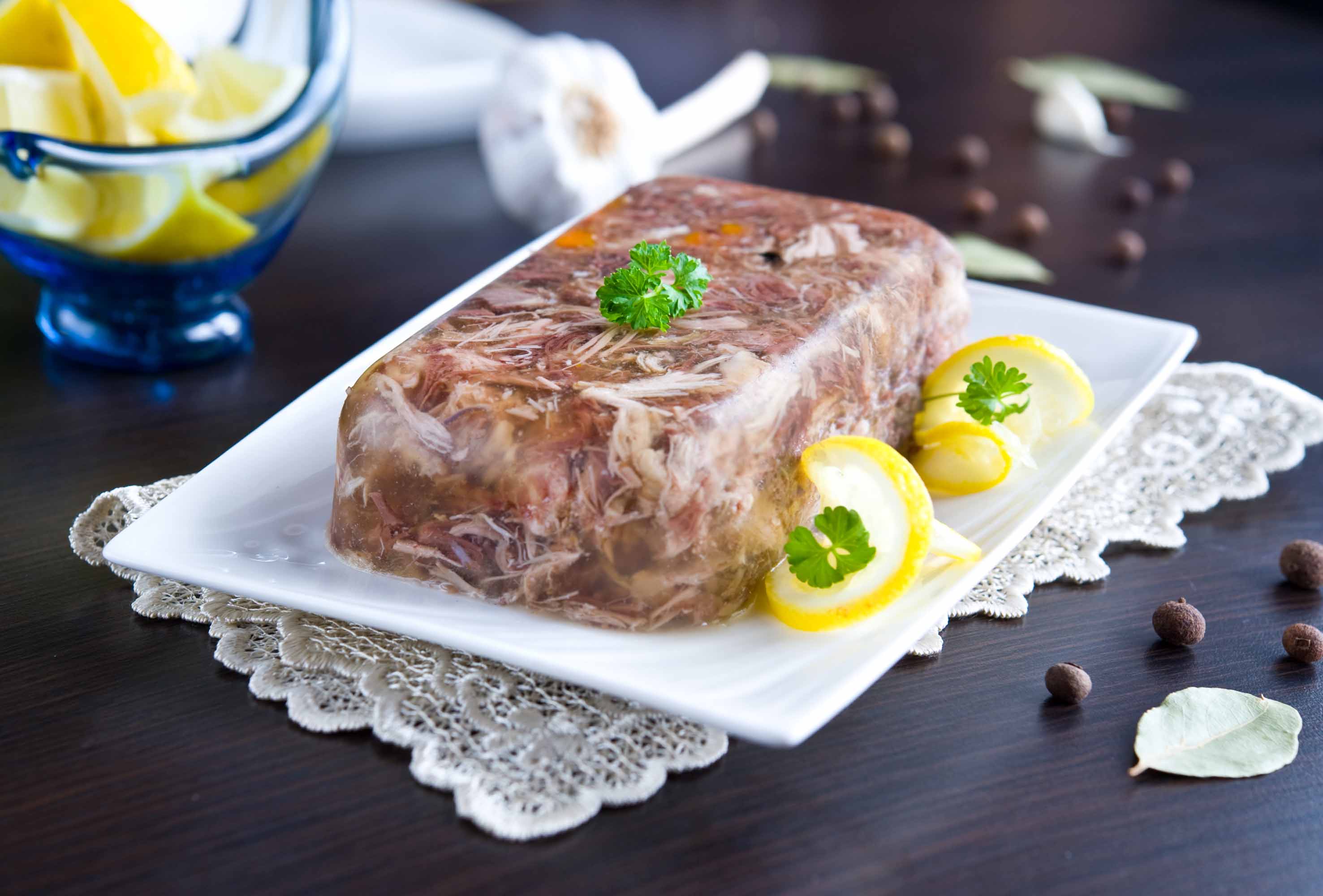 In Ukraine cabbage rolls are an integral part of every festive table. People of many countries also cook this meal but the recipe and ingredients are not the same. The basis of Ukrainian cabbage rolls is minced pork or 50/50 (beef and pork) and boiled rice. The filling is wrapped in pre-cooked cabbage leaves. Cabbage rolls are served with sour cream. 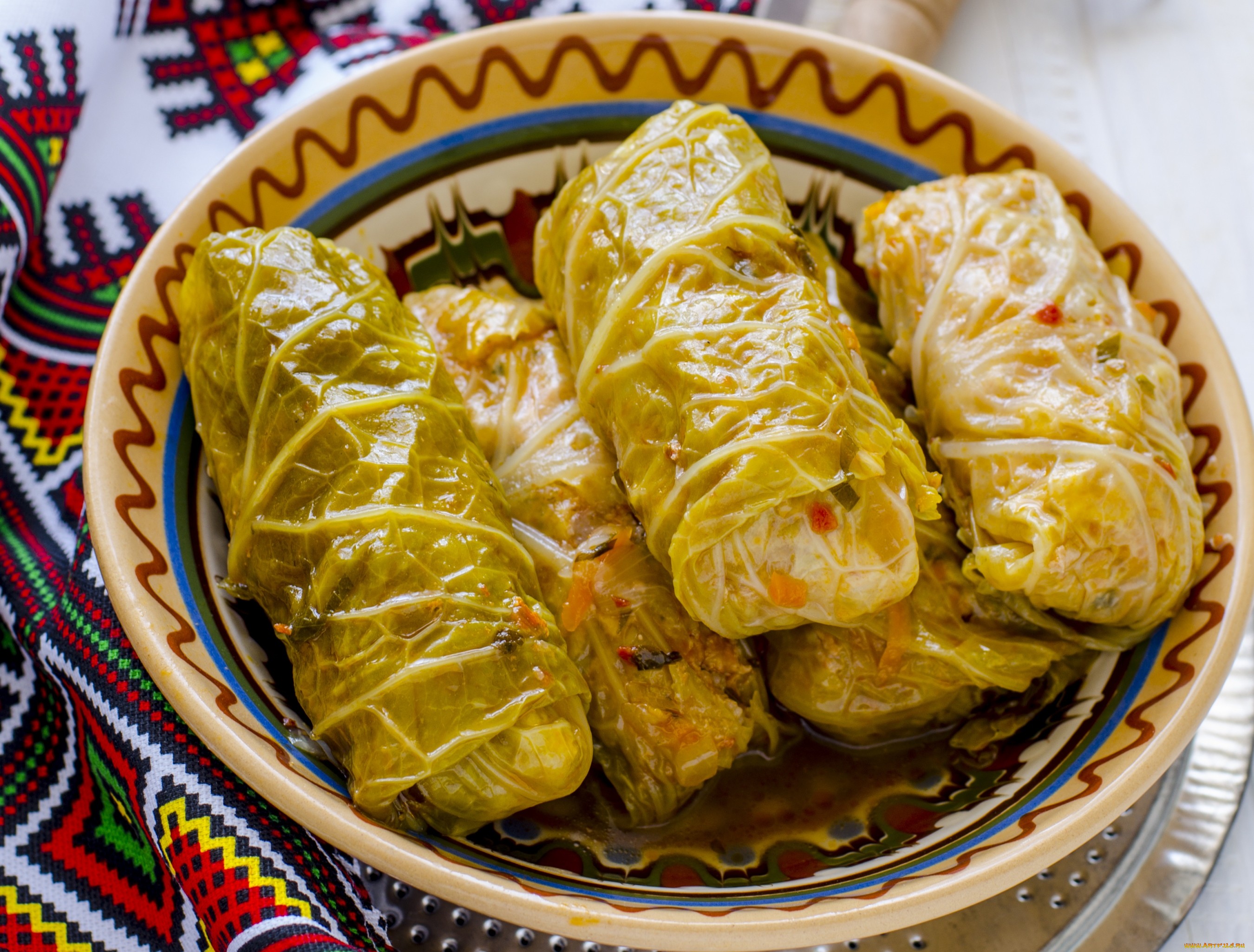 In Ukraine pastry was known and popular since the ancient times. In each house there was an oven to bake bread, buns, cakes and pies. The cook kneaded the dough with his hands in a large wooden barrel and we have to admit this is really hard work. As the time passed the ovens were replaced with stoves, but the tradition to bake remains. In Ukrainian cuisine pies are large rolls with cherries, cottage cheese, potatoes, peas and meat. They are home-cooked and differ in incredible taste and aroma. 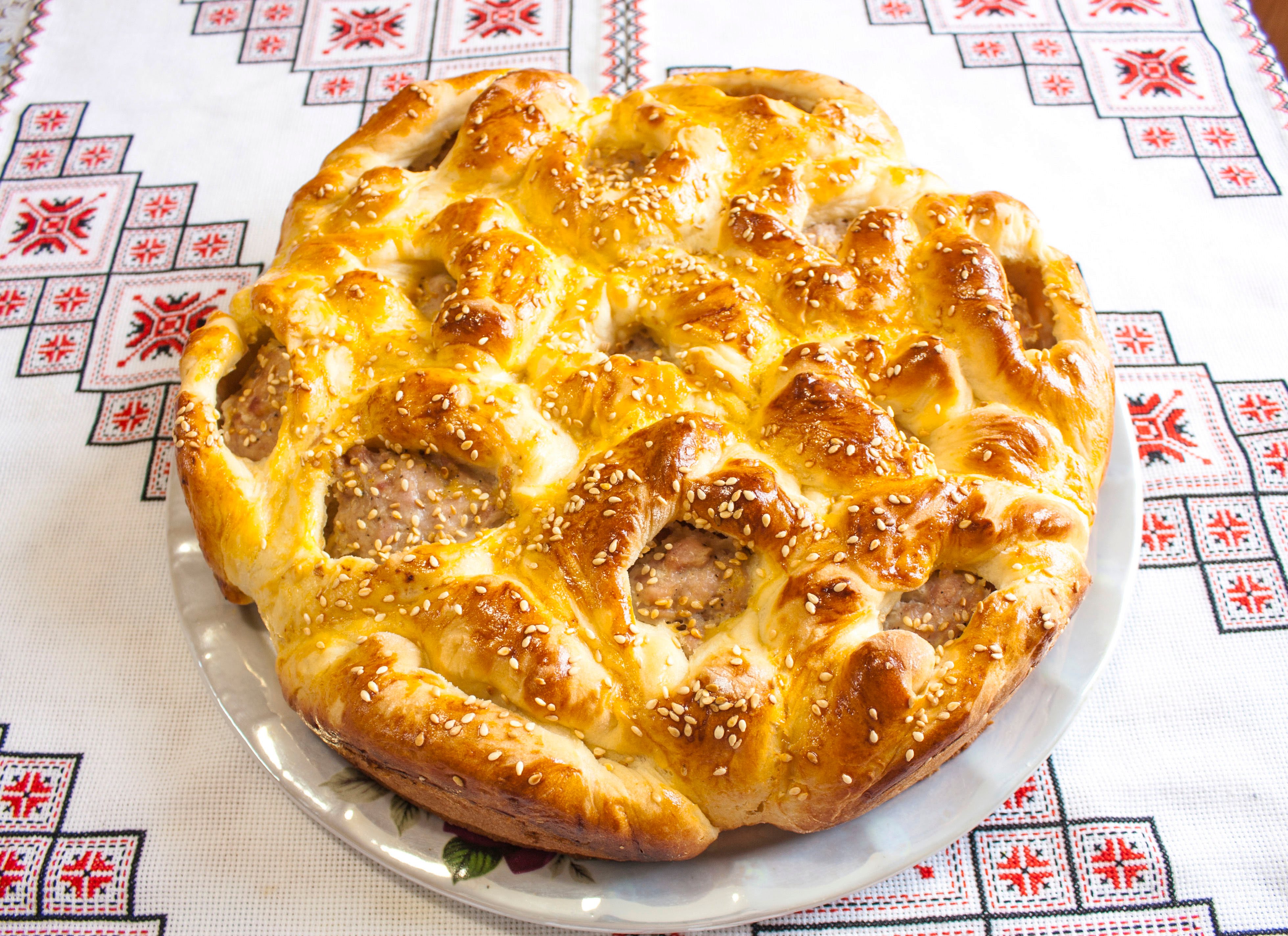 It is not surprising that they compose songs and poems about vareniki, because it is so delicious! Probably the menu of every Ukrainian restaurant offers vareniki. Varied stuffing gives everybody a chance to choose whatever he likes, and be sure you will find something you particularly like. There are vareniki with potatoes, with cabbage, with meat, with liver, etc. They are served with bacon crisps (fried in a frying pan fat and onion). Also there are vareniki with sweet stuffing: cherries, strawberries, cottage cheese, etc. Sweet vareniki shall be served with sour cream.

Bacon crisps in Ukrainian cuisine are especially delicious. In my childhood there was always a plate with a bacon crisps on the table. Finely chopped lard and onions were fried in a frying pan. This bacon crisps were a perfect supplement for almost all the meals. In particular, it is good with vareniki, potatoes and porridge. We even smeared it on bread. 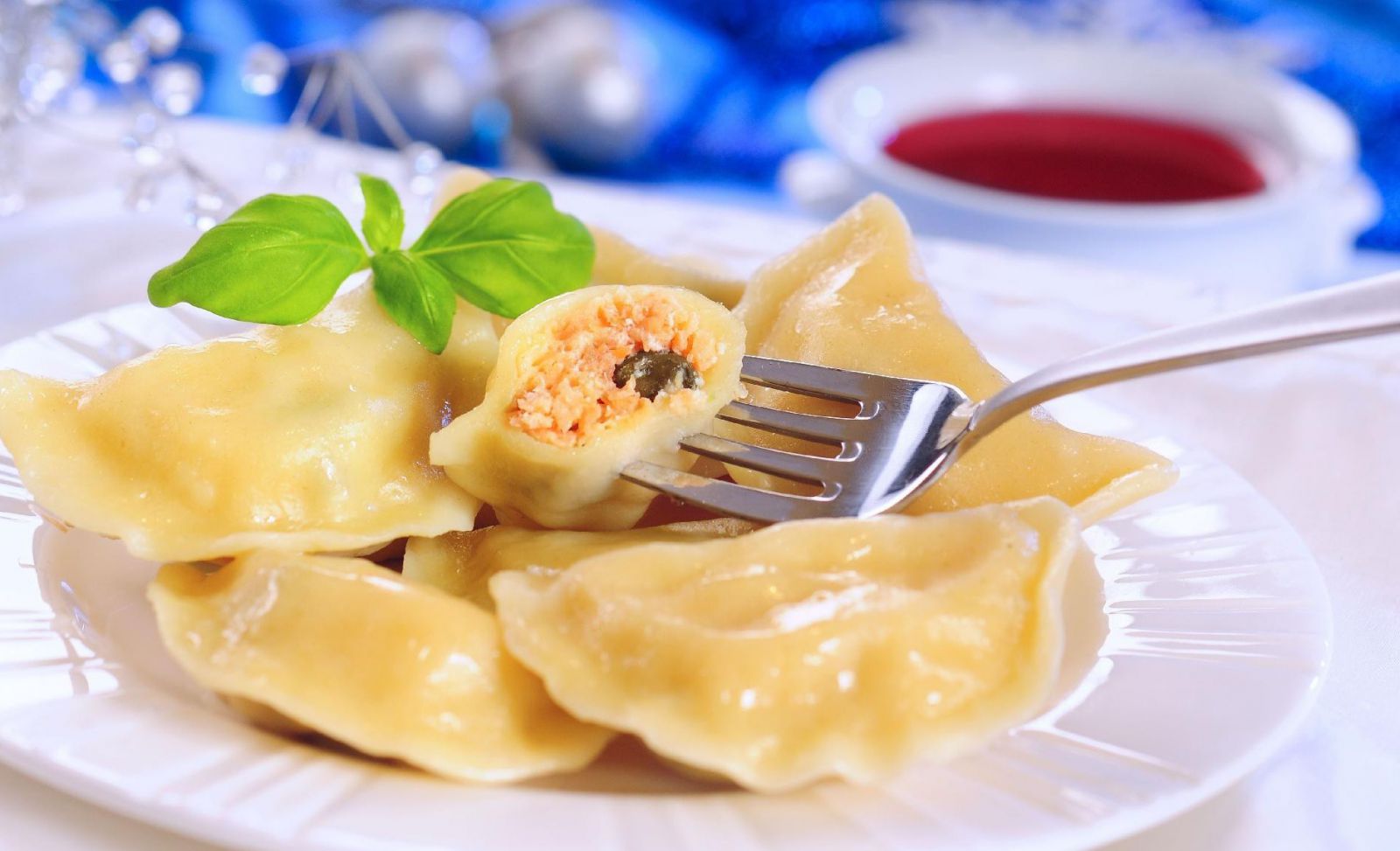 Banosh is a popular meal in the Carpathian region of Ukraine. It is made from corn flour and sour cream, seasoned with bacon crisps, mushrooms and cheese. Banosh is served hot. Having cooked the pot, you can feed all the family, because the meal is very nutritious and a small portion is enough to eat. Banosh is very caloric, it energizes for the whole day. It is interesting that they came up with idea to cook it when there was not enough food to feed the family. 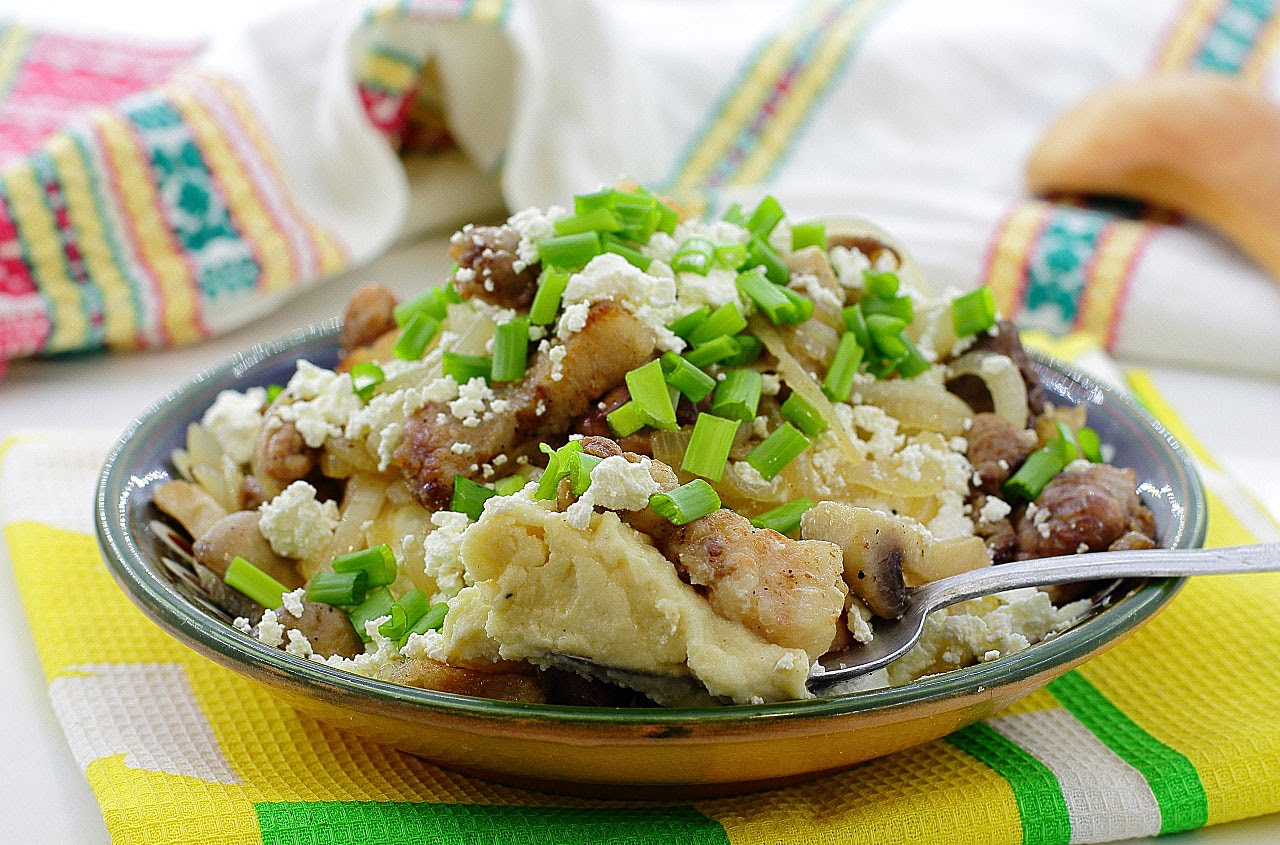 For those who like sweets, Ukrainian menu provides a wide range of baked goods: buns, tubes with condensed milk, vareniki, pies with berries and cottage cheese, cakes and kalachi.

There is often a bowl with jam, jam or honey on the tables of Ukrainians. These delicacies are smeared on bread, cookies or eaten as a snack to tea.

In my childhood, I often helped my mother in the kitchen, especially I liked baking cakes. The most popular of them: Medovik, Smetannik, Napoleon, Prague. All these are still popular.

If we speak about non-alcoholic beverages, Ukrainians prefer compote with fresh, canned or frozen berries, jelly (compote with starch addition), knot – prepared from dried apples or pears, kvass – especially popular in the summer. 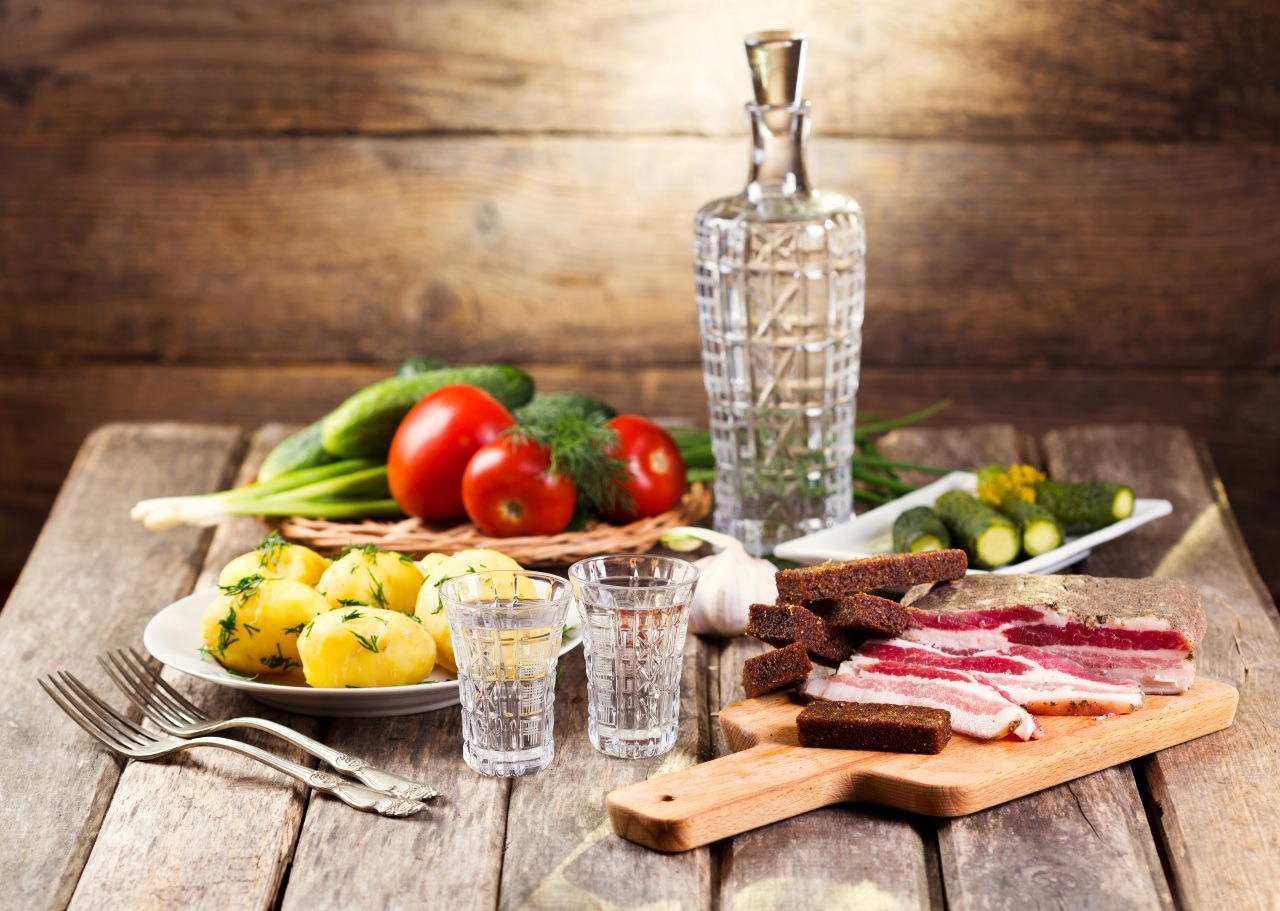 Contact Guide me UA to hire a Tour Guide in Kiev: 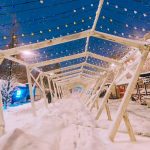 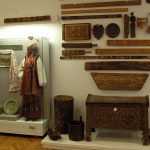