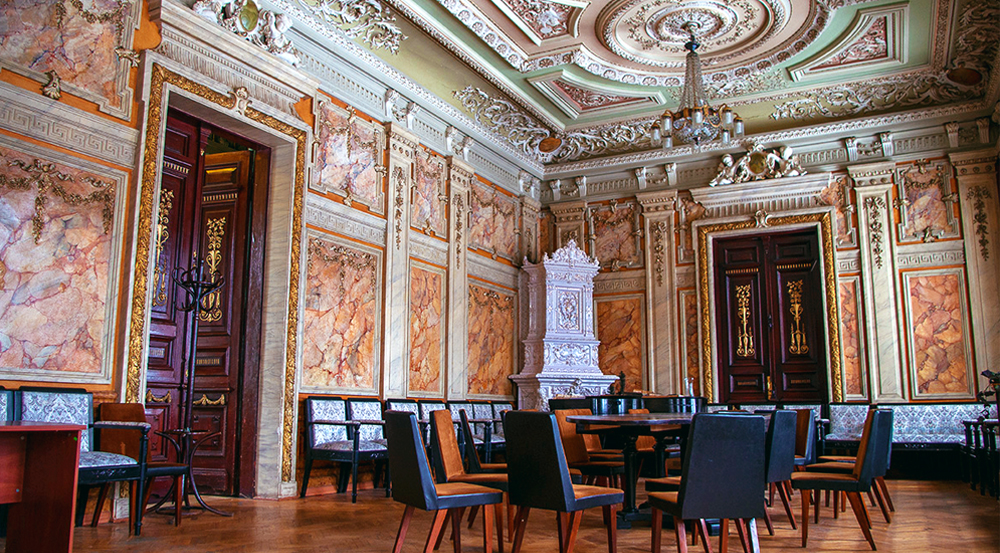 Kiev is a city with rich and beautiful architecture. Many beautiful old Kyiv mansions built in the late 18th and early 19th centuries that still adorn the city have survived in Kiev. We offer an overview of the most beautiful objects in our opinion. 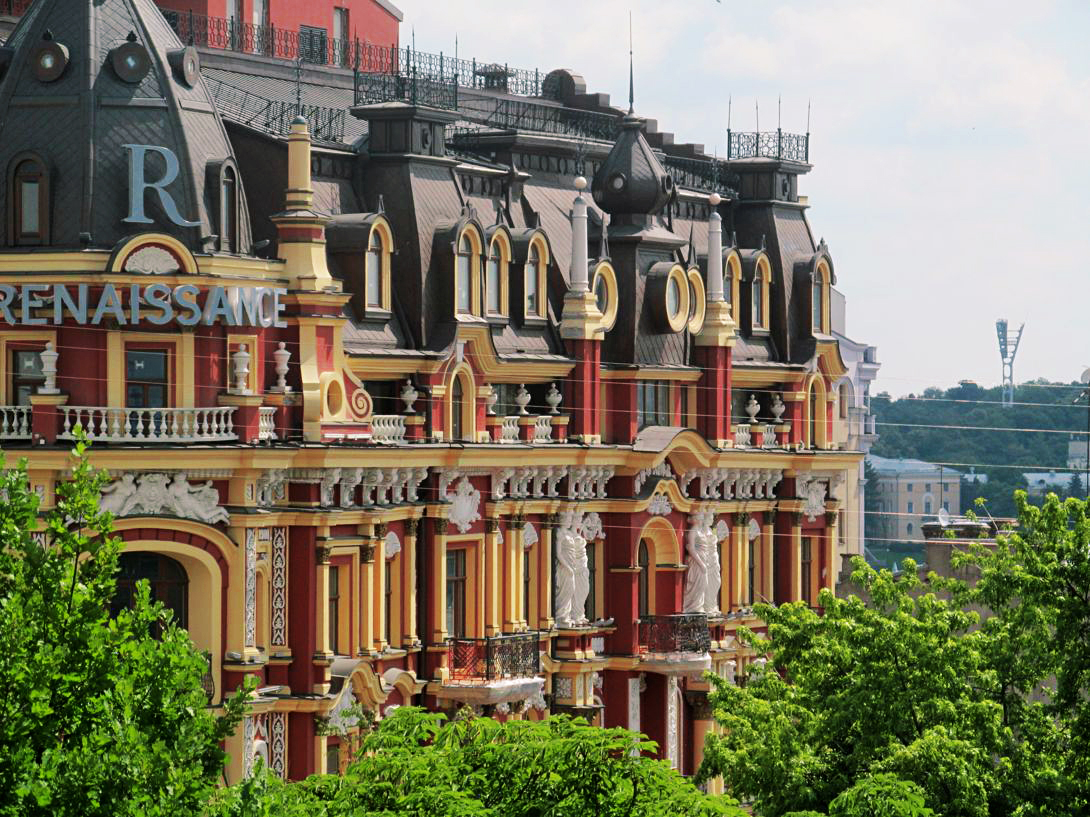 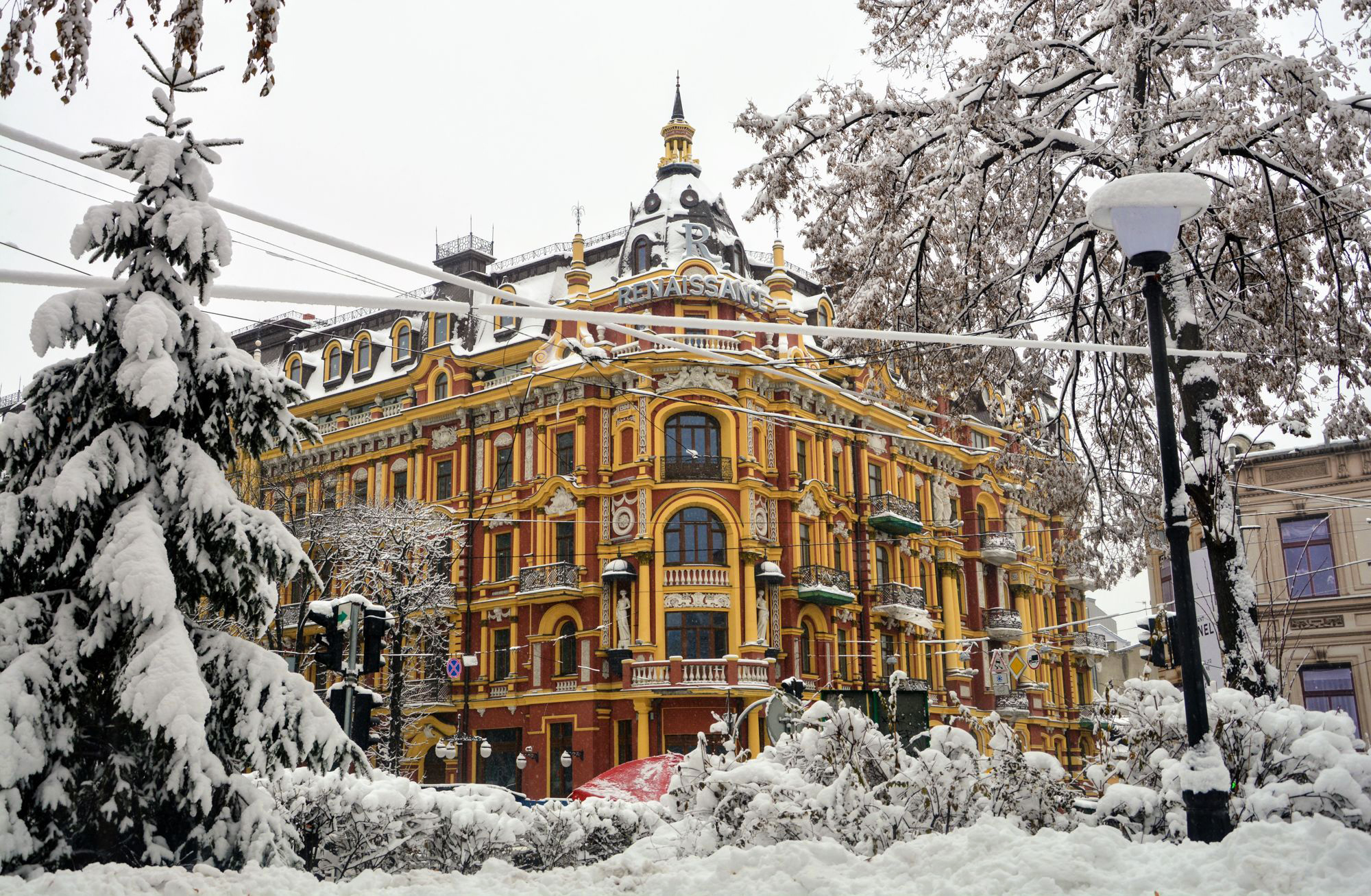 Sirotkin’s House is an architectural monument, one of the most beautiful buildings in the center of Kiev. The mansion was built in 1902 according to the project of the architect Karl Schimann in the Neo-Renaissance style. At that time, it was the tallest house in Kiev. Its height is 42.5 meters. There was electricity and elevator in the building. The mansion was built as a commercial apartment building. It housed shops, apartments, and a pharmacy. Interestingly, in his novel “The White Guard” Mikhail Bulgakov mentions the cafe “Marquise”, which was located on the ground floor of the building.

This attraction is included in the Tour of the Old Town, which is also well suited for those who are in Kiev for the first time and want to quickly see the city center.

Apartment building of Snezhko and Khlebnikova 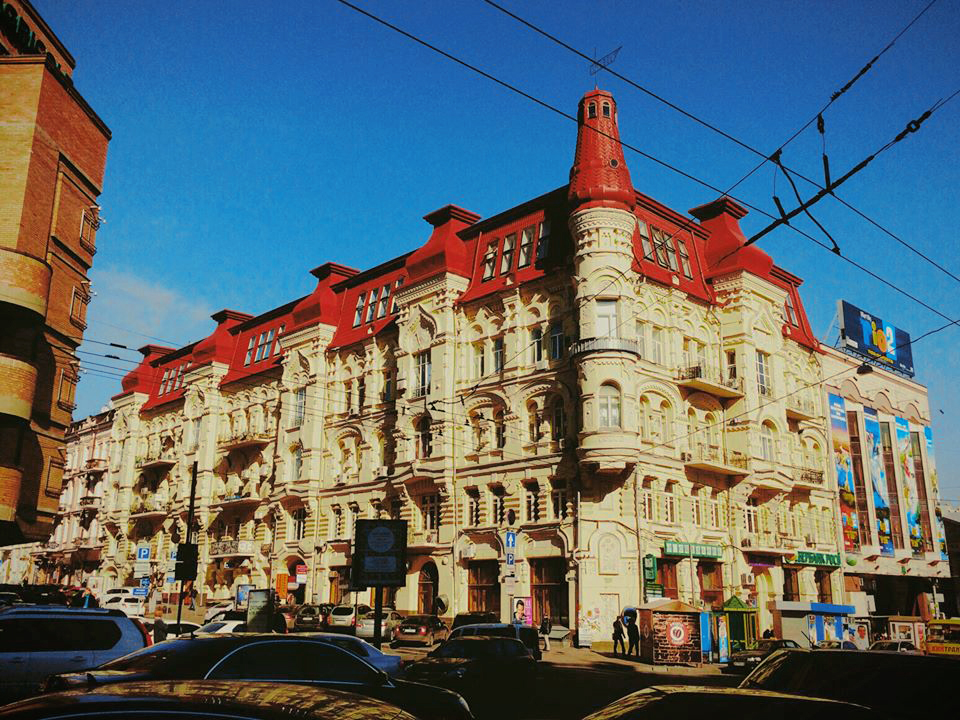 The apartment house of Snezhko and Khlebnikova, which was built in 1901, can be rightly called one of the most beautiful Kiev mansions. Architect M. G. Artynov is the author of the project. The picture of the mansion was included in the collection of postcards of the beginning of the 20th century by the photographer Dmitry Markov called “Beautiful buildings of Kiev”. The house belonged to the heirs of Adam Snezhko, who was called the “brick magnate”: Elena Khlebnikova and Sergey Snezhko.

The walls of the mansion are decorated with stucco decoration. On the ground floor of the mansion there was a grocery store, a manufactory store, and a hairdresser; apartments for rent were on the first floor. In 2000, the mansion was reconstructed.

Cradle of the Spirit 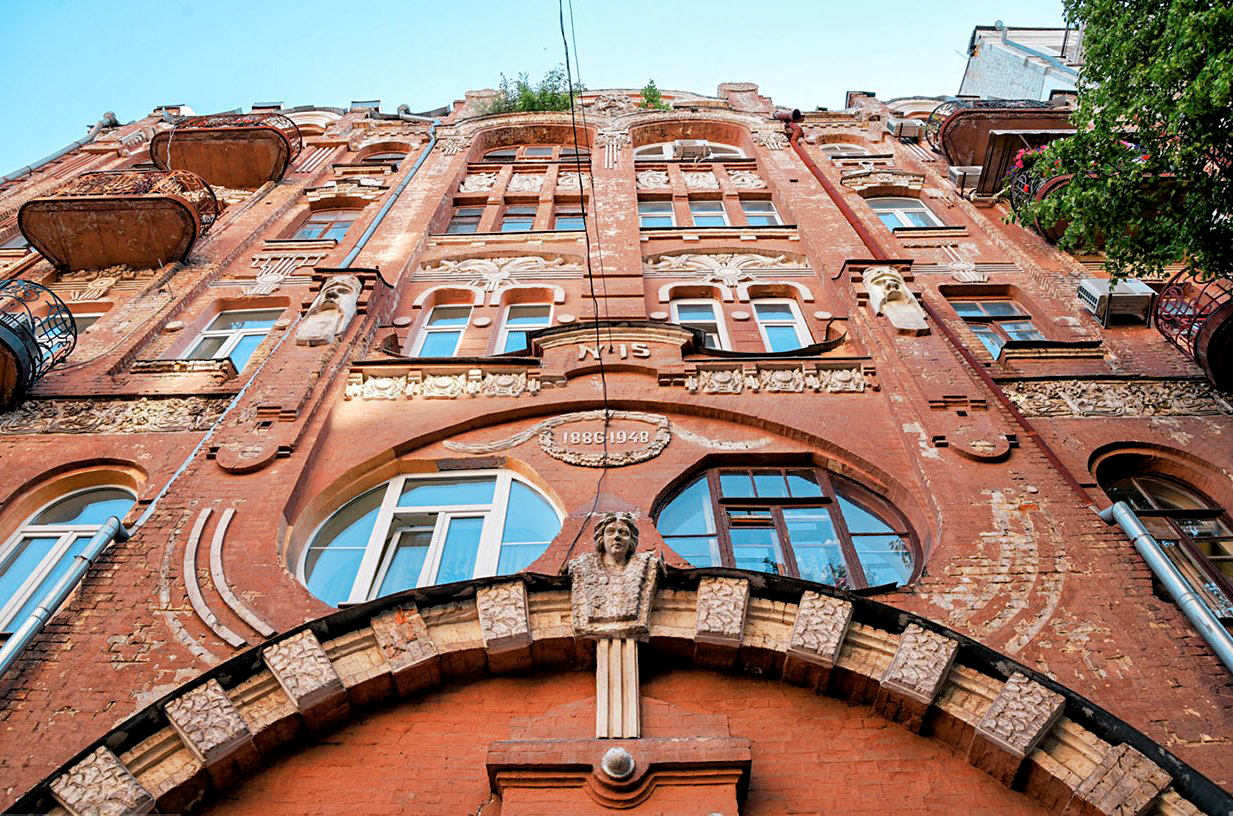 The Cradle of the Spirit is an old Kiev mansion, designed by E.P. Bradtman in 1888. This is the very first house in the Russian Empire, which was built in the Art Nouveau style. It was built as a tenement house on the territory of the former estate of Mering. In the house, you can see round and rectangular windows; the front facade of the house is decorated with floral patterns. The mansion is decorated with the mask of Chronos, the head of Rhea, the heads of the Caribants. According to scientists, the myth of Ancient Greece about Chronos and Zeus is encrypted in the home decor. Today, some decorative elements of the house are destroyed. 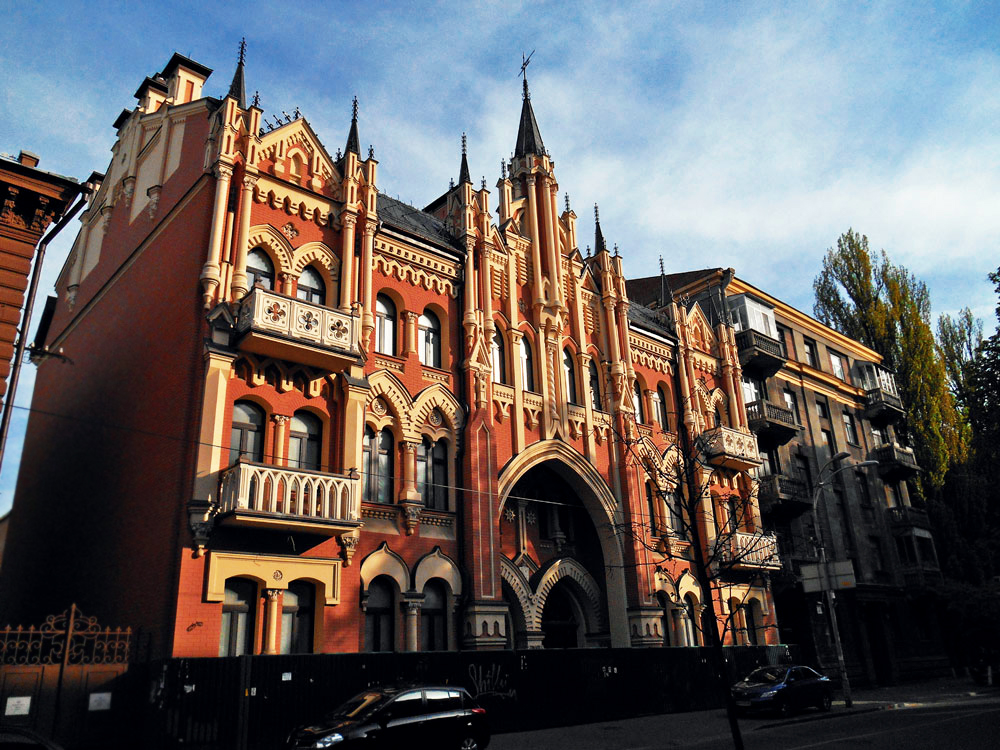 The Ikskul-Hildebrand mansion, or as it is also called the “Gingerbread House”, is considered one of the hallmarks of Kiev. It was built in 1902 according to the design of N. Vishnevetsky in the Neo-Gothic style. The mansion belonged to the barons of Iskul-Hildebrand. The house had six five and seven bedroom apartments, which were rented out. In the courtyard, there was a laundry room, barns, stables and a cellar. The three-story house is decorated with various architectural elements, gabled towers, arcbutans and hanging columns. The house has narrow elongated windows. Externally, the mansion resembles a fairy tale house. In the 2000s, restoration work was carried out in the mansion. Now it houses a private company. 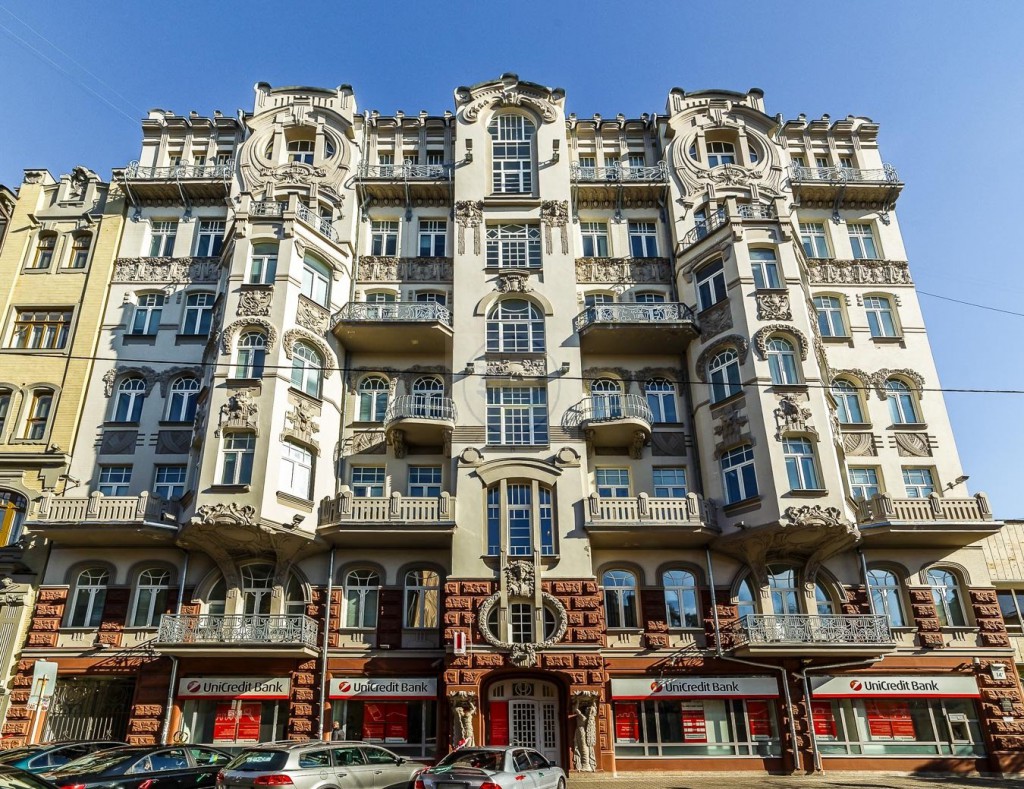 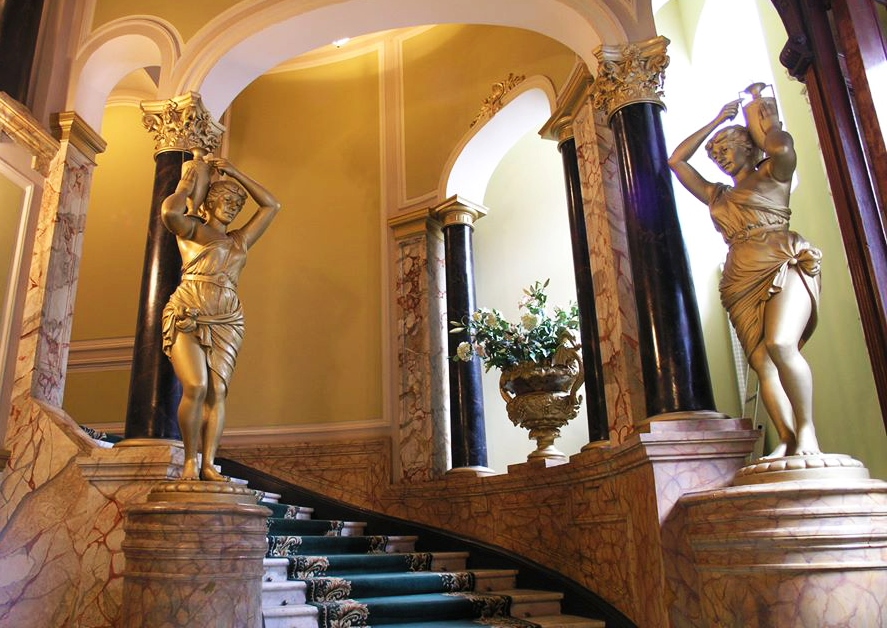 On Yaroslaviv Val Street, there is another beautiful old Kiev mansion, which was built for Colonel Leonid Rodzianko. He lived in this house with his family, and some of the apartments were rented out. The mansion was built in 1910. The facade of the building is decorated with sculptures of nymphs, masks of men, and the initials of L. Rodzianko. The interior of the mansion still has its palace splendor: the “Italian courtyard”, large halls with marble stairs, antique columns decorated with wall molding. Today, the building hosts the performances of the Suzir’ya Theater.

This attraction is included in the Full Day Tour, which is also well suited for those who are in Kiev for the first time and want to explore the most interesting sights. 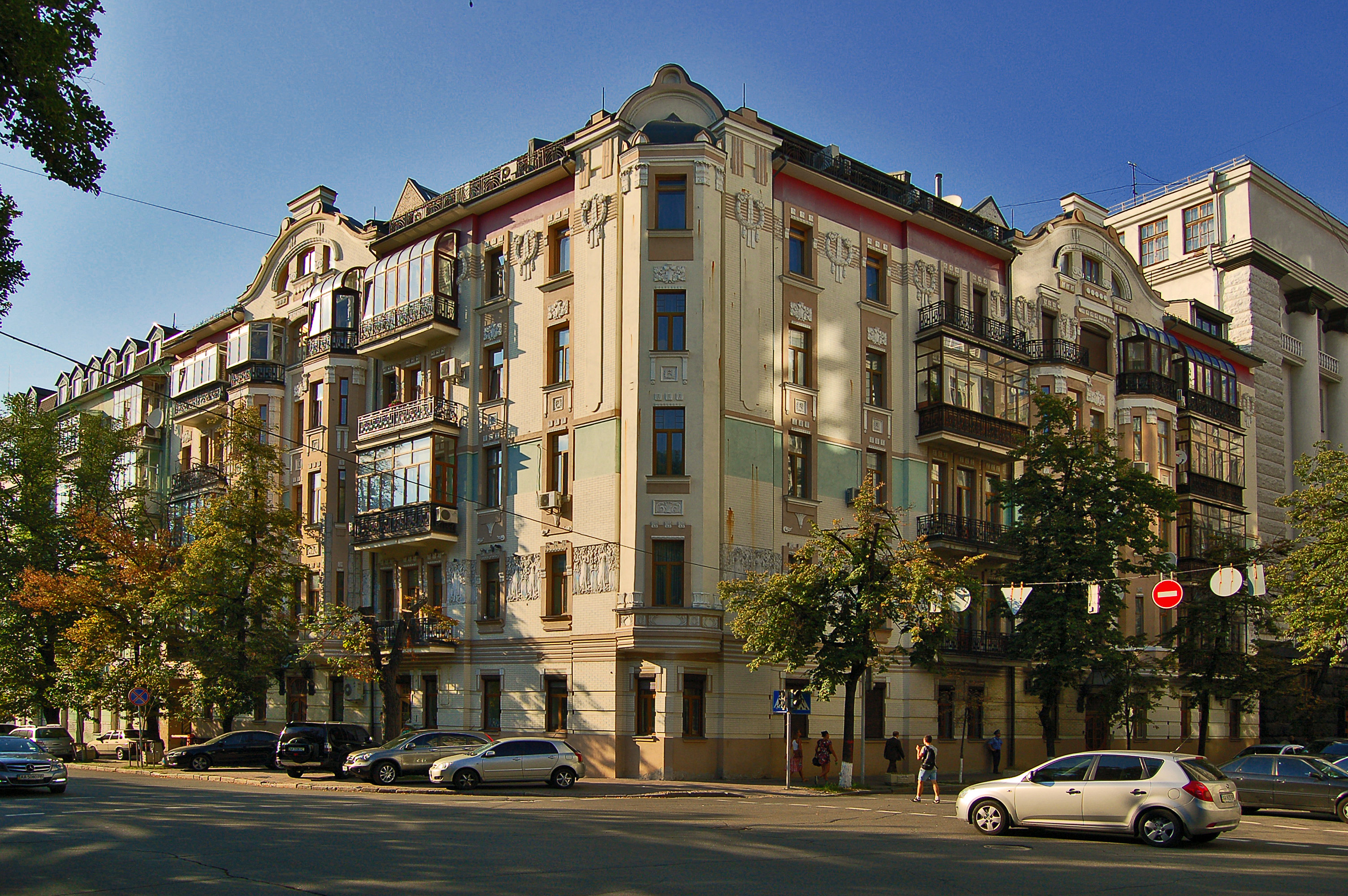 The Schleifer Mansion is considered an architectural monument. It was built in 1909 by G. Schleifer. He and his family lived in this house and rented out apartments. A doctor of medicine M.K. Neilov lived in the house. Initially, the mansion was two-storied, and next to it was an adjacent five-story house. In total, there were 24 apartments in the house. The living room was decorated with a glass ceiling. In the Soviet years, the headquarters of the Communist brigade and the headquarters of the anti-fascist organization Arsenalets were in the mansion. 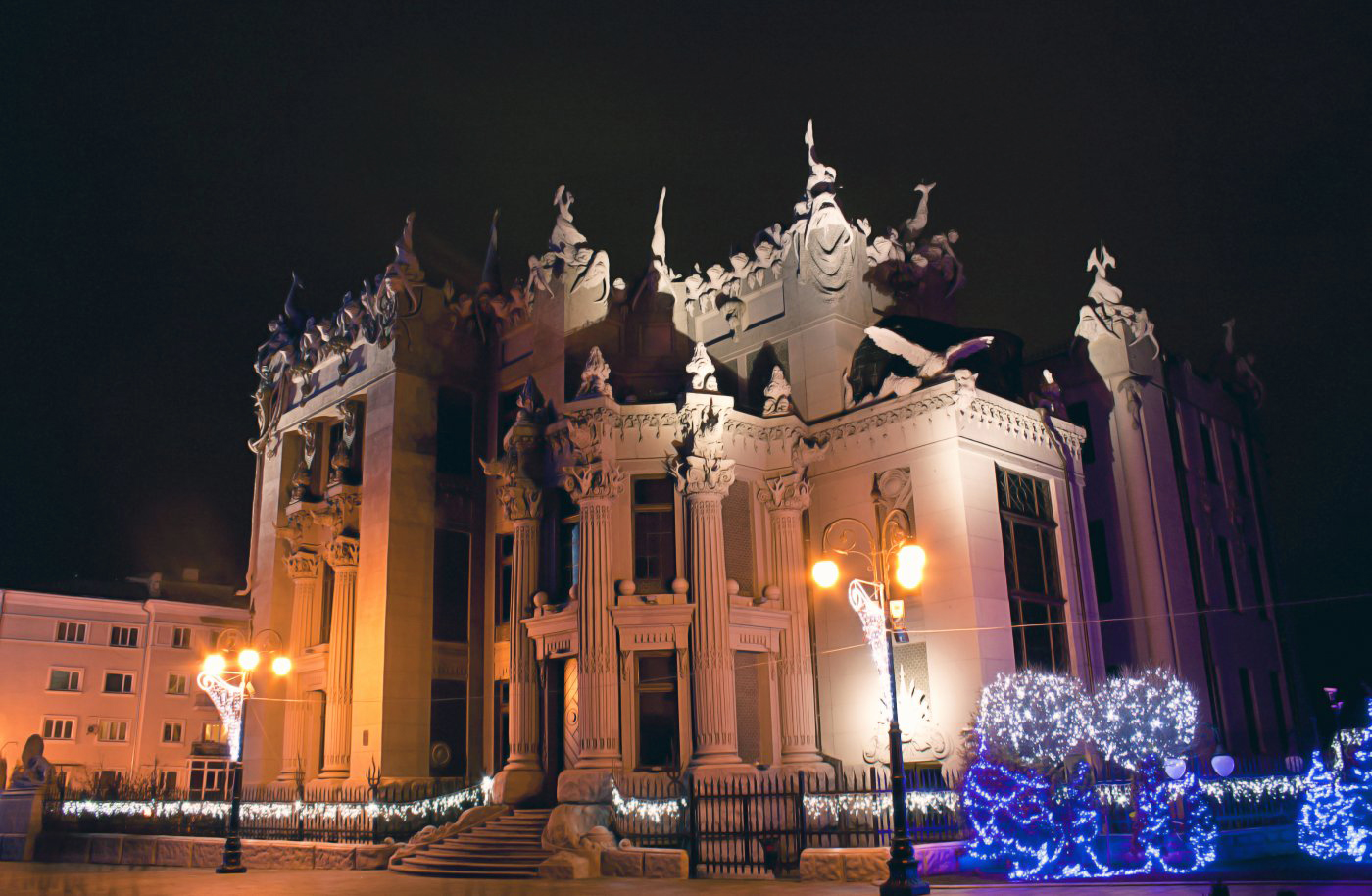 Our list of beautiful old mansions would not be complete without one of the most beautiful and mystical Kiev buildings, the House with Chimeras. The house is decorated with sculptures of mythical creatures and animals. In 1903, the architect Vladislav Gorodetsky builds a mansion in the Art Nouveau style from cement, which in those years was not yet used in construction. He and his family lived in this house and rented out apartments. The total area of ​​the mansion is 3300 m2. The rooms are fan-shaped, in the direction of the sun. On the ground floor, there were stables, laundries, and rooms for servants. On the second floor, there were living rooms, a kitchen, a buffet, and bathrooms. The third floor was occupied by residential apartments. Gorodetsky lived in the largest thirteen rooms’ apartment. Take the Full Day Tour by Guide me UA to see this beautiful attraction. 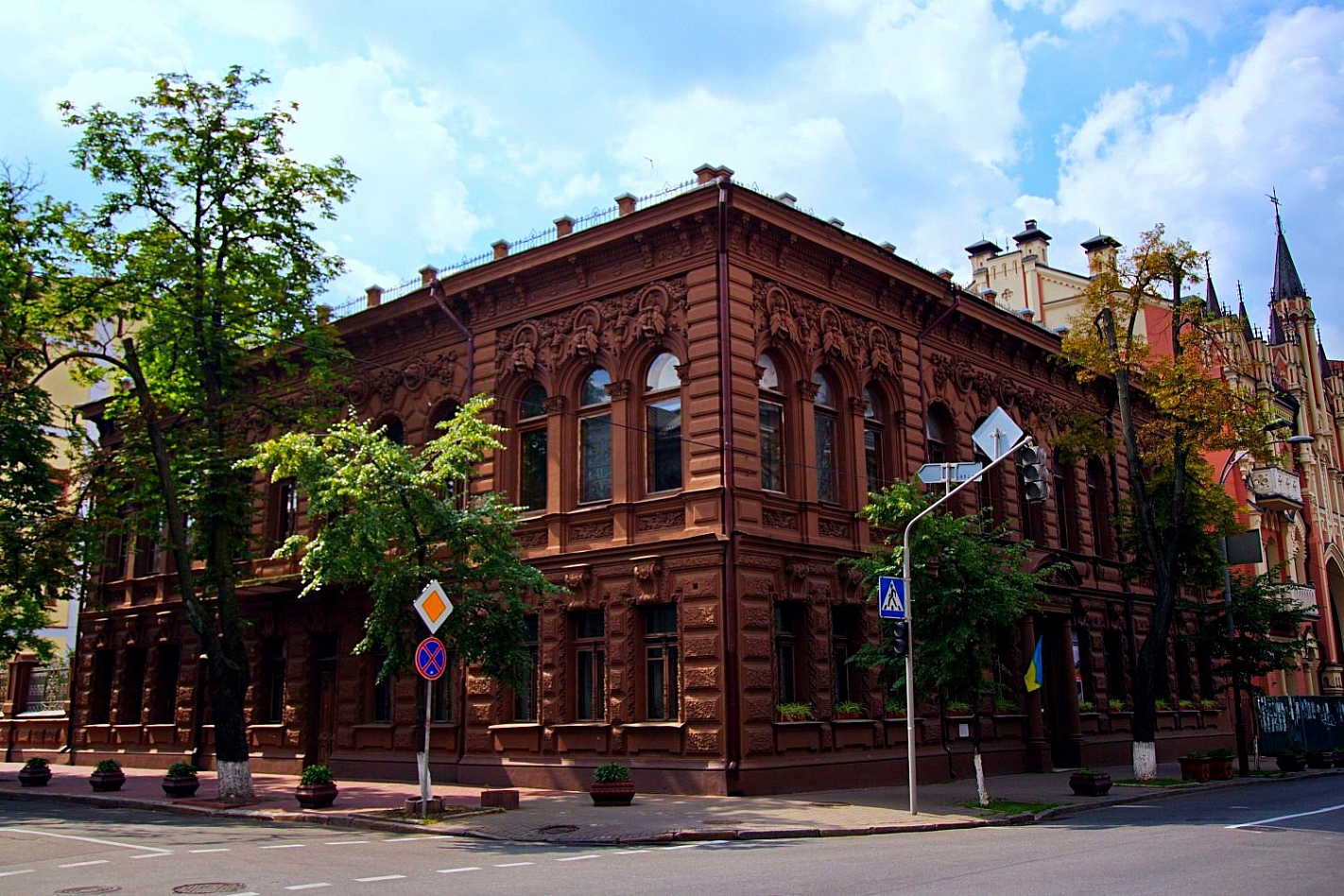 Another Kiev landmark is Chocolate House, which is located near the Gingerbread House. The mansion was built in the Renaissance style in 1901. The Chocolate House belonged to S.S. Mogilevtsev. The house is beautiful both externally and internally. The building is decorated with stained-glass windows, lamps, tiled stoves, and window fittings. The walls were sculpted, the ceilings are painted. The floors are connected by a wooden staircase. Wooden doorframes and curtain rods are also of artistic value. Famous scientists and philosophers lived in the Chocolate House, among them: Germayze Osip Yuryevich, Kistyakovsky Igor Alexandrovich, Makarenko Nikolay Emelyanovich, Rakovsky Christian Georgievich, Yavorsky Matvey Ivanovich.

The mansion of Jacob Polyakov 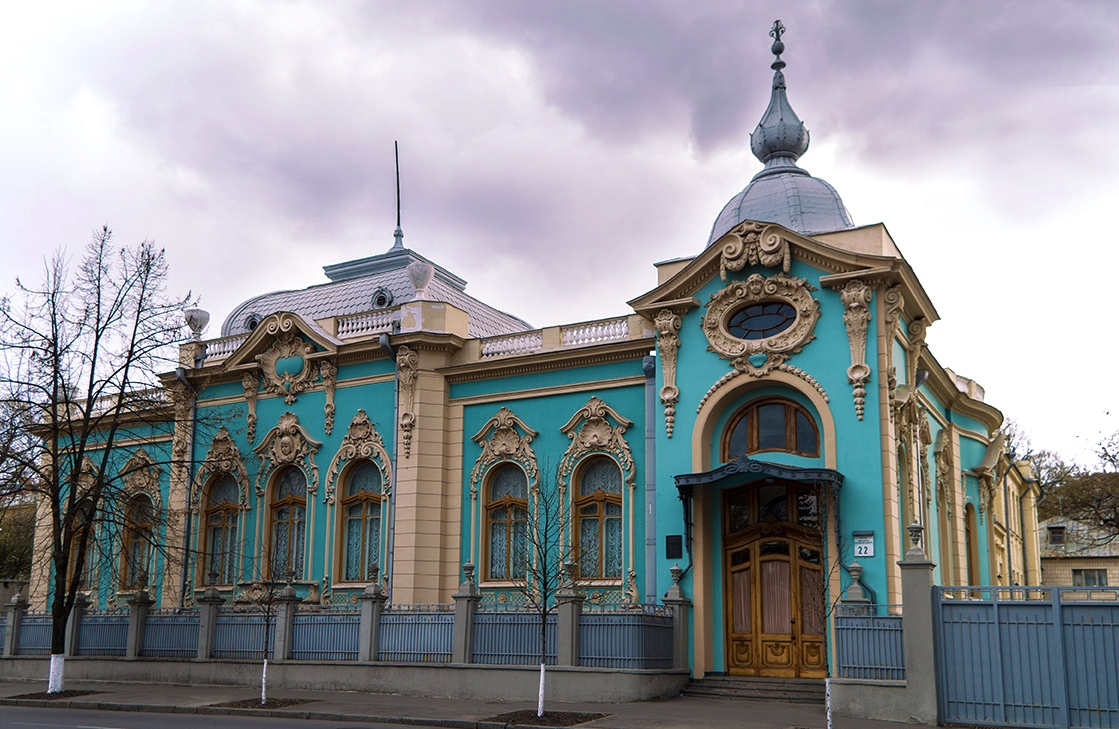 Another beautiful old Kiev mansion is the House of Jacob Polyakov. It was built in 1910 according to the project of architect F. Troupiansky. It is considered a monument of architecture. It looks like the Mariinsky Palace, which is located nearby. Therefore, it is unofficially called the “Small Mariinsky Palace”. The turret with a spire decorates the mansion. The mansion is painted in turquoise color with white stucco molding. It has one and a half floors. N.P. Popov also lived here, then the mansion was nationalized by the Bolsheviks. During Getmanat, the Ministry of Finance was located in the mansion, then the Central Committee of the Communist Party of Ukraine, and later the Chamber of Commerce. In Soviet times, the building hosted government receptions. 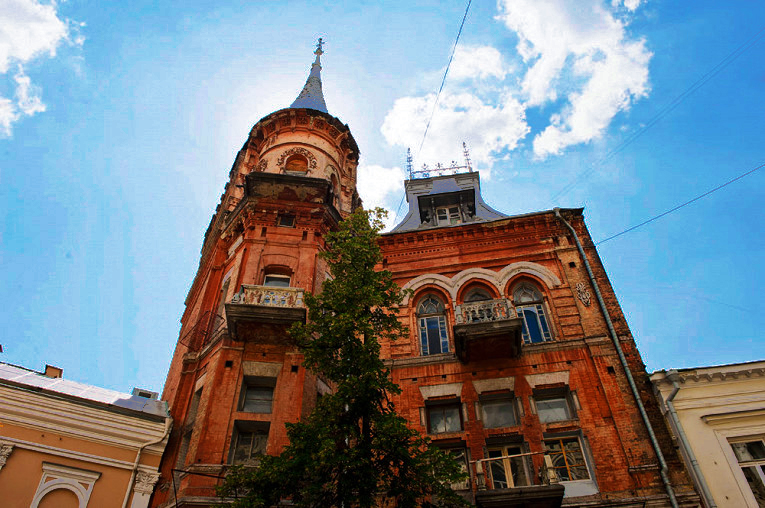 Baron Castle or the Podgorsky House was built in 1898 in the Neo-Gothic style, and was designed by N. N. Dobachevsky. It is considered a monument of architecture. The landowner Mikhail Podgorsky lived in the mansion. There are 10-room apartments on the second and third floors. There were also rooms for servants. The mansion was richly decorated: there were a staircase with alabaster curly balusters and ceilings with stucco molding. In the Soviet years, the Institute of Traumatology and Orthopedics was located in a mansion. Now the building needs reconstruction, but it is constantly being postponed due to lack of funding. This sight is a part of Old Town Tour of Kyiv. 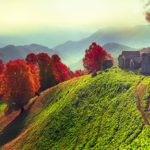 20 Most Interesting Places around Kyiv that are Worth Seeing 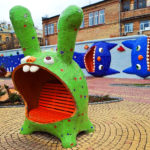